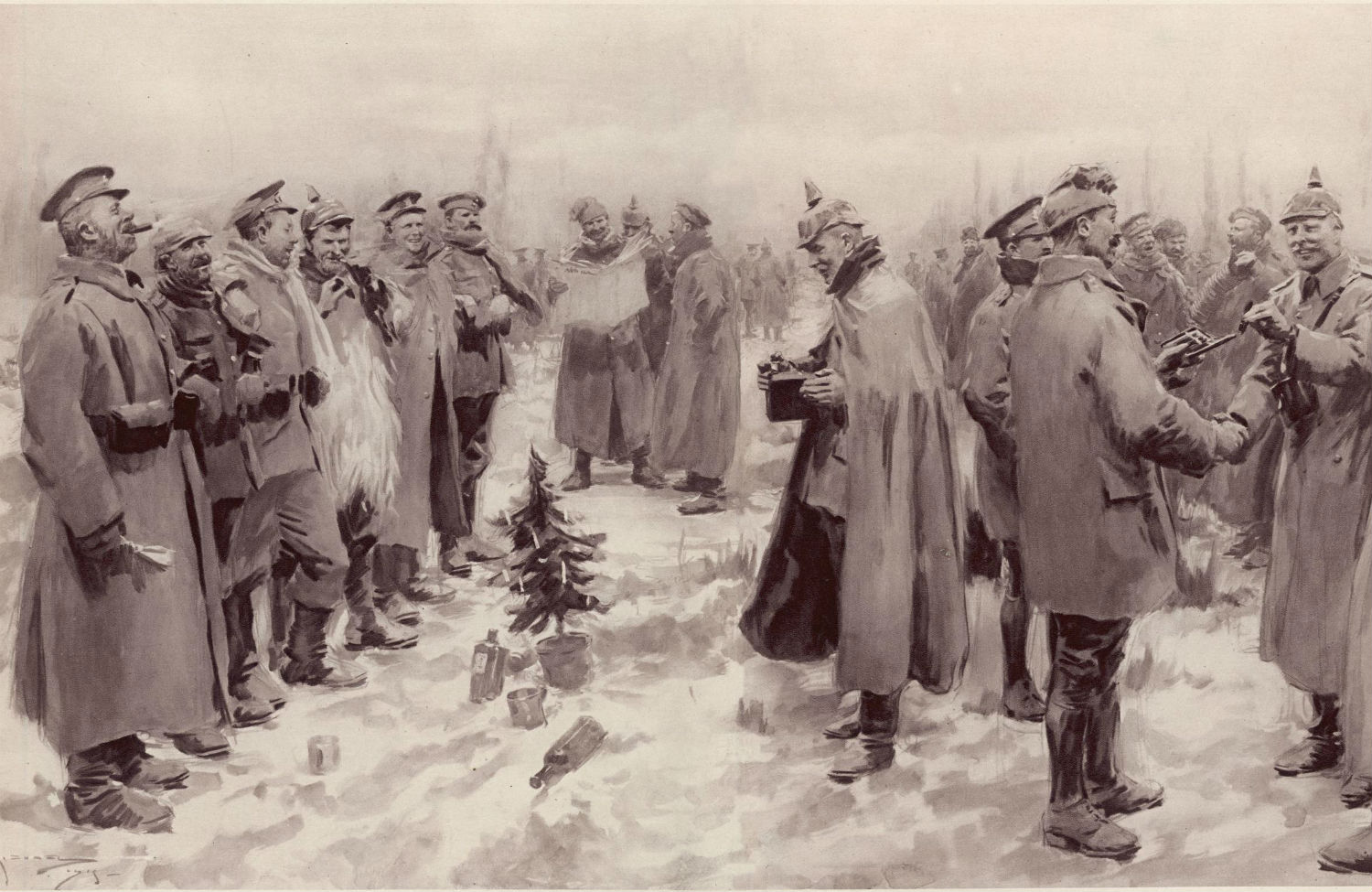 100 years ago, on Christmas Day, 1914, in the middle of World War I, British and German soldiers put down their guns and stopped killing one another. The terrible industrial slaughter had already taken the lives of hundreds of thousands of young men. But on that day, thousands of troops climbed out of the trenches in France and Belgium, sang Christmas carols, and exchanged food, gifts, and souvenirs. They traded German beer for British rum. They even played soccer. It’s a unique event in the history of modern warfare.

It’s unique in another way. Those who fought in wars—“the fallen”—are regularly remembered and honored, but remembering and honoring those who refused to fight is pretty much unheard of (except for commemorations sponsored by pacifist and anti-war groups). And yet, this season, the Christmas Truce of 1914 is being commemorated officially, especially in Europe, with a wide variety of government-sponsored memorial events.

“It’s quite remarkable,” Adam Hochschild said in an interview—he’s the author of seven books, most recently the award-winning history of WWI, To End All Wars: A Story of Loyalty and Rebellion, 1914–1918. “The Christmas Truce has always been marked unofficially. But this year every school in the United Kingdom received a packet of materials about it—photos, eyewitness accounts, student worksheets. There’s a children’s competition in Britain to design a memorial to the Christmas Truce, and one of the judges was Prince William. In Belgium a memorial soccer field was inaugurated, the British and German ambassadors came, and they are holding a soccer tournament in memory of those Christmas Truce soccer games, with youth teams from Britain, Germany, France and Austria.”

Perhaps most amazing is the three-minute TV commercial running in Britain, featuring a high-budget reenactment of the truce, where, after a soccer game, a British soldier trades a chocolate bar with a German soldier. “It’s from the supermarket chain Sainsbury,” Hochschild said. “The commercial is for a commemorative chocolate bar. The proceeds from this chocolate bar will go to the Royal British Legion, the official veterans’ organization. It’s another kind of official commemoration of this startling outbreak of peace.”

What is it about this refusal to fight that makes it safe to be officially commemorated? “I’m curious about that,” said Hochschild, who wrote about the Christmas Truce for TomDispatch. “First of all, the Christmas Truce only lasted for a day or two. The war in its full fury resumed very quickly—and went on for another four years.

“Also the Christmas Truce did not represent a breakdown of military discipline. It was sanctioned by officers on the scene. Officers as high-ranking as colonels came out to greet their counterparts from the other side in no-man’s-land.”

Hochschild points to one additional factor: “Commemorating anything these days can be big business. First World War tourism in northern France and Belgium is a huge industry. In Belgium alone, the government of the Flanders region is investing $41 million in new tourist facilities for this four-year commemorative period. That’s not counting private investment. I’m sure they are thinking, ‘if we can add a few peace sites to the existing war sites, so much the better.’”

The other profit-making industry that’s gotten involved is professional soccer. “It’s a huge business,” Hochschild says, “particularly in Europe. Five of the ten most valuable professional soccer teams in the world are in Great Britain, and it’s no accident that the trade association for professional soccer is one of the groups financing this packet of information going to all the British schools. The European soccer association is sponsoring the tournament in Belgium.”

But there are no official celebrations of many other events where soldiers refused to fight in World War I—the more radical and subversive acts. Hochschild lists several of these acts—of fraternization, desertion and even mutiny—that occurred later in the war: In the spring of 1917, after the Russian revolution, photos show Russian and German troops celebrating and dancing together in couples; on the Eastern Front, a million Russian soldiers deserted and simply walked home, and German soldiers began deserting in 1918; and in 1917, hundreds of thousands of French soldiers refused orders to attack. “These folks should all be celebrated,” Hochschild says, “because they helped bring the war to an end.”

Finally, Hochschild says, we ought to celebrate the anti-war leaders who opposed the war from the beginning and paid a heavy price: in Germany, Rosa Luxemburg spent more than two years in prison for opposing the war; in Britain, Bertrand Russell served six months in a London jail for his anti-war advocacy. And in the United States, Eugene V. Debs was imprisoned for urging resistance to the draft; he was still in the Atlanta federal penitentiary in 1920, two years after the war ended.

Now the US government is planning an official commemoration of the 50th anniversary of the Vietnam War. It’s being organized by the Pentagon, which has declared the purpose to be “to thank and honor veterans of the Vietnam War…for their service and sacrifice.” But more than 1,000 people have signed a petition insisting that “no commemoration of the war in Vietnam can exclude the many thousands of veterans who opposed it, as well as the draft refusals of many thousands of young Americans, some at the cost of imprisonment or exile.” Anti-war activists “are the real heroes that period,” Hochschild says, “and we have to be sure to remember and celebrate them.”