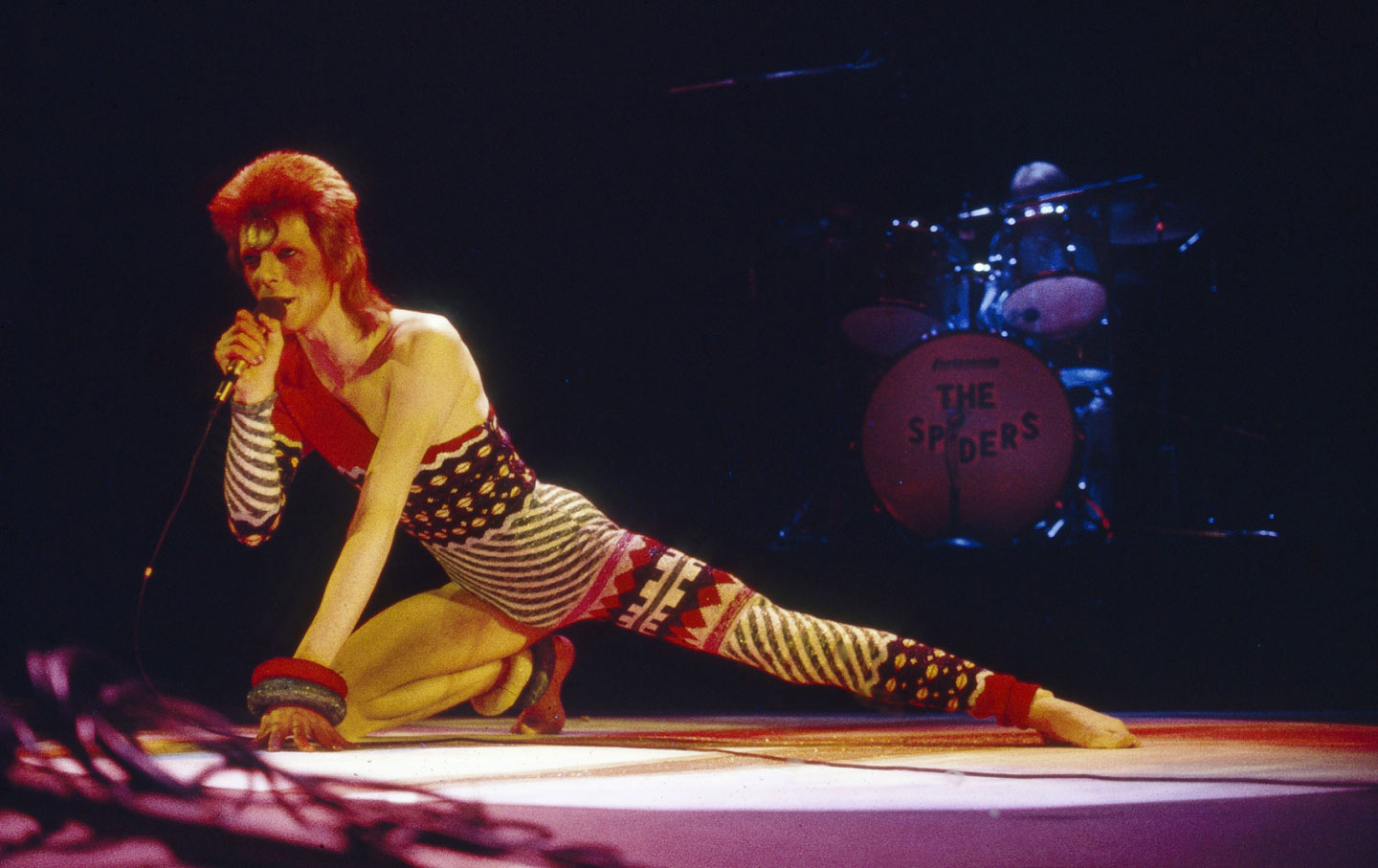 David Bowie in concert at the Hammersmith Odeon, 1973. (Rex Features via AP Images)

I never saw David Bowie perform in person. I’m not even sure I watched him on Top of the Pops. So why, at his death am I so damn grief-stricken? I think it’s because he hovered, always, like a friendly protective ghost over me, breathing life.

“Ground Control to Major Tom…” I wasn’t yet 10 when “Space Oddity” came on the radio, breaking up the bland and tuning me into the possibility of something else. “Sitting in a tin can….” I was surrounded by girls who seemed to know just how to be girls, and boys who didn’t seem to have to think about much at all.

Not swooning in swinging London, I didn’t love the Beatles. I bought Abbey Road and listened, dutifully, but those boy-girl scenarios moved me not one bit. It was Bowie that set off my silent inner squeal.

“Wake up Wake Up you Sleepy Head…” Over a landscape of creepy Alice Cooper guys and weedy ABBA women, Bowie sprinkled stardust. Hunky Dory was in the air as I got my period, lost my dad, and I was beginning to think I was alone on the planet.

Bowie left enough room in his melodies to think in.

A baby-dyke, breasted and bleeding, my body was a liability, clearly. I didn’t fancy my chances of being able to be a full person, and smart, and female, if I was also visible. So I covered up. I might have buried myself forever beneath a mountain of jumble-sale sweaters, if Bowie hadn’t hovered.

“A crack in the sky and a hand reaching down to me…” Seen and also seeing; smart, not-silent, not macho, and also not prey; Ziggy was powerful in all that both-ness. Perhaps I was a Golden One?

Against a tide of nihilism, I went searching. Rejection was in and the lovey-dovey dreaming of the sixties was out, but Bowie left enough room in his melodies to think in, and his lyrics reached out with humor and promises.

“Will you stay in our lovers’ story? If you stay you won’t be sorry. ’Cause we believe in you.”

It’s not that my budding leftie self heard an agenda in his song to his newborn son (“Kooks”), but Bowie’s take on alienation was different: He hovered at a distance, but he didn’t detach.

By the late ’70s, I was a punk-rock wannabe. I wanted to love punk. I was down with all that championing of the common man and dissing the monarchy. I liked the black outfits and boots. But, while the Sex Pistols were calling out the bollocks, my punkiest girl friend got raped. It wasn’t pretty. I felt no love.

Meanwhile, Bowie was off being sexy. In Berlin, all cool, cheekbones, and Kraftwerk sharp. I didn’t know if I wanted him or wanted to be him. Both, of course. Come the eighties, I was a young American. Let’s Dance! Bowie wrote music to strut by, and boy, did this boy-girl Brit-in-New York City dance.

Bowie’s glint had helped light my passage. From then on, Grace Jones, Annie Lennox, Siouxie and the Banshees, Patti Smith, and the Joans—Armatrading and Jett—edged him out.

I don’t know why I didn’t see him perform in The Elephant Man. I can’t explain that.

It was about a decade ago that I passed Bowie with Iman on my street and felt that same inner squeal leap in my 40-something-year-old chest.

I saw Lazarus as soon as I was able. Alone in the third row, the last ticket left, one rainy night last fall at the New York Theater Workshop. I left befuddled, but in a Bowie way; pulled in again, to face the strange—now the faux frontier between life and death. The “stream of warm impermanence” he’d written about so long ago in “Changes” feels less warm now. The dust is still starry, but black.

People are making a lot now of the lyrics. “Look Up. I’m in Heaven,” says the man who fell. Has he finally left the earth? But of course, I’ve always looked up for Bowie. Where else would our space friend hover?