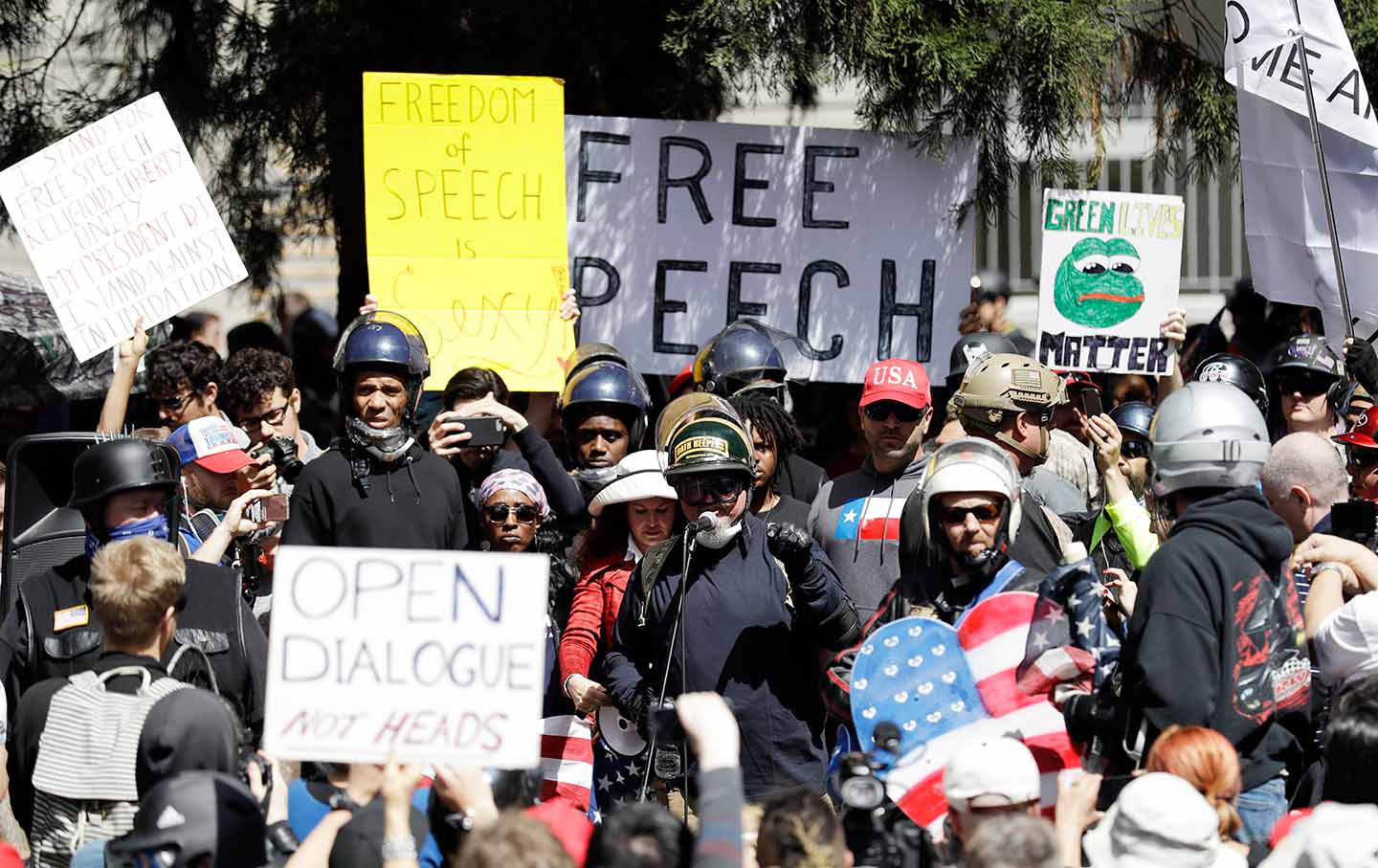 A free-speech rally at the University of California, Berkeley, in April 2017. (AP / Marcio Jose Sanchez)

In May, a new nonprofit group called Speech First sued the University of Michigan in federal court over its speech code, which it claims has a “chilling effect” on young Trump supporters.

Speech First wants the university to ban any investigation into campus harassment, bullying, and “bias-related misconduct.” It argues that these terms are defined so broadly that they restrict the free speech of campus conservatives. The university’s speech code, the group contends, belongs in “communist China.”

The group also wants Michigan to prevent its “Bias Response Teams,” made up of staff who report and respond to discrimination claims such as white-supremacist leafleting and racist graffiti, from doing their job. The “mere threat of being investigated” by the teams, the organization says, causes students “to err on the side of caution before expressing an opinion that could cause someone to take offense.”

“What if students who wanted to stand up for free speech on campus were supported by like-minded students from all over the country?” the organization asks on its website.

From statements like this one, it’s easy to assume Speech First is a grassroots, student-led organization. It calls itself an “association of students, parents, faculty, alumni, and concerned citizens from across the country who’ve had enough, and who want to fight back.” Inside Higher Ed calls it a “watchdog group.” The New York Times calls it a “student group.”

But Speech First looks like something else: a highly professional astro-turfing campaign, with a board of former Bush administration lawyers and longtime affiliates of the Koch family. The group is new to the campus culture wars: It incorporated in December and launched in February. But it has already received endorsements from the Department of Justice, which filed a statement of interest supporting Speech First in the Michigan case, stating in a subsequent press release that “freedom of speech and expression on the American campus are under attack.”

In a phone interview last month, Speech First President Nicole Neily said no students were involved in founding the group. She said that its $5 lifetime membership dues—a requirement for the group to take up a student’s case in court—make up a “negligible part” of its funding, which mainly comes from undisclosed backers.

Neily declined to say whether the Kochs were involved with Speech First. Nonetheless, Speech First’s board of directors includes a former head of a Koch-backed trust and two conservative attorneys from Koch-funded programs. The nonprofit retains prominent conservative legal and public-relations firms, and it’s renting a suite in a top-dollar downtown-DC office building. These kinds of services don’t come cheap. What’s more, the billionaire brothers have been known to concern themselves with campus politics before.

Neily herself is a senior fellow and former executive director at the Independent Women’s Forum (IWF), a conservative non-profit. IWF has received Koch funds directly, and its backers include DonorsTrust and Donors Capital Fund, nonprofits whose biggest donors are the Koch brothers. A Mother Jones investigation called DonorsTrust “the dark-money ATM of the conservative movement”: It’s funded anti-immigrant groups NumbersUSA and the Center for Immigration Studies, abortion opponents like the National Right to Life Committee, the troubled Priests for Life, and the NRA Freedom Action Foundation.

Speech First’s lawyers in the Michigan suit are Consovoy McCarthy Park, a top conservative firm that’s also representing Donald Trump and working to defund Planned Parenthood in Kansas. Speech First’s public-relations firm, Creative Response Concepts (CRC), “is one of the first entities that is called whenever there is a major public policy initiative for most conservatives,” former contractor Kellyanne Conway told The Washington Post in 2009.

Office space at Speech First’s Washington, DC, address costs about $56 per square foot. Even the real estate it occupies online has conservative ties: Parts of Speech First’s site are stored on another page, engagedev.com, that appears to be either a design or web-hosting firm that works with conservative causes including the National Republican Senate Committee and National School Choice Week.

Speech First claims to have more than 1,000 members, and Neily estimates student membership at “30 to 40 percent” of the total. But it’s not registered as a student group on Michigan’s student-affairs website. There’s no sign of regular meetings, online forums, or other community activity. Its members are anonymous, and e-mails from The Nation to Michigan’s conservative student groups weren’t answered.

As a nonprofit awaiting 501(c)(3) certification from the IRS, Speech First doesn’t have to disclose donors’ identities. Neily says it shouldn’t matter. “If somebody doesn’t like what we do based on possible allusions or connections to other groups, I think that’s sad,” she says. “If someone is going to say we’re hateful based on our connections, that’s really sad.”

“If the Soros [Open Society] Foundations wanted to be in,” Neily adds, “I would never turn that money away.” Neily would “love for liberal students to reach out,” says she did not vote for Donald Trump, and “despises” Jeff Sessions.

Neily also said she’d welcome ideological diversity on Speech First’s board, but acknowledged that only conservative candidates had been considered.

Neily may well be sincere. But that doesn’t change the fact that conservative billionaires have for decades used glittering generalities like ”liberty,” “freedom,” and “prosperity” to sell unfree causes: defunding transit, health care, and environmental protections; restricting reproductive rights; and rolling back Wall Street regulations and money-in-politics rules. These conservative ideas often come cloaked in libertarian language. In a 2016 speech leaked to The Nation, IWF’s chairman put it nicely: “being branded as neutral, but having the people who know, know that you’re actually conservative, puts us in a unique position.”

Speech First also has an accomplished board of directors that hints at the group’s political leanings. The board’s center of gravity is George Mason University, a DC-area school recently revealed to have given the Kochs some sway over academic appointments in departments they funded (which doesn’t sound very much like academic freedom).

Speech First Director Kim Dennis chairs and co-founded DonorsTrust, is secretary of Donors Capital Fund, and was secretary of George Mason’s Board of Visitors. Director Jamil Jaffer, a former attorney for the Department of Justice under George W. Bush, runs the national-security law program at George Mason’s Antonin Scalia Law School. Adam White, another director, directs George Mason’s Gray Center for the Study of the Administrative State. Rounding out the board is Kate Comerford Todd, another Bush administration attorney and ex-chief counsel of the litigation branch of the US Chamber of Commerce.

The academic credentials of Speech First’s board are no accident. Neither is the choice to target the University of Michigan, one of the country’s best and richest public colleges. The Kochs consider colleges their “talent pipeline”—and top schools, where students disproportionately come from money, are full of potential recruits. In a 2014 speech leaked to the Center for Public Integrity, a top Koch lieutenant said the Kochs relied on campus conservatives for “‘the major staffing for the state chapters’ of the ‘grassroots’ groups.’” That makes their involvement in campus political battles—limiting policies, attitudes, and expressions that discomfit boat-shoed College Republicans—a priority.

At Michigan, that means funding a lawsuit protecting young right-wingers from accusations of bias or harassment. In other contexts—like the Kochs’ heavy-handed influence at George Mason—it means challenging and even suppressing ideas that threaten the political right.

Michigan, on its part, says the group’s complaint is an inaccurate representation, though it’s since changed its speech code to clarify how it defines terms like “bullying” and “harassing.” Still, Speech First isn’t dropping the matter; in fact, it plans to “flood” the courts with similar lawsuits, starting with at least three more at other colleges this year.

The endorsement Speech First received from the Department of Justice supported “defending Americans’ first freedom at public universities.” It’s endorsed similar suits at other colleges, too, including UC Berkeley and Pierce College in Los Angeles (Speech First was not involved in these).

With its high-powered board and apparently limitless money, Speech First could win this case, and others, too. But the campus culture wars won’t be won in the courts: You can’t litigate students into changing their minds.