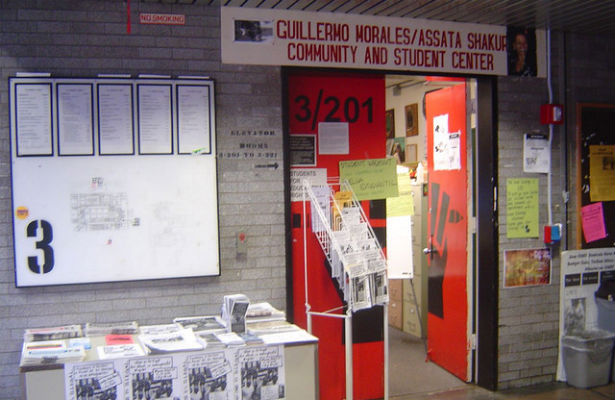 This article was originally published by the {Young}ist and is reposted here with permission.

On Sunday, October 20, at 11:00 am, NYPD officers and CUNY security marched into the main academic center at CUNY City College unannounced, put the campus on lockdown and seized files, documents, and personal property. The surprise action by the administration sparked an outcry from students, who gathered nearby to rally with the students who police officers had forced out of the building. In the process, police arrested student activist and US Army Veteran David Suker.

The administration had given no prior warning for the abrupt shutdown. Earlier that day, the CCNY Library Staff emailed all students with the new building hours for the upcoming week. The main academic center which houses a study center, a library, and computer labs, was closed to students, leaving them without a place to study during midterms. Four hours later, police officers forcibly removed students without warning or explanation.

This may be because the building also houses the Guillermo Morales-Assata Shakur Community Center, a radical student-run center that has been targeted by the administration in the past. Signs and posted materials for the Center were taken down and replaced with a sign reading “Careers and Professional Development Institute”. The entrance has also since been repainted. Many students speculate that the community center is the real reason behind the building being shut down.

This was not the first time that the MSCC has been attacked by CCNY administrators—in 2006, officials ordered that the center’s name be stripped, former Chancellor Matthew Goldstein deemed the namesake space “unauthorized and inappropriate” because it was honoring members of the Black Liberation Army and Puerto Rican independence group known as the FALN, both who are currently living in exile in Cuba on the lam from the law in the US.

“They went in and cleared everything out. They said that they’re going to ‘examine’ everything then put it in storage,” said Alyssia Osorio, Director of the Morales-Shakur Center. “Twenty years’ worth of documents pertaining to student and community resistance.”

Osorio is not the only CUNY student organizer who believes that the CCNY administration’s reasoning for closing the MSCC is “deceptive and dishonest”. Even student government leaders—who have been notably critical of more radical student organizing—have come out in support of MSCC and what it stands for as a vital part of CUNY student movement history.

Although the students were aware that the Professional Development Institute was undergoing talks to expand to a new location, even members of student government who were participating in the discussions about possible spaces were surprised. “It was shocking, because we were on a committee to decide on this issue,” said Mel Niere, President of the City College Student Government. “When we last met in Spring 2013, there was never any indication from City College or administration that the PDI was going to displace the Shakur Center.”

The Morales-Shakur Community Center (MSCC) is a popular student and local hub that hosts community events and student group meetings as well as study hours. Named after notable activists Guillermo Morales and Assata Shakur, who were City College alumni active in the Civil Rights Movement in the 1970s, the space has maintained autonomous student control since 1989, when it was won over by students after massive protests that started at City College reverberated throughout the CUNY in response to tuition hikes, resulting in student occupations at 13 of the 20 colleges in the university system.

Carolina Martinez, a junior studying Political Science and International Studies, said, “as a member of USG, I can tell you we did everything in our power to maintain constant communication with administration on what the plan was for the Career and Professional Development Center, however the MSCC was never mentioned at any point in time. It was a shock to us that this was their plan.”

The CUNY City College Facebook Page published a note stating: “The City College Careers and Professional Development Institute has been expanded to provide additional services to students seeking assistance in transitioning from college to the workplace”, but made no reference to the unwanted displacement of an existing community center. Students posted outraged comments to City College’s Facebook and Twitter.

It’s been over twenty years since the last massive student strike at the largest university system in the United States, and City University of New York students have been criticized by the media as being docile and unwilling to fight to resist budget cuts and tuition hikes. But in the past few years, the CUNY student movement has been building a base and augmenting its strength and militancy, from heated confrontations at the Board of Trustees meetings in 2011, to students “bird-dogging” General David Petreaus outside of his class at CUNY’s Macaulay Honors College throughout this semester.

Student activists and groups from around the city were quick to respond, expressing their outrage and solidarity with students at City College. A call to rally the day after the closing drew a large crowd of students from all across the CUNY system. Students for Educational Rights issued a press release calling on to allies to “hold CUNY accountable for its stifling of student voices and disempowerment of community organizing.” Student Governments of City College and Brooklyn College also made statements of solidarity.

While the exact reasoning of the removal of the center from the hands of students and community remains unclear, CCNY communication team has been tweeting their planned changes for the student space.

CUNY Chancellor William Kelly and CCNY President Lisa S. Coico have yet to release statements explaining their position on the removal of students from the MSCC. As of Monday evening, they could not be reached at their offices.

Niere, president of CCSG, cites the building closing as a CUNY-wide issue—one that is a threat to students at other CUNY campuses. She would be actively reaching out to other campuses’ student governments and organizations.

Students plan to continue fighting to keep the center open and thriving as it always have been, calling on sister campuses across CUNY for support and solidarity to unite in a common fight for all students.

Osorio, director of the MSCC, was firm in her outlook of the future: “We’re not going to stop fighting. We’re going to get our center back. No if’s, and’s or but’s.”