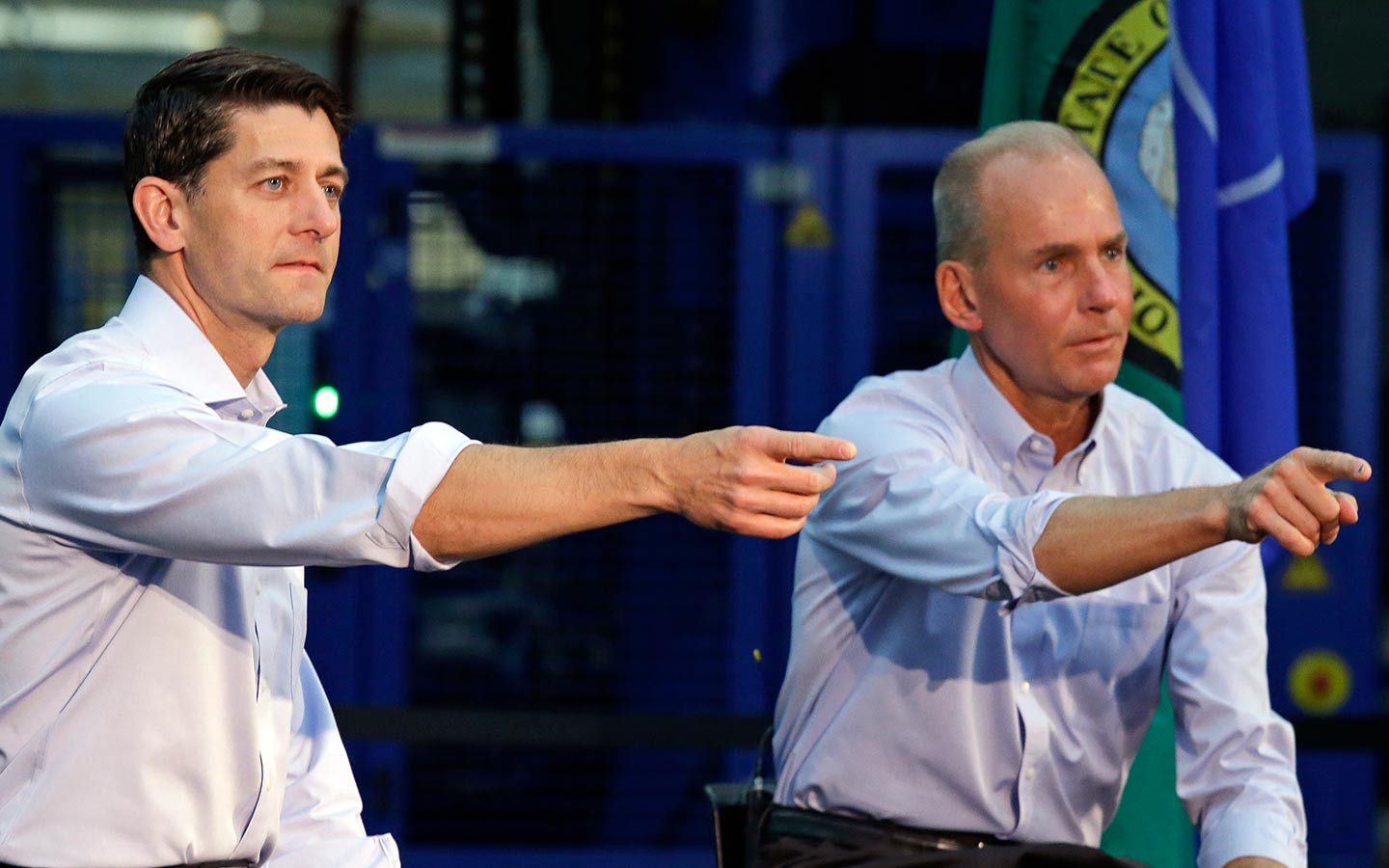 President Trump, after a summer of neglecting his top legislative priority, will make a full-throated pitch for tax reform today in Missouri. The still-fuzzy plan will have a lot of moving parts: lower top marginal rates, simplification of deductions, and elimination of the estate tax, which “only morons pay,” according to Trump’s economic adviser, Gary Cohn. But one centerpiece will be a significant reduction in the corporate tax rate, from the current 35 percent rate to as low as 20 percent.

This is necessary for three reasons, according to Republicans: “Jobs, jobs, jobs,” to quote House Speaker Paul Ryan this June. Though congressional Republicans and the White House rarely see eye-to-eye these days, they are united on the idea that cutting corporate taxes will spur an hiring boom that will reach down to the ordinary worker.

A new report from the Institute for Policy Studies shows this isn’t true. US companies are already paying minimal amounts in corporate taxes, and the ones most likely under Republican theory to pour tax savings into job creation have instead been more likely to cut their workforce over the past nine years. The data shows that low corporate tax rates more often lead to increases in CEO pay and boosts for shareholders. 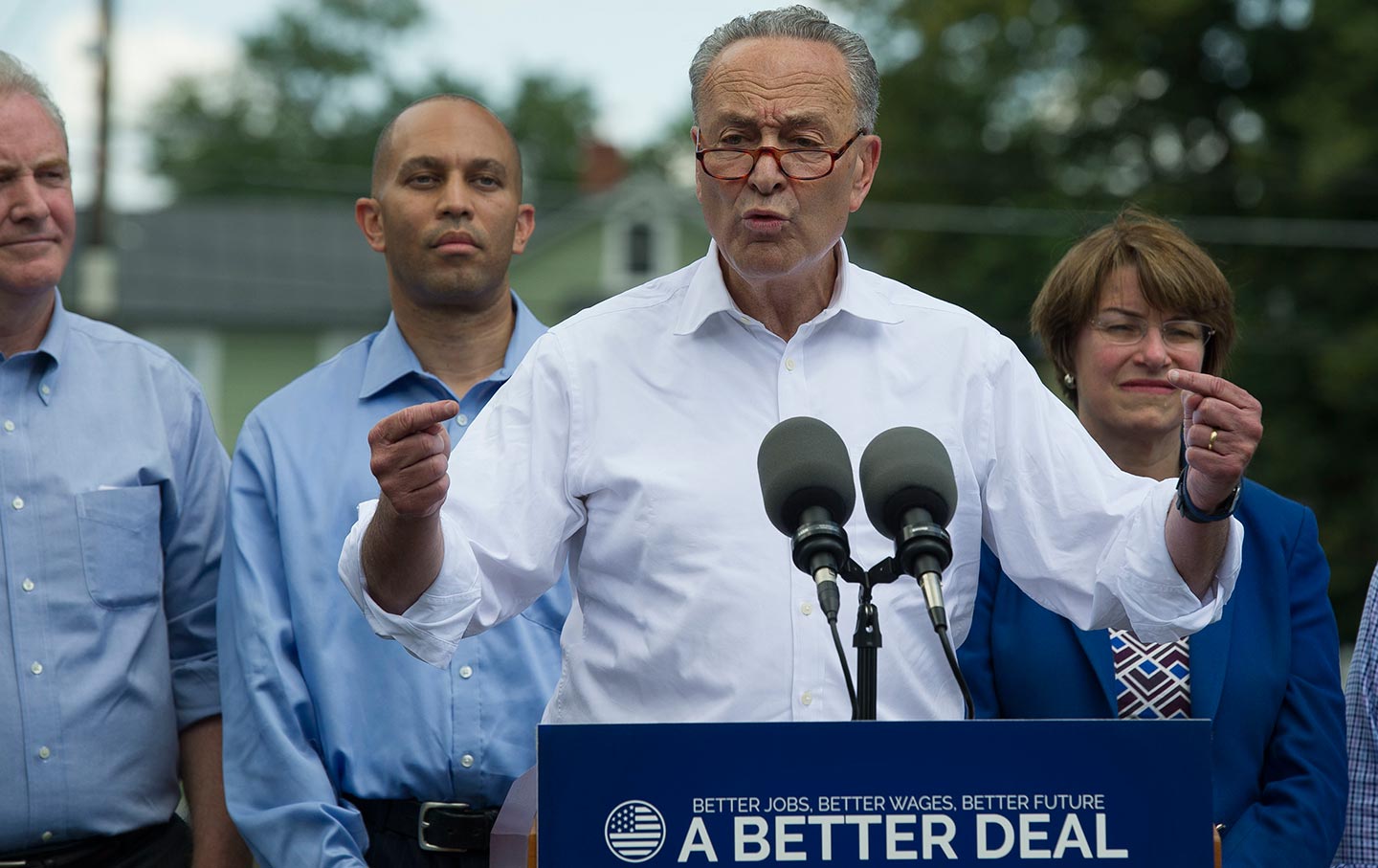 Democrats Need to Find Their Voice on Tax Reform

Before breaking down the report, it’s important to recognize that the 35 percent US corporate tax rate doesn’t reflect what corporations actually pay. The average effective corporate tax rate in the United States, once deductions are factored in, is around 27 percent, putting it below the global average. If you limit the review to profitable corporations, the number drops to 19.4 percent. Corporate taxes as a share of GDP have fallen threefold since 1952, from 6 percent to 2 percent. Far from being overtaxed, corporations have carried an increasingly lighter burden.

Corporations avoid the full rate because of loopholes. There are deductions for domestic manufacturing and “bonus depreciation,” which allows immediate write-offs for half the cost of long-term investments. And corporations benefit tremendously from stashing profits overseas, thereby avoiding taxation entirely. These trillions of dollars in “offshore” profits aren’t sitting in a locker in Zurich; they’re invested in instruments like US Treasury bonds. In other words, the government pays corporations for their own tax avoidance.

The IPS report identifies 92 corporations that reported a profit every year from 2008 to 2015, and that also paid less than 20 percent in corporate income tax. These corporate winners include the usual suspects—banks, defense contractors, telecom firms, and energy companies. Because they were profitable, and paid taxes at or below the Republicans’ optimal rate, they offer an excellent test case. “If claims about the job creation benefits of lower tax rates had any validity,” report author Sarah Anderson writes, “the 92 consistently profitable tax-dodging firms we identified would be among the nation’s strongest job creators.”

But the lower rates didn’t correspond to job creation. Collectively, the 92 profitable corporations cut jobs by 0.74 percent over the period studied, from 2008–16. During that same time, the private sector added jobs at a 6 percent clip. So low-tax corporations did far worse on hiring than their counterparts.

More than half of the firms in the study, 48 in all, cut jobs, affecting 483,000 workers. AT&T shed 79,450 positions, the most in the study, and Verizon cut 78,450, despite having 8.1 percent and 9.1 percent corporate tax rates, respectively. 21st Century Fox, with a low 15.6 percent tax burden, eliminated almost half of its workforce over the 2008–16 period. Incredibly, the main tax credit it took was for “domestic production activities,” which was intended to keep jobs in the United States.

General Electric represents perhaps the most devastating example in the study. Its corporate tax rate over the sample was -3.4 percent—thanks to multiple deductions, the government was paying GE money to exist—but it still cut 14,700 jobs.

Where did the money go? Into the CEOs’ pockets, for starters. Fox’s Rupert Murdoch’s compensation increased by 74 percent at the same time that he was drastically cutting jobs. CEO compensation at AT&T rose 146 percent. Rex Tillerson, the current secretary of state, enjoyed $27 million as CEO of ExxonMobil in 2016 and a $180 million stock payout for entering government service. By contrast, ExxonMobil, which paid a 13.6 percent US tax rate, got rid of over one-third of its total jobs worldwide. (The company only releases global jobs figures.) Overall, the 92 low-tax firms surveyed raised CEO pay at a faster clip than the US average.

The 10 biggest job cutters in the study also spent an average of $45.5 billion in stock buybacks, more than six times the amount of companies in the S&P 500 over this time frame. With buybacks, corporations use profits to repurchase stock, artificially increasing demand and inflating the market price. This benefits not only shareholders with a short-term price boost but also top executives, who typically have large amounts of their compensation tied up in corporate stock. But the trade-off between buybacks and jobs is pretty clear: Profits used to goose the stock price aren’t put to work to invest in facilities or research, or to raise wages or hiring levels.

IPS’ findings are consistent with academic research on corporate taxes and jobs. The Federal Reserve Board of Governors saw “little evidence that corporate tax cuts boost economic activity, unless implemented during recessions.” The Economic Policy Institute could summon no data showing corporate tax cuts moving the needle; instead, they said, it would “primarily benefit a small number of high-income capital owners.”

The one time in recent history that we gave corporations a big tax cut, the results were disastrous. In 2004, George W. Bush allowed companies with stashed offshore profits to “repatriate” them at 5.75 percent—nearly 1/6th of the normal tax rate—with the belief that the companies would subsequently use the money on business investment. In reality, a study from the National Bureau of Economic Research showed that “a $1 increase in repatriations was associated with an increase of almost $1 in payouts to shareholders.” Other independent analyses showed the same thing. Bush reportedly felt betrayed by corporate executives, who promised him they would create jobs with the cash.

Those same CEOs are positively giddy about getting more free money to play with. AT&T CEO Randall Stephenson and Boeing’s Dennis Muilenburg hosted town-hall meetings for House Republican leaders in the last week, touting their plan for corporate tax cuts. AT&T and Boeing are both on the IPS list of corporate tax dodgers who used the savings on executive pay and buybacks while cutting jobs.

When Paul Ryan visited Boeing and again insisted that lowering corporate taxes would bring more jobs and better wages to America, Muilenberg backed him up, saying, “You got it!” Republicans and their corporate friends are simply trying to play the country for suckers again, when the facts are clear.