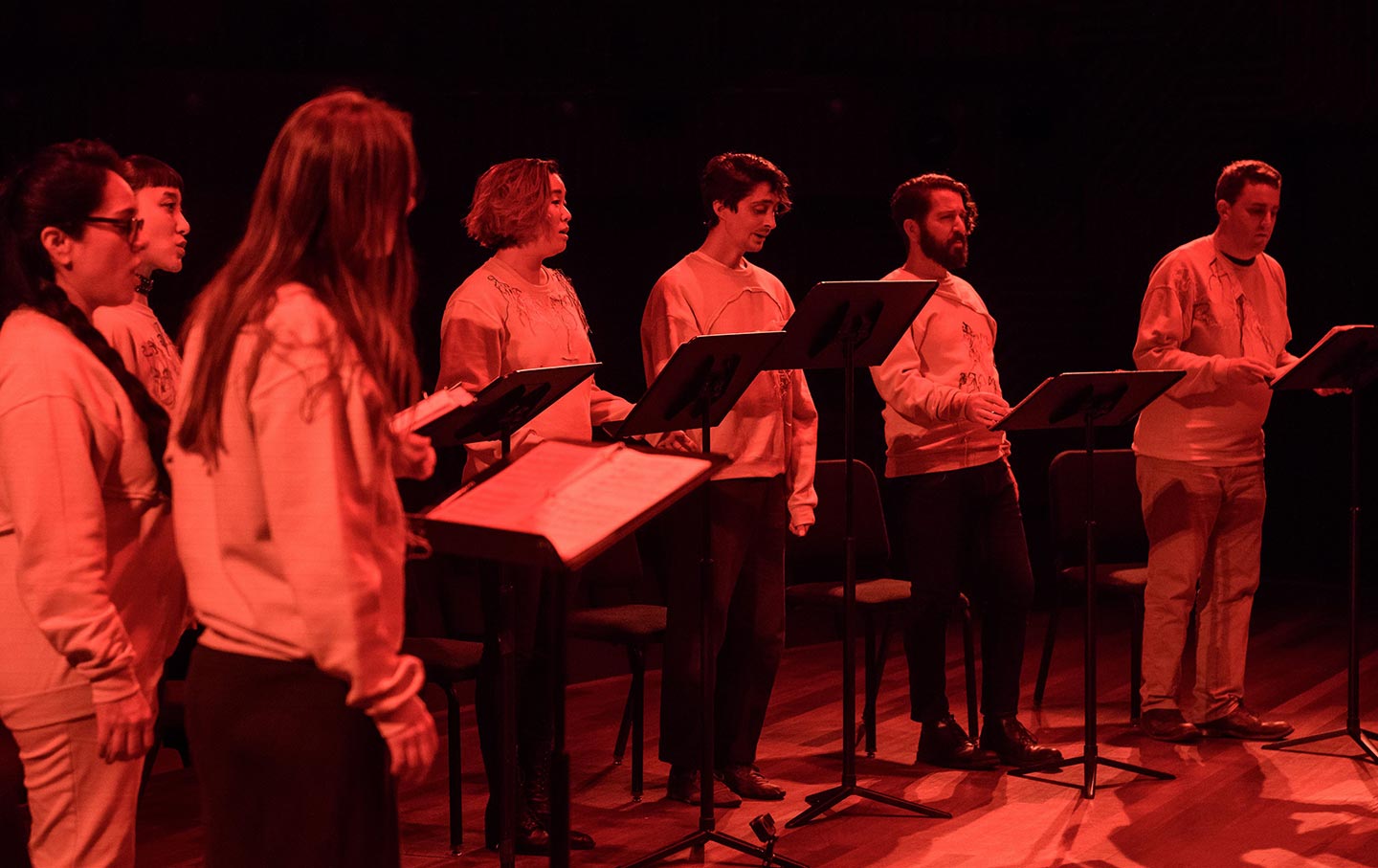 In 2014, Brooklyn-based cellist Ethan Philbrick began work on the project that would become Choral Marx, which sets The Communist Manifesto to music. Philbrick, a performance studies PhD whose academic writing has appeared in a variety of journals on gender and sexuality, began with a simple desire to read Marx’s pre-Capital works out loud in a reading group; this inspired him to find the music hidden between Marx’s and Engels’ lines.

He began recruiting his chorus from the ranks of academics, organizers, and artists whose readings veered between harmonium and cacophony, stretching, testing, and tasting the text. Before long, Philbrick was adapting these refrains to music, with the piece coming together formally in the ill-starred fall of 2016, when the utopian dream of a just society withered practically overnight.

“I was interested in the moments Marx and Engels get figuratively evocative,” Philbrick says, “so I wanted my setting of Choral Marx to be a complicatedly multiple work that asks how Marx might reverberate now, at this political moment when we’re asking some very basic questions about world capitalism and how it is propelled by racism and nationalism.”

Philbrick’s leftism consists of a willingness to listen; the work, obviously political by nature, elevates itself into a paean or a plea—even a threnody.

Choral Marx, which was recently performed at NYU’s Skirball Center, consists of nine singers whose variously musical utterance transfigures, toys with, and otherwise implements eight heavily excerpted selections from the 1888 Samuel Moore translation of the Manifesto. Led by Philbrick’s cello, the band played all the hits: “The history of all hitherto existing societies/ Is the history of class struggle,” “The bourgeoisie has reduced personal worth to exchange value,” “There is a specter haunting this world” and so on.

In addition to the fancy central chorus, each of whom wore a sweatshirt embroidered from the inside out with Marxist quotations, a volunteer chorus planted among the audience would occasionally add their echo, adding to the dreamy atmosphere and managing to startle the hell out of me almost every time it came their turn to intone.

The atmosphere was an engaged fascination throughout, with the volunteer chorus adding to the feeling that the performance was a kind of séance. Still, it would be a mistake to think of it as a mere mystification of the foundational communist principles; rather, it is a game of recombinations that finds new meaning in repetition, restraint, and simply rejiggering the text until it becomes unfamiliar. It is then an experiment in language as much as a socialist venture.

The performers themselves are drawn from a hodgepodge of vocations and political commitments. There’s Zapatista solidarity activist Gizelxanath Rodriguez; avant-gardist Amirtha Kidambi, known for her collaborations with Ropbert Ashley; and opera singer Tomás Cruz. The diversity of the singers creates a tension between vocalization and mobilization that dramatizes the Manifesto, even as it investigates the possibilities of political theory as music. Bathed in red light and ending with the chorus collapsing into a comfy-looking dogpile, the artifice comes to feel instinctive, less an experiment and more a methodology for rediscovering the pleasure of the text’s language.

At times overwhelmingly beautiful, the performance is nevertheless extremely strange—this is, after all, a room where Karl Marx’s sentiment that “all that is solid melts into air” becomes a refrain both hypnotic and monotonous. The recital itself resembles the choral works of Steve Reich, while the incorporation of the volunteer chorus allows Philbrick to, in his words, “stage the ambivalence between training and disciplined labor, volunteer and paid, wage and performance,” which is the metatextual sweet spot where the conditions of the performance become the performance.

There’s also the obvious fact, which Philbrick was quick to acknowledge, that we’re talking about NYU, one of the biggest developers in the city. This either ironizes the Marxist underpinnings of the piece, bites the hand that feeds it, or both, depending on your mileage. “Staging antagonisms,” is how Philbrick puts it, the effect of singing history in the midst of institutional power. “The piece for me isn’t trying to solve these contradictions, but I hope it energizes and disrupts the power structures that inform it.”

In fact, Philbrick seems comfortable dwelling in contradiction as well as spontaneity; the piece involves two randomly selected volunteers from the audience that Philbrick asks to come on stage and read aloud, flanked by the chorus. There’s something undeniably hopeful about Philbrick’s staging, alive to the potential of the Manifesto as a work of imaginative art.

Choral Marx has its origins not in dogma but in playfulness. Philbrick seized on the famous final line of Theses on Feuerbach: “Philosophers have hitherto only interpreted the world in various ways; the point is to change it,” writing music for it as a refrain, the experiment that would eventually beget the more sustained experimentation of Choral Marx.

Post-performance, Philbrick hopes to return to the field of activism-as-art, adding that he hopes the audience leaves asking the questions that the Manifesto continues to ask, 170 years following its composition.

It’s also, Philbrick acknowledges, a mnemonic device for committing sections of it to memory, which he calls “the promiscuousness of sound and music [that] works to infect our emotions.” As to what it actually means to commit Marx to song in the Trump era, the piece ultimately mimics its own questing and inquisitive spirit—it’s not an answer, it’s the asking of the question, in as many registers as possible.

“We’re not singing the communist society to come,” Philbrick explains. “We’re singing our way through the contradictions of capital.”