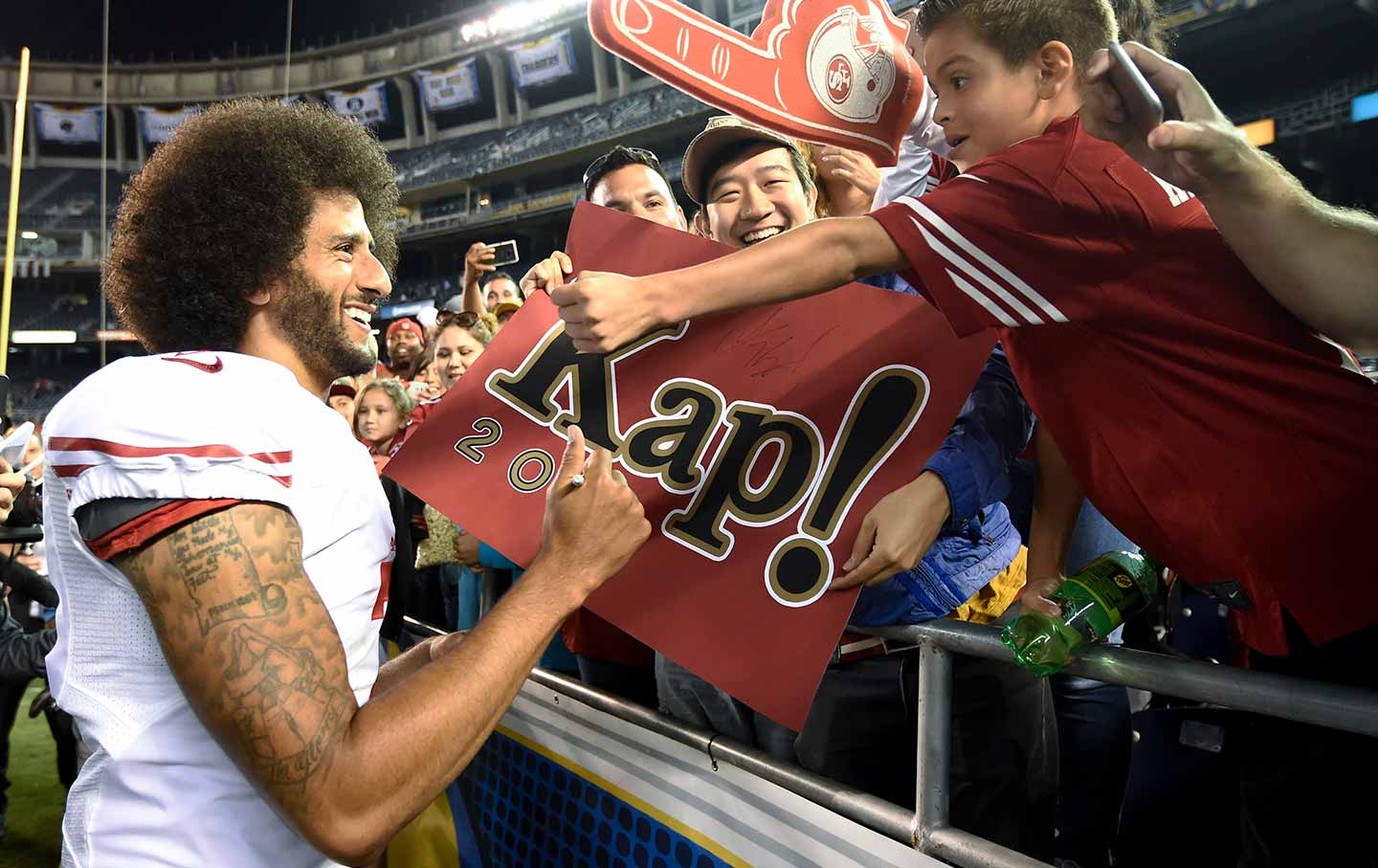 The most common response to Colin Kaepernick’s anthem protest against police violence in the corridors of the sports world has been, “I support his goal, but not his methods.” This has been “the line” from NFL Commissioner Roger Goodell to Hall of Fame receiver Jerry Rice to quarterbacks Drew Brees and Russell Wilson. It’s a perspective that has extended to the liberal commentariat, encapsulated in cringeworthy fashion by Atlantic columnist Peter Beinart, who wrote a piece on September 1 titled “How Colin Kaepernick’s Protest Misfired.”

Yes, mere days after Kaepernick went public with his stand and amid a whirlwind of coverage, Beinart was there to preemptively judge it a failure because openly protesting the flag “opens him up to charges of disrespect.”

Beinart bends over backward to say that, while he believes police violence and “racism” to be bad things, “tactically there is a better way.” He writes, “But it’s one thing to defend Kaepernick’s right to protest and to applaud his outrage over state-sanctioned racism. It’s another to believe that his particular form of protest is wise.”

One wonders if we’ll see a mea culpa from Beinart and many others, because, as the NFL season begins, Kaepernick is looking like a tactical maestro. Not only did his team, the San Francisco 49ers, keep him on the roster when many predicted he would be cut, but the team pledged $1 million to organizations dedicated to “the cause of improving racial and economic inequality and fostering communication and collaboration between law enforcement and the communities they serve here in the Bay Area.”

What Goodell, Jerry Rice, and Beinart have in common is that they are 2016 textbook examples of Martin Luther King Jr.’s searing description of “the white moderate” in “Letter From a Birmingham Jail,” when he wrote, “I have almost reached the regrettable conclusion that the Negro’s great stumbling block in his stride toward freedom is not the White Citizen’s Counciler or the Ku Klux Klanner, but the white moderate, who is more devoted to ‘order’ than to justice; who prefers a negative peace which is the absence of tension to a positive peace which is the presence of justice; who constantly says: ‘I agree with you in the goal you seek, but I cannot agree with your methods of direct action’; who paternalistically believes he can set the timetable for another man’s freedom; who lives by a mythical concept of time and who constantly advises the Negro to wait for a ‘more convenient season.’”

I’m not against the military. I’m not against the police or America. I’m just against social injustice.… I’m proud of it. I don’t regret it. I know this is right…. I feel like this is the right platform. I feel like this is our only platform to be heard. A lot of time people want us to just shut up and entertain them. Shut up and play football. But we have voices as well. We’re actually educated individuals that went to college. When we have an opinion and speak it, a lot of people bash us.

Marshall then also pledged money to a variety of charities.

The linebacker has now joined volleyball players, soccer players, scores of veterans in the stands, and fellow football players who are hearing the anthem, thinking about police violence, and taking a knee.

Then there are the Seattle Seahawks. The entire team is apparently planning some form of team-wide protest on Sunday, one, in the words of receiver Doug Baldwin, “To express a desire to bring people together, our team will honor the country and flag in a pregame demonstration of unity.” This could be powerful, or it could muddy Kaepernick’s foundational message that we have “bodies in the street and [police] getting away with murder.”

Yet, while we should be wary as more and more players and teams rush to say “me too,” it is a sign that Kaepernick is winning. Maybe the others will, consciously or unconsciously, blur the central motivation of Kaepernick’s protest—“police are getting away with murder”—but that always happens when people realize that you are walking with the wind. It is best to celebrate that people are rushing to Kaepernick’s side while also fighting to amplify the actual message, which is not to “honor the country” but to challenge the country to resist police violence and extrajudicial killings.

Some will continue to bash these “methods.” Others will co-opt and commodify. But Kaepernick is giving us a textbook example of what Howard Zinn said, which is especially apt this presidential season: “What matters most is not who is sitting in the White House, but ‘who is sitting in.’ In this case, it’s kneeling, not sitting, and it has been strikingly effective.