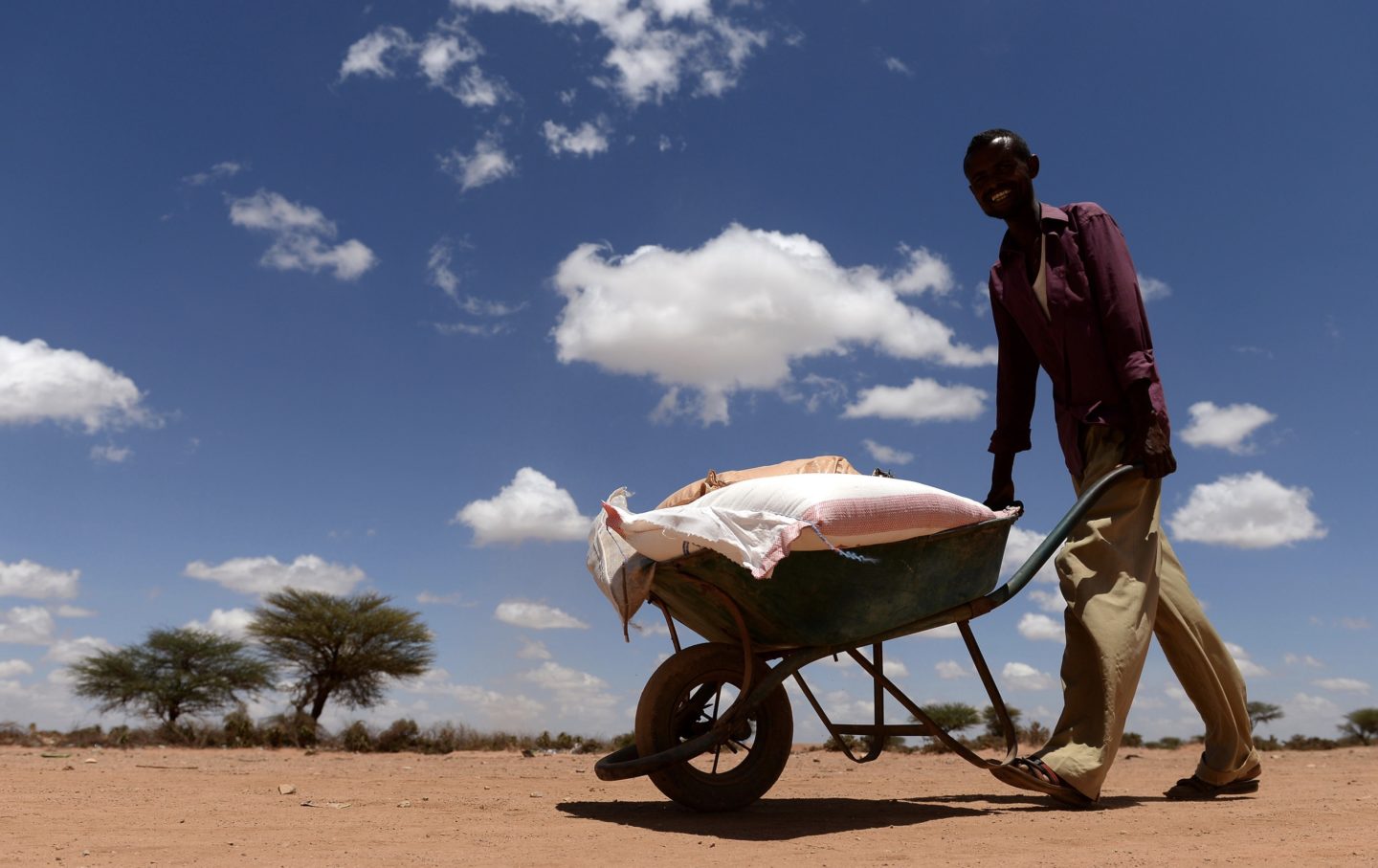 As famine and drought spread through Somaliland, a villager carries bags of rice, sugar, dates and palm oil back to his house after collecting food from a charity, May 2017. (Joe Giddens / PA Wire)

There’s a blur where the horizon once was, a question mark nagging at every sentence you might think to form. The daffodils are pretty, but aren’t they a little early this year? Is it okay to enjoy the warmth of the sun on your bare arms in February? Some of us get to experience climate change as something like a mood, an unwelcome sixth sense that allows us to imagine everything we know and love in ruins. It becomes concrete only in sudden, headline-grabbing bursts: a typhoon here, a wildfire there, another species somewhere lost. It’s real enough, we know, but mainly we experience it as a shadow cast by something that hasn’t happened yet. To some of us, at least.

It is not everywhere so abstract. In 2017, I visited the independent but unrecognized nation of Somaliland, the northern third of what usually gets called Somalia. Crisscrossing the roadless savannah, I quickly learned that cadavers meant a village was near. Usually they started a few miles out: mainly sheep and goats, but also camels and donkeys drying to leather on the bare, red earth. The previous year, the autumn rains had failed to arrive. The spring rains didn’t come either. Everywhere people told me drought had taken as much as 90 percent of their herds—the primary form of capital in an overwhelmingly pastoral economy. And everywhere I saw people on the move: in desperate search of pasture, or, having already lost everything, of some other source of sustenance. New communities were forming on the edges of the cities, ragged camps of the displaced, once-proud herders reduced to gathering gravel for pennies a day with no prospects ahead but further loss.

That was nearly two years ago. Last year, the spring rains came hard, but the herds were gone, the damage done. Most of the country’s wealth had been reduced already to bones. The fall’s rains were weak again, and hunger is once more on the march. In the Horn of Africa, invisibly to most Western eyes, the catastrophe of climate change has already altered everything.

Last week, the international NGO CARE published its third annual report on the world’s 10 most-under-reported humanitarian crises. Being a battleground in the US war on terror still gets you in the news sometimes, which is likely why Somalia did not rate a mention, but its neighbor, Ethiopia, received the unwelcome honor of making the list twice. It held second place for hunger in its east, where the same drought that hit Somalia two years ago has left more than 3 million people in need of humanitarian aid, and seventh place for massive displacement in the south, where violence broke out between pastoral and agricultural communities last spring. (Throughout the continent, drought is spurring deadly conflicts between herders and farmers over land rights.) By the end of the summer, nearly a million people had fled their homes.

This year, CARE highlighted the fact that almost all of these crises can be traced in large part to climate change. In Sudan, unpredictable rainfall has meant “frequent droughts,” occasional flooding, and “extreme hunger.” In the island nation of Madagascar, “at the frontline of climate change,” cyclones and drought have put 1.3 million people at risk of hunger and, according to UNICEF, a staggering 49 percent of the country’s children have been left stunted by malnutrition. In the Philippines, 2018’s fiercest storm, “super-typhoon” Mangkhut, fed by the heat of the warming oceans, displaced more than a million people. In Niger, desertification has spurred violence and displacement, just as it has in Chad, where nearly half the population is now chronically malnourished. The major source of fresh water in the region, Lake Chad, has shrunk to one-twentieth the area it once covered. In Haiti it was drought again, plus three devastating hurricanes over two consecutive years, leaving nearly 3 million people in need of immediate aid.

The numbers, all those millions upon millions, are abstract. The realities are not. Imagine a child you cannot comfort, a parent you cannot save, a lover lost in the confusion, a home you’ll never see again. Imagine all possibilities foreclosed, and then begin multiplying those imaginings by thousands, and thousands of thousands, and on.

Of course, climate change is far from the only cause of all this suffering. Infrastructure was already poor or absent, inequality and instability already profound. All of these crises took shape in a global economic system in which wealth and resources flow in one direction—from poor countries to rich ones—and misery flows in the other. But the droughts and the storms have triggered what Christian Parenti has called a “catastrophic convergence” in which disasters do not merely happen simultaneously, but “compound and amplify each other.”

Thus, the long history of colonial-era expropriation, exploitation, and theft echoes loudly in this new dispensation, in which the sectors of humanity that profited the least from industrialization suffer the most from its environmental impacts. The conditions that drive climate change have been created in one part of the world. The consequences have so far overwhelmingly been suffered in another. The longstanding invisibility of the majority of the planet’s poor to its privileged few has been compounded and amplified as well. Myopia and blindness meet rising temperatures and rising seas to form yet another catastrophic convergence.

CARE, in a press release, took the media to task for turning “a blind eye” to these deepening calamities, and to climate change’s role in creating them. After decades of maddening neglect, it is only in the last year or so that the major print outlets have begun to catch up with the urgency of the crisis. (The networks lag far behind.) But the coverage still focuses overwhelmingly on the science of climate change, and on episodic disasters affecting Europe and North America. It is, as always, as if the majority of humankind, dark-skinned and poor, did not exist. Despite the occasional in-depth piece on the effects of rising seas on the bayou, or of melting permafrost in Alaska and the rare photo essay on Bangladesh or Kiribati, you still have to pay very close attention to learn that climate change-related drought has been a major cause of migration from Central America to the United States and from sub-Saharan Africa to Europe. In media as in government, no one is committing anything close to the resources that the crisis demands. If we are not talking about it, we cannot begin to understand the scope of what we’re up against.

We, living humans of the planet Earth, can no longer afford not to see one another, and not to listen to each other’s cries, shouts, demands. Our fates have always been linked. Now, they are more than ever. The failure of the planet’s wealthy to act is amputating not only the future but also the present-tense possibilities of many millions here among us.