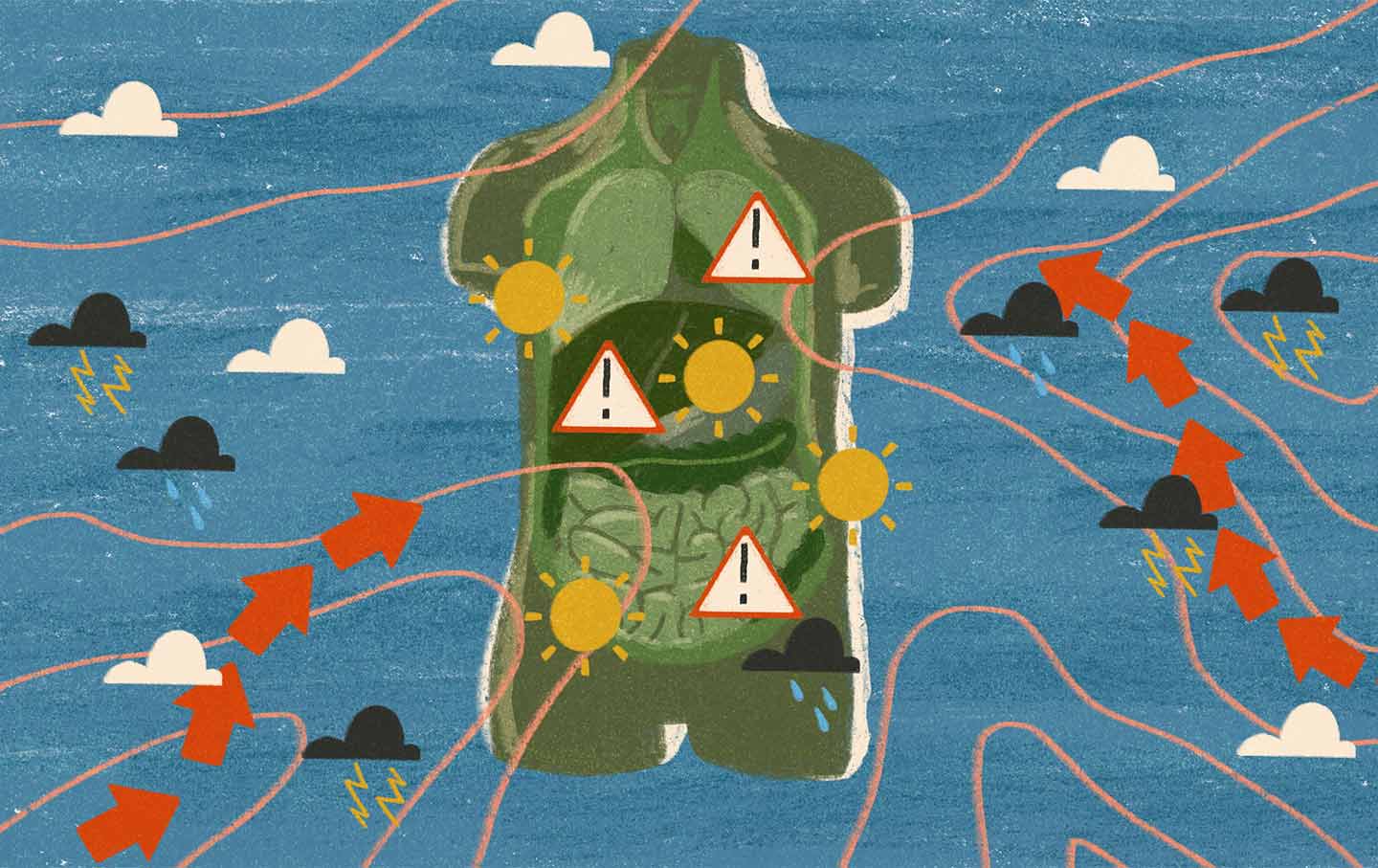 Climate illness. (Illustration by Sonny Ross for The Guardian)

This story originally appeared in The Guardian. It is republished here as part of The Nation's partnership with Covering Climate Now, a global collaboration of more than 250 news outlets to strengthen coverage of the climate story.

Children, pregnant people, and the elderly are the most at risk from extreme weather and rising heat. But the impact of the climate crisis—for patients, doctors, and researchers—is already being felt across every specialty of medicine, with worse feared to come.

“There’s research suggesting that our prescription medications may be causing harm because of changing heat patterns,” said Aaron Bernstein, a pediatric hospitalist who is the codirector of the Center for Climate, Health, and the Global Environment at Harvard University.

“There’s evidence that extreme weather events are affecting critical medical supplies so we can’t do things as we normally would do because IV fluids aren’t available.

“And there’s evidence that extreme weather events are knocking out power more and more, and that is a huge issue for providing care in health care facilities.”

In a recent example, a study in The Journal of the American Medical Association found that lung cancer patients undergoing radiation were less likely to survive when hurricane disasters disrupted their treatments.

An August article in The New England Journal of Medicine lays out dozens of similar studies to show how the climate crisis affects each practice of medicine. Renee Salas, a co-author of the report who teaches emergency medicine at Harvard Medical School, said, “The climate crisis is impacting not only health for our patients but the way we deliver care and our ability to do our jobs. And that’s happening today.” 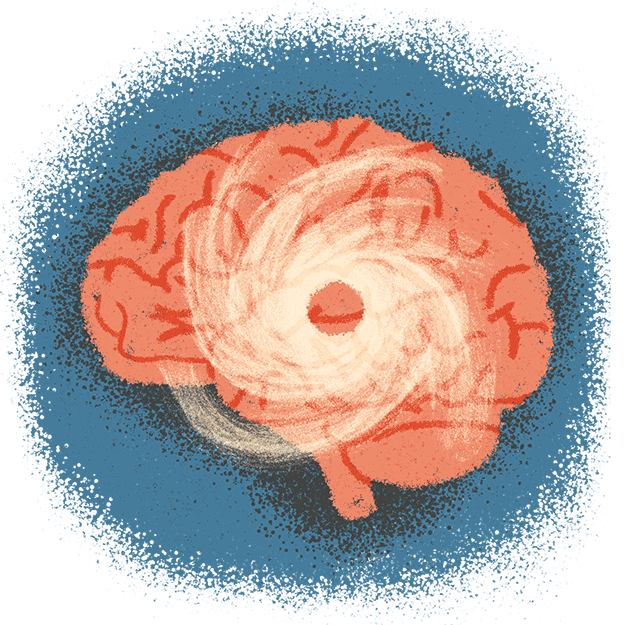 As temperatures increase, plants produce more pollen for longer periods of time, intensifying the allergy seasons. Increased concentrations of carbon dioxide in the atmosphere can make plants grow more and cause more grass pollen, which causes allergies in about 20 percent of people. Carbon dioxide can also increase the allergy-causing effects of pollen.

Neelu Tummala, an ear, nose, and throat specialist at the George Washington Medical Faculty Associates in Washington, DC, said she sees many patients with allergic rhinitis, or inflammation of the nasal cavity, congestion, and post-nasal drip.

“It used to be that tree pollens were only in spring, grasses were just in summer, ragweed was just in fall,” Tummala said. “But the timing of those is starting to overlap more.”

One of Tummala’s patients, Kelly Kenney, had minor seasonal allergies as a child but now suffers from year-round sinus pain, ear pressure, and congestion.

Pregnant people are more vulnerable to heat and the air pollution that is being made worse by climate change.

Bruce Bekkar, a San Diego–based obstetrician-gynecologist who stopped practicing six years ago to spend more time as a climate activist, has compiled 68 studies from the continental United States on the association between heat, smog, and the tiny particles of pollution that come from fossil fuels and how they are connected with premature birth, low birth weight, and stillbirth.

More smog forms when it is hot, and some research suggests that particulate matter also increases with the climate crisis, although the data is less robust.

Bekkar said he and his co-authors found a significant association in 58 of the 68 studies. The body of research covers 30m births in the United States.

Bekkar said doctors should talk to their patients about how heat waves could lead to premature births and how staying away from air pollution can help them keep their children healthy.

“We’re finding that we have increasing numbers of children born already in a weakened state from heat and air pollution. That’s a totally different story than thinking about climate change as the cause of hurricanes over Florida.… It’s a much more pervasive and ongoing impact.”

In the developing world, pregnant people can also suffer from food and water scarcity. Insect-borne illnesses—such as the Zika virus, which was spread by mosquitoes—are also a hazard to developing fetuses.

Air pollution gets worse as temperatures rise, stressing both the heart and lungs. The fossil fuel pollution that causes the climate crisis also is linked with increased hospitalizations and deaths from cardiovascular disease, and it is connected with more asthma attacks and other breathing problems.

More intense wildfires spew dangerous smoke into the air, as documented in the western United States this year. And hotter days make more smog, which the American Lung Association describes as acting “like a sunburn on your lungs which may trigger an asthma attack.”

Children under the age of 5 experience the majority of the health burden from climate change, according to Salas’s report.

Samantha Ahdoot, a pediatrician in Alexandria, Virginia, treated an 11-year-old and a 13-year-old who moved from Florida after a hurricane destroyed their community and their medical records at their doctor’s office.

One needed surgery for a heart condition and had to start from scratch with a new cardiologist. Both had attention-deficit/hyperactivity disorder (ADHD) that was harder to treat amid the major life disruption and without records on adjustments to medication dosages. Ahdoot, who also founded the group Virginia Clinicians for Climate Action, said she has seen an influx of families moving because of weather disasters.

Much hotter days make it harder to stay hydrated. They are linked with electrolyte imbalances, kidney stones, and kidney failure. Patients who need dialysis as their kidneys fail can have trouble getting treatment during extreme weather events.

Higher temperatures and the depletion of the ozone layer increase the risk of skin cancer. The same refrigerants and gases that damage the ozone layer contribute to climate change.

Heat is linked with higher risks for salmonella and campylobacter outbreaks. Extreme rains can contaminate drinking water. Harmful algae blooms that thrive in higher temperatures can cause gastrointestinal problems, too.

The American Psychological Association created a 69-page guide on how climate change can induce stress, depression, and anxiety. The group says “the connections with mental health are often not part” of the climate-health discussion.

People exposed to or displaced by extreme weather or violent conflict are at higher risk for mental health challenges. Extreme heat can also make some mental illnesses worse.

The University of Maryland’s Howard Center for Investigative Journalism found emergency calls relating to psychiatric conditions increased about 40 percent in Baltimore in summer 2018, when the heat index surged above 103 degrees Fahrenheit, as reported on NPR.

And some psychotropic medications interfere with the body’s ability to regulate temperature—increasing vulnerability to heat.

Fossil fuel pollution can increase the risk of stroke. Coal combustion also produces mercury—a neurotoxin for fetuses. Diseases spread by mosquitoes and ticks increase the chance of neurological problems. Extreme heat is also linked with cerebrovascular disease, a disorder that affects blood supply to the brain.