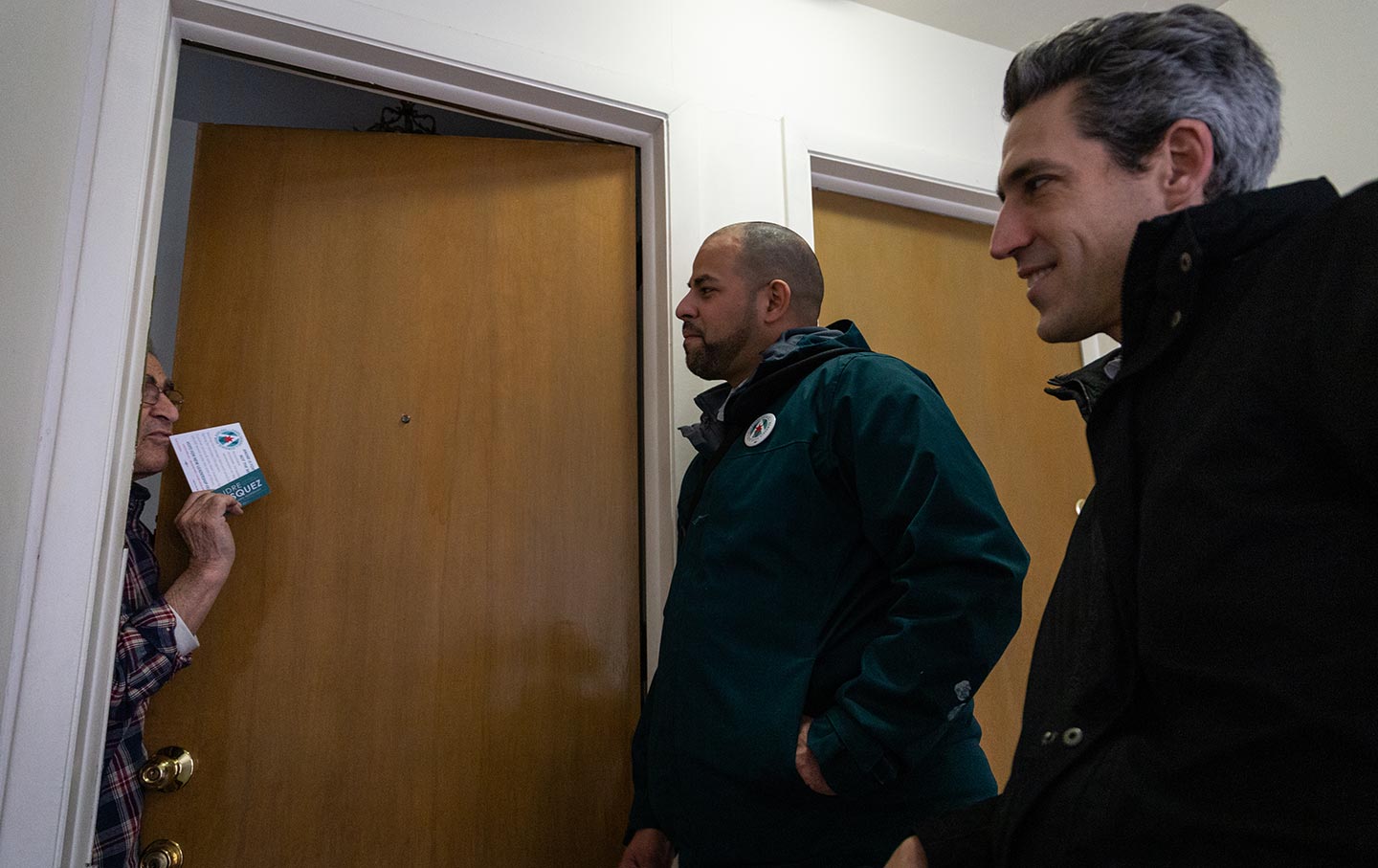 On a Wednesday evening in February, Marta Popadiak, the organizing director for People’s Lobby and Reclaim Chicago, was busy making phone calls to voters in Chicago’s 33rd ward for left-wing Chicago City Council candidate Rossana Rodriguez. With each call, she asked voters to talk about the kinds of changes they want to see in their community. During one exchange, a voter spoke of her fear of violence.

“She said, ‘I got this mailer, and it’s saying that Rossana wants to defund the police, and I’m worried that that would make our community less safe,’” Popadiak recalled, adding that she, in turn, asked the voter to share more about why she was so concerned. Popadiak then described how people are told that police are the way to keep communities safe, but that this strategy is not actually working.

“I said that Rossana had worked with youth, and her students felt safest when they were getting support and investment, mental-health care, access to healthy food, and adults who cared about them,” Popadiak added. The voter said she liked what Popadiak was saying about Rossana and generally felt like she was ready for a change.

This kind of political education, which connects people’s immediate concerns and experiences with transformative visions for the kind of world we want to build, has played a significant role in electoral work that has been taking place in Chicago over the past few years. This work culminated in major wins for left candidates in the elections that finished this week. Six unapologetic progressives­—Andre Vazquez, Jeanette Taylor, Matt Martin, Byron Sigcho, Daniel La Spata, and Maria Hadden—are joining the City Council, and a seventh—Rossana Rodriguez—is ahead by a razor-thin margin as absentee ballots are counted. The number of aldermen with left politics in the City Council has more than doubled as a result of this election, and as many as six of them (should Rodriguez win) are members of the Democratic Socialists of America.

Two of these newly elected aldermen—Daniel La Spata and Andre Vasquez—are leaders of the People’s Lobby and of Reclaim Chicago. The People’s Lobby is a grassroots-membership organization dedicated to developing leaders and organizing for policies that put the needs of people and the planet before the interests of big corporations. Reclaim Chicago, which was born out of a partnership between the People’s Lobby and National Nurses United, is committed to building a movement for racial, economic, and environmental justice and electing candidates who will be leaders in that movement. (I serve as executive director of both organizations.)

Together, both groups trained La Spata and Vasquez as leaders and candidates and launched their campaigns with support from our broader membership base, who knocked on thousands of doors and made thousands of phone calls to voters. Both defeated corporate-backed incumbents who outspent them by wide margins, La Spata in the first round on February 26 and Vasquez in the runoff on April 2. La Spata was outspent by a measure of 10 to 1, while Vasquez was outspent 7 to 1. Other City Council wins were fueled by an impressive array of labor and community organizations, including United Working Families, Grassroots Illinois Action, 33rd Ward Working Families, SEIU, the Chicago Teachers Union, and more.

This cycle, La Spata, Vasquez and other winning candidates ran unapologetically leftist campaigns of the kind we have not seen in decades. For too long, progressive candidates have taken pro-police positions, in part because significant numbers of voters in low-income communities of color have supported increased policing as a solution to crime and violence. In 2015, progressive mayoral candidate Chuy Garcia and a number of candidates for alderman considered progressive—including most of Reclaim Chicago’s 2015 slate—supported or even campaigned on promises to hire up to 1,000 new police officers. This cycle, the Black Lives Matter movement changed the conversation, and left candidates campaigned on a very different message: that the Chicago Police Department is a racist institution that does not actually make communities safe, and that investment in our communities is the best way to address public safety.

Concerns around failing infrastructure and constituent services were also central to this year’s local elections. In prior cycles, campaigns took a more technocratic approach, focusing on the need for effective administration and responsiveness. This year, La Spata, Vasquez, and other progressive candidates got to the root of many residents’ frustration by emphasizing the way comprehensive underfunding and privatization had undermined these crucial public goods.

The place where candidates and their campaigns connected voters’ concerns with a broader vision of social transformation was through direct conversations with voters. Many of these took place during door-to-door visits with voters; others took place over the phone.

The suggested talking points for Vasquez volunteers who fanned out across the district to move voters on public safety illustrate the point. They began: “Andre believes we need to build a city where everyone feels safe and secure no matter what block they live on. This means investing directly in communities where people feel they have no opportunity. This means reforming our criminal-justice system to focus on bringing people back into their communities healthily. Overall, this means trying new things, because what we’ve been doing does not work.”

We also had deep conversations about the connection between Chicago’s decaying infrastructure and the need for more resources to improve that infrastructure. Reclaim Chicago organizer Morgan Oliver talked with a voter in the 1st Ward who was concerned about sidewalks. As Oliver asked for more details, it turned out the voter used a wheelchair and was upset that too many sidewalks lack curb cuts and are full of bumps and cracks. “She said, ‘I don’t feel safe on these sidewalks,’” Oliver recalled. “I was able to talk with her about the larger issue of electing folks who have people’s best interests in mind and actually want to invest money in our communities to fix things, and she was down to vote for Daniel.” Morgan made the case that we need to fight for the resources that it will take to build infrastructure that works for everybody.

The movement in Chicago is going to face many challenges. Among the top: a new mayor with a very mixed record on policing who was backed by large portions of the city’s elite. But numerous groups remain committed to a transformative vision of what the city can be. And if we build on this moment and continue to talk to thousands of people about a vision of a transformed society—one that connects with people’s daily experiences and deeply felt needs, and give them the opportunity to act on that vision both at the ballot box and in the streets—we can build a better city and a better world.