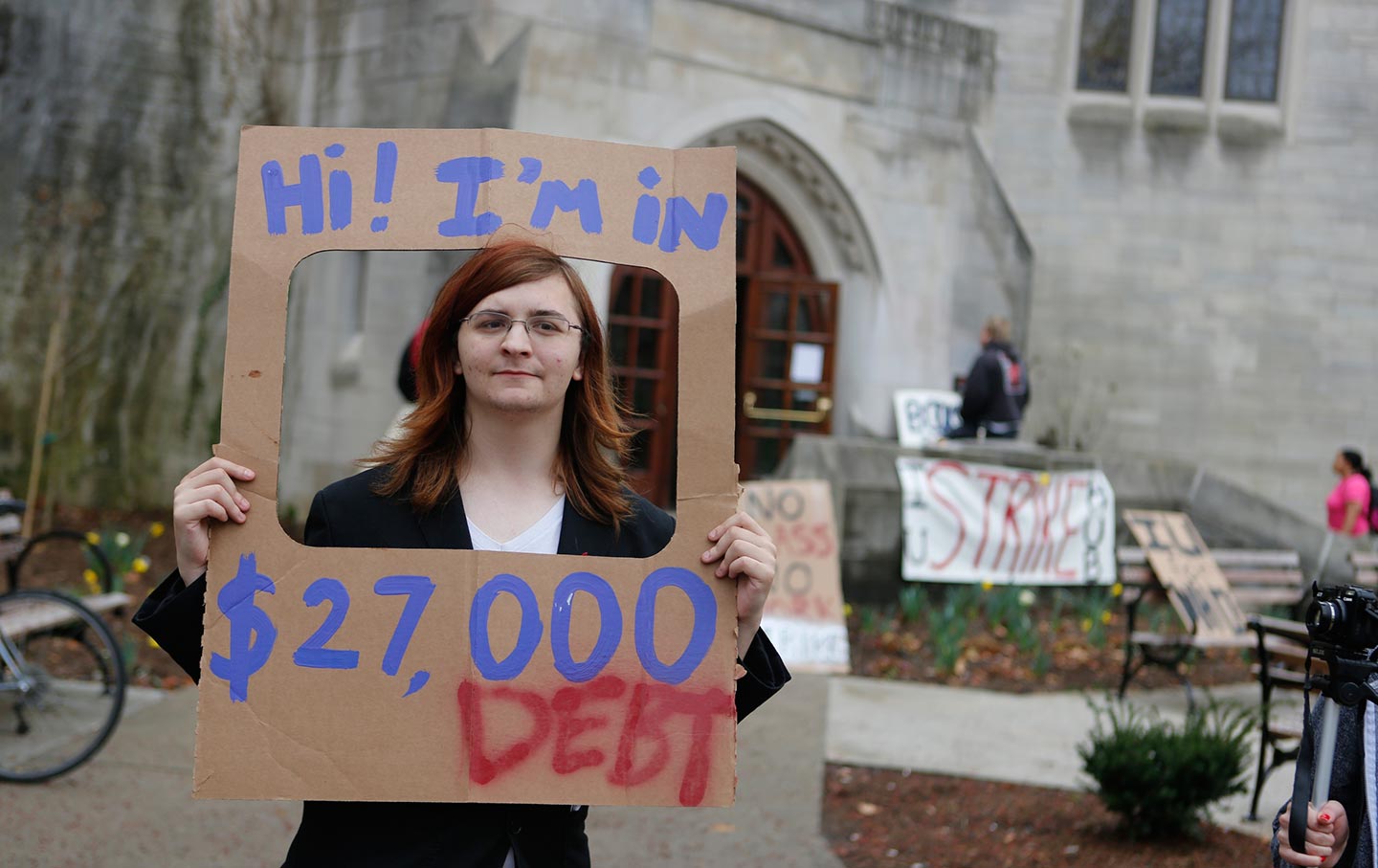 As students settle into the new school year, an increasingly dire and visible crisis should become a high priority for progressives: the student-debt crisis. With 44 million Americans now shouldering $1.5 trillion in debt, there are compelling political and economic reasons to end this drag on our nation’s well-being. It’s time to cancel all outstanding student debt.

Data for Progress polled on legislation, currently co-sponsored by 19 members of Congress, that would reverse Trump’s tax cuts and use the money recouped to finance the zeroing out of outstanding federal student-loan debt. The survey found this a popular idea, with net positive support of 6 percent (41 percent in support, 35 percent opposed) overall. Most important to the current political moment, it has strong support (55 percent in support, 25 percent opposed) among student-debt holders, a group that makes up approximately one in five potential voters. Student-debt holders are more progressive than the general public, but they also report that they are less enthusiastic about voting in this year’s elections, according to our polling. The political message seems clear: Student debt is a potent issue that has the potential to drive turnout and influence votes, in 2018 and beyond. Individuals holding student debt may well decide which party will control the House of Representatives next session.

Analysis of the 2016 Cooperative Congressional Election Studies (CCES) survey suggests that many pundits misunderstand the student-debt trap. Economist Justin Wolfers is a good example—for years, he has offered that student-debt holders are “kids,” assumed that they earn more than others, and insisted “that the proponents can’t find a single economist to support this idiotic idea.”

(Here are four, for starters.)

Despite Wolfers’s characterization, student debt affects people of all ages—even some who qualify for Social Security. In 2015, 114,000 student-loan debtors were subject to Social Security garnishment, according to the Government Accountability Office (GAO), and CCES data suggests that one in five people responsible for paying off a student loan is aged 50 or over. Forty-seven percent of voting-eligible adults are over 50.

Although many observers see student debt as a problem for middle-class college graduates, the numbers show that more than half of studen-debt holders over 26 have not completed a four-year degree. These borrowers have student debt but lack the economic benefits of a four-year college degree.

And the moral case for student-debt cancellation is equally compelling. Today’s student-debt trap has been driven by exploitation. According to a recent study that tracked students who enrolled in college in 2004, nearly 90 percent of the students at for-profit institutions borrowed for their education. And these students defaulted at a rate of 52 percent, compared with 26 percent at community colleges. Moreover, for-profit colleges account for about 35 percent of all student-loan defaults, even though they account for only about 10 percent of college students.

“Right from the start, the student-loan system was rigged to work for the industry players who profit from it,” said Julie Margetta Morgan, author of the Roosevelt Institute report Who Pays, “The result is an ever-increasing volume of outstanding debt, rules that allow collectors and servicers to gouge struggling borrowers, and virtually no repercussions for colleges, loan servicers, or debt collectors when they fail students and borrowers.”

Activist Melissa Byrne said her involvement with this issue dates back to a speech given by the Rev. Jesse Jackson eight years ago. When Jackson asked who in the audience had student debt, Byrne raised her hand. But when he asked how much student debt she had, Byrne says she was “mortified” by the question and refused to answer. Jackson told her that, as long as she remained ashamed of her student debt, banks had all the power.

When Rev. Jackson asked again, Byrne says, “I told him half the amount,” adding, “Shame is still a powerful tool over folks.”

The economic case is also powerful. A recent study by the Levy Institute found that student-debt cancellation—that is, the cancellation of all $1.4 trillion in currently outstanding student loans—would spur economic growth and create between 1.2 and 1.5 million jobs per year in the first few years. A proponent of cancelling the debt, economist Marshall Steinbaum of the Roosevelt Institute, noted, “We shifted the cost of education to individuals and simultaneously required anyone who wanted a job to get a degree and to finance that degree with student debt…. [A]ll we’ve managed to do is shift the cost of job training from employers to workers while wages stagnated.”

Under Trump, the modest positive gains made by the Obama administration on the debt problem have been almost entirely reversed. And this makes student debt cancellation even more politically compelling: It provides tangible and immediate benefits for both borrowers and the nation as a whole, and best of all, it is an action that cannot be undone.

“I have had to take out and repay student loans. I know the burden they pose, not just on young people but their families,” said Democratic Representative Ro Khanna (CA-17), a co-sponsor of student debt cancellation legislation. “Some are paying these loans back into their 50s and 60s. No American should have to go into that kind of debt to pursue education. By finding ways of freeing our young folks of debt, we will unleash their potential to contribute to our nation.”

Student debt forgiveness is showing up on the 2018 platforms of Democrats—establishment and insurgent alike—in closely watched races across the country. Insurgent-turned-Democratic-nominee Alexandria Ocasio-Cortez is expected to join the House representing her New York City district next session. Ocasio-Cortez’s run includes a call for “a one-time policy of student debt cancellation, in which the federal government cancels the loans it holds directly and buys back the financing of privately owned loans on behalf of borrowers to liberate generations of Americans trapped in student loan debt and held back from participating in the greater US economy.”

Minnesota, a state that ranked among the highest on the Data for Progress student-debt-burden scale, was also among the most supportive of student-debt cancellation. Ilhan Omar, the Democratic nominee for the US House in the heavily Democratic fifth district, told us, “Instead of providing a tax cut to the top 1 percent, we should cancel the $1.4 trillion dollars in student debt.”

Student-debt cancellation isn’t just an issue in safe Democratic districts. Red-to-blue candidates—Dems hoping to replace GOP incumbents—see the debt issue as a way to mobilize young voters who often stay home in midterm elections. In Nebraska’s Second Congressional District, Kara Eastman talked openly about the way student debt has affected her community. “Our student loan default rate is too high because the system has become a debt trap for millions of Americans,” she said. Eastman told The Nation that a close friend of hers graduated law school with so much student debt, it derailed his hopes of doing public interest law. If elected, she pledged to work for student debt cancellation because “students should get the same breaks as corporations.”

In California’s 25th district, which covers parts of Los Angeles and Ventura Counties, 31-year-old Democrat Katie Hill is also campaigning with the debt crisis in mind. “In a country with this much wealth,” she said, “we should explore all possible paths, including debt cancellation, to get our generation to a financial place where they can put money into our economy and housing market, instead of being endlessly bogged down in high-interest education loans.”

After a close loss this past August in the Ohio 12th Congressional District special election, Democrat Danny O’Connor believes that a path to victory in November (he is running again in the general election) will mobilize the college students who were away for summer vacation during the special election. “In Congress,” he told The Nation, “I will support measures to restore the idea of affordable education as a cornerstone of the American dream, including student-loan-debt cancellation for those who have invested in themselves and in their community.”

We have created a downloadable one-pager that voters, candidates and campaign managers can use to see how student-debt cancellation would affect their district. We also include data on turnout among young people, to show how much candidates could potentially benefit from mobilizing the nonvoting population. Data for Progress, in conjunction with Freedom to Prosper, has also created a student-debt-burden index for every congressional district and state.

As the midterms quickly approach, Democrats need to embrace policies that will mobilize their base. Student debt has reached such epic proportions that it is dragging down the economy and stifling opportunity. The solution must be more than simply reform. It must be abolition. Cancel student debt.