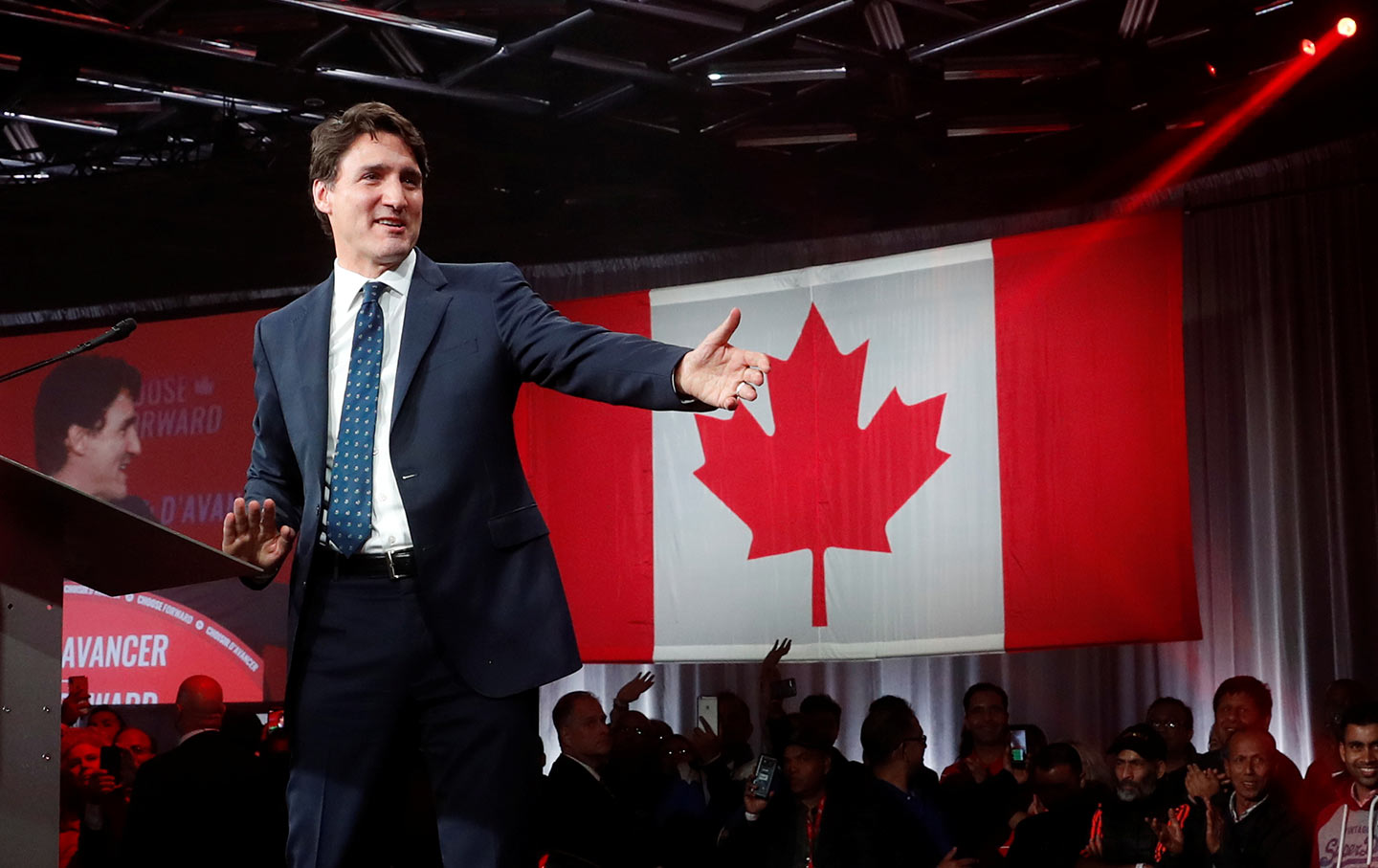 In a 1980 essay for The Nation, “Notes on the House of Bondage,” James Baldwin expressed his disappointment in that year’s presidential candidates and doubted in the power of the vote as the only way to make change. “If we’re to change our children’s lives and help them to liberate themselves from jails and hovels—the mortal danger—in which our countrymen have placed us, the vote does not appear to be the answer,” he wrote. “It has certainly not been the answer until now.”

I found myself reflecting on Baldwin’s essay during the run-up to Canada’s federal election last week. The campaign trail was a hot mess: Numerous scandals followed the candidates, including the photos of incumbent Liberal prime minister, Justin Trudeau, in blackface, which came to light shortly after an ethics scandal. Trudeau’s Conservative challenger, Andrew Scheer, made a cofounder of a white supremacist site his campaign manager. The New Democratic Party’s Jagmeet Singh faced racist incidents every couple weeks, and the Greens’ Elizabeth May struggled to stay on message after one of her party’s candidates’ pro-life views came to light. Meanwhile, the happily xenophobic, newly formed People’s Party of Canada was receiving an ungodly amount of coverage.

Despite widespread disillusion with his first four years as prime minister, Canadians went on to reelect Trudeau on October 21, giving his Liberal Party a minority government. But in the province where I live, Alberta, not a single Liberal member of Parliament was elected—nor were any elected in Saskatchewan, our neighbor. The NDP didn’t fare much better in the Prairies, only managing to hold on to one seat in Alberta and Saskatchewan, and the separatist party Bloc Québécois swept Quebec. These results are largely due to our faulty, first-past-the-post voting system; in Alberta, they also reflected high unemployment and the recession caused by the drop in oil and gas prices—a big issue in a province that is one of the biggest oil-producing regions in the world. Many focused the blame on Trudeau. Blame that would lead some pundits and politicians to start to talk seriously about the western provinces separating from the rest of Canada—a theoretical “Wexit.”

Winning Hearts and Minds, but Not the Canadian Election

Trudeau’s Blackface Is Appalling, and So Are His Policies

This entire electoral process felt like such a spectacle, the results so compromised, that it has made me question whether party politics are an effective way for Canadians to bring about social change. Canada is a nation of contradictions: We present a humanitarian image to the world, but our country is guilty of continuous indigenous genocide, as the ongoing epidemic of murdered and missing indigenous women was described by a federally appointed review in 2019. Where the last residential school—assimilationist institutions that the Canadian government forced indigenous children to attend—closed only in 1996. Where, in the prairie province of Saskatchewan, 92 percent of incarcerated boys and 98 percent of incarcerated girls are indigenous, but indigenous people make up only 16 percent of the overall population. Where the number of black Canadians in prisons went up 70 percent between 2006 and 2016.

Many Canadians felt optimistic when Trudeau first came to power in 2015. Alberta, where I grew up and still live today, was recovering from a major recession: It’s the heartland of Canada’s energy production, and between 2014 and 2015, the price of oil crashed from $100 a barrel to $30. Like many of those around me, I felt the immediate effects of the economic slump, as my family members started to lose their jobs. During the campaign for the 2015 election, Trudeau promised a clean transition from oil, action on climate change, and reconciliation with indigenous communities, and that this would be the last election under the current voting system. His party swept into power with a clear majority.

By the time the next election came around this past Monday, October 21, the Liberal government had spent $4.5 billion Canadian on an oil pipeline, delayed a settlement for indigenous children, and refused to implement electoral reform.

Canada’s first-past-the-vote electoral system means that the candidate in any given riding (electoral district) with the most votes wins, even if it’s with only 30 percent of the vote—which can lead to a popular vote that doesn’t match the seat distribution in Parliament. This flawed system puts voters like myself—leftists in conservative strongholds—in a difficult situation, where we are shamed into “voting strategically” and “combining progressive votes.” In Alberta, that means that some voters who might go for the NDP or the Greens are encouraged to vote Liberal, as if any vote for a smaller party would be handing the election to the Conservatives.

Not only that, but our political media culture makes it incredibly difficult to have proper conversations about race and discrimination. This manifests itself in the very Canadian denial of systemic discrimination, and an electoral circus dominated by white people. This was perhaps most evident in the immediate aftermath of the Trudeau blackface scandal: During the first press scrum after the story broke, the mainly white journalists missed the mark, asking only about the photos’ political implications rather than asking if Trudeau understood what blackface signified, or if he knew about its history in Canada.

Most Canadians are blissfully unaware of this history. They are unaware that the white, French Canadian composer of our national anthem, “O Canada,” was also a blackface minstrel performer. They are unaware that the Klu Klux Klan was powerful enough in the Prairies during the 1920s to sway elections. Trudeau himself demonstrated his lack of knowledge of this history during his celebration speech last week, when he said that Wilfried Laurier—who had attempted to ban black immigration to Canada in the 1910s—was one of his favorite prime ministers.

Being a close observer of all this made me wonder if it was even worth voting in this election. Wouldn’t my time be better spent on other forms of democratic action, such as writing letters, organizing my community, coaching kids, or focusing on public outreach and research?

I decided to vote because I wanted to support Katherine Swampy, the indigenous NDP candidate in my riding; when she had last run, in a provincial election, she had faced a torrent of racist abuse. (She told reporters that one person had even posted on Facebook, “I support Katherine Swampy and I support the NDP. It’s just too bad she has a higher chance of turning up missing than she does of winning this constituency.”) As I rode my bike the few blocks to my polling station on the night of October 21, I could see my neighbors watching the election on their televisions. The polls had already closed in Atlantic Canada, and the Liberals held a small but comfortable lead. I started to wonder if talk of a “blue wave”—a rush toward the Conservatives—was overblown.

In my riding, Edmonton Centre, my options included the mainstream parties (Green, Liberal, NDP, and Conservative), as well as fringe parties such as the Marxist-Leninists and long-time satirical protest vote, the Rhinoceros Party. I hesitated; I was tempted to vote strategically, casting a vote for the Liberal candidate instead of the NDP. But then I thought, If I’m going to be shamed into voting, then I would at least vote with my morals. I drew an X next to Katherine Swampy’s name.

As I rode my bike away from the polling station, I wound through Edmonton’s river valley, enjoying some moments of silence. I passed wild hares, and coyotes walking slowly along the bike path. The coyotes dashed away as I biked closer. They could have easily harassed me, but perhaps my size made me intimidating; even though they had the numerical advantage, they let one bigger animal disturb their night. This made me think of strategic voting, and how we often sideline our ideals because of some bigger unknown.

I was nervous to hear the results: What if my vote for the NDP had made the difference in my riding? What if, because of me, the Liberal candidate lost by just one vote, and we elected a Conservative MP who would hold the balance of power? Would I feel guilty for vote splitting?

At the end of the night, the riding where I had voted flipped from Liberal to Conservative. The CBC’s electoral map showed Alberta washed away in Conservative blue, except for one tiny, NDP-orange dot. By the end of the night, early projections had been proven correct: the Liberals had won, just barely—with less than a third of the popular vote. (The Conservatives had actually won more votes, but they still snagged fewer seats.) Edmonton-Strathcona’s NDP candidate, Heather McPherson, was the only non-Conservative to win in either Alberta or Saskatchewan.

Heather Mallick, a columnist for the national newspaper, The Star, published a piece on election day saying that a person who doesn’t vote but then complains about the results is “the person decency forgot.” I think about how absurd this all is. That casting a vote once every four years for a candidate who may lose and be forgotten is seen as the most important thing to do. And that other methods of political engagement—such as protesting or directly petitioning decision-makers—are not given the same blanket support.

James Baldwin was skeptical as to whether black votes would count, but he organized voter registration drives during segregation anyway—drives that he called, in his Nation essay, “too crucial and profound a necessity even to be argued.” At the time of writing, he was planning to vote for Jimmy Carter, but he made it clear that this was not “an endorsement.” Voting was, he wrote, a “cold calculated risk, a means of buying time.” For Baldwin, the ideal outcome of the vote was that “the machinery is made to pause.”

That is exactly how I feel. That, during this election, our political machine and our disappointment with the last four years were made to pause. That we, as progressives and the working class, may have dodged a bullet by avoiding a Conservative government, but we are still stuck with a prime minister who we already know will fail to live up to expectations.

I hope this pause allows us to mobilize and leads to change. Until then, I’ll go back to planning my next democratic exercise: a protest.