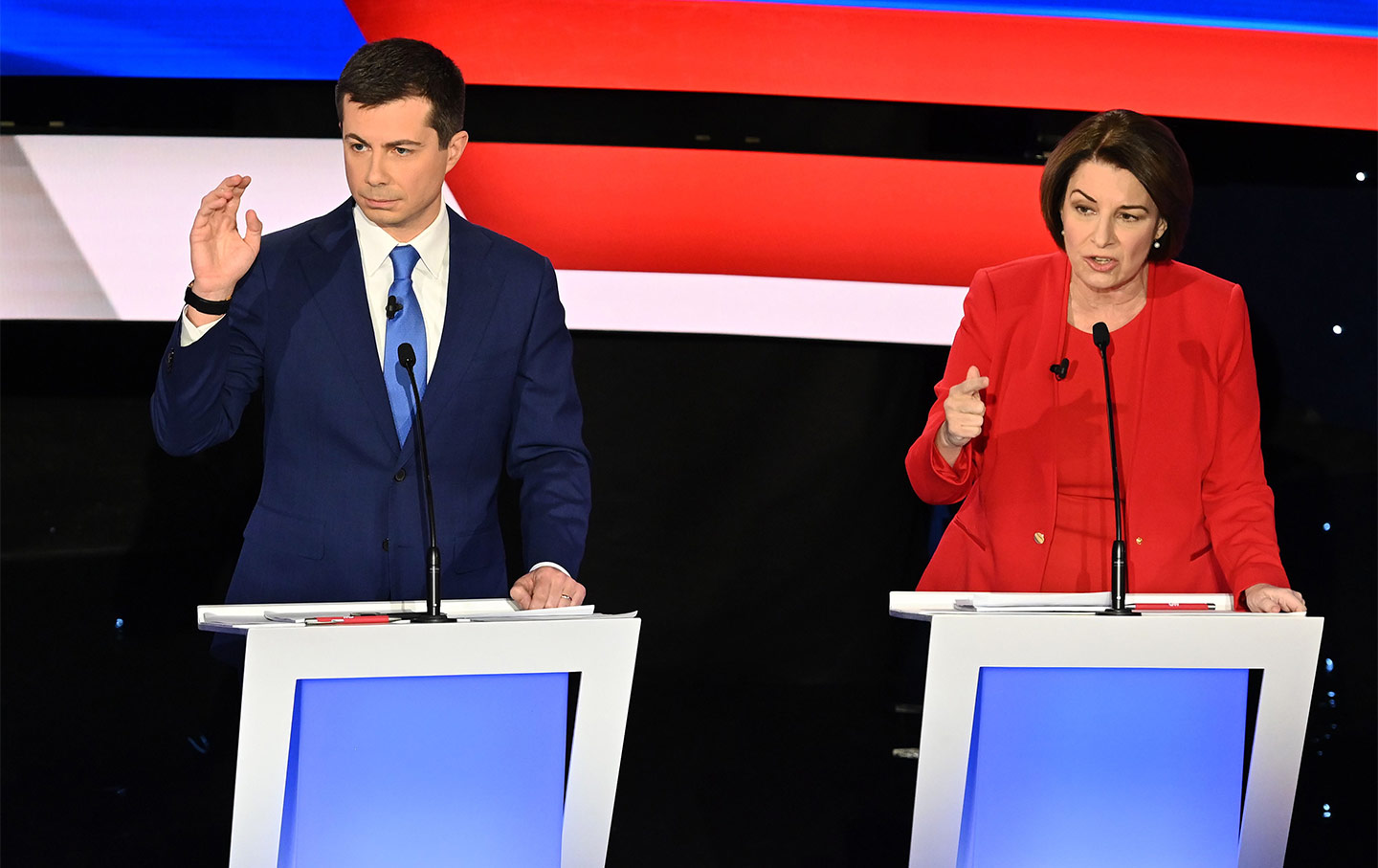 I’ll admit, I didn’t enjoy seeing an all-white debate stage Tuesday night. It was nice that two of the six Democratic candidates who qualified were women—Senators Elizabeth Warren and Amy Klobuchar—but I still missed the women who were not there, Senators Kamala Harris and Kirsten Gillibrand, as well as the two men of color who dropped recently dropped out, Senator Cory Booker and former Housing and Urban Development secretary Julián Castro.

The upside of having a cozier debate is that people could really stand out. But the two people who most needed to—Klobuchar and former South Bend mayor Pete Buttigieg—did not.

I’m on record saying that Klobuchar won the December debate. And some of what made her shine there was evident in Des Moines. Unlike the other women in the race, Klobuchar seems to have some kind of Teflon that means she can attack other candidates without hurting herself—Warren, Harris, and Gillibrand have all paid, in different ways, for going on the offensive.

But when Klobuchar demanded that Bernie Sanders “show how you’re going to pay for things,” it underscored that she hadn’t asked about how to pay for the military action she supports. She also was the lone candidate on the stage to play deficit hawk, which is not a good look for any Democrat in 2020. Her closing pitch was corny: “If you are tired of the extremes in our politics and the screaming and the shouting,” she said, “you have a home with me.” It definitely did not help when she tried to give a shout out to Kansas’s Democratic Governor Laura Kelly, and then appeared to briefly go blank on her name.

If Americans Die in the Escalating Iran Crisis, Remember That Mike Pompeo Called It ‘a Little Noise’

Buttigieg had a few good moments, especially relating to the issue of endless war, as the only one on stage to actually serve (he was a Naval Intelligence Officer deployed to Afghanistan for 10 months). He blasted Trump’s reckless foreign policy, given that he was “the very president who said he was going to end endless war, who pretended to have been against the war in Iraq all along.” Every Democrat should hammer Trump on that in every interview.

Buttigieg also got one of the toughest questions of the night—but a fair question—from CNN moderator Abby Phillip. Referencing his continued low numbers with black voters, after a year on the campaign trail, she asked: “Is it possible black voters have gotten to know you and have simply decided to choose another candidate?”

To his credit, Buttigieg took it amiably, while ludicrously suggesting that the black voters who “know me best”—in South Bend—support him. The top black leader in South Bend backs former vice president Joe Biden, the city’s Black Lives Matter movement is all in against the former mayor, he’s still facing an uproar over the increasing whiteness of the city’s police department—but Buttigieg was able to claim support from Mayor Quentin Hart of Waterloo, Iowa.

I feel duty-bound to mention that billionaire Tom Steyer was on the stage too. While I admire Steyer’s philanthropy and activism on climate change and impeachment, I feel strongly that he bought his way into the debate, and I have a hard time covering him seriously. And so, for the purposes of this short dispatch, I opt not to. I may return to Steyer’s relative merits or lack thereof in the future. Stay tuned!

Back to Klobuchar and Buttigieg. Here’s the tough news for those (like me) inclined to support a woman: Buttigieg, despite his thin résumé can probably withstand a lackluster debate performance better than Klobuchar, because he has a bigger Iowa staff. Also, he doesn’t have to leave Iowa shortly as Klobuchar does, for the Senate impeachment trial. While the former prosecutor could conceivably make an impression there, as she has in Senate confirmation hearings, especially Supreme Court Justice Brett Kavanaugh’s, senators aren’t likely to speak for a while.

Buttigieg can also theoretically handle an Iowa loss—a loss being generously defined as coming in below the top three—because he has more money than Klobuchar. That’s a sign of his ties to Silicon Valley (and other) business elites, and it’s disturbing. Klobuchar also has no visible electoral path out of Iowa, while Buttigieg has occasionally polled well in New Hampshire, and a decent showing in both places—however unlikely—could serve him well on Super Tuesday.

The truth is, a bad showing in Iowa would likely doom Buttigieg in New Hampshire too. Then come Nevada and South Carolina, where neither he nor Klobuchar seems to be much of a factor because people of color belatedly start to be a factor. So while neither bombed on Tuesday night, they failed to soar, and time is running out. This increasingly looks like a Biden-Warren-Sanders contest, and I have no predictions for how that ends.