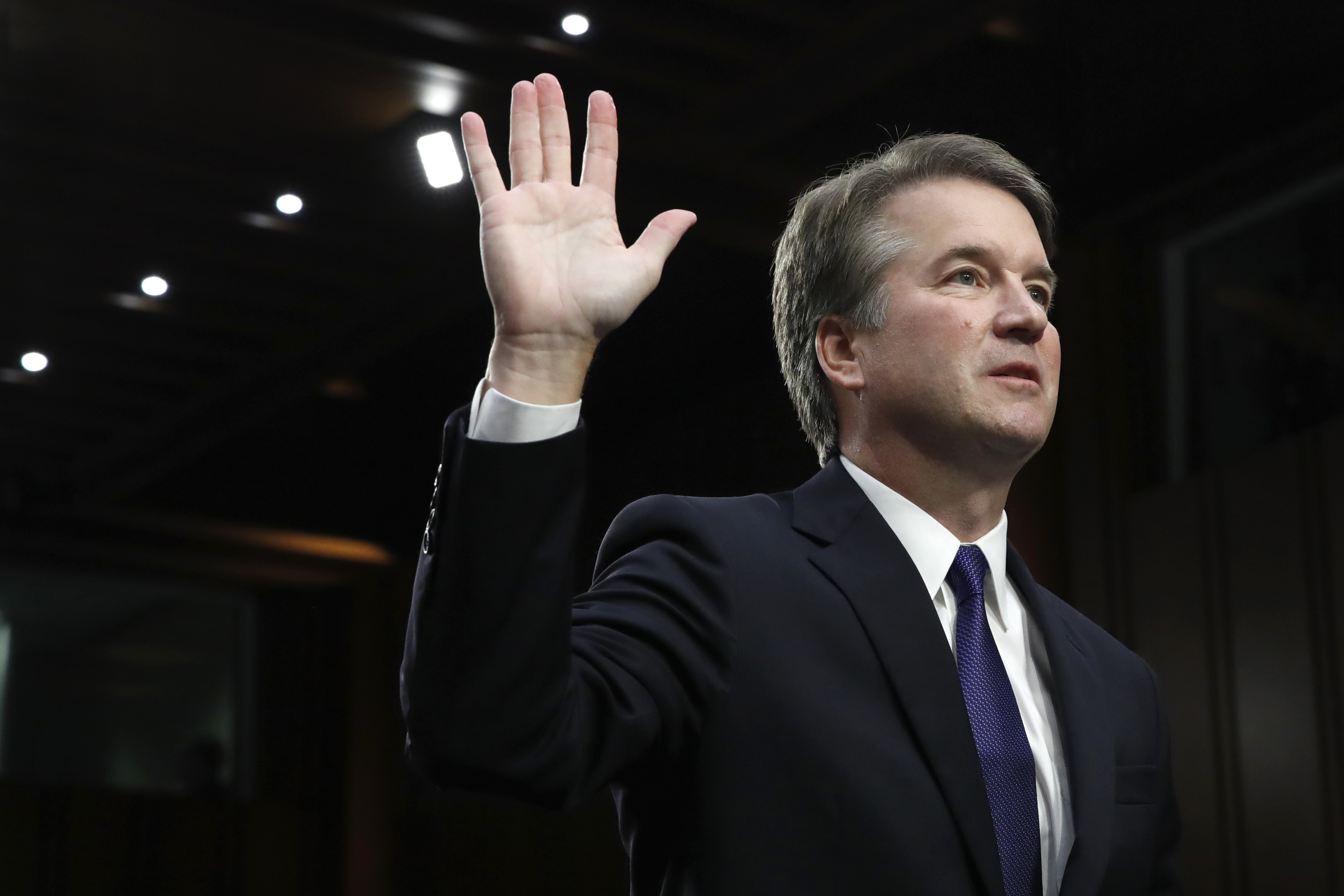 Brett Kavanaugh gets sworn in for his Senate Judiciary Committee hearing on September 4, 2018. (AP / Jacquelyn Martin)

Patrick Leahy, the senior member of the Senate Judiciary Committee and the dean of the current US Senate, is not prone to hyperbole. So when he expresses concerns after the completion of US Supreme Court nominee Brett Kavanaugh’s confirmation hearing about “untruthful testimony, under oath and on the record,” he should be taken seriously.

As the nomination of Kavanaugh has been under consideration, Leahy has focused attention on an incident involving Republican staffers on the Judiciary Committee who, between 2001 and 2003, hacked into the private computer files of six Senate Democrats (including Leahy) and stole 4,670 files, which “they used to assist in getting President Bush’s most controversial judicial nominees confirmed.” The scheme was exposed late in 2003, when The Wall Street Journal published some of the stolen materials, revealing what Leahy describes as a “scandal” that “amounted to a digital Watergate—a theft not unlike Russia’s hacking of the DNC.”

“During all of this,” recalls Leahy, “Judge Kavanaugh worked in the White House Counsel’s Office on judicial nominations. He worked hand-in-hand with (GOP Senate aide Manuel) Miranda to advance these same controversial nominees. Not surprisingly, Judge Kavanaugh was asked extensively about his knowledge of the theft during both his 2004 and 2006 hearings. And I mean extensively: 111 questions from six senators, both Republicans and Democrats.”

Leahy explains that Kavanaugh “testified under oath—and he testified repeatedly—that he never received any stolen materials, and that he knew nothing about it until it was public. He testified that if he had suspected anything ‘untoward’ he would have reported it. At the time, we left it there. We didn’t have evidence to suggest otherwise.” Now, Leahy tells The Washington Post, there is evidence to suggest that Kavanaugh was “not truthful.”

“Judge Kavanaugh’s perjury in the process of obtaining his current position on the US Court of Appeals for the DC Circuit should…lead to his removal from the federal judiciary and should disqualify him from ever holding a future federal office.” —Free Speech for People

Kavanaugh has claimed that he did not suspect the materials he handled, and relied on as a key Bush-Cheney administration aide, were stolen from the Democrats. But Leahy says, “There were numerous emails sent to him that made it very clear this was stolen information, including a draft letter from me.”

Senator Dianne Feinstein (D-CA), the ranking member of the Senate Judiciary Committee, was equally blunt in her conclusion. “Brett Kavanaugh used materials stolen from Democratic senators to advance President Bush’s judicial nominees,” she wrote last week. “He was asked about this in 2004, 2006 and this week. His answers were not true.”

This goes far beyond the Senate debate over whether to confirm Kavanaugh’s nomination for a life term on the high court, which clearly should be delayed until concerns that have been raised regarding the receipt of stolen documents and his alleged perjury can be resolved.

Lisa Graves, who as the chief counsel for nominations for the ranking Democratic member of the Senate Judiciary Committee during the period in question wrote some of the research notes and talking points that were stolen from the Senate server by Republican staffer Manuel Miranda, argued last week in a Slate article that “Kavanaugh actively hid his own involvement, lying to the Senate Judiciary Committee by stating unequivocally that he not only knew nothing of the episode, but also never even received any stolen material.”

Even if Kavanaugh could claim that he didn’t have any hint at the time he received the emails that these documents were of suspect provenance—which I personally find implausible—there is no reasonable way for him to assert honestly that he had no idea what they were after the revelation of the theft. Any reasonable person would have realized they had been stolen, and certainly someone as smart as Kavanaugh would have too.

Because of those lies, Graves suggests, it is necessary to raise the question of “whether [Kavanaugh] should be impeached from the federal judiciary.” Graves is a realist. She understands all the failures and frustrations that are associated with a Congress led by the likes of Senate majority leader Mitch McConnell and House Speaker Paul Ryan. Yet she also understands that lying to the Senate should be a concern for conservatives as well as liberals, for Republicans as well as Democrats.

So, too, does John Bonifaz, an authority on constitutional law who serves as president of Free Speech for People. Bonifaz announced Sunday that the group is “calling on Congress to launch impeachment proceedings against Judge Kavanaugh for committing perjury.”

The impeachment power is most frequently discussed with regard to presidents—especially since Donald Trump took office—but it also applies to federal jurists. Some of the first impeachments, during the presidency of Thomas Jefferson, involved a federal judge from New Hampshire and as associate justice of the Supreme Court.

The Free Speech for People memorandum explains that federal judges “can be impeached and removed from the judiciary for committing perjury. Federal Judge Thomas Porteous was impeached by the US House and convicted (90-6) by the US Senate in 2010 on grounds which included that he ‘knowingly made material false statements about his past to…the United States Senate…in order to obtain the office of United States District Court Judge.’ The Senate subsequently voted to disqualify him from ever holding federal office again.”

Free Speech for People argues that “The Framers of the US Constitution understood that corruption in the process of obtaining a federal office is an impeachable offense. In the constitutional debates over the impeachment power, George Mason asked rhetorically: ‘Shall the man who has practised corruption & by that means procured his appointment in the first instance, be suffered to escape punishment, by repeating his guilt?’ Judge Kavanaugh’s perjury in the process of obtaining his current position on the US Court of Appeals for the DC Circuit, should, as with Judge Porteous, lead to his removal from the federal judiciary and should disqualify him from ever holding a future federal office.”

(John Nichols wrote the foreward to the book The Constitution Demands It: The Case for the Impeachment of Donald Trump (Melville House), to which John Bonifaz contributed, along constitutional lawyers Ron Fein and Ben Clements.)