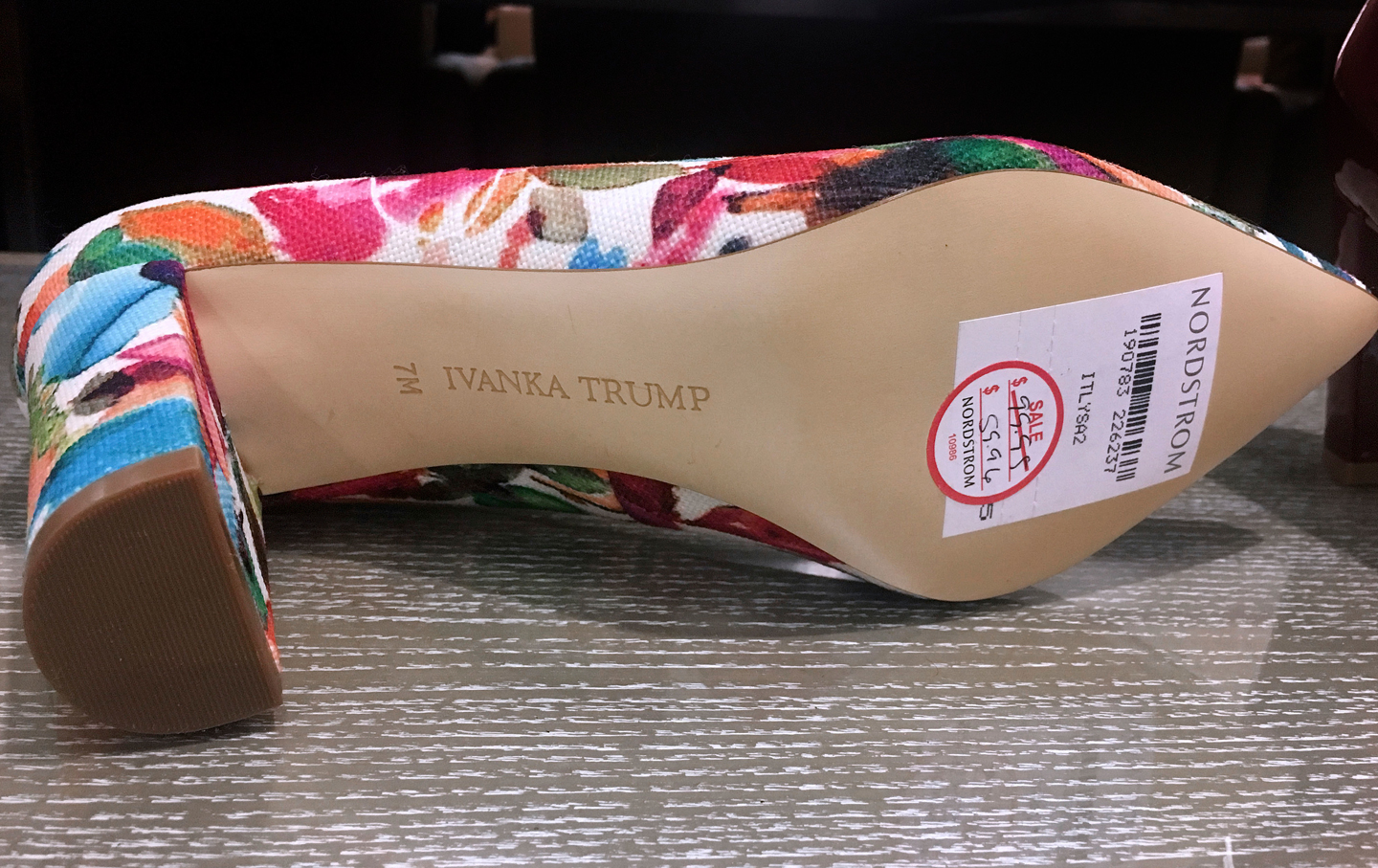 Some might argue that Ivanka Trump has been getting more ink than she deserves. After all, she does not have a formal position in the new administration. She’s just the wife of a senior White House adviser. Yet whenever Ivanka is her father’s subject du jour, it’s instructive. She’s a litmus test on just how far the president will go to get his way on issues of very little importance to governing.

What Can Ivanka Trump Possibly Do for Women Who Work?

This week’s presidential boil-over—concerning Nordstrom’s decision to drop Ivanka’s label—showed us that, even while the president is reportedly uninterested in anything but the simplest of policy discussions, he is more than eager to jump in when the issue touches family—and, more important, family money. The public’s boycott of Ivanka’s fashion line, Ivanka Trump™, may be the only thing about which Trump has ever felt remorse: His political success has become her business problem, if not yet her business failure. Hence his Wednesday tweet rebuking Nordstrom. And, possibly, hence Kellyanne Conway’s Fox appearance a day later, hawking Ivanka’s wares, while speaking from the White House.

Nordstrom is not the only retailer that has dropped Ivanka’s stuff, although it is the largest; as of today, only two Ivanka items are for sale on the Nordstrom website: two sad little pairs of shoes, flat black pumps (the pink ones are sold out), and red high-heeled ankle straps. They are steeply discounted.

In a sense, Ivanka deserves it. She was already prepared at the GOP convention to use the political pulpit for personal promotion rather than policy. Though she made a nice speech, we discovered that the central lesson she learned from her presence there—and from her ensuing heightened popularity—was that being seen on a national stage could be lucrative. It turned out what we were witnessing that day was not the emergence of a new, young leader of the soft-right, as she was portrayed at that moment, but rather, quite simply, a model pimping a little pink dress. The next morning at 7:12 am Ivanka, having barely hung the dress up in her closet and moved on to a new Ivanka Trump™ outfit, tweeted a link to the purchase page for the convention dress on the Macy’s website (Macy’s is still selling PDOTUS’s line). For Ivanka, the convention stage was not a place to begin a political campaign but instead a platform to move forward with a business campaign.

And Trump, too, sees his political ascendancy that way (although he does not wear a little pink dress). We’ve seen this in instances too numerous to mention, most notably his recent banning of travelers from seven Muslim nations, none of which are countries where his company has business interests. While the president is spewing and caviling and spurting all over Twitter about unimportant things like the terrible, unfair Nordstrom, people like Jeff Sessions, Tom Price (2:11 am confirmation), and others are taking over the reins of government.

In other words, although the media—like this article—is wasting ink on Ivanka, there’s a reason for it: It’s the place where Trump and family (and Bannon, no doubt) have led us, and we drink. Like Arnold Schwarzenegger in Sacramento but much more so, Trump in the White House is the very epitome of entertaining ourselves to death. We have a 24-hour reality show called the first family. We wave our little credit cards in protest and stop shopping at Nordstrom, only to enthusiastically swipe our credit cards there when the company drops her.

So what is the political use of boycotting Ivanka Trump’s line? Most boycotts are attempts to change unsavory policies, like land grabs by the British in Ireland, or the refusal to grant African Americans equal rights in the American South, or the poor pay and conditions of farm workers in the American West. The point here, I suppose, is to prevent money from flowing into the coffers of the Trump family, and to stop others, like Nordstrom, from profiting from Trump products. Expressing popular displeasure in this way seems to hurt the Trumps where they are most sensitive: in their pocketbooks (see Melania Trump’s farcical suit against the Daily Mail, also filed last week). But even if every single store that sells Ivanka’s brand should stop offering her line, what policy changes would be achieved?

And where is the boycotters’ sacrifice in not buying at Nordstrom? That’s the thing: To be powerful, a boycott ought to cause at least some discomfort on both sides—or at least they historically have done so. The original boycotts in Ireland in 1880 were hugely dangerous for all involved, as were the boycotts of the civil-rights movement. Even the legendary grape boycott on behalf of the farm workers entailed a sacrifice from citizen boycotters—no grapes. What kind of politics are we engaged in when a boycott means not using a credit card for unneeded purchases, and then afterwards, while crowing over victory, using a credit card for unneeded purchases? It’s all so easy—like drone warfare.

Is this the best use of our political time and energy?

The end result of the Nordstrom affair was that Ivanka lost the contract, and in the two days after Trump posted his anti-Nordstrom tweet, the department store’s stock price rose by almost 7 percent. In our excitement at our small victory over Ivanka Trump ™, we reacted by shopping, putting a new $115 million into the pockets of Nordstrom’s two largest individual shareholders, both of them billionaire grandchildren of the chain’s founder.

There’s something distasteful about shopping as a political statement. Yes, it’s a rebuke to Trump that will offend him, but where does it lead a movement?’