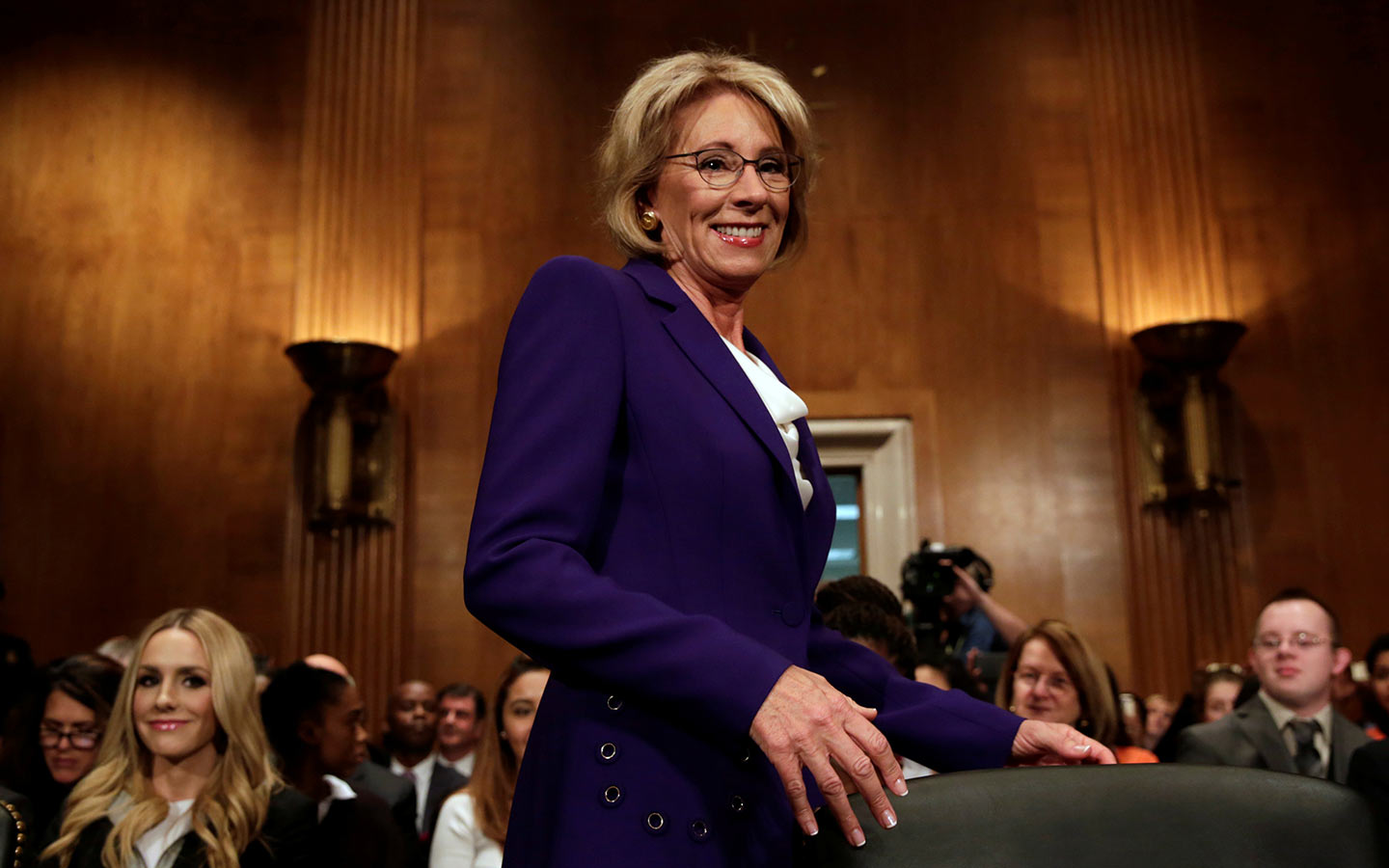 When Education Secretary Betsy DeVos was confirmed, the major fear was that she would radically overhaul the public-education system and institute a broad school-voucher program. It turns out that requires congressional action that hasn’t been forthcoming, at least yet. But DeVos has been able to use administrative powers to reward wealthy friends and facilitate fraud against students.

DeVos’s latest move has been to end a partnership with the Consumer Financial Protection Bureau. The Education Department had been sharing information with the CFPB on companies that collect payments on federal student loans (also known “servicers”), under a memorandum of understanding between the two agencies. Those reports will stop at the end of September, according to a letter from two DeVos underlings. In the letter, the Education Department complained that the CFPB’s “intervention” in the student-loan market “expand[s] its jurisdiction into areas that Congress never envisioned…. to include the Department’s federally contracted loan servicers.”

Let’s first stipulate that private student-loan servicers shouldn’t exist. The government issues these loans directly, then contracts with an outside business to take the payments. The government runs the largest collector of payments in the world, also known as the IRS. Do we really think the government doesn’t know how to process a check?

That’s compounded by the fact that these private servicers are bad at their job. They have faced hundreds of millions of dollars in fines for pushing borrowers into costlier repayment plans, hiding information about cheaper options, overcharging active-duty military, and harassing borrowers after co-signers die, to name just a few examples. So the CFPB correctly sought to supervise these entities, as they have the authority to do. Student loan servicing is a consumer financial transaction, and the CFPB has jurisdiction over debt collection and credit reporting, along with Dodd-Frank’s prohibition on unfair, deceptive, or abusive acts and practices. Dodd-Frank even charges the CFPB to supervise companies “servicing loans” and “collecting debt related to any financial product or service.”

The CFPB is suing Navient, one of the largest servicers contracted by the Education Department, for “failing borrowers at every stage of repayment” and cheating hundreds of thousands of student loan debtors. (Navient has rejected these allegations, while also admitting in court that “there is no expectation that the servicer will act in the interest of the consumer.”) And the CFPB’s work has filled a role traditionally vacated by the Education Department, whose own inspector general found in 2014 that the department didn’t even track borrower complaints, let alone engage in actual oversight.

In other words, there’s no basis for the Education Department to block the CFPB from doing its job. As CFPB Director Richard Cordray explained in a letter back to DeVos, “The HEA [Higher Education Act] does not supersede” the CFPB’s ability to protect borrowers. Cutting off the CFPB only relieves servicers from the hassle of following the law.

Thirty-nine Democratic members of Congress, led by Senator Sherrod Brown and Congresswoman Maxine Waters, wrote to DeVos yesterday, rejecting DeVos’s claim that the Education Department has exclusive authority to oversee student-loan servicing. Their objection is based on a plain reading of the Dodd-Frank legislation they themselves wrote. “Without CFPB oversight, we are deeply concerned this backwards step will allow student loan servicers to more easily take advantage of borrowers,” the lawmakers wrote. They asked DeVos to reinstate the memoranda of understanding and begin to work again with the CFPB.

DeVos claimed in a recent hiring announcement that her office has instituted stronger protections for students against “bad actors.” But look at whom she hired to perform the task. The new head of the Office of Federal Student Aid is a financial-services executive named A. Wayne Johnson. To run the office’s fraud-enforcement unit, which was conceived under President Obama’s watch, DeVos chose Julian Schmoke, a former dean at the for-profit DeVry University, which has been fined repeatedly by state and federal regulators for misleading students through deceptive marketing and false statistics.

Schmoke is at least the third for-profit college expat to join the Education Department under DeVos’s tenure. Senior adviser Robert Eitel did compliance and legal services for Bridgepoint Education, an operator of several for-profits, also under government investigation during his tenure. And Carlos Muñiz, DeVos’s general counsel, provided “consulting services” while at his corporate law firm to for-profit Career Education Corp.

DeVos has moved to protect for-profit colleges with the same vigor employed to protect student-loan servicers. She’s put on hold new rules to shut down deceptive programs that fail to provide students with a useful education, and to ensure that students defrauded by their colleges wouldn’t have to pay back their loans. The changes also rolled back a ban on mandatory arbitration rules in student agreements with for-profit colleges. Eighteen states have sued DeVos over this delay. The Trump administration has also shut down an interagency task force overseeing for-profit colleges. DeVos even tried to reinstate federal aid for the Charlotte School of Law, a corrupt for-profit that hired her former adviser, before state regulators in North Carolina shut the school down.

The department has also stopped accepting relief applications from defrauded for-profit students, and put over 65,000 existing applications from students into limbo. It haven’t approved a single request for borrower relief, and it told a federal court August 28 that any decisions would take another six months. Thousands of students tricked into meaningless degrees cannot get on with their lives because of this holdup.

Lobbyists for the industry, including Newt Gingrich, have gotten nearly everything on their wish list since DeVos entered power. Three industries left for dead before the Trump era have been resurrected by friendly policies: private prisons, coal-mining operations, and for-profit colleges.

This is all, aside from the rollback on guidance about campus sexual assault, and an acting assistant secretary for civil rights who assured college administrators that oversight would be far friendlier in the future.

So while legislative action has been stymied, DeVos has had no problem pushing her agenda in Washington—one primarily concerned with helping private-sector pals abuse students for profit. And she’s not even really trying to hide it.