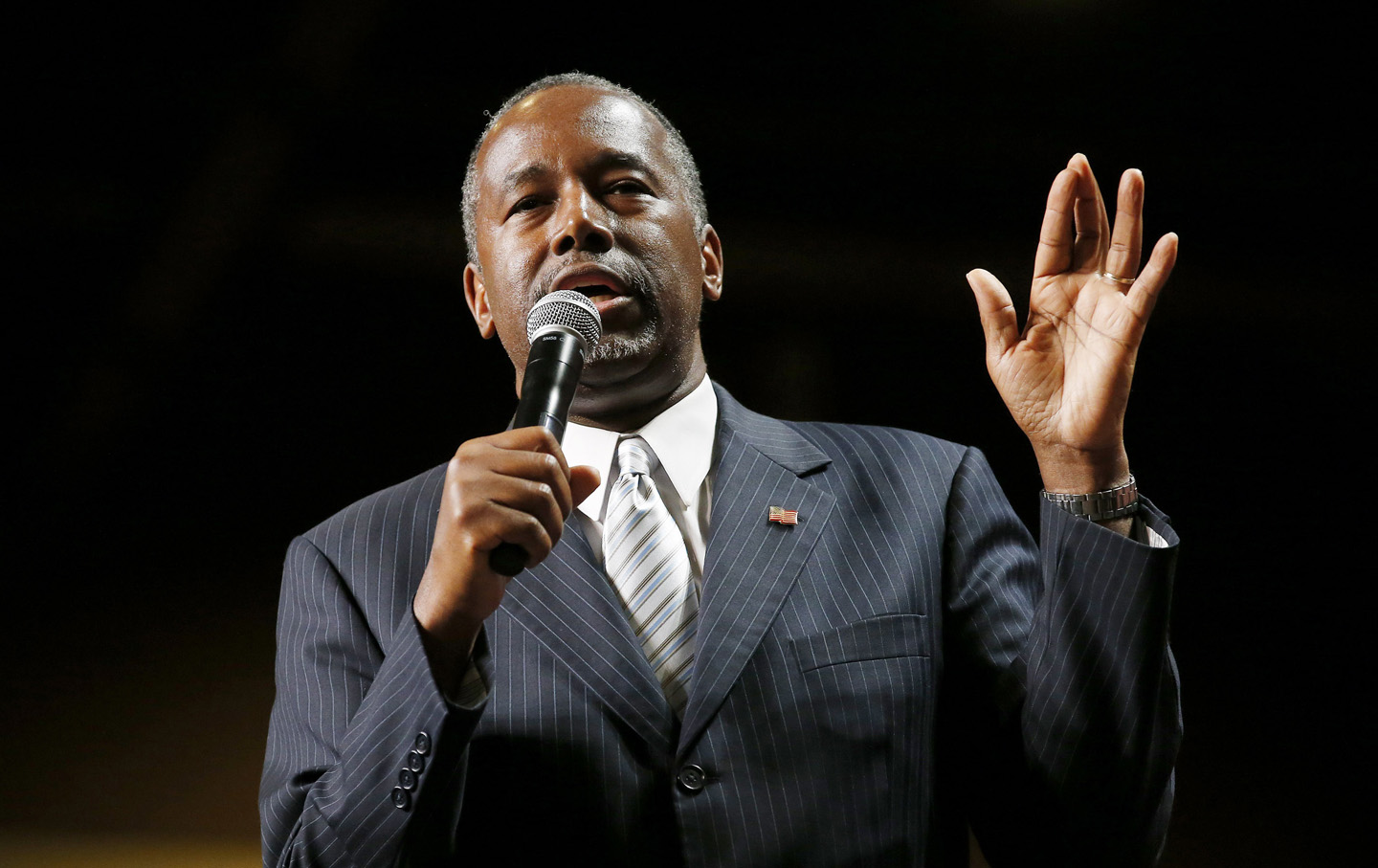 Neurosurgeon Ben Carson, rising in GOP presidential polls, is routinely described in the media as “soft-spoken” and, of course, Christian. But in his increasingly vicious response to the Roseburg, Oregon, shooting, he’s sounded neither soft-spoken nor Christian at all.

Carson, who attacked President Obama for “politicizing” the shooting at Umpqua Community College, said he changed his mind about the merits of an assault-weapons ban because he read about “tyranny.” He has also called for the arming of kindergarten teachers to prevent child massacres like the 2012 Sandy Hook killings. But he may have gone too far when he criticized victims of the Oregon mass shooting for not fighting back against their killer.

“Not only would I probably not cooperate with him, I would not just stand there and let him shoot me, I would say, ‘Hey guys, everybody attack him. He may shoot me, but he can’t get us all,’” he told Fox News.

Still, for most of this campaign, Carson had seemed like the anti-Trump, despite his hard-right views. He delivers his jibes, when he slings them, in a mild voice, almost thoughtfully. Where Trump shouts, Carson indeed speaks softly. And as Trump has moved beyond dog-whistling to using a megaphone when it comes to issues of race, crime and immigration, Carson in his very person seems to defend the GOP from charges of stoking racial polarization for political gain.

The top rival to the man who called undocumented Mexican immigrants “rapists” and “criminals,” and who defends police excess as an appropriate response to rising crime, is an African-American neurosurgeon who became an icon to African-Americans, then built his political fame on the white Christian book-and-conference circuit. How can the GOP be castigated as the party of white people (in fact, nine of 10 2012 Republican voters were white) when one of its top two contenders is black?

But the modern GOP has always been happy to showcase a few prominent black conservatives. It used to be former Secretary of State Colin Powell, who recently admitted he stays in the increasingly right-wing party “because it annoys them.”

And Carson has supplied conservative whites with validation for their blinkered ideas about black people: that disproportionate African-American poverty is simply a matter of not working hard enough, combined with Democrats’ giving them what Jeb Bush inelegantly labeled “free stuff.” Of course Carson’s stance is just as ironic as the scion of wealth and power Bush’s preaching about “earned opportunity.” The man who grew up on welfare now crusades against it, telling the hosts of The View last year:

When you rob someone of their incentive to go out there and improve themselves, you are not doing them any favors. When you take somebody and pat them on the head and say, ‘There, there, you poor little thing… Let me give you housing subsidies, let me give you free health care because you can’t do that.’ What would be much more empowering is to use our intellect and our resources to give those people a way up and out.

I shouldn’t be surprised that Carson is sharpening his edge as he rises in the polls. He made his political name with a nasty rebuke to President Obama at the National Prayer Breakfast. He then called Obamacare the “worst thing to have happened in this nation since slavery” and compared Obama to a “psychopath.” His bigoted remarks about Muslims rival Trump’s blather about Mexicans. The New York Times observed that “since starting his campaign, Mr. Carson had begun to soften his tone in hopes of appealing to a broader swath of voters,” but recently “he has veered back into more controversial territory.” Indeed.

There was at least one decent thing about Carson, politically: He once supported the assault-weapons ban. But he couldn’t maintain that position if he wanted to make a serious run at the GOP nomination. So he’s reversed himself. On guns, he’s a neurosurgeon who seems like he’s performed his own lobotomy.

On guns, Carson seems like a neurosurgeon who performed his own lobotomy.

Generally, though, his policies are to the right of Trump’s. And on Wednesday the GOP front-runner reached out and gave some support to the number-two candidate, after Carson’s comments about the Roseburg victims triggered a backlash. Trump tweeted: “Ben Carson was speaking in general terms as to what he would do if confronted with a gunman, and was not criticizing the victims. Not fair!”

It’s hard to know whether his awful Roseburg comments will hurt Carson. Improbably, a Quinnipiac poll out Wednesday morning shows him beating Hillary Clinton, Senator Bernie Sanders and Vice President Joe Biden in the key states of Ohio and Pennsylvania. Personally, I think that’s ridiculous: Once voters are paying attention, and look beyond his soothing mien to his truly radical politics, Carson won’t stand a chance against a Democrat.

As far as the GOP primary race, there’s no reason to think his cruel comments about gun victims will hurt him. Perhaps Carson has given up on being the anti-Trump, since the unlikely front-runner has shown that the base has a limitless appetite for crude and cruel remarks. But the media, at least, seem to be waking up to the fact that the man it routinely terms “soft-spoken” and Christian is actually a far-right loon. That’s a kind of progress in a political world where reporters and pundits can’t seem to take in the scary rightward drift of the GOP.