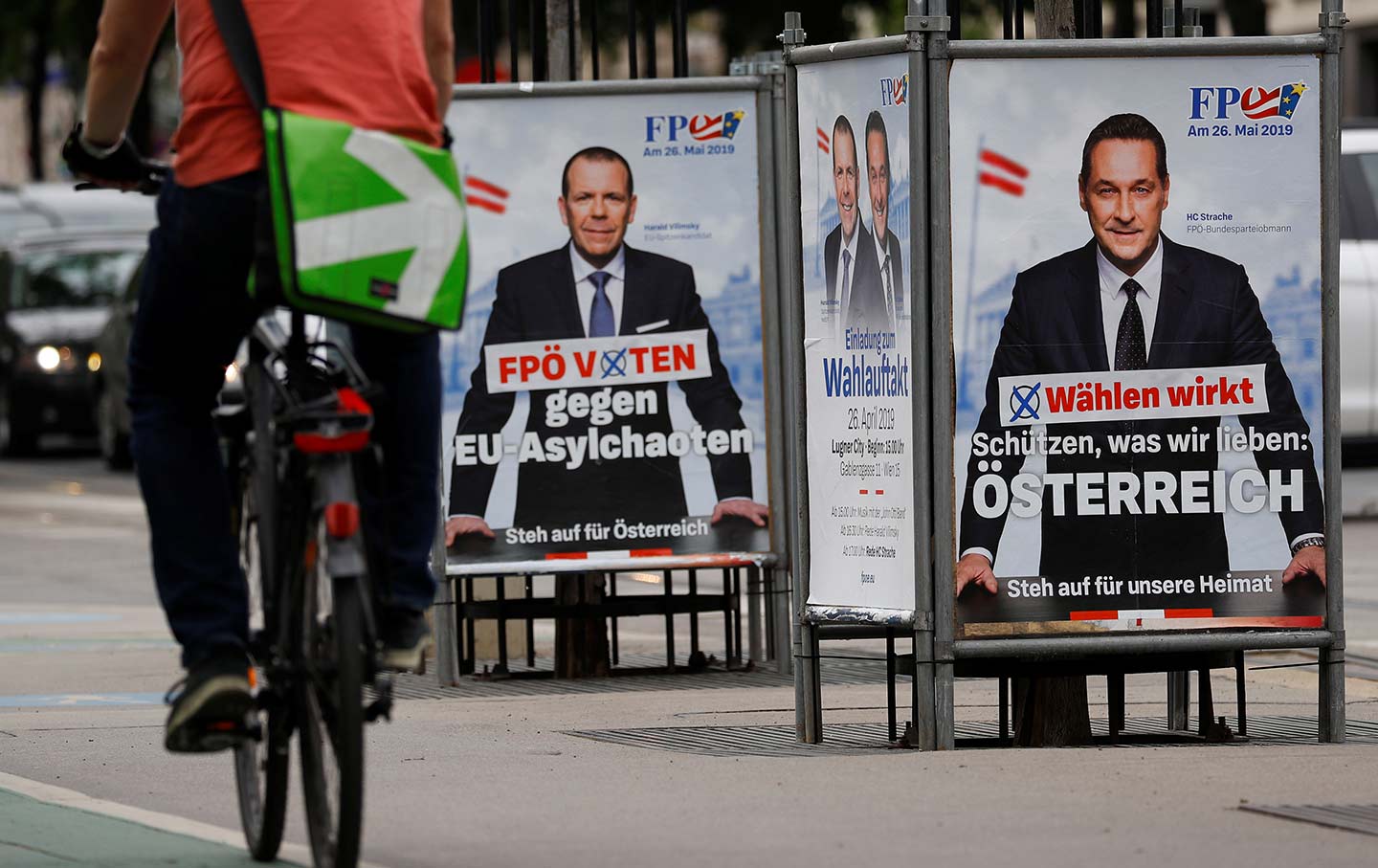 On April 23, Armin Wolf and his producers created a very powerful television moment. Wolf is the long-serving anchor of Austria’s nightly news program on the country’s public broadcaster, ORF. On the evening in question, he interviewed Harald Vilimsky, the leading candidate in this month’s European parliamentary elections for the far-right Freedom Party (FPÖ). The FPÖ, which was founded in the 1950s by ex-Nazis, has governed Austria since December 2017 as a junior partner in a coalition led by the conservative People’s Party (ÖVP).

During the interview, Wolf displayed a cartoon poster used by an FPÖ youth group and asked Vilimsky to comment on it. The poster showed a young, smiling, blond couple in traditional costume surrounded by a horde of mean-looking, sneaky little figures with big hooked noses. In the background loom a mosque and minaret. The Teutonic couple is shown in color; everyone else is in black and white. The slogan on the poster says, “Tradition beats migration.”

When Vilimsky defended the poster (“‘Tradition beats migration’—what is wrong with that?”), Wolf displayed a second illustration, this one from the Nazi magazine Der Stürmer, portraying a Jew who looks a lot like the Muslims in the FPÖ poster, and asked Vilimsky to explain the difference. At this, Vilimsky embarked on an unhinged rant about the unfairness of being compared to Nazis and threatened the internationally respected Wolf with “consequences.” It almost looked as if the lean, athletic, and visibly sweating Vilimsky was mad enough to bellow, “You can’t handle the truth!”

The dramatic moment on live television fit precisely into that space in the liberal imagination where unimpeachable reporters hold politicians to account before the public and everything feels better again. But the FPÖ’s response provided yet more evidence, adding to the woeful pile offered by the current US government, that the liberal imagination might be coming up short when faced with politicians who don’t care about the truth and whose political technique requires them to play the victim of a supposedly elitist media. 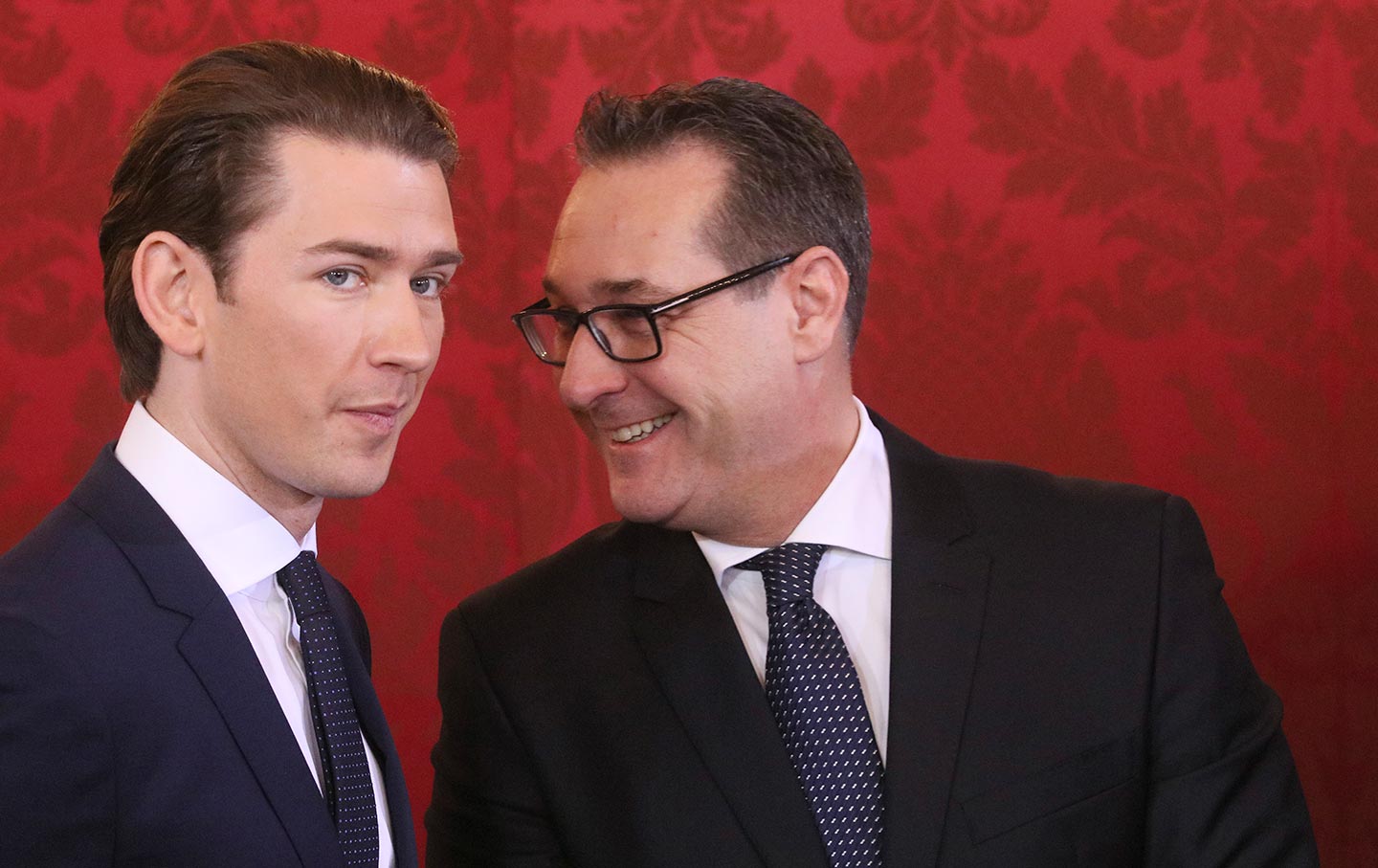 The Far Right Is Now in Power in Austria

Instead of moving on from what to a reasonable observer looked like a disastrous performance by Vilimsky, the FPÖ doubled down, with various party figures mounting a sustained attack on Wolf for confronting Vilimsky. Norbert Steger, a former FPÖ politician who is now the chair of the public broadcaster’s supervisory board, threatened Wolf with a “sabbatical.” Austria’s vice chancellor and FPÖ leader, Heinz-Christian Strache, told an interviewer that Wolf’s comparison of the two posters was “repulsive”—while defending the FPÖ cartoon because it depicted Muslims and not Jews.

The FPÖ has long had it in for Wolf, showing no compunction about using his name and image in the party’s attempts to rile up its base. In the winter of 2018, Strache posted a Facebook meme with Wolf’s photo, accusing him and the ORF of spreading lies. Wolf responded vigorously, suing the vice chancellor for defamation. (In a settlement, Wolf forced Strache to publish an apology and donate €10,000 to an organization that monitors right-wing extremism.)

Another ad, released right after the Vilimsky interview but clearly made some time before, attacks Wolf personally—although in it he’s ingeniously disguised (perhaps hoping to avoid another lawsuit) as a woman named Armina Wolf. The ad warns FPÖ voters that if they stay home, they’ll be handing Europe over to the globalist open-borders crowd, portrayed as a conspiracy supported by the Social Democrats, Greens, and Armina.

The FPÖ cultivates and feeds off this conflict with the media, which makes it hard to say who really benefited from Wolf’s masterly confrontation with Vilimsky. In fact, who’s to say that Vilimsky’s outrage during the interview wasn’t just playacting, that he wasn’t laying into that snooty Vienna journalist for the vicarious pleasure of the plebes watching at home who would love to do the same but can’t? Such an interpretation would be consistent with the fact that the party put up ads in response to the interview with a tagline that whined, “Everyone is against the FPÖ.”

The party has also launched what could be an even more dangerous attack against the public broadcaster, agitating to abolish the user fee that provides a dedicated funding stream to the ORF, which would make it subject to the politicized winds of the normal budget process. Strache claims that his goal is to make the ORF more “objective,” but the objectivity he’s envisioning means reporting as stenography, in which a journalist’s function is simply to record what is said by those who have been chosen by the people to hold power.

Besides attacking the media, the FPÖ has decided, like the neo-Nazis of Charlottesville, Virginia, and the terrorist who killed 51 people at two New Zealand mosques, to embrace wholeheartedly the notion and rhetoric of “population replacement.” Strache used the phrase this week in an interview with Austria’s largest newspaper, the tabloid Kronen Zeitung, claiming that it was nothing more than “reality.” “We don’t want to become a minority in our own homeland,” said the vice chancellor, who, although he denies ever having been a neo-Nazi, was photographed as a youth participating in paramilitary training with rightists.

Even before Strache’s interview, the “population replacement” thesis became a topic of discussion in Austria because it is promoted by the extreme-right Identitarians, part of a transnational network of young extremists who attempt to present old right-wing ideas in a new, hipper style than that of the traditional neo-Nazis. The Austrian branch of the group was discovered to have received a large donation from the New Zealand shooter and is now under investigation.

The FPÖ claimed at the time to have nothing to do with the Identitarians, which was never credible, given the discovery, by the kind of journalists Strache hates, of numerous links between these young extremists and one of the country’s governing political parties. The denial is even less credible now that the Identitarians’ main rhetorical point is being proudly trumpeted by Strache, who was then lauded by the group’s leader.

Rioting in Germany Exposes the Growing Power of the Far Right

The FPÖ’s presence in government has been enabled by the ÖVP under Austria’s 32-year-old chancellor, Sebastian Kurz. When the Identitarian scandal broke, he called its ideas “repulsive” and demanded that Strache distance the FPÖ from the group. But the value of this kind of righteous outrage has decreased each time Kurz has been forced to express it, because of the extremist behavior by and around his coalition partner. There have been many examples of such behavior, each and every one dismissed by the FPÖ as an isolated case—an excuse whose full absurdity is more apparent in the German word Einzelfall, or “single case,” which, if you’ve got this many of them, is not a concept that makes a lot of sense.

The inadequacy of the mainstream parties’ response to the FPÖ’s threat underscores the importance of independent, public-minded, nonprofit journalism like that practiced by Wolf. The tragedy of the liberal position today is that we know parties like the FPÖ will try to exploit honest reporting for their own ends, turning it into a tool for promoting their antidemocratic agenda, and yet we have no choice but to press ahead with our work.

At the height of the tumult after the Vilimsky interview, Wolf tweeted that he received countless messages of support from ordinary citizens. But he decided to single out one such message for sharing: “I would like to express my thanks. I used to grit my teeth when I had to pay my ORF fee, but your reporting in general and your interviews in particular have changed my mind. From now on I’m thinking of it as a sensible investment and not a burdensome fee. Thank you!!”

I find this message very moving, as I imagine Wolf did, too. It flatters our need, as democrats, to hope that, in spite of everything, minds can still be changed by the conscientious dissemination of useful information. It expresses our faith that if only someone could expose the truth, it would matter. Somewhere behind all the laws and institutions and norms that we are taught to believe are responsible for the maintenance of democracy, there’s the person who wrote that message to Wolf. Whether in Austria or America, we democrats are betting that there are enough of those people out there and that we can reach them. People like Vilimsky and Strache and Donald Trump are making a very different kind of bet.