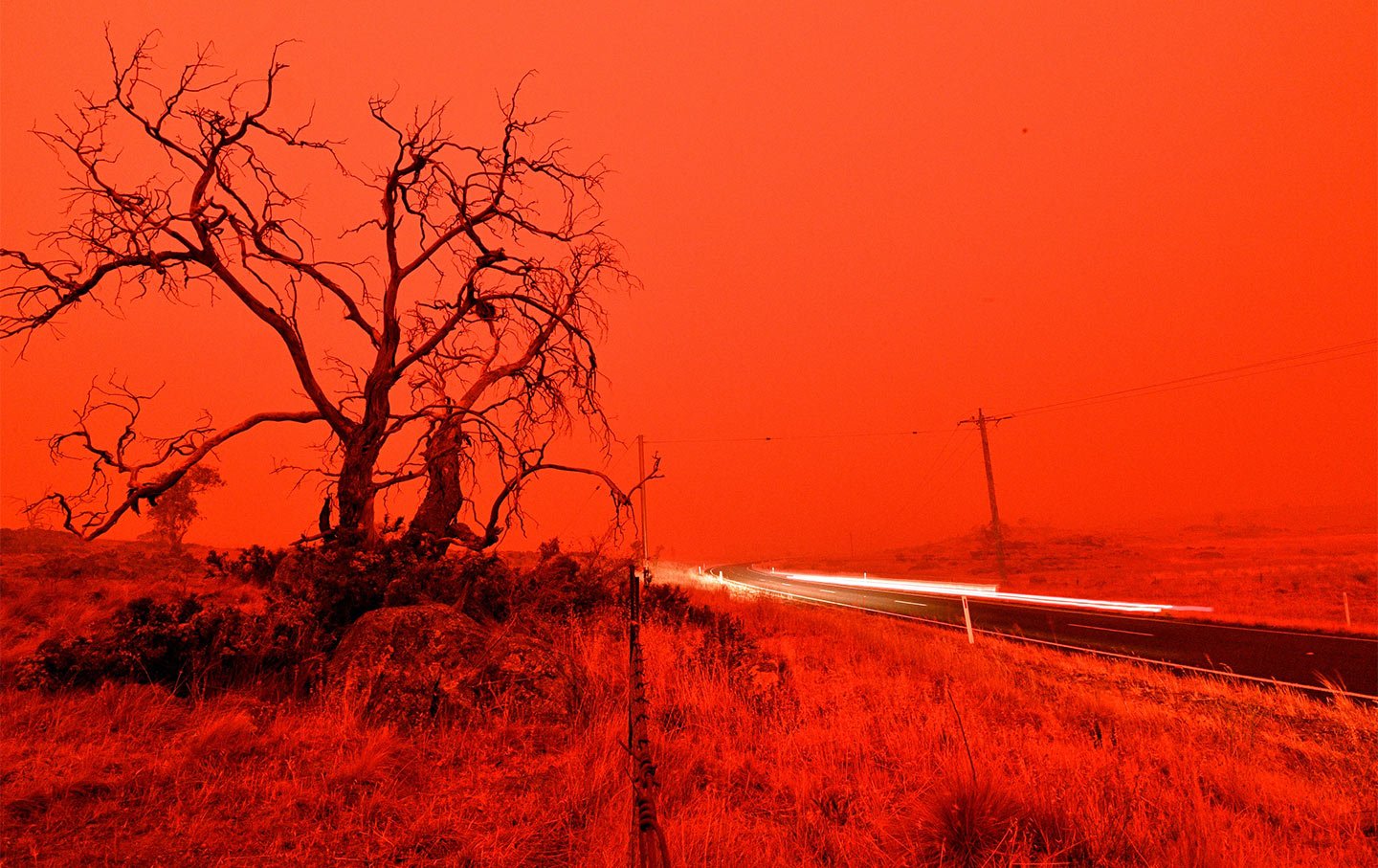 A car commutes on a road as the sky turns red from the smoke of the Snowy Valley bushfire in Australia on January 4, 2020. (Saeed Khan / AFP, Getty Images)

This piece is published in The Nation as part of Covering Climate Now, a journalistic collaboration of 400 news outlets around the world to strengthen coverage of the climate story.

One way to think about the devastating fires in Australia—and perhaps to grasp more clearly how climate change plays out across the globe—is to imagine that the southern continent was, in fact, a planet all its own.

In a small sense that’s how it actually feels, since you can’t get to Australia from much of the world without a long journey. And Australians are self-sufficient in many ways, growing plenty of food in a nation well-endowed with soil, sun, and water, though that’s becoming more difficult now because of climate change–fueled, gripping drought. Australia also has its own complement of flora and fauna found nowhere else on earth—not just koalas and kangaroos but also quolls and wombats and sugar gliders.

For a long time, its isolation served Australia well—the “lucky country,” it styled itself. It was even a little sheltered by its isolation from fears of nuclear war, as those old enough to remember the classic movie On the Beach will recall.

Trump Leaks the Blueprints for the Climate Death Star

The Making of Our Polluted Age

But now Australia is suffering, harshly, the early effects of climate change. It turns out that its unique physical features are remarkably susceptible to the global warming that’s now in its early stages. The Great Barrier Reef has been damaged by several bouts of severe bleaching from hot ocean water. The enormous kelp forests that ringed Australia’s southern coasts have been all but wiped out. And now fire has come in a way it never has before.

As the earth gets hotter, droughts grow deeper and more prolonged. We’ve seen this in California (whose climate is close enough to Australia’s that millions of highly flammable eucalyptus trees thrive in the Golden State as well), and now we see it in the Australian states of Victoria and New South Wales, where record temperatures and record aridity have set the stage for firestorms so intense that they generate their own weather. Last weekend the suburb west of Sydney was the hottest spot on earth, with the mercury near 120 degrees Fahrenheit and a relative humidity in the single digits. This is a precise recipe for an inferno, one that will be repeated across the globe in similar terrain.

Australia is also a microcosm in its economy and attitudes. Most of the early victims of climate change—low-lying Pacific islands or far northern indigenous communities—had done little, if anything, to cause the problem. But Australia is different. Its citizens vie with Canadians and Americans to emit the most carbon per capita in the world. And far more damagingly, Australia exports more coal than any nation on earth. Yet the majority of Australians have chosen not to do much about that. In their last national election, they gave power to one Scott Morrison, who made his bones as a political figure when, in 2017, he carried a lump of coal into Parliament to pass around to his mates. “Don’t be scared of it,” he said. “Don’t be afraid.”

In other words, if Australia really were a planet it would be quickly, all by itself, destroying its climate. It can’t blame the destruction on others; in any moral calculation, Australia has done this to itself. Which is not to say individual Australians themselves are to blame. As elsewhere, the fossil fuel industry has done all it can to manipulate political systems: The election that brought Morrison to power saw one coal baron spend more money on campaign ads than the country’s major political parties combined. (The same coal baron, Clive Palmer, is also building a full-size working replica of the Titanic, if you like metaphor overload). And of course, the Australian political discussion is poisoned by its native son Rupert Murdoch, who owns most of the country’s newspapers and uses them to—well, you’ve seen Fox News.

Fortunately, everyday Australians are rising up to say enough is enough. Young people are protesting at record levels, volunteer firefighters are showing immense heroism, and impacted communities are demonstrating incredible altruism in the face of disaster. Citizens in fire-ravaged towns refused to shake hands with Morrison when he, just back from a Hawaiian vacation, had the gumption to belatedly tour the ashes.

But the test of true change will be what Australia’s politicians do about the massive new fossil fuel proposals before them, such as the massive Adani coal mine (one of the biggest new coal mines on earth), the potential opening of the Great Australian Bight to offshore oil drilling, and the calls to frack enormous amounts of gas in the Northern Territory. So far, the omens are not good—Morrison has said he’s thinking instead of legislation that will make it illegal for activists to pressure banks to stop lending to fossil fuel development.

Australia is a microcosm of the world in another way too. Having savagely repressed its indigenous population, its government steadfastly ignores those people’s expertise in managing fire on the landscape. Whether that indigenous knowledge can cope with a climate that is changing as abrupt as ours remains an open question, but undertaking a real dialogue with the only people who’ve managed long-term occupation of the continent seems like a sound idea.

The idea of Australia as a planet of its own only goes so far, of course—even if it stopped exporting coal tomorrow and resolved to power its own economy with abundant wind and sun, Australia’s temperature would continue to rise. The country cannot, by itself, solve global warming. But if the shock of these hideous firestorms is what’s required to decisively change Australia’s politics, technology, and relations with the continent’s original inhabitants, that example would demonstrate to the rest of the world that real change is not impossible. Imagine an Australia that stopped building new coal mines and started installing more giant solar farms and batteries; imagine an Australia where people retreated enough to give the natural world the margin it clearly requires.

What we’re going to see, over the next year or two, is whether modern societies are capable of responding to this kind of horror with the speed and courage that science demands. Planet Australia may be the best experiment we ever get.