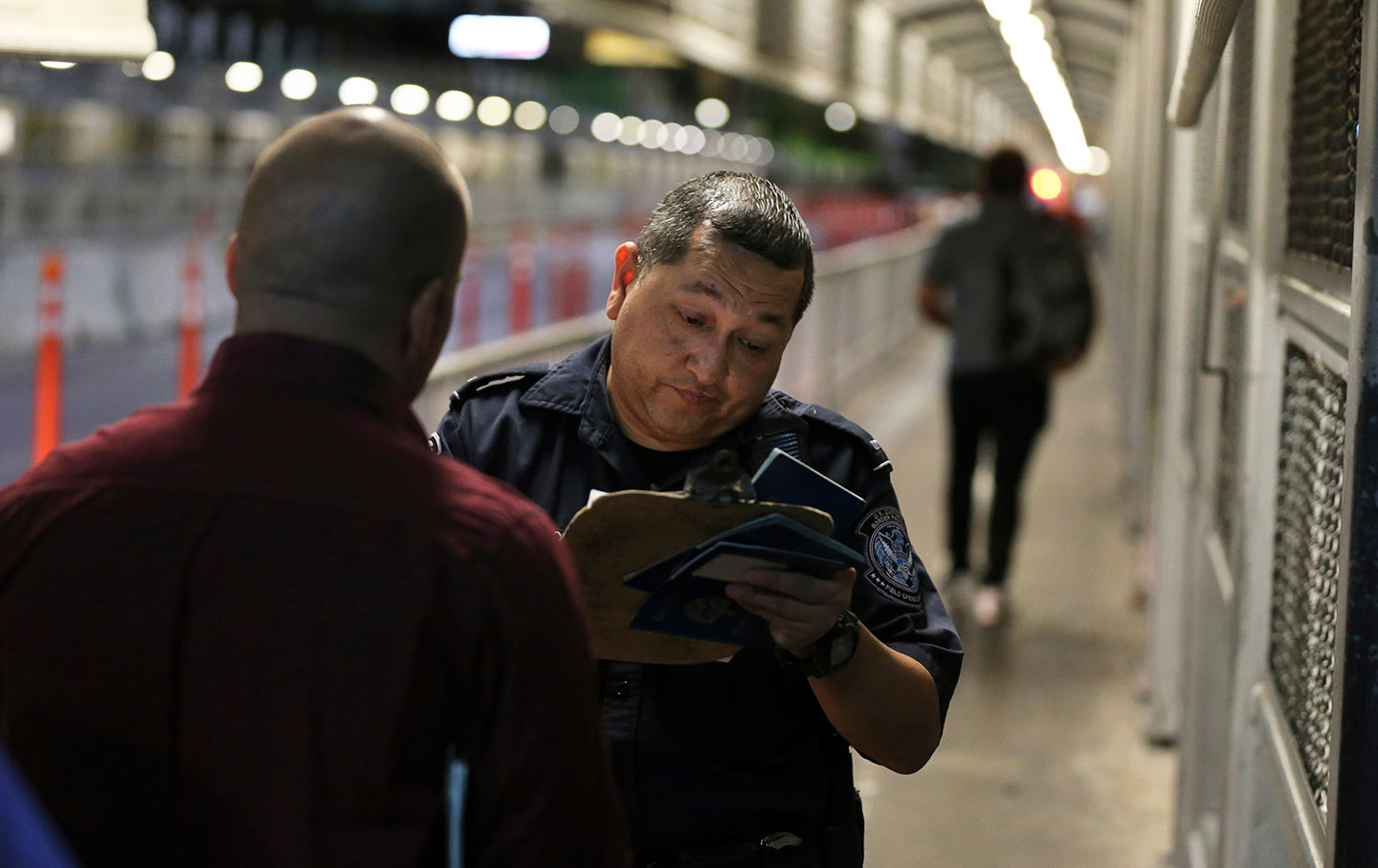 A US Customs and Border Protection officer checks the documents of asylum seekers as they depart Nuevo Laredo, Mexico, on September 17, 2019. Asylum applicants may soon be charged a fee. (AP Photo / Fernando Llano)

Later this week, Congress will hold its first public hearings in the impeachment inquiry into Donald Trump. So, what better time for the White House—masters of flimflam and distraction—to announce yet another raft of measures intended to make life harder for those hoping for a new start in the United States?

A change announced Friday, and to be published in the Federal Register on Thursday, heralds the introduction of fees that asylum seekers will now have to pay to submit their applications.  If the proposal passes review, it will cost $50 to apply for asylum—the first time a fee has ever been charged for this—and $490 for asylum-seekers to apply for a work permit.

With the US Supreme Court about to hear arguments that will decide the future of DACA, the administration also announced a huge fee increase for DACA recipients seeking a renewal of their status: The fee will go from the current rate of $495 to $765. And citizenship applications will rise from $725 to $1,170—an increase of more than 60 percent.

The administration is justifying this as a way to cover a shortfall in USCIS operating costs. Don’t believe that for a New York minute: This is all about making it increasingly difficult for poor, nonwhite immigrants to access the American Dream.

The change to the asylum process is particularly unconscionable. The only other countries on earth to impose such fees are Australia, Fiji, and Iran—and even their fees are lower than what’s now being proposed for the United States.

But, of course, being in a tiny global minority is par for the course for this rogue regime; after all, by formally starting the withdrawal process from the Paris climate agreement on November 4, the United States set itself on a path to becoming the only country in the world to withdraw from this landmark accord.

That’s the bad Signal. On the good-news front, San Franciscans elected an extraordinarily progressive district attorney, Chesa Boudin, who’s committed to a complete overhaul of the criminal justice system. Boudin’s parents were both members of the Weather Underground and have spent considerable time behind bars. (His father is still incarcerated.) Boudin himself is a former public defender who opposes mass incarceration policies, has pledged to end gang sentencing enhancements, and wants to divert more nonviolent offenders away from jails and prisons and into mental health treatment and other support services.

Not only that, but Education Secretary Betsy DeVos—facing growing criticism over her cozy relationship to the student loan industry—announced that debt accrued by students at the now-defunct Illinois Institute of Art and Colorado Art Institute will be written off. Roughly 1,500 people will have their loans forgiven as a result of this move.

And the Noise? Attorney General William Barr’s work to release a report purportedly showing how a global anti-Trump conspiracy functioned in 2016. Trumpists’ dog-and-pony-show attacks on the whistle-blower who blew open the Ukraine quid pro quo scandal. And, last but not least, the foul gurgling sound of Senate Judiciary Committee chair Lindsey Graham’s obliterated credibility swooshing down the drain, as he says he won’t read transcripts of witness testimony from the impeachment hearings because, he claims, it’s all “a bunch of B.S.”