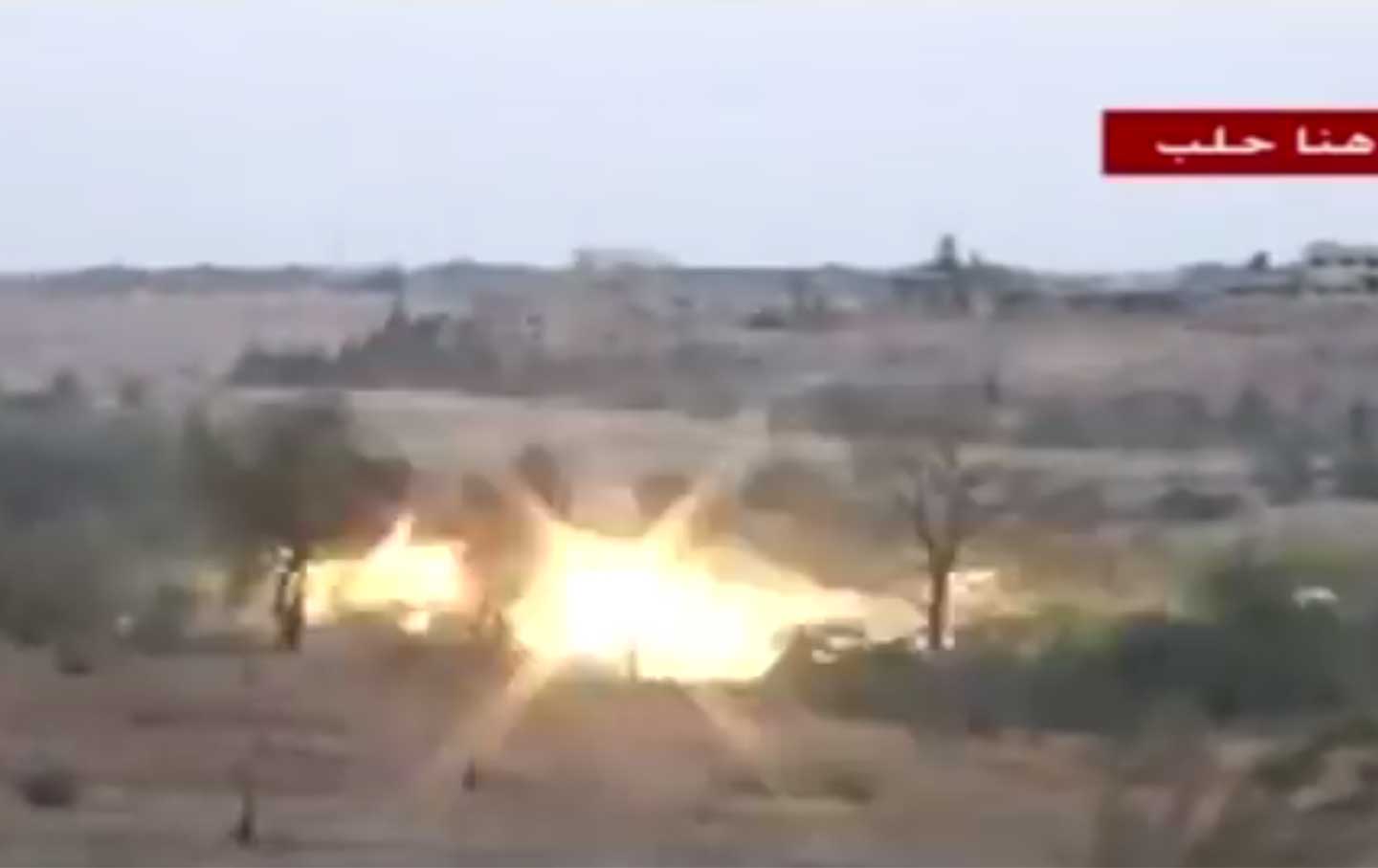 Istanbul— Aleppo is under siege again. Once again, some 300,000 civilians in the rebel-held eastern part of the city must eke out their survival with no fresh produce and a dwindling food supply, in addition to the other perils of life for those in the Assad regime’s political opposition.

That means barrel bombs that destroy houses and bury their children, and missiles that destroy their schools, mosques, and hospitals.

The siege crept up almost without notice over the past 10 days, as the regime closed the Alramousa road, the sole supply route into the old town, first by intense bombing and then by targeted missile attacks just weeks after a surprise rebel offensive had opened it.

State television on August 27 showed a missile attack against vehicles traversing the road that it said were carrying “mercenaries and armed elements.” Two days later, rebel media activists reached the scene, where they found the body of driver Abdo Rawas splayed out on the road, alongside his destroyed truck and its cargo of fruits and vegetables. The activists couldn’t find the body of Adnan, Rawas’s 12-year-old son, who was driving with him. They fear he was incinerated in the attack, leaving no remains.

WARNING: GRAPHIC VIDEO. The body of ﻿ truck driver Abdo Rawas, who was killed in a missile attack on the Alramousa road.

The siege of Aleppo, like any siege, will come to an end at some point, but the question is on what terms. If the other sieges against other rebel-held towns in Syria are any guide, the terms will be take it or leave it: Surrender or starve.

Take Darayya, a Damascus suburb where a four-year regime siege ended just one week ago. Regime forces had destroyed or damaged practically every building in the town, seized the inhabitants’ farmland, burned their crops, and bombed their sole hospital.

In Darayya, townspeople were out of food, water, ammunition, and medical care when they agreed to leave their homes.

Townspeople were out of food, water, ammunition, and medical care when they agreed to leave their homes with no expectation of returning. More than 5,000 were deported to Idlib province, which is under rebel control, or to camps for the internally displaced in regime-held territory near the Syrian capital.

In Moadamiya, which abuts Darayya, a regime military officer, accompanied by Russian officials, told town representatives on Wednesday that defenders would have to give up their weapons and be sent to Idlib, but anyone who was willing to submit to regime control could stay.

Col. Ghassan Bilal said now that the regime had separated Moadamiya from Darayya, “There will be no more meetings.” If locals did not accept the deal, the opposition Smart news agency reported, he threatened to set the city on fire. A town spokesman said 45,000 are trapped there, along with possibly 2,800 rebel fighters.

The evacuation began Friday, with hundreds of civilians piling into buses to be evacuated to regime shelters. The monitoring group Physicians for Human Rights called the evacuation a war crime. “Nothing about this evacuation is voluntary, and nothing about this evacuation is legal,” said Widney Brown, the PHR programs director. “Under international law, both forced evacuations and besiegement, in which Moadamiya’s thousands of civilians are being deprived of vital food and medicine, are war crimes and crimes against humanity.”

In Al Waer, the regime fired napalm-like incendiaries, which produce orange flumes that intensify when doused with water.

Al Waer, a neighborhood in Homs where there are 80,000 civilians according to the Syrian opposition, has been under heavy attack since March, first from snipers, then mortars, artillery, missiles and air assault, local medical personnel reported. The regime tried out a new weapon on public locations as well as private dwellings, dubbed a cylinder missile, which consists of 300–400 kilograms of TNT. Launched from nearby areas, it can destroy a four-story building.

Starting August 23, the regime started firing napalm-like incendiary weapons at the town, which produce orange flumes that only intensify when doused with water. The targets included a shelter for the displaced, a school, the medical center, and the local hospital. An agreement has apparently been reached in Al Waer as well.

“I failed them, and it is really sad to think of what they went through over these years.” —Jan Egeland, UN official

What the Assad regime chalks up as a morale-boosting success is simultaneously a signal failure for the US-led Friends of Syria Group, the international coalition that has provided pro-Western rebels with just enough arms and support to survive; as well as for the United Nations, which has been ordered by the Security Council to deliver food and medical supplies to the people under siege.

A siege, he told reporters, “is not broken by the population giving up after starvation and after bombing. A siege is lifted by humanitarian access and freedom of movement, in and out, by the civilian population.”

The evacuation of Darayya was also an abject setback for the world’s governments, which are party to the 1949 Geneva Conventions and other instruments of international humanitarian law. A fundamental principle of the convention is that civilians are not to be made the object of attack in war, a lesson incorporated from the Holocaust and World War II.

Aleppo first came under siege around July 10, when the Assad regime, with Russian air support along with Iranian-led Hezbollah and other militias, cut the Castello road. At the time, it was the only secure route into eastern Aleppo, and they stopped the traffic by destroying at least 20 vehicles and their occupants as they tried to enter or leave the city. Amid Syrian-regime barrel bombing of civilian districts, along with Russian aircraft targeting at least six health facilities, Russia proposed setting up evacuation corridors so that residents could flee the city safely, a move that other UN Security Council members rejected.

On August 6, 27 days into the siege, rebel forces attacking from southern Aleppo linked with rebels based south of the city and freed the Alramousa road, which leads to eastern Aleppo. After several days of fighting, commercial traffic, ambulances, and private cars began to traverse the narrow road, marking a temporary end to the siege.

Within 10 days, regime aircraft began targeting the Alramousa road, and doctors based in eastern Aleppo reported that Russian jets were “hunting” the cars of civilians trying to flee the city.

By August 20, the road was impassable, rebel media activists said, and by August 27, regime forces, trying to regain lost territory, set up mortar positions on the hills above the road, giving them complete control over it.

“The regime and its allies were destroying everything on the road, even though they knew they were carrying civilians…”

It is now “a death road, like the Castello road,” Dr. Abdo Mohammadain told The Nation in a WhatsApp message Thursday from inside Aleppo. He said he had tried to drive the road twice, around August 24, first by ambulance and then by private car. “It was raining mortars, some landing just 20 meters from us, and we had to turn back because the driver didn’t think we would make it,” he said of the first attempt that morning.

On the second attempt, he said, aircraft were attacking cars, which were crashing and burning, causing accidents and blocking passage. “The regime and its allies were destroying everything on the road, even though they knew they were carrying civilians or transporting food or fuel for electric generators,” he said.

Stunning as these setbacks are, they receive little notice from the Obama administration, which is still hoping to convince Russia to observe a cease-fire and impose one on its Syrian ally. Not only has the president failed to comment, but US efforts to end the fighting, with a diplomatic drive that features carrots but no sticks, seem to be going nowhere.

Even as Russian aircraft destroyed a half-dozen medical facilities in Aleppo and other parts of northern Syria last month, the administration refused to pin responsibility on its negotiating partner. Human Rights Watch produced careful documentation in late July of Russia’s use of cluster bombs against Syrian civilians earlier that month, but the US government refused to confirm the data.

The worst terror in Syria is not from the Islamic State but from state-sponsored attacks on civilians, backed by Russia.

Far from taking the lead in organizing protection for civilians in Syria or allowing defenders to acquire arms so they can protect themselves, the administration strategy appears to be focused on reaching a deal with Russia on jointly bombing terrorist targets in Syria, a deal that would be accompanied by a national cease-fire. The problem with the strategy is in the different definitions of terrorists used by Moscow and Washington. It’s hard to see how they can reach an accord.

The worst terror in Syria is not from Islamic State extremists or the Al Qaeda affiliate, Jabhat al-Nusra (which recently split from Al Qaeda and changed its name to Jabhat Fateh al-Sham), but from state-sponsored attacks on civilians, backed by Russia. The Syrian Network for Human Rights, a nonprofit often cited by the US government, estimated Thursday that regime bombing has driven 7 million people to seek refuge abroad and displaced 6.3 million within Syria.

The US government, once the world’s leading champion of humanitarian law, is not completely silent but has been reduced to pro forma statements. “The United States deplores the regime’s attempt to besiege Aleppo city and demands that full access to the city be maintained,” said Michael Ratney, the US Special Envoy for Syria.

Another official said Washington is focused on “ending the civil war by finding a political solution that advances a transitional government structure.” But he added that this can’t advance “until we get a meaningful cessation of hostilities applied nationwide, so we can get better humanitarian access to more Syrians in desperate need.” And this requires lifting the siege of Aleppo. “That’s why the secretary’s focus has been on these negotiations,” the official said, referring to Secretary of State John Kerry’s thus-far fruitless talks with Russian Foreign Minister Sergey Lavrov. The words will comfort no one in besieged Aleppo.

Editor’s note: This article has been updated to reflect the news that  the evacuation of Moadamiya began on Friday.