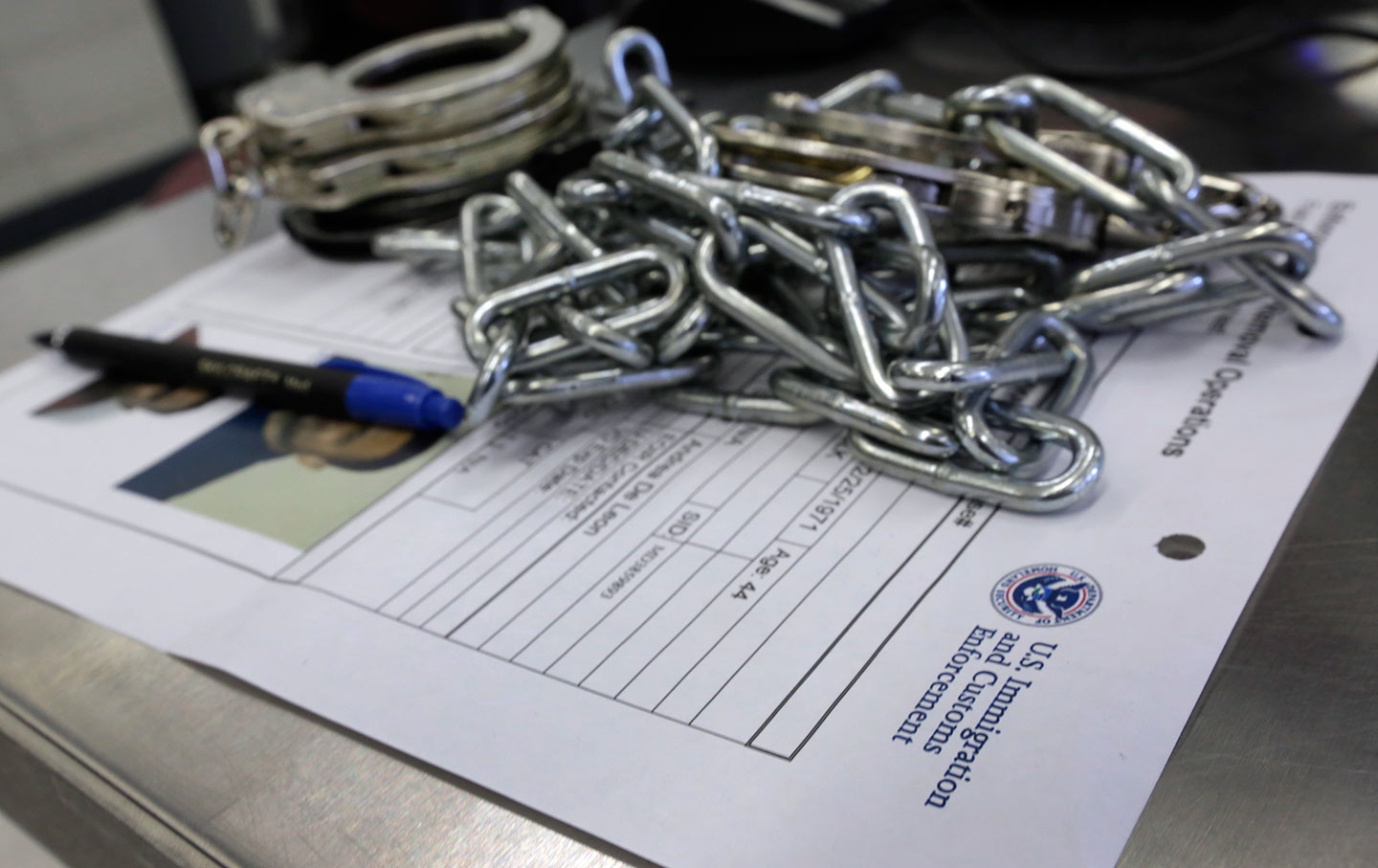 Handcuffs and chains sit on the paperwork of a person arrested by Immigration and Customs Enforcement officers. (AP Photo / Richard Drew)

When US Customs and Immigration asked Maxine Bayley’s client to send over extra evidence for a green card application in 2018, the Duane Morris LLC immigration attorney sent them the files express.

FedEx confirmed they’d arrived—but the government said it didn’t have them.

Amira Mikhail, an attorney with the International Refugee Assistance Project, had a similar problem with a client who had the bad luck of having a dash in her mailing address.

Because USCIS’s internal system couldn’t process the dashes, the agency misprinted its response. The letters bounced, putting her case in jeopardy until Mikhail intervened.

Lost files, poor communication, faulty technology, and seemingly endless delays: federal audits show that Mikhail and Bayley’s experiences weren’t unusual for the agency, which spends $300 million per year on paper and has disastrously mismanaged a 13-year effort to go digital—often leaving immigrants to deal with the consequences.

And what used to be a time-sucking, stress-inducing inconvenience is now a question of visa denials and possible deportation: a new USCIS policy automatically initiates removal proceedings for many whose applications are denied, which means minor errors—even the agency’s—can have serious consequences. That’s especially threatening for immigrants who lack legal representation and language skills, or who just don’t know how to navigate a convoluted immigration system that runs on hefty application fees.

Mikhail, as counsel, was automatically notified and managed to communicate with USCIS to fix the error. “Imagine a scenario in which the petitioner is not represented by an attorney,” she said. “They’d never get the notice, and they’d get blamed for not responding, or deal with the consequences of not responding: a closed case.”

Even for Bayley’s client, who had a work visa and an attorney, it was an expensive and painful mistake. It was the second time in a row that USCIS had lost track of Bayley’s client’s files. The first time, USCIS notified Bayley, and she couriered more copies down. The second time, it didn’t—forcing the client to open a new case, pay a second round of steep fees, and spend years longer waiting.

“Instead of notifying him,” Bayley said, “they closed his case. And the basis for that denial was that they didn’t receive this document.”

Bayley’s client already had a work visa, safeguarding him from deportation. But immigrants without a safe underlying status—like those whose Deferred Action for Childhood Arrivals (DACA) status expires—don’t have that protection. “You could get deported,” Bayley said. “Something like that could have really serious consequences.”

At best, Bayley explained, “you go through that process again, through the immigration courts, which can take years. You pay attorneys’ fees. You pay filing fees. You pay everything again.”

Who’s to blame for this dysfunction? Government audits point to “management weaknesses” at the agency. Some attorneys, like Bayley, believe USCIS leadership is competent but “overwhelmed” by the scale of the task.

But Michael Jarecki, former chair of the American Immigration Lawyers Association’s Chicago chapter, isn’t sure the agency wants things faster or simpler–especially under a government that doesn’t hide its hostility to immigrants. “Part of my cynical response, knowing what we’re going through now in the last year and a half, would be an invisible wall type of thing,” Jarecki said, “where the agency wants to slow things down, and actually is happy to slow things down.”

For the Trump administration, subtle policy tweaks have been more valuable (and easier to pull off) in deterring immigrants than walls, especially because they fly under the radar. By finding new grounds for deportations—and ordering them under increasingly questionable circumstances, the White House steadily achieving much of what a border wall is meant to do. The potential for harm is compounded by USCIS’s paper system, which the general public isn’t widely aware of, and its messy digital trials.

Trump didn’t start this, though: the agency has been struggling since the Bush years. In 2005, dealing with an “outdated” and “inefficient” all-paper system, USCIS drew up a $500 million, four-year plan to revamp operations and go digital.

A 2016 report from the federal Office of the Inspector General called Transformation a “deeply troubled program which has, over its life, wasted hundreds of millions of dollars.” At the same time, the project has added hundreds of staff: starting at 20 in 2007, it had 98 by 2011. Now it’s almost 400, including contractors.

“USCIS is still in the stone ages,” said Jarecki, describing its “extremely clunky” procedures. “Everything we prepare is paper-based. If there is an electronic copy of something, like a marriage visa, they don’t have the capacity to review that. We are way behind.”

If USCIS did digitize, attorneys and other experts agreed, there wouldn’t be so many errors in the first place—on either side. Visa petitions are exhaustive, ultra-detailed applications, often running 100-plus pages; minor mistakes are common, even for experienced attorneys and officials. Other federal agencies’ web forms, like the IRS’s E-File and HealthCare.gov, can catch blanks, simple errors, or missing files.

“Technology could be a very clear fix to a lot of these problems,” Jarecki said, pointing out that some State Department posts accept similar applications as PDFs. A 2015 GAO report makes the same case, writing that “each delay means that more time will pass until USCIS is fully prepared to provide better service to those applying for immigration.”

“I don’t think that there’s any excuse,” Mikhail said. “I’m sure there are plenty of reasons why it was delayed, but I think moving into the digital age well after it’s developed is incredibly slow and kind of unacceptable.”

Even so, little about USCIS’s digitization efforts so far inspires confidence.

In 2006, the agency said it would have a digital pilot in place by 2007. In late 2008, it signed a $500 million contract with IBM, saying it would digitize fully in five years. By 2011, though, USCIS was running $300 million over budget, with two years lost to delays and a new expected cost of over $2 billion. It ditched IBM, saying the company provided “deficient” code. USCIS then scrapped the system IBM delivered, contracted with at least nine firms to replace it, and promised a new approach to software development.

But a harsh 2016 letter from the Inspector General still found that “after 11 years and considerable expense… little progress had been made.” The same letter accused USCIS of “continued effort to promote disagreement for its own sake rather than collaboration,” tearing into the agency for its digitization “struggles,” an uncooperative attitude during audits, and poor explanations for the delays. (IBM did not respond to a request for comment on its work with USCIS.)

USCIS started putting a few of the roughly 90 forms it processes online under a new post-IBM system in 2016. But those early rollouts went badly, and a 2017 audit called the effort “unsuccessful.” The agency posted record-low naturalization numbers in the months after trying to go digital, with worse backlogs than ever. And as Jarecki points out, applicants still need mountains of paper.

Jarecki said he had had USCIS officers tell him their digital systems were down on multiple occasions, delaying cases. He said he’d also received automated updates on cases that were closed as much as a year prior. Government reports list similar errors, like successful applicants getting wrongly notified that their applications weren’t approved, or that more evidence was needed.

When those errors aren’t caught, they can cost immigrants—like Bayley’s client—their case.

For refugees and asylum-seekers, delays can be life-threatening. For others, not getting a visa promptly—or not getting your green card in the mail—can trigger deportation proceedings. And for families struggling to get by on one parent’s income, bureaucratic screwups are especially painful, adding years to the wait and thousands to the expense of legal immigration. “It just prolongs separation for families,” Mikhail said of delays at USCIS. Family visas are typically granted to spouses, children, and parents, and Mikhail says it’s often “very hard for those people to be separated.”

Delays aren’t all: now USCIS is struggling more than ever to keep track of immigrants’ files.

In November 2016, months after the digital rollout, over 200,000 lawful permanent residents complained that green cards they should have received were missing—part of a host of problems the agency says it still faces.

That audit also found that more than 5,000 green cards were sent out with incorrect information, including 300 with the wrong photo. Immigration officers were falsely told that applicants hadn’t showed up for interviews, endangering their cases. Officers reported that tech support was unhelpful or unavailable, and complained that “the constant need to check for processing problems, diagnose issues, and locate stuck cases was overwhelming.” Processing times “nearly doubled.”

And two years ago, 15,000 applications bypassed an FBI “name check” thanks to a massive find-and-replace error that deleted the letters NO, NM, and NA anywhere they appeared.

The name John Adams, in OIG’s example, showed up as “Joh Dams”—with no match in the FBI’s database.