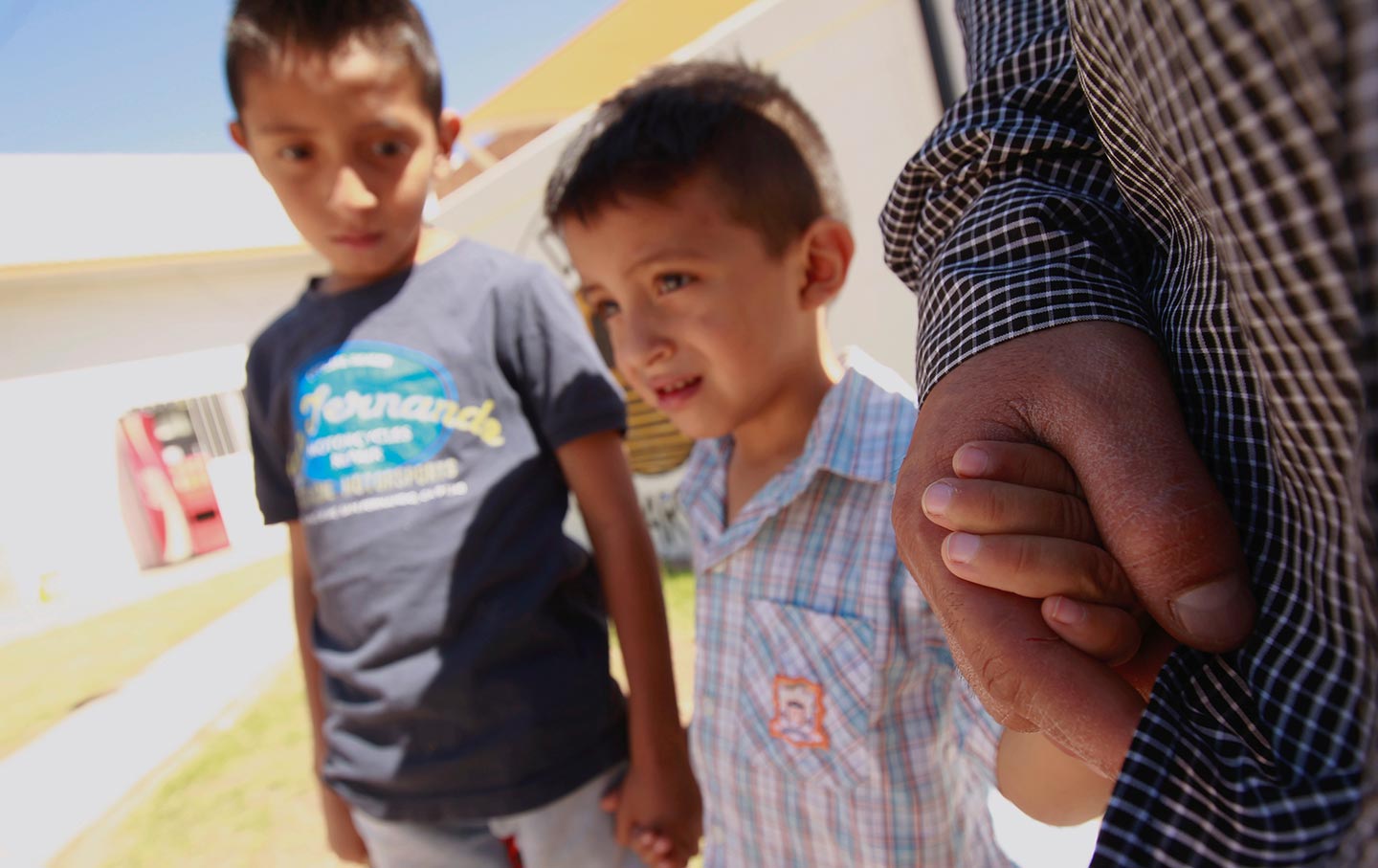 A Salvadoran migrant and his sons outside a shelter in Ciudad Juarez, Mexico, in June 2018. (Reuters / Jose Luis Gonzalez)

When Daniela sets out to find someone, often all she has is a name and a phone number. Sometimes the phone number is disconnected, or it belongs to the wrong person. If she does reach the right person, they might speak not Spanish but an indigenous language. They might have trouble scheduling a longer call because their work schedule is erratic, or because they are traumatized, or in hiding.

Daniela, who asked that I use a pseudonym because of the security risks involved in her work, is a human-rights lawyer in Guatemala City. For the past several years she’s worked with the Justice in Motion defender network, a group of roughly 40 lawyers in Mexico and Central America who handle legal matters for cases involving transnational migration—collecting evidence for asylum claims, for instance, or obtaining declarations from deported workers regarding labor violations in the United States.

‘What Happened to My Daughter? Who Had Her?’

Recently, she has also been searching for parents who were separated from their children after crossing the US-Mexico border under the Trump administration’s “zero-tolerance” policy. While court-ordered deadlines for reuniting these families have come and gone, about 650 children remain apart from their parents because the government considers their families “ineligible” for reunification. These families fall into various categories: Some parents’ background checks raised a “red flag”; others waived their right to reunification, though attorneys have submitted testimony indicating that many did so under pressure and without fully understanding the forms they were signing; some the government released in the United States and lost track of. About 468 others were deported, reportedly without being asked whether they wanted to leave their kids behind. The administration currently has no plan to reconnect them.

“There is no effort being made by the government to fix this situation,” said Ashley Huebner, the associate director of legal services for the National Immigrant Justice Center, which represents migrant children in shelters in the Chicago area. “Each day it just becomes more obvious how their role has been abdicated.”

The difficult work of finding these parents has instead been left to advocacy organizations, faith-based groups, relatives, and lawyers, who’ve rapidly formed an ad hoc network spanning the United States and Central America. Each family’s case is unique, but a common challenge is lack of information. Investigators sometimes have only a name and a disconnected cell-phone number or a vague description of a remote village to work from.

In Guatemala, although the government tracks the names of returned migrants and their date of arrival, it has no record of where they go once they’re back in the county. “The government of Guatemala is not doing anything to help reunite parents and children,” said Daniela. She relies on information provided by lawyers in the United States and tips from contacts at airports or in migrant shelters in her country. The people she’s searching for are spread all over, mostly hundreds of kilometers away from Guatemala City. They’re in varying degrees of crisis, living in extreme poverty or emotionally wrecked from having their children taken from them.

So far Daniela has reached six parents who were separated from their children in the United States, including the father of a 7-year-old girl who has been able to speak to his daughter only once since she was taken from him. Another father that she’s spoken to, who speaks an indigenous language and almost no Spanish, was separated from his 6-year-old son for more than a month, and eventually signed paperwork that he couldn’t read because he was told it was the only way to be reunited with his child. Father and son were deported together the next day.

“What they have told us so far is that they want their child. They did not want to be deported without their children.”—Efrén Olivares of the Texas Civil Rights Project

Efrén Olivares of the Texas Civil Rights Project, which represents hundreds of separated families, told reporters last week that his organization has identified seven clients who’ve been deported without their children, though he suspects the real number is higher. “We are being as creative as we can” in trying to find others, Olivares said. The effort includes contacting relatives and working with human-rights ombudsman in Northern Triangle countries; TCRP has also been in touch with foreign human-rights groups and consulates. All of the deported parents identified by TCRP so far are fathers of children ranging in age from 6 to 17; four are from Guatemala, and three from Honduras. Olivares said that TCRP has only been able to contact three of the men. “What they have told us so far is that they want their child,” Olivares said. “They did not want to be deported without their children.”

Some parents are particularly hard to contact because of the security risks they face in their home countries. In Chicago, the National Immigrant Justice Center is representing one 4-year-old boy whose father was deported to Honduras in June, and is now in hiding there. The father left Honduras because of repeated threats from a narco-trafficker who’d been involved in the murder of his cousin. He sought asylum at the port of entry in Brownsville, Texas, but according to a legal declaration, he was never given a credible-fear interview, as is required by law. Instead, his son was taken from him and sent to a shelter in Illinois, while the father was held in Texas and then deported. “Two or three days after I got to Honduras, I spoke with my son by telephone. I had called so many different places to try to find him,” the father said in his declaration. “Finally, when I spoke with him, he said [he] didn’t want to talk to me because he said I had left him there.”

Finding that father and taking his declaration involved a researcher from Human Rights Watch, a Honduran lawyer, a local fixer, and a motorcycle ride across dangerous roads. And locating parents like him is just a first step. Next come questions about how reunification itself will happen. The ACLU, which is leading a class-action lawsuit over the family separations, has asked the judge to set a seven-day deadline for sending children back to their home countries if that’s what their parents want. But attorneys are also asking that parents who were pressured into signing deportation waivers, or who were denied a chance to present their asylum case, be allowed to return to the United States to pursue their cases. Some parents may ultimately want their children to remain in the country to pursue independent asylum cases, but those adults need to be located regardless, to confirm the decision and provide evidence to support their child’s case.

Last week the judge overseeing the ACLU’s case ordered the government to hand over a list of names of all the families considered ineligible for reunification. (The government said Friday that it has done so.) That will make the search for deported parents a bit easier—still, the burden of locating those 400-plus people and making sure that reunification happens will be almost entirely borne by civil-society groups, many of whom have limited staff and funding.

“It should not be civil society’s job to find people who the government separated from their children and then sent home.”—Nan Schivone of Justice in Motion

“It’s shocking to me that we’re even in this situation—that civil society has to mount this response,” said Nan Schivone, the legal director of Justice In Motion. Her nonprofit organization is small, with eight attorneys working on the separation issue in the Northern Triangle. They happen to be well-positioned to help find deported parents, but that’s not the work they were initially tasked with, and funded for. “It should not be civil society’s job to find people who the government separated from their children and then sent home,” Schivone said.