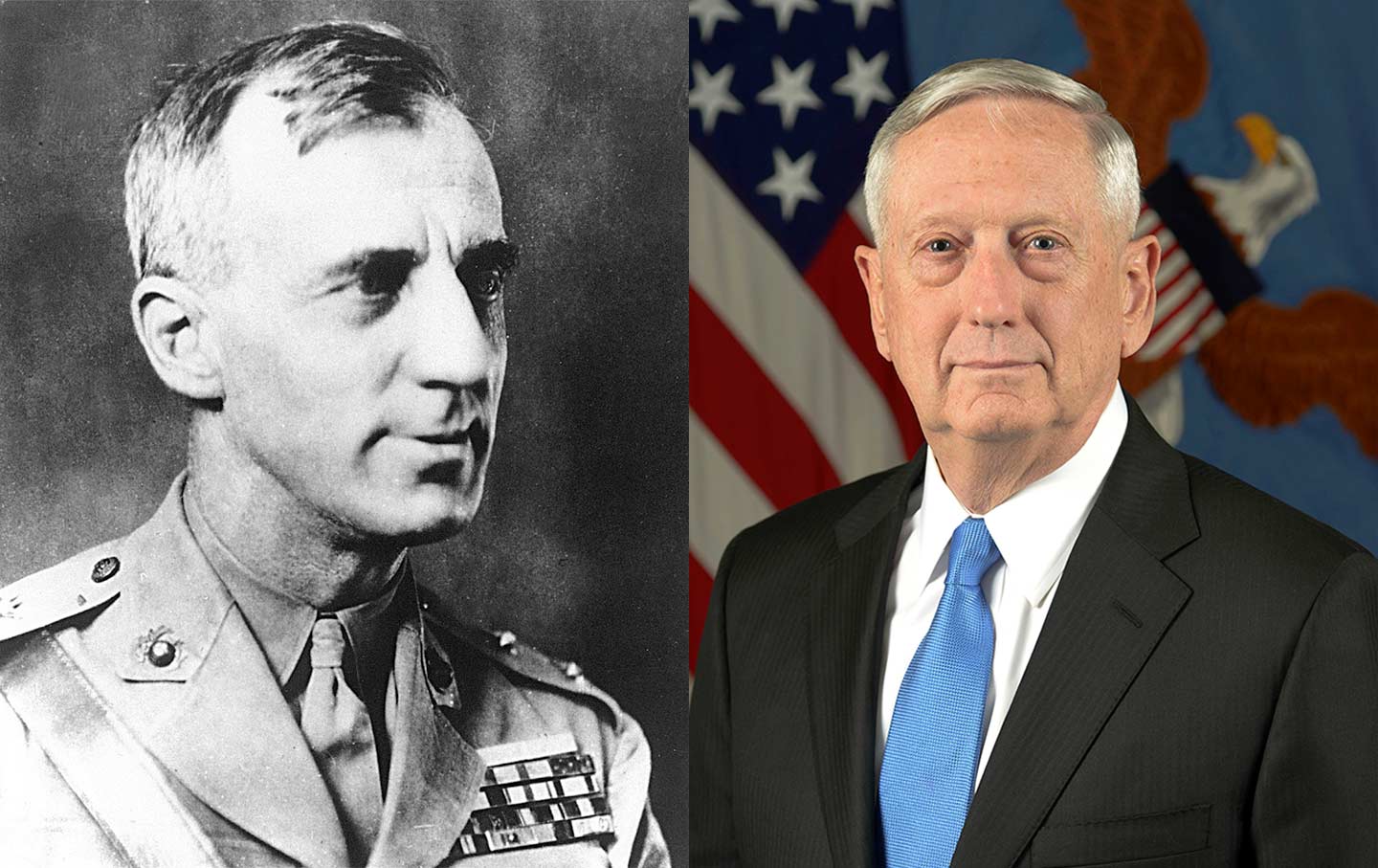 Were he alive today, Smedley Butler would have strong words for James Mattis and other veteran military leaders who’ve remained silent about Trump. After retiring from the US Marine Corps as its top general in 1931, Butler, one of history’s most revered Marines, wrote the book War Is a Racket and became a vocal and consistent critic of war, interventionism, and other domestic threats he perceived.

Our generation has had, aside from a few tweets and the occasional op-ed, mostly silence from former military officials. We don’t have truth-tellers, like Butler, who consistently speak out, soberly helping their fellow citizens understand the clear dangers posed by reckless militarism, and creating the sense of urgency we should all feel. We so desperately need leaders like Butler now.

Exactly one week after the Trump administration’s sudden decision to abandon US allies who led the fight against ISIS in Syria, former defense secretary James Mattis, a retired four-star Marine Corps general who once called our military the world’s “most trusted force” and under whom I served during the 2003 Iraq invasion, appeared on Meet the Press.

Rather than take a principled stand before an international audience, Mattis stayed silent about the far-reaching and long-lasting consequences of Trump’s most recent impulse in Syria.

Silent about the abrupt, senseless betrayal of our Kurdish allies.

Silent on his former boss’s inept acquiescence to a Turkish military invasion.

Silent about the escape of hundreds of ISIS prisoners.

Silent on the shelling of US troops by a NATO partner during an embarrassing retreat.

“I won’t make political assessments right now,” Mattis said, sounding more like an officer in uniform than a civilian who claims to have a ”love-affair” with the Constitution. “Remember that the Defense Department stays outside of politics for a reason. There’s a long-standing tradition, why you do not want the military to be engaged in politics.”

The problem is, Mattis isn’t in the military and hasn’t been since his 2013 retirement from the Marines. Even as he assumed the top leadership position tasked with overseeing America’s armed forces, he did so as a civilian—as the position requires.

Nearly a century ago, the United States struggled through a Great Depression and faced similar dark threats from domestic forces in the form of a fascist plot against the US government—not unlike today. America survived in part because outspoken civil servants of the time rose to confront the dangers. Among them was Smedley Butler.

Every US Marine learns about Butler, that he was a two-time recipient of the Medal of Honor who also inducted the first English Bulldog mascot of the Marine Corps in 1922. What Marines aren’t taught are Butler’s notable post-service exploits as an outspoken national figure who railed against foreign military interventions by the United States and testified before Congress about a fascist plot in the early 1930s to overthrow the federal government. Today, that consistent public critique by a former service member—and a high ranking officer at that—is missing.

In 1934, three years after retiring from the Corps, Butler testified about the fascist plot before a special House committee: “May I preface my remarks by saying, sir, that I have one interest in all of this, and that is to try to do my best to see that a democracy is maintained in this country.”

The retired general later expanded on his decision to testify: “As it then seemed to me to be getting serious, I felt it was my duty to tell all I knew of such activities to this committee. My main interest in all of this is to preserve our democratic institutions. I want to retain the right to vote, the right to speak freely, the right to write. If we maintain these basic principles, our democracy is safe. No dictatorship can exist with suffrage, freedom of speech and press.”

It’s safe to say, thanks to Butler’s determination to speak, the plot was foiled.

Mattis, by contrast, when pressed about his reasons for abruptly leaving the Trump administration last December, would only reference his resignation letter, saying, “I don’t know what more I can say about how I think we ought to treat allies.”

A problem with the so-called “duty of quiet” that Trump’s former defense secretary says guides his civilian conduct is his selective silence. Despite disclaiming “political assessments,” Mattis has felt perfectly comfortable criticizing certain politicians. In the same Meet the Press interview this month, he slammed President Obama for fulfilling a planned Iraq withdrawal. Yet when Mattis said, “We may want a war over, we may even declare it over,” he failed to cite Trump by name or Trump’s many false declarations that ISIS in Syria had been defeated.

It isn’t that Mattis won’t get political. Since leaving the military he has taken political positions on a number of issues like supporting a two-state solution in Israel, criticizing the Iran nuclear deal, and blasting President Obama for supposedly somehow failing our allies.

The fact is, Mattis’s decision to remain silent now is a political choice. It is a strategic calculation he has made rather than an adherence to some code of silence. Through Marine Corps folklore, Mattis attained an exaggerated sense of popularity, which he then parlayed into several lucrative civilian positions that could be negatively impacted if he were to speak out. Kurds be damned.

In the mind of Mattis, our constitutional republic is apparently best served when former military members abstain from exercising their rights to speak, assemble, and protest. The fatal flaw with Mattis’s understanding is that silence, not dissent, imperils our constitutional republic. He fails to grasp that dissent is the quintessentially American activity that brought this nation into existence and has allowed it to survive. To be American is to be political.

Retired general Barry McCaffrey had his own strong words: “Trump shamefully wrecked US national security interests in the Mideast. He handed over the Kurds to a Turkish invasion.” Without action, McCaffrey predicted “a humanitarian disaster.”

Most prominently, last week retired admiral William McRaven, a former Navy SEAL who oversaw the successful takedown of Osama bin Laden, penned a blistering New York Times op-ed with the ominous headline, “Our Republic Is Under Attack From the President.” McRaven issued a stark warning that Trump “doesn’t understand” American values and should be removed from office. This wasn’t the first time McRaven has condemned Trump—and it cannot be the last.

Let there be no doubt: Trump’s impulse to betray our allies and to recklessly negotiate with hostile adversaries, while ignoring expert military and diplomatic advisers, poses a grave threat to America’s national security that must be denounced. America cannot afford for people like James Mattis to respond to Trump’s personal attacks with one-liners—like when he joked, “I guess I’m the Meryl Streep of generals.” Being a veteran means more than that. Our service never stops and our oath to the Constitution, and to one another, never expires.

Now more than ever, our constitutional republic needs leaders, including veterans like Allen, McCaffrey, and McRaven, to speak up—consistently—and drown out the silence of people like James Mattis.

Our country’s future is at stake.