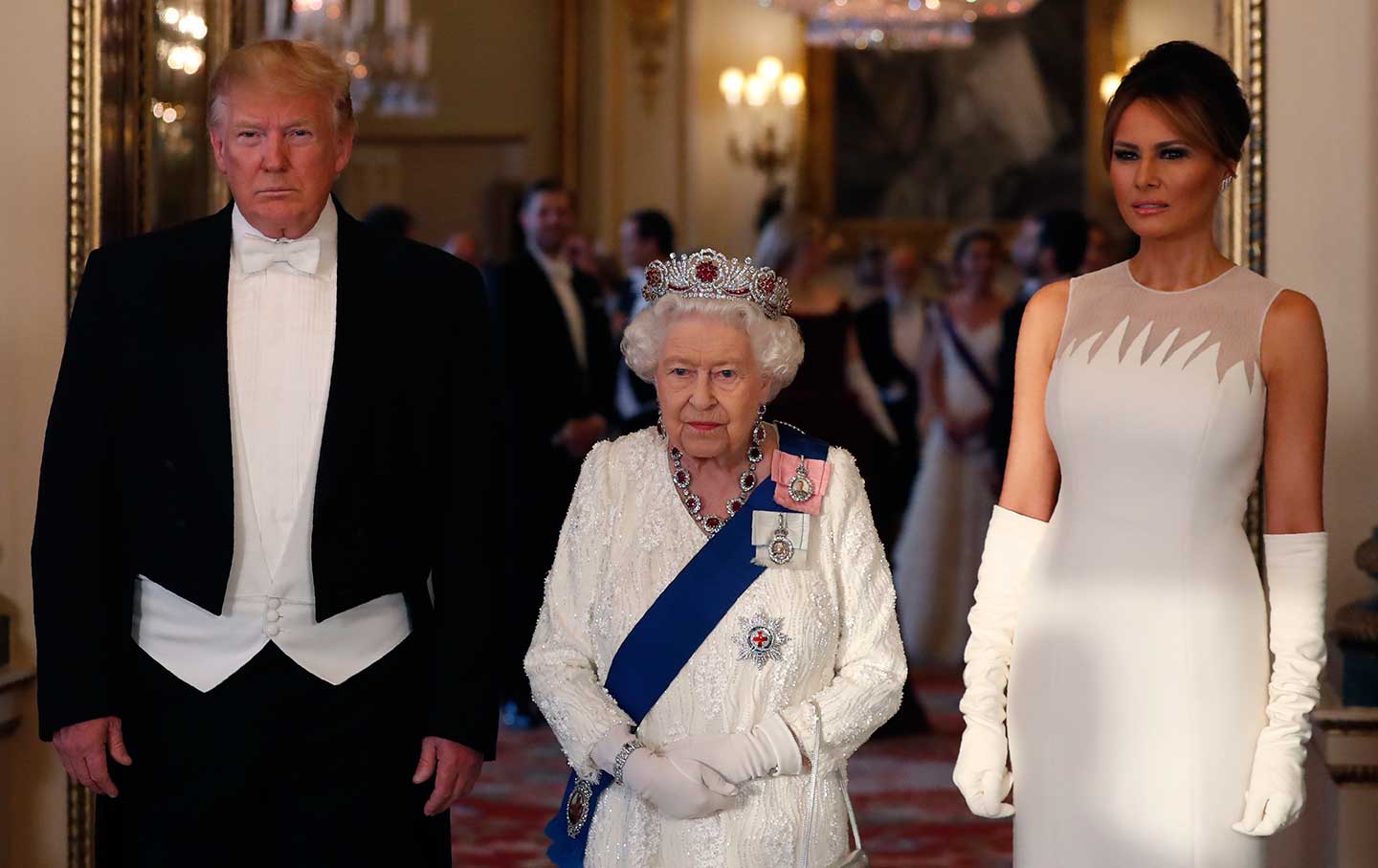 Queen Elizabeth II poses for a photo with Donald and Melania Trump at Buckingham Palace in London, on June 3, 2019. (AP / Alastair Grant)

Referring to “the red-carpet treatment” accorded to Donald Trump and the ignominious confederacy of unindicted co-conspirators that accompanied him to London, the city’s mayor remarked, “In years to come, I suspect this state visit will be one we look back on with profound regret and acknowledge that we were on the wrong side of history.” Why wait? As an American, I’m already regretting the spectacle of the Trumps tweeting pictures of themselves stumbling around Buckingham Palace. It’s not just that, as a republican, I have no taste for the pomp and circumstance that surrounds the British royal family. It is not even that Trumps are so obviously enthralled by imperial excess.

What I have a problem with is the notion that the United States of America is being “represented” on the global stage by an ugly-American cabal of black hats in ill-fitting tuxedos. Mehdi Hasan got it brilliantly right when he said of the president’s decampment to the United Kingdom: “He’s taken four of his five kids with him, his four grifter kids with him to Buckingham Palace. They’ve been posting pictures all night on Twitter of themselves. They’re all loving it. It’s a great day for the whole grifter family.”

I appreciate the thought of an American president upending the monarchy—as George Washington once did—and I relish the prospect of exposing the elitist excesses of a state dinner. But that isn’t what Trump and the grifter kids have been doing. Not at all. They’re in London to embrace the high and mighty and to wallow in the pretentiousness of it all. And they’ve got the selfies to prove it. Trump and the various and sundry Trumpkins have a long history of seeking out these photo opportunities as proof of their “legitimacy.”

There’s always a financial angle with the Trumps, and you can bet that they’ll move to monetize this “legitimacy,” as they make another mockery of the emoluments clause. But, in this instance, there is also a political play.

The president is in a pickle at home. His party got trumped in the midterm elections. His approval ratings are in the tank—42 percent and sinking in the latest Gallup surveys. The special counsel who led a 22-month inquiry into the president and his associates just announced that “If we had confidence that the president did not commit a crime we would have said so.” The US House of Representatives—which is charged by the Constitution with assuring that presidential administration are not reimagined as monarchies—is preparing to hold Trump’s attorney general in contempt of Congress for refusing to comply with a subpoena. The House Judiciary Committee is ready to call former Nixon White House counsel John Dean to testify on the obstruction of justice by presidents who find it necessary to claim they are not crooked. And Republican Congressman Justin Amash has observed that the president has “committed impeachable offenses.”

The Trumps are seeking a distraction from this robust domestic debate about the president’s kingly abuses. And in their typically tone-deaf fashion, they imagine that the finest distraction of all must be a trading of toasts with the current occupant of King George III’s throne.

“The ground beneath his feet is shaky,” explains Inge Kjemtrup, who chairs the group Democrats Abroad UK. “I’m sure my [Republican] counterparts think this is a celebration, but for me the best thing to do when you’ve got domestic troubles is to go do something in another country—to go do something nice and shiny. And if there’s one thing we know about our man, he’s always after something shiny, and this is a perfect example.”

Trump and his traveling party have positioned themselves amid the shiny objects of ancient imperialism. As an American whose ancestors fought a revolution to see off not just monarchy but pretenders to monarchy, I have my own reasons for sharing the view of Kjemtrup when she told Newsweek that “I’m really mortified, frankly, that he is representing the US.”

It is vaguely comforting to have the grifters at a distance, if only for a few days. But soon they will be done photographing themselves amid the UK’s shiny objects, and my only counsel to our British cousins is to reread James Boswell’s The Life of Samuel Johnson, in which it is observed of a disreputable visitor, “If he does really think that there is no distinction between virtue and vice, why, sir, when he leaves our houses let us count our spoons.”