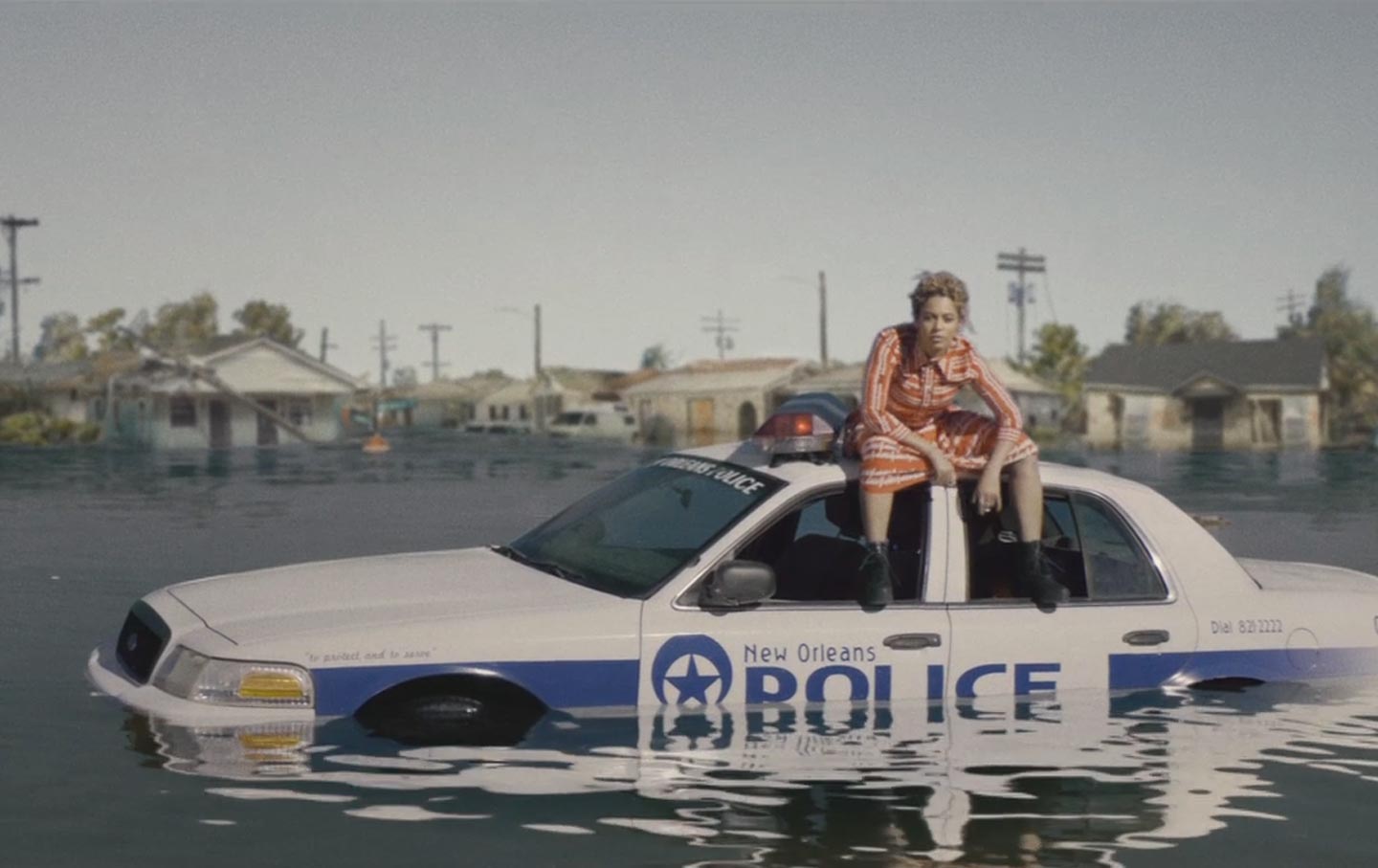 In New Orleans, the weekend that precedes Mardi Gras Day is always a frenzy. Even if one opts out of participation there is no negotiating with the way Carnival season affects daily life. This year, in its midst, Beyoncé released the song and video “Formation,” and followed it up with a performance at the Super Bowl. The night of song’s premiere, I stayed indoors, skipping one of the season’s biggest parades. Instead, I lay in bed watching a New Orleans Police Department squad car half-submerged in water with Beyoncé, the most famous woman in the world, squatting atop the hood and staring into the camera. A now-deceased Anthony “Messy Mya” Barré—someone many of us in New Orleans knew and loved—announces himself from across the ethers, over the video’s beat and flickering lights. Bitch, I’m back, by popular demand. I hear Big Freedia’s laugh, and with that I am transported back to those small clubs after Katrina, waiting for Freedia to take the stage and rap over an earlier Beyoncé hit, “Irreplaceable.” Funny how things change. Funny how they stay the same. I feel Beyoncé is giving a nod to that fact, so I follow her and the camera.

In the days that followed the release of “Formation” and Beyoncé’s Black Panther–inspired Super Bowl performance, a slew of articles were written. It came as no surprise to me that much of the critique of the song, video, and performance centered on questions of authenticity. How “real” is the depicter? The depiction? How real can it really be? Within the black diaspora, our cultures reflect the scope of our long walk across the earth. In “Formation,” I see a horseback rider, a black Indian in his suit, a man in a fez—all fragments of a story that scattered us, literally, all over the world. To be a black American is to reside in a place of existential mystery. Some things are impossible to know for sure. What we do have is the evidence of what we have been able to create in a space of loss and redaction that is the United States.

New Orleans is a culture defined by Middle Passage survivors and indigenous nations; it has always been involved in a complicated conversation about itself with the outside world. Generations of resistance to captivity birthed a complex set of rituals and practices, and an economy that thrived first off the bodies and labor of our people now turns on our traditions. This relationship between culture and commodity has consistently forced upon New Orleans questions about authenticity. Over the years, I’ve fielded many such questions and conversations. How “African” is it? How “Caribbean”? Are they really “Indians”? How black is this particular version of “American” black? These discussions usually leave me with questions of my own. Mainly, what does it mean to be from a people who have had their official origins erased and their legal identities mostly determined by outside forces?

Working through such questions has forced me to reorient myself, to attempt to understand my body in relationship to the rest of the planet’s citizens. My life in New Orleans is defined by the large bodies of water that surround me, and so I often look to other large bodies of water for guidance when trying to understand the imperial paradigm in which we all live. It is the water, after all, that brought me here in the first place. The Port of New Orleans has made possible a perpetual flow of goods, information, free and enslaved people, in exchange, across oceans and borders. In the present, this reach is extended by the ease of the Internet. I can see instantly all the places around the world that the culture of black New Orleans has touched. I am reminded that enslaved people have been crafting international relationships to agitate for freedom and to exchange culture for centuries, and this realization is what reorients me. The transnational alliances of the varying enslaved, indigenous, free, and maroon communities of New Orleans and its surrounding areas reveal much about the way forward through the current hostile racial climate.

The enthusiasm to create, to remake the new landscape in your own image, is a powerful resistance of its own.

In Gwendolyn Midlo Hall’s Africans in Colonial Louisiana, she discusses the beliefs of the Bambara, a Mande people and one of the nations that made up the early population of the Louisiana colony. They had already seen the rise and fall of the Malian empire before moving into West Africa and, eventually, across the Atlantic in captivity. The Bambara believe that the world emerged out of a moving void, which through a complex and slow process gave way to vibration and voice and eventually led to the creation of sound, creatures, and sentiment. This cosmology emphasizes the organizing potential of music, is flexible, and is designed to be portable. The Bambara arrived in Louisiana with a worldview in which sovereignty did not rest on the acquisition of territory, but grew through people sharing a spiritual system, philosophy, and familial bonds.

Cultures of resistance often spring near large bodies of water. The kind of resistance that can’t be defined by questions of winning and losing, right and wrong, or purity of identity. Cultures made up of rituals and practices that must be maintained, through struggle, in order to survive the systems and the environments in which they’re born. Whether it is in New Orleans, Gaza, Basra, Massawa, or Mogadishu, often where there are ports, there are battles for control over identity. And for control over the waters, the goods being imported and exported, the profits. Often there is a population of people who benefit, and those who will suffer. More often than not, black and brown bodies experience severe exploitation, their very selves criminalized to justify it all. Their deaths do not bear much notice or, if noticed, much justice.

The music we make around these ports often reflects the dual nature of our existence. The music of Afro-Iraqis, of Black New Orleanians, of Eritrean Italians is often beautiful and morose, lulling and frenetic at the same time. A few months ago, I had the privilege of attending a screening of Alan Maglio and Medhin Paolos’ documentary film Asmarina in Ferrara, Italy. Asmarina explores the experiences of the habesha community in Milan, Italy. Watching the film as a black American, I related to their struggle with a national narrative that often excludes their contributions to the national culture, as well as their deep longing for a place either they had never been or to which they cannot return. The point of no return is a place few peoples know. The artistic response of the musicians among the habesha felt familiar, as did the rhythm and beats that conveyed these deeply felt sentiments. The enthusiasm to create, to remake the new landscape in your own image, is a powerful resistance of its own. As a descendent and survivor of catastrophic encounters with water (the Middle Passage, Hurricane Katrina), I cannot help or deny the connections between myself and the asylum seekers in Europe, people who now face water in order to survive and are in many cases meeting their deaths.

These places near large bodies of water, at the gateways, where the beat and the descendants of human trafficking are found, are the places where my mind, if not my body, can always be found. My understanding of my body’s relationship to the current shape of American and European imperialism and the consequences that has had on movement for black and brown bodies has come into sharper focus. I find myself less willing to define and be defined by colonialism and more insistent that the broader borders of experience shape me. It is a commitment toward making a map of humanity, to understanding my position as a balance of opposites, a formation of old and new, East and West.

In New Orleans, it is Lundi Gras, the day before Mardi Gras Day. All normal city functions have been halted or altered and yet, in nearby Jefferson Parish, sheriff’s officers have just pursued and shot 21-year-old Eric Harris to death. Officers provide this account: After crashing his vehicle, Harris attempted to put it in reverse; the police, fearing for their lives, opened fire. Harris’s girlfriend, who was riding in the passenger seat, disputes this account, saying that they were both disoriented after the crash and the bullets came upon impact. Even during Mardi Gras, they keep shooting.

I watch Beyoncé’s “Formation” and watch the young boy who dances and conducts a line of police officers with a little bit of awe. One more time for the living and the dying. The dying and the living. For those among us who have never stopped resisting. It’s Carnival time, and I’m willing to go where my feelings lead me. As soon as the video is done, I pause, take a moment to breathe, and immediately watch it again. I’m left considering what it means to access that intermediary realm between living and dying, to come from the water. Also I am thinking about how art, particularly music, has the ability to inspire and propel action to do what a million essays could never do, compelling the whole body in motion; so much can be carried in a tune. I thank the ones who came before for this knowledge and ask them for the ability to make words move and breathe with the spirit instead of dismembering it. Don’t collapse the beat, or at home, if ain’t the beat then it ain’t me.