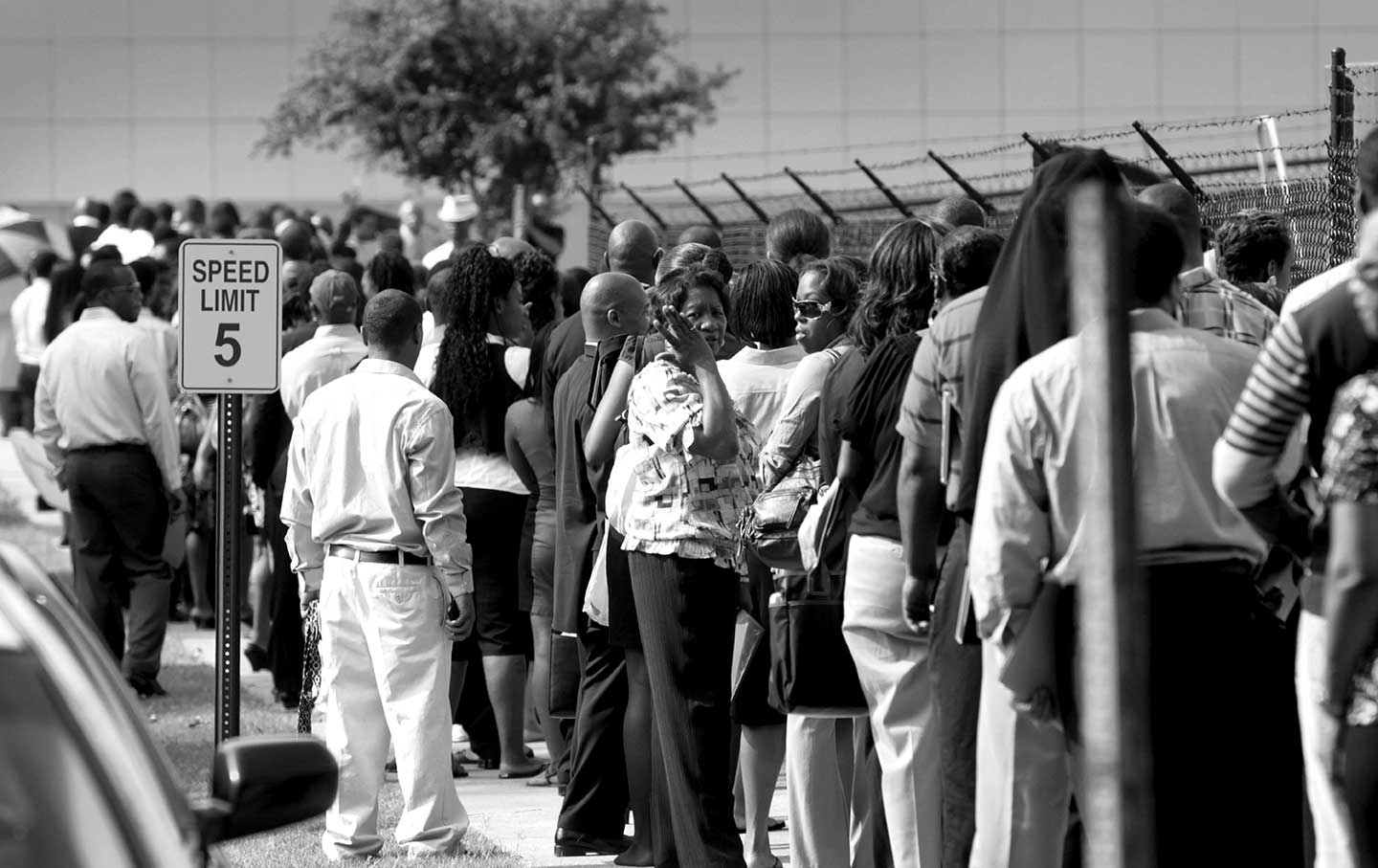 Anthony Hamilton’s voice sounds the way a recession feels: full of struggle and loss. In 2008, as the US economy came crashing down, the North Carolina crooner deployed his tenor in the ballad “Cool.” He wanted folks to hear that it didn’t take much money to have a good time. He sang that when all else withers, “we can fill up on love alone.” It was a beautiful song, but it was no match for Wells Fargo’s “ghetto loans.”

As the country fell deep into recession, black communities plummeted even further, into what Princeton scholar Eddie Glaude Jr. terms the Great Black Depression. Targeted by predatory mortgages for “mud people,” as Wells Fargo officials called them, then left behind by a color-blind stimulus package, black folks felt the financial crisis acutely. White unemployment hit a high of 9 percent to black unemployment’s 17. While 4.5 percent of white recent borrowers lost their homes, 8 percent of black recent borrowers lost theirs. The fall was tremendous, with black America losing half its wealth.

“‘Recession’ is a very scary word for black people in this country,” says labor economist and City University of New York professor Michelle Holder. In her book African American Men and the Labor Market During the Great Recession, she asserts that as unemployment rose in the last recession, the severity of workplace discrimination did, too. The swelling supply of labor activated employers’ bigoted preferences like an enzyme. In 2010, 18.4 percent of black men were unemployed—a higher proportion than for any other racial or ethnic group. “It’s the old adage that if white America gets a cold, black folks get the flu,” she says. “All economic indicators support that.”

Beyond Bailouts: Solutions for the Next Recession

How to Not Waste the Next Economic Crisis

Recessions Are Racist (But They Don’t Have to Be)

An Economy for the Whole Family

Black women, too, feel exacting pain during downturns. They often work in sectors more sensitive to economic fluctuations, and since many are the breadwinners in single-parent households, when they lose their jobs, their whole family is imperiled. “As a female black economist, when I hear the term ‘recession,’ my thoughts automatically go to the black community, which will be hit harder than the white community,” Holder says. “That’s just going to happen. So we need to prepare.”

One way to soften the blow is for Congress to pass legislation that would prevent employers from rejecting job seekers because of their credit score or criminal record. Pointing to a report by the Federal Reserve Board that analyzed segregation and low credit scores, Holder argues that “using credit information as an employment screening tool likely has a disparate impact on minorities.” The federal government could prevent employers from replicating existing racial disparities by passing a national version of New York’s Stop Credit Discrimination in Employment Act.

Similar disparities plague America’s carceral state. Passing legislation to ban the box (the place on job forms to report criminal convictions), such as the Fair Chance to Compete for Jobs Act, would also decrease discrimination against black job seekers. Policies tackling recidivism and unemployment discrimination and promoting workforce training would address racial inequality as well. But the best way to eliminate the discrimination endemic to recessions is by creating a federal jobs guarantee. Through programs like a National Investment Employment Corps, everyone willing and able to work would be given a job, thus eliminating racialized employment disparities.

Short of sweeping reforms, the need to fortify the country’s social safety net is crucial. AFL-CIO chief economist William Spriggs says implementing a financial transaction tax, stabilizing state and local government investment, and federalizing the country’s unemployment insurance program could temper how the next recession affects all Americans and communities of color in particular.

During downturns, state and local governments slash spending to balance their budgets. That austerity winds up gutting local schools and municipal safety and sewage systems. It contributes to local disasters like the water crisis in Flint, Michigan, and the bankruptcy of Stockton, California. It deprives vulnerable citizens of public services when they need them most. Creating a tax on financial transactions could fund a revenue insurance program at the state and local levels. This fund would subsidize government spending and help keep vital public services affordable, safe, and available during a recession.

Additionally, nationalizing the states’ disparate unemployment insurance programs would allow the federal government to provide people who are out of work with consistent benefits until the economy fully recovers.

Beyond policy, Spriggs stresses that the main impediment to effective policies is ideological. The last recession was so massive that Republicans had no choice but to support a stimulus. But in milder recessions, recovery can be top-heavy: Wealthy banks, firms, and individuals can bounce back quickly, creating an appearance of economic health that leaves out working-​class families. “As the economy becomes more unequal, the political stonewalling that the Republicans are likely to put in place will exacerbate,” he says. “If you look at the share of the economy the bottom 20 percent get, it’s tiny, so [their] suffering doesn’t measure in the macroeconomic picture.”

Just as the big banks were too big to fail in the last recession, black families might be too small to save in the next one. “This political melee is dangerous,” Spriggs warns. “If this downturn is mild, it is going to hit people at the bottom.” Thus the stakes for black families are enormous. They bore the brunt of the last recession and missed out on much of the subsequent recovery. Three years ago, then-candidate Trump asked black voters, “What the hell do you have to lose?” If a downturn hits, the answer could be “Everything.”