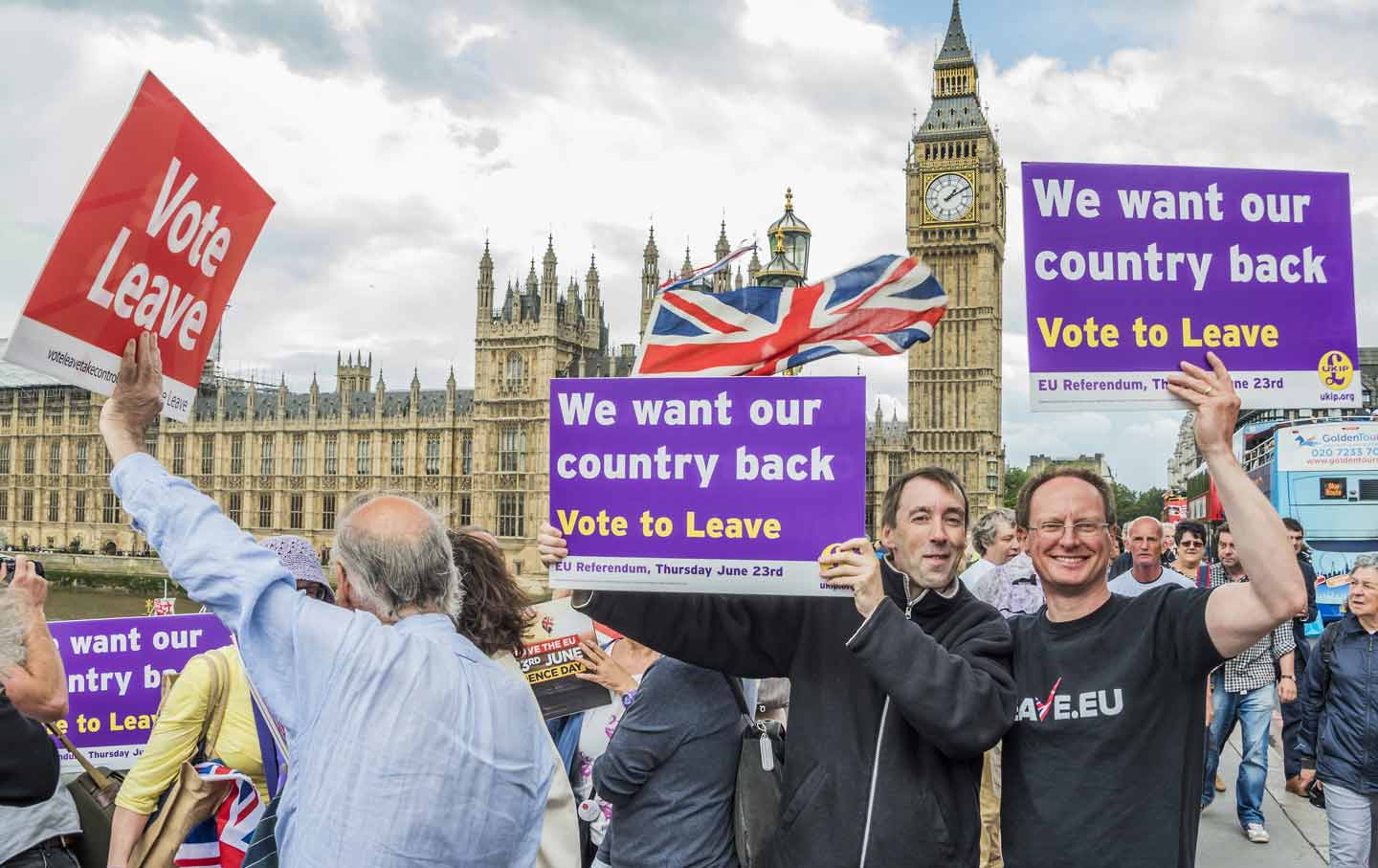 At 4 am, following the UK referendum on EU membership, Nigel Farage, the leader of the Eurosceptic UK Independence Party, gave a tentative victory speech. Bullish and beaming, but couching his cheer in caveats that not all areas had declared results, flanked by young men in suits jeering and pogoing, Farage announced that if the Leave campaign had won, “We will have done so without a single bullet being fired.”

This isn’t quite true. One week earlier, the pro-EU Labour Party MP Jo Cox was shot and stabbed to death in her constituency, by Thomas Mair, a local man with links to far-right groups including the English Defence League and the pro-Apartheid Springbok Society. Several days after her murder, her husband, Brendan Cox told reporters, “She was a politician and she had very strong political views and I believe she was killed because of those views.”

The EU referendum became a conduit for anger on many issues: immigration, economic inequalities, London’s disproportionate economic boom, and disenfranchisement by an aloof political elite, an elite that after the vote appears shaken. At 8:30 am, David Cameron announced his resignation. The speed of his resignation threw prominent Leave campaigners into disarray: Former London mayor Boris Johnson was busy arguing that Article 50, which triggers the mechanism for a country to leave the EU, didn’t have to be invoked immediately. The swift resignation of the prime minister signaled that Conservatives were happy for the Leave campaigners to be forced to confront the consequences of their wishes as soon as possible.

For the left, the outcome will prompt much soul-searching. The Labour party could use this opportunity to shore up support and lead a progressive fight for the best possible trade and migration terms. Instead, several Labour MPs have put forward a motion to condemn Jeremy Corbyn, dredging up longstanding disgruntlement that has split the party since Corbyn’s surprising victory last year.

Throughout the campaign, polls showed a close battle, with both sides expecting a paper-thin victory at various points. Politicians and commentators spoke of a divided Britain: one of young “metropolitan elites” in cities voting to remain, in contrast to older ordinary voters in smaller towns still weathered by the recession and angered by the free movement EU membership allowed. The reality, as it has an irritating tendency to be, is more complex: Voters were more divided more by educational level, social class, and income than by age. But the votes were also geographically divided: Some large cities such as Sheffield and Birmingham voted to Leave, while London had some of the highest rates of Remain voters. More interesting is the fact that Scotland voted unanimously to Remain and Northern Ireland was overwhelmingly pro-EU, while Wales predominantly backed the Brexit option.

So voters are divided, but now countries are too. Both Scottish and Northern Irish politicians have stated they will seek to vote on splitting from Britain, Northern Ireland’s Sinn Fein calling for reunification with the Republic of Ireland, and Scotland considering another independence referendum after 2014’s rejected vote. The ramifications for peace in Northern Ireland are at stake, but if Scotland alone secedes, the future face of Britain will change markedly, with little prospect for a Labour majority, which depends on heavily today on Scottish voters.

Conservatives wanted the vote before summer newspapers fill with photographs of refugees being rescued from dinghies.

On the face of it, the vote was less about EU membership, despite arguments couched vaguely around sovereignty, and more a referendum on immigration: The Leave campaign’s slogan “Take Back Control” vaguely centered on law-making powers with the implicit but often explicit message that control pertained to borders. Free movement in the EU became a bogeyman: The Conservatives were keen to force the vote before the summer when newspapers fill with photographs of desperate refugees being rescued from flimsy dinghies, ramping up rhetoric that the EU is being “swamped” by people fleeing their country of origin. Across the Channel in Calais, the migrant camp has rarely been out of the headlines, with migrants doggedly trying to enter the UK to claim asylum.

Many of the areas that voted to leave the EU actually have low migrant populations, but share a sharp rise in poverty over the past decade. After the recession, the UK economy has precariously recovered, but recovery is geographically tilted toward London. In the capital, house prices have risen massively, and wages are far beyond the average seen elsewhere in the country. Outside of London, jobs have been lost, wages depressed, and public services cut massively. Since 2010, the Conservatives’ austerity measures have slashed funding for the NHS, welfare spending, and budgets for social and public services: The keener the deprivation in an area, the higher the cuts, proportionally. So the poorest have borne the brunt of austerity, and had little left to lose. Warnings that the UK faced economic ruin if it voted to leave, borne out by sterling’s collapse to its lowest point since 1985 today, had little effect on communities that already feel excluded from the reported growth in other parts of the EU.

Many of the areas that voted to leave the EU actually have low migrant populations but share a sharp rise in poverty.

Toward the end of the campaign, both sides began to address this angle—those expressing what often amounted to racist views were described as having “legitimate concerns,” a hackneyed and euphemistic phrase that caught on quickly, but did not address the scapegoating of migrants. Switching the scapegoat from the government to the faceless migrant, whether from Syria or Poland, is easier when people are scared for their livelihood, and more convenient for the politicians campaigning on both sides.

In a country racked by inequality, fear is easy to capitalize on. But as well as being afraid, people feel disenfranchised—and they are. Both Labour and the Conservatives have for decades withdrawn into themselves, creating a political class that is drawn predominantly from a homogeneous and elite tranche of society, wealthy and socially removed from the constituents they represent. Many politicians attended the same university, Oxford, and even studied the same course—Politics, Philosophy and Economics. The media are much the same. It’s easy then to believe the establishment is a stitch-up designed to perpetuate inequality and keep an eye out only for themselves. Recent paranoia about media outlets, including the BBC, indulging in “blackouts” of protests reflects this fear. And during polling hours, a conspiracy theory circulated that pencils were issued in polling stations to allow government bodies to erase votes, with people on social media encouraging voters to bring pens.

This alienation, coupled with the opportunity to kick back at the establishment, led to a seismic vote to withdraw from the European project. For the left to win back lost voters, the root causes of this paranoia and ennui have to be addressed, and that requires a committed anti-austerity movement that can properly challenge the current consensus, rather than bow to it. But at this point, it might be too late to fully repair the wounds inflicted by years of economic deprivation, and the withdrawal from the EU that has now been triggered.