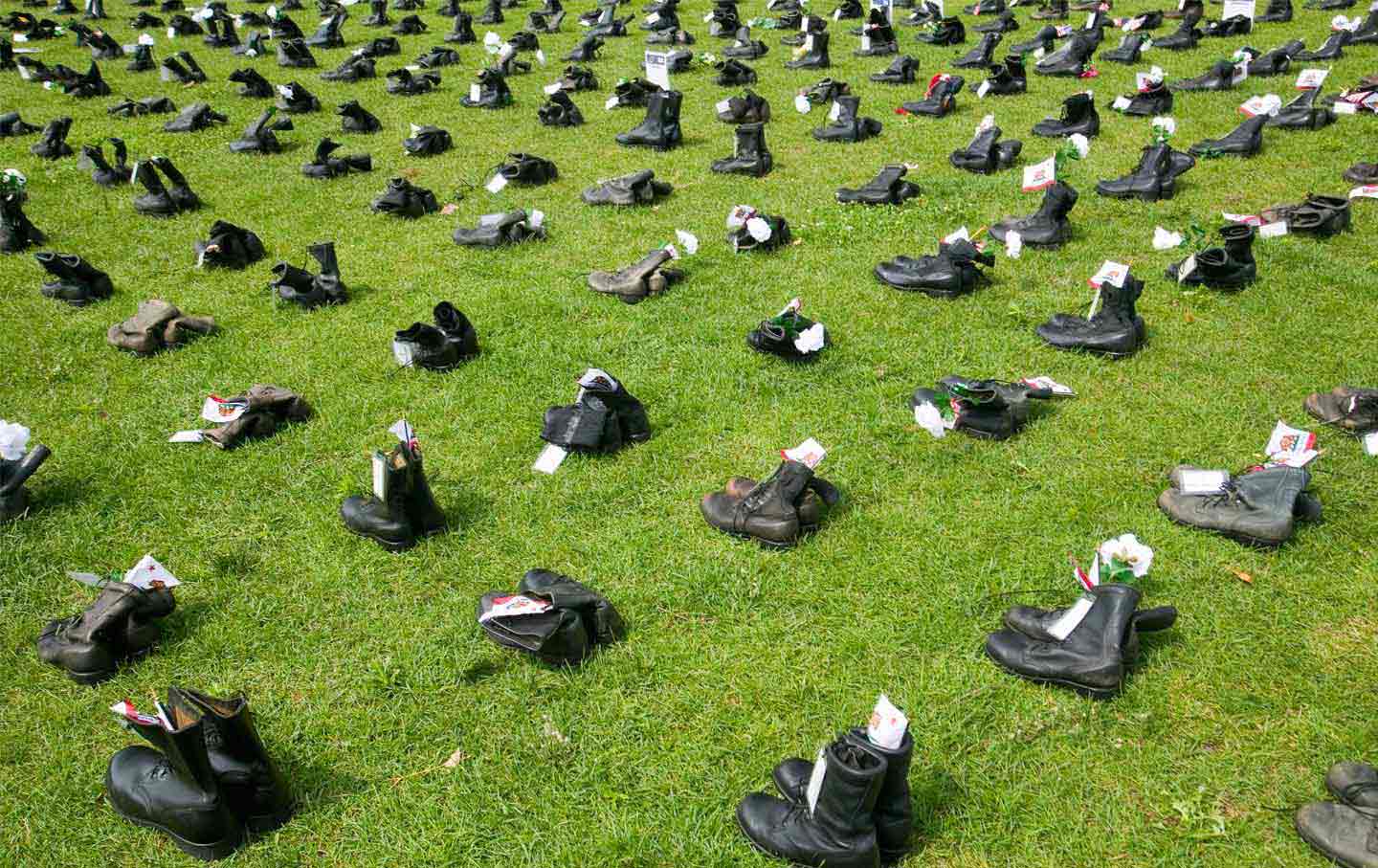 Just in time for next year’s Pentagon spending debate, a new report is calling for a huge increase in the Defense Department’s budget, which is already at one of the highest levels since World War II. The document was produced by the National Defense Strategy Commission, a congressionally mandated group charged with assessing the Trump administration’s new national-defense strategy.

The premise of the new report is that America faces a “national security emergency” that leaves its ability to defend “its allies, its partners, and its own vital interests” increasingly in doubt.

As its solution, the commission calls for an increase in Pentagon spending of 3 to 5 percent above inflation for at least the next five years. According to calculations by Taxpayers for Common Sense, the high end of this range would mean an annual Pentagon budget of an astonishing $972 billion by 2024—a potential boon for Lockheed Martin and its fellow weapons-makers, but a disaster for US taxpayers. It is unlikely that Congress will sign off on such a hefty increase, but the fact that it has been put forward at all will provide more rhetorical ammunition for the hawks on Capitol Hill, making it all the harder to rein in runaway Pentagon spending.

It’s not as if the Defense Department is starved for funds. The United States spends more on its military than the next seven countries in the world combined (five of which are US allies). The increase in Pentagon spending in the past two years alone is greater than the entire military budget of Russia. And that’s before the massive increases proposed by the strategy commission.

The United States Is Militarizing the Globe

Perhaps this proposal shouldn’t come as a surprise, given the source. The commission was co-chaired by Eric Edelman, an Iraq War supporter and former top aide to Vice President Dick Cheney, and Gary Roughead, the former chief of US naval operations and a current board member of Northrop Grumman, the fourth-largest weapons contractor in the United States.

The members of the National Defense Strategy Commission followed a time-tested playbook. They start by enumerating a long list of potential threats, exaggerating them in scale and importance; then they assert that the best way to address these challenges is to double down on the military-first approach that has characterized US foreign policy throughout this century. Yet this argument ignores the fact that the greatest threats we face cannot be solved with military force, and that attempting to do so will have disastrous consequences, as America’s nonstop wars in Iraq, Afghanistan, Pakistan, Libya, and Somalia have demonstrated. The commission report gives lip service to diplomacy, but only as an adjunct to military power, not as a value in its own right.

We should be spending less time figuring out how to fight wars with Russia, China, Iran, or any other nation, and more on how to forge partnerships to address the biggest challenges to continued life on this planet: climate change and nuclear weapons. But the new report is silent on the first problem, while on the second, it has not one discouraging word for the Pentagon’s dangerous, counterproductive plan to spend $1.2 trillion on a new generation of nuclear weapons over the next three decades.

Thankfully, there was another study released last week that takes a more critical view of America’s policy of endless war and runaway military spending. Issued by the Costs of War Project at Brown University, it estimates the full price of the United States’ post-9/11 wars at $5.9 trillion—a stunning figure when you consider that the wars in Iraq, Afghanistan, and beyond have caused far more harm than good. The study takes a comprehensive look at the War on Terror, from the direct costs of overseas military operations to current and future spending on the veterans of those conflicts, to the budget of the Department of Homeland Security, to the interest on the debt resulting from the fact that these wars have been financed through deficit spending.

A companion report by the Costs of War Project tallies the immense human costs of the post-9/11 wars: over 240,000 civilian deaths, more than 21 million people displaced, widespread environmental devastation, and over 300,000 veterans suffering from traumatic brain injuries, to cite just a few examples. In the face of this catastrophe, the idea that a more militarized US policy is the answer to the world’s security challenges is absurd.

When the new Congress convenes in January, let’s hope it takes a fresh look at the consequences of our current policy of endless war and continuous preparation for war—and puts the report of the National Defense Strategy Commission back on the shelf, where it belongs.