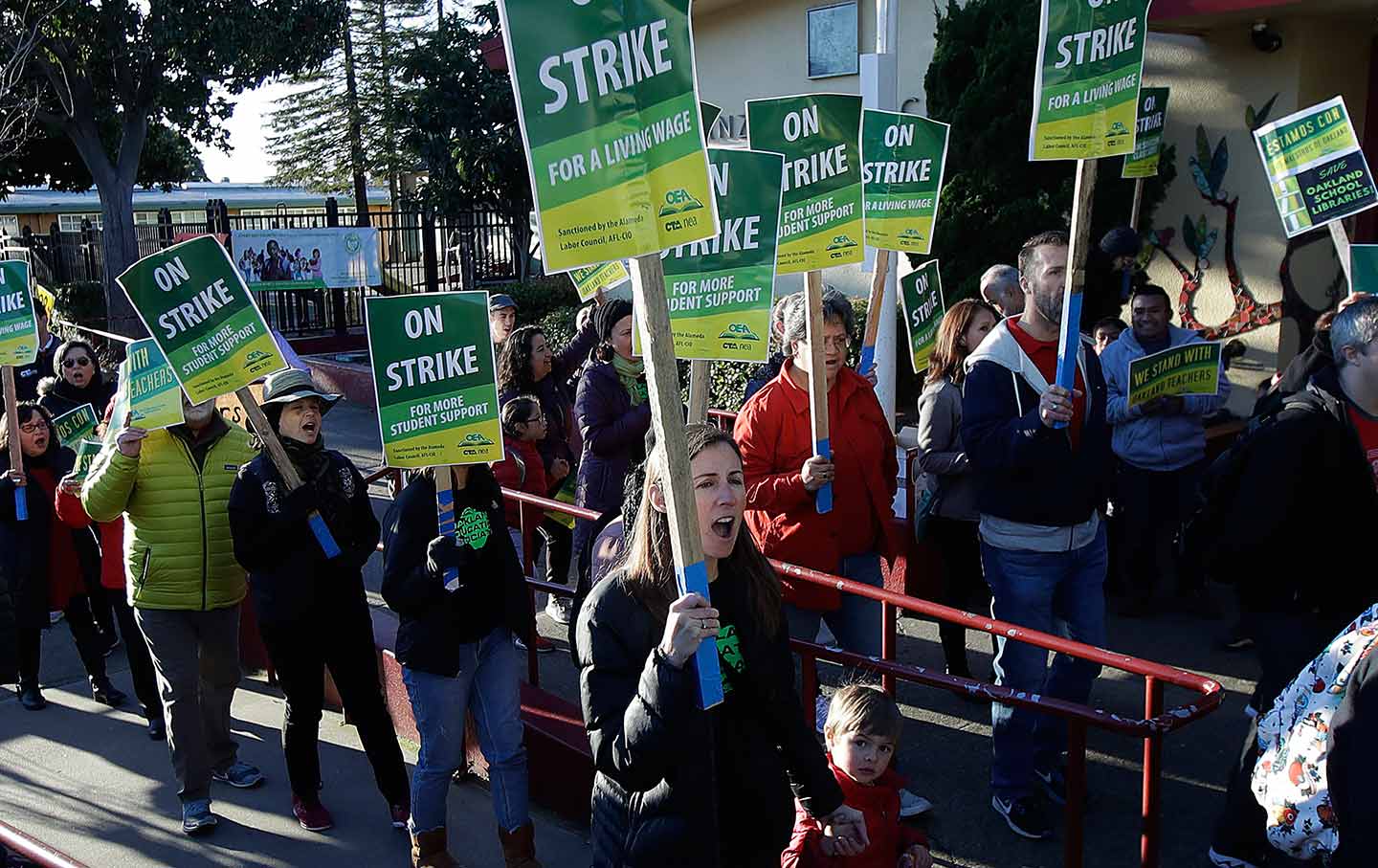 After over two years of fruitless contract negotiations, Oakland teachers are going on strike this Thursday to demand lower class sizes, more support for students, better pay, and the preservation of public education. Like January’s walkout in Los Angeles, this is fundamentally a struggle to save Oakland’s schools from the downsizing plans of billionaire privatizers. Oakland already has a higher percent of charter students than any other city in California—and this number is set to skyrocket if the school board is allowed to move forward with its plan to close 24 of the city’s 87 public schools.

Decades of underfunding, privatization, and district mismanagement have taken a toll on Oakland’s school system. The city currently has one nurse for every 1,350 students and one guidance counselor for every 600, well below the national average. Learning conditions have suffered from high class sizes and constant teacher turnover: One in five teachers quits the district every year.

In a city where the average one-bedroom apartment costs over $2,300, a starting teacher salary of $46,000—roughly $20,000 less than in neighboring districts—is not nearly enough to make ends meet. Keith Brown, an Oakland native and president of the Oakland Education Association (OEA), explains that “teachers, quite frankly, cannot afford to stay in this city—we have a situation where six teachers are sharing studio apartments or commuting two-plus hours a day to work.” In a sign of the times, the person delivering food to yesterday’s OEA leadership meeting turned out to be a teacher at Bret Harte Middle School. “That’s why I’m going on strike,” she explained. “I shouldn’t need a second job to survive.” 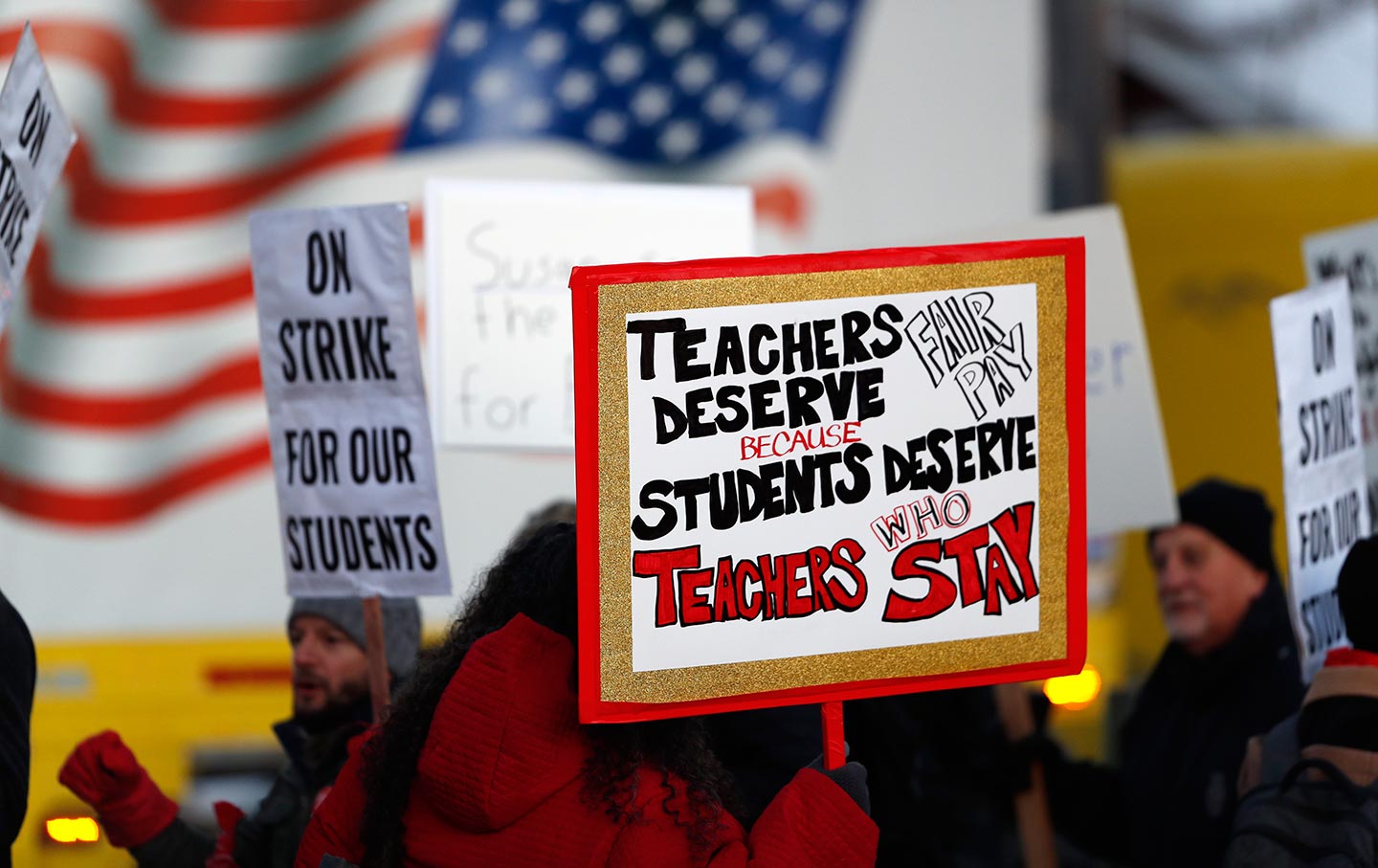 Oakland’s schooling problems have various sources. One is poverty; 74 percent of students qualify for the free and reduced-price meals offered for low-income families. Contrary to what Oakland’s privatizers claim, it’s not possible to overcome deep social inequalities and traumas through education alone—especially when schools are severely underfunded.

Another is state disinvestment. Deep-blue California is 43rd out of 50 in per-pupil funding. Yet these broader problems have been exacerbated in Oakland by over 15 years of corporate “education reform.” Beginning with a 2003 state takeover, district leaders trained at the Broad Academy have used the real problems in Oakland schools to push for privatization as a supposed alternative. Billionaires like Eli Broad, Bill Gates, and the Walton Family in subsequent years have funneled massive campaign donations through the astroturf group GO Public Schools in order to capture the school board. Today, about 30 percent of the city’s students are in privately run, publicly funded charter schools.

One result of this corporate imposition has been a surge in district spending on administrator salaries and high-priced consultants. Another is deepened school underfunding. According to a recent study, charters take over $57 million in funds from Oakland public schools yearly. Bringing that money back into public education would allow Oakland to reduce class sizes to 18 per class in all elementary schools and double the number of counselors and nurses.

Aiming to reach their goal of a 50 percent charter “market share”—and encouraged by a recent $10 million grant from the Gates Foundation—Oakland district leaders are now seeking to impose a “portfolio model” in which schools are forced to compete against each other to survive. Toward this end, Oakland superintendent Kyla Johnson-Trammell has announced an ambitious plan to close 24 schools over the next five years.

According to OEA president Keith Brown, “these school closures are specifically targeting black and brown communities—that’s why the fight for public education is fight for racial justice.” As such, Oakland’s walkout is not only a battle for a living wage and better learning conditions; it’s also a struggle against the displacement of working-class communities of color from their home town. For many teachers and students across Oakland, the strike is the latest expression of the city’s long and unique history of labor militancy and black radicalism, immortalized in the 1946 general strike and the founding of the Black Panthers.

Though Oakland’s activist legacy looms large, it was above all the recent teachers’ upsurge across the United States that inspired the city’s educators to risk walking off their jobs. Eager to absorb the lessons of this national movement, and to lean on its momentum, OEA has hosted events with strike leaders from West Virginia, Arizona, Kentucky, and, most recently, Los Angeles. Brown notes that “we’ve learned so much from them about the power that we have as workers when we stand united—and when we strike.”

Winning in Oakland won’t be easy. While unionized teachers in Los Angeles spent years systematically building toward their strike, the level of organizational infrastructure in Oakland is more uneven. And while there’s some signs that the district is willing to make concessions on educators’ demands around pay and class size, reversing the proposed school closures will be a serious challenge.

Oakland’s educators’ movement, however, has been buoyed by the eruption of high-school student walkouts, self-organized teacher wildcats, and declarations from other school employees’ unions that they will respect OEA picket lines. Support from the community has been similarly overwhelming. Pastors have decided to open their doors to care for children during the strike and a “Bread for Ed” coalition initiated by the East Bay Democratic Socialists of America has raised over $85,000 to provide food for striking students and teachers.

For the first time in a generation, educators have put the privatizers on the defensive. In the wake of Los Angeles—and following this week’s victorious anti-charter strike in West Virginia—there are good reasons for Oakland teachers to feel confident. OEA president Keith Brown is convinced that “people power in Oakland can defeat the billionaires.” Events over the coming days will put this contention to the test.