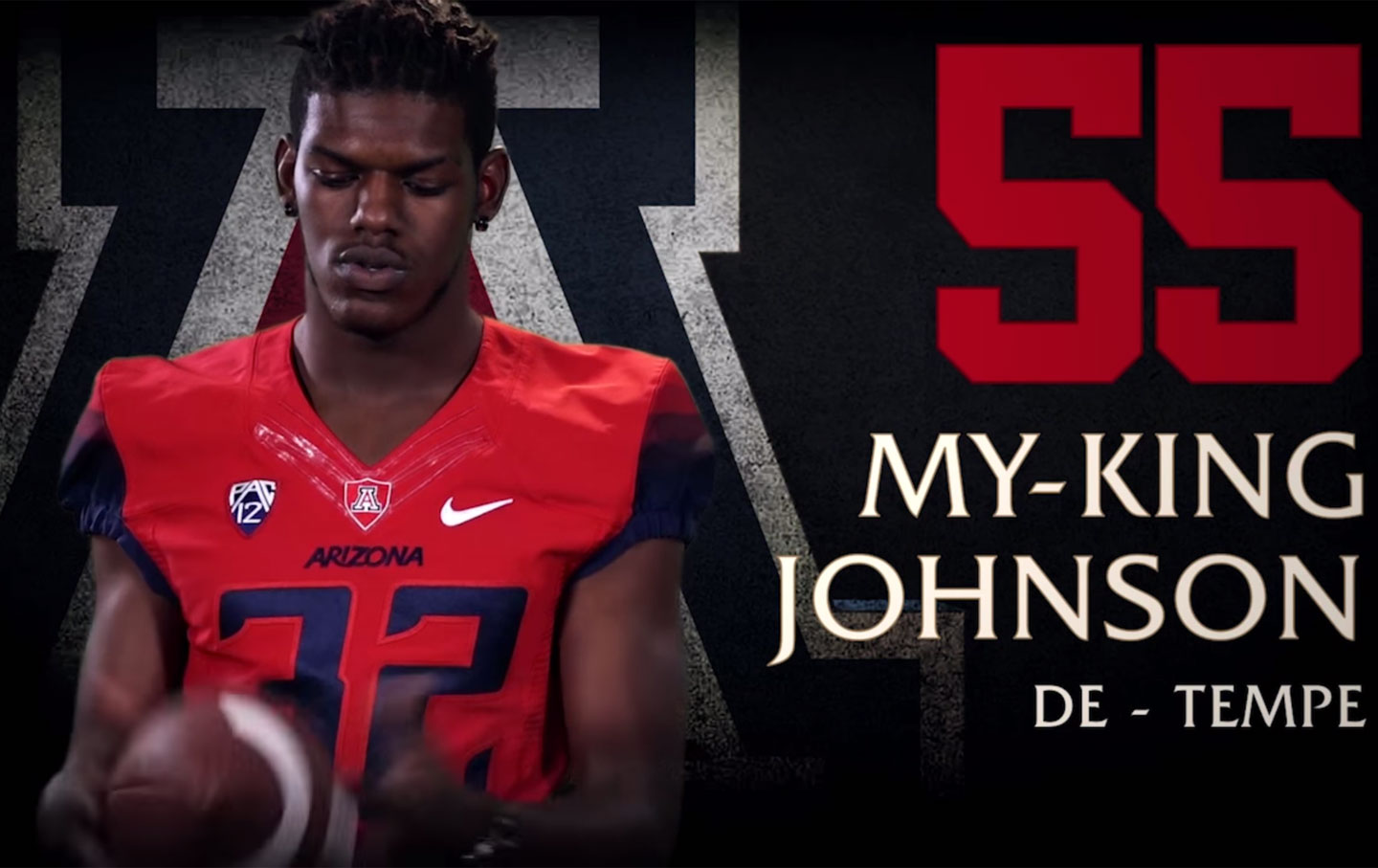 “It can put a target on my back. But whatever.” So said My-King Johnson, Tempe high-school football star, incoming first year at the University of Arizona, and all-state defensive end who is about to become the first openly gay scholarship football player in Division I sports history.

Johnson, at six-foot-four and 225 pounds, is a blue-chipper who verbally committed to UCLA before deciding to stay close to home. He will be described as a trailblazer because he is open about who he is. There is risk in his decision, in the violent, hyper-macho world of football. And yet this “target on his back” causes Johnson about as much worry as some dust on his shoulder.

Johnson has been a dream student at Tempe High School. He rocks a 3.8 GPA and plays tuba in the school band. He is one of four children, raised by a single mom working three jobs. For the past two years he has lived with his grandmother as his mother moved to Seattle for better pay. His sexuality would be a minor detail if not for the fact that he also plays football. Given the fact that the locker room stubbornly remains the last closet, it matters. Just this week former NBA player Amar’e Stoudamire— now playing in Israel—said about the thought of having a gay teammate, “’I’m going to shower across the street.”

Stoudamire represents the past. The My-King Johnson story is the future.

As Johnson said, “I’m a very honest person. I just don’t see how I could be living an honest, truthful life and have [my sexuality] in the background.”

His teammates, many who have been playing with him since middle school, greeted the news with a shrug. It reminded me of something Cyd Zeigler, founder of Out Sports and author of Fair Play: How LGBT Athletes Are Claiming Their Rightful Place in Sports, said to me when Jason Collins of the Brooklyn Nets became the first openly gay player in professional men’s sports in 2013. He said, “This issue is evolution, not revolution. We don’t just have to wait for current professional players to come out. Look for high-school sports stars who never had to come out because they were never ‘in.’ They are the ones who will show us just how far sports have come.”

I recalled that quote to Cyd and asked him about My-King Johnson. He said, “We keep hearing over and over about the power of homophobia in sports…. Yet the stories that so many young black athletes like My-King tell revolve around love and acceptance. No doubt there are still issues, but communities once dominated by homophobia have shifted so dramatically in the last decade. People outside these communities don’t understand just how much they have transformed.”

An interview with My-King’s mother Nadette Lewis for The Arizona Republic about his coming-out story demonstrates this. He just told his mother matter-of-factly at age 12 on the way to the grocery store that he was gay. His mother recalled her response: She said, “’I love you for who you are as a person.’ Sexuality? It doesn’t matter. That’s how I teach my children. Love who you are no matter what you are, or what you look like. You have to love yourself. If you love yourself first, then everybody else will respect that and have no choice but to love you.”

It is telling that the questions I have heard about this story from people in the sports world have been less about My-King’s sexuality than about the origins of his name. The answer is as simple as the name of one of My-King’s sisters: It is “A-Queen.” Nadette Lewis was never going to let racism or poverty make her children feel like they were anything less than excellent.

I asked another trailblazer, tennis legend Martina Navratilova for her thoughts about My-King Johnson’s emergence. “Each coming out helps push the needle when one day it won’t be even newsworthy,” she responded. Amen.