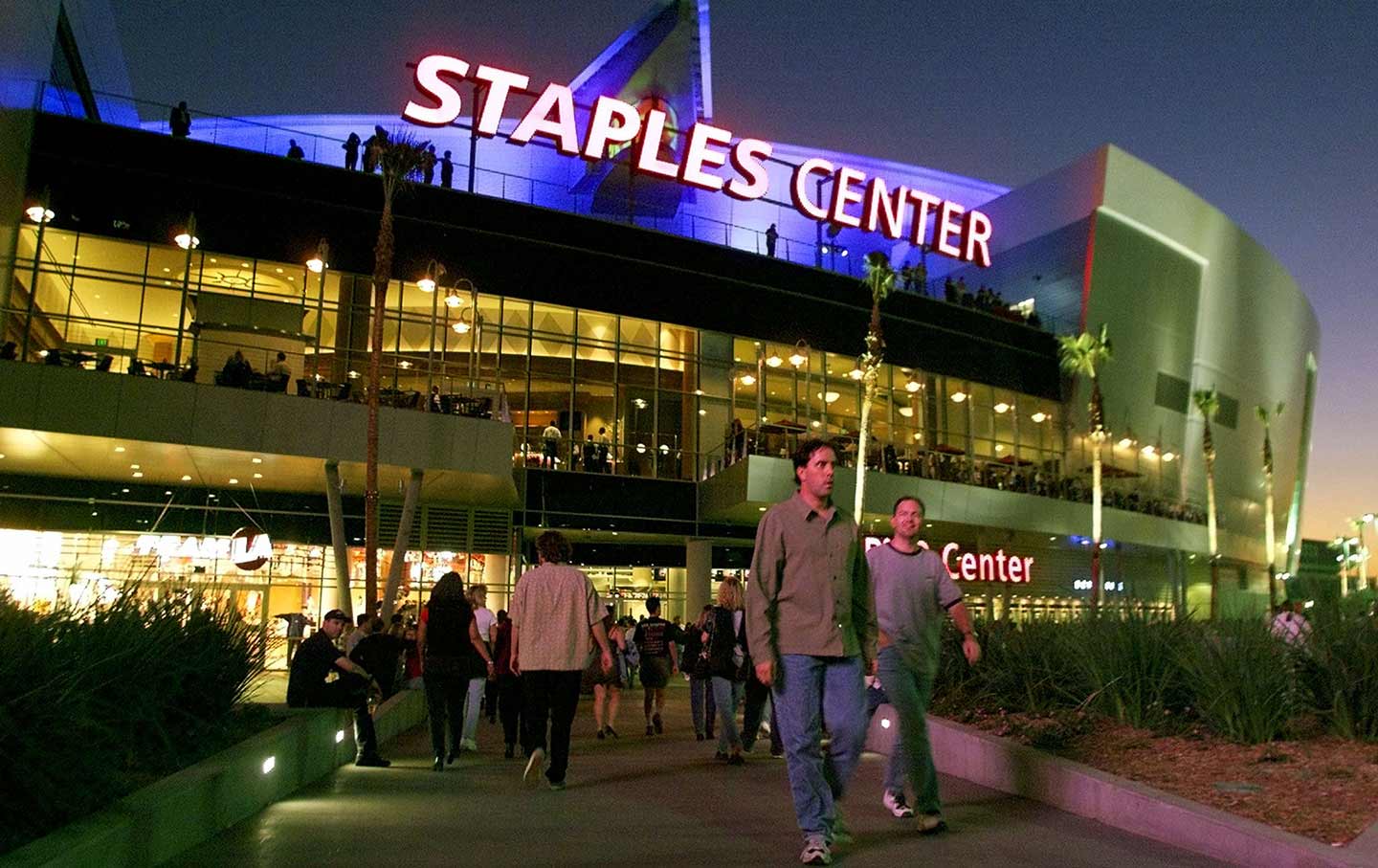 Fans stroll outside the Staples Center in Downtown Los Angeles, right after its opening in October 1999. (Reuters / Sam Mircovich)

Twenty years ago this month, Staples Center opened to the public in Downtown Los Angeles, marking the dawn of a new era of sports-driven displacement and gentrification.

In the past week, the mainstream LA press corps has already delivered its uncritical remembrances of memorable moments in the stadium’s past. Who could forget such iconic events as the 2000 Democratic National Convention, or when Garth Brooks once played a benefit, or when occasional mayor Eric Garcetti dropped the F-bomb on TV? But there’s yet to be an honest review of what Staples means to the people displaced by its construction in the late ’90s, or how its tax-dollar-subsidized development set off a wildfire of gentrification across Downtown LA. The construction of Staples Center helped to create the city’s current dystopia, where wealthy landowners and investors earn enormous profits from soaring land values, while nearly 60,000 people sleep on the street and 600,000 more spend at least 90 percent of their income on rent.

When Staples Center opened in the South Park neighborhood in October 1999, it was touted as “LA’s Newest Palace.” The sports complex represented a city desperate to give itself a makeover after a series of events that revealed its deep inequities: the ’92 uprising after the beating of Rodney King, the ’94 earthquake, and the O.J. Simpson legal disaster. So desperate were LA’s elected officials that they handed over $70 million in public money to Staples, and another $270 million to the adjoining LA Live development—featuring the Microsoft Theater, Xbox Plaza, and mediocre chain restaurants such as the Wolfgang Puck Bar & Grill—a few years later. (Both Staples Center and LA Live are run by the company AEG, which is owned by Philip Anschutz—a billionaire Republican donor once dubbed “the man who owns LA” by The New Yorker.) Attempts to remake this section of Downtown LA had begun in earnest in the late 1980s, but the boom really took off with the construction of Staples Center. As one business advocate gushed on the occasion of its 10th anniversary, “I like to refer to [the construction of Staples] now as the BC and AD of downtown’s revitalization.” 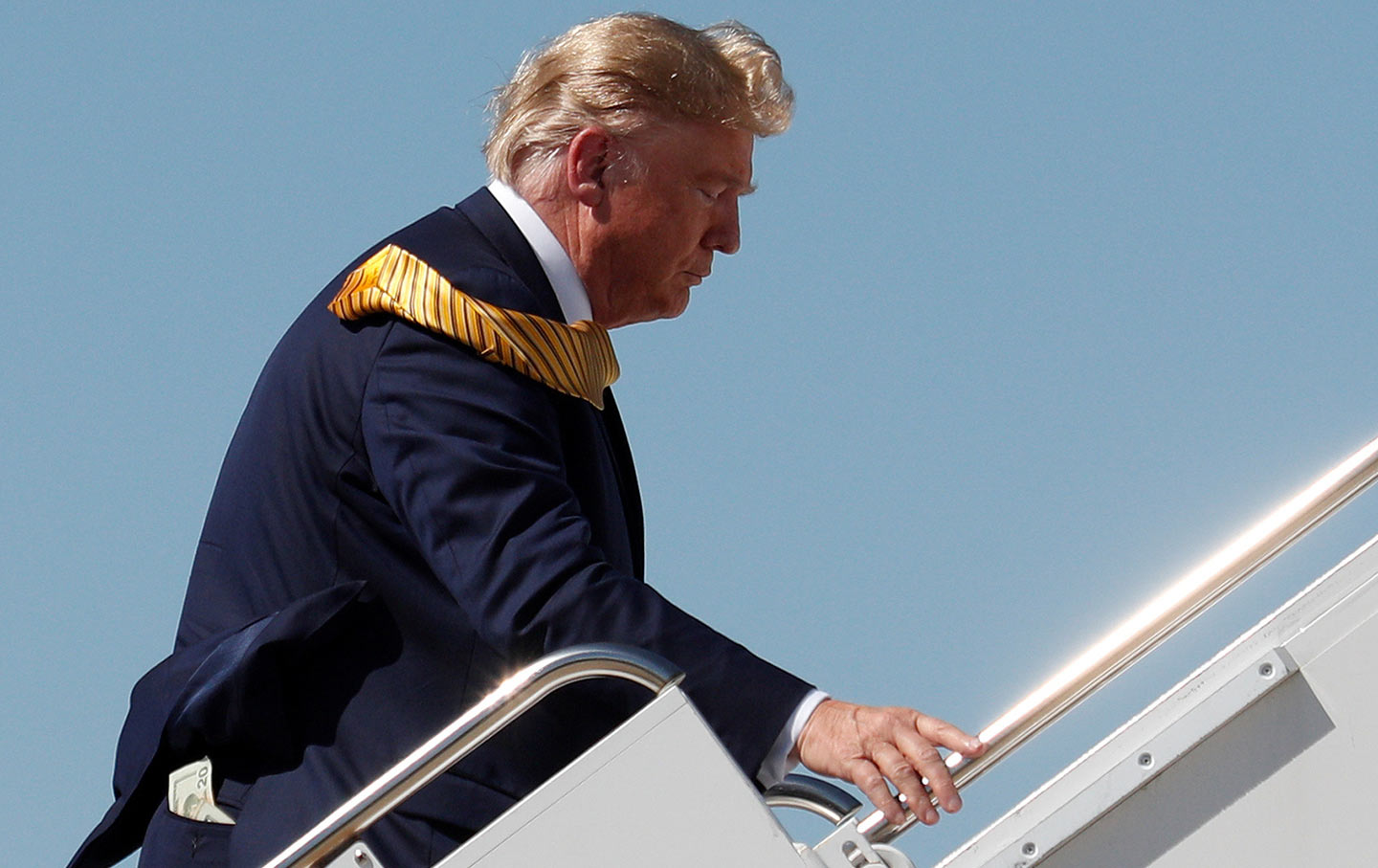 What’s almost never mentioned in this contrived Cinderella story is how the construction of the stadium involved the deliberate destruction of a low-income, predominantly Latinx community. More than 250 residents were displaced by the project in the late ’90s, some of them receiving as little as $2,000 to aid in relocation. The average assistance package for these families was around $9,300. (A tenant advocate said at the time that the average package, in other parts of the city, was at least $15,000.) It didn’t help that many media outlets were quick to depict the pre-Staples area as seedy, poor, and in desperate need of saving. In 1998, the Los Angeles Times called the South Park area “a predominantly sleepy and often seedy neighborhood.” This characterization stuck for decades.

“We used to look down on the site from the 27th floor of the TCW building, just as we were starting to dig the hole and condemn some of the buildings,” Staples Center president Lee Zeidman told The Hollywood Reporter in 2009. “There were dilapidated buildings in various states of decay, different types of liquor stores on the corners. They were basically drug and prostitute hangouts.” In 2018, the LA Times remembered South Park pre-Staples as “an unwelcoming expanse of parking lots interspersed with small, run-down apartment buildings and shabby storefronts.”

Stadiums—and the developers and politicians who love them—have been displacing the poor and working class for ages. But the scale and intensity of these projects have escalated tremendously since the ’90s. The Staples Center playbook—in which boatloads of public money, and sometimes public land, are given to arenas or stadiums that end up drastically changing the character of a neighborhood—has become canon for American cities in the neoliberal era. One of the earliest examples took place right here in Los Angeles in the 1950s, with the violent evictions of the largely immigrant community of Chavez Ravine. The land had been acquired from residents through both public pressure and eminent domain, ostensibly so it could host thousands of units of public housing; evicted residents were told they’d be able to return to the new buildings. That is, until an aggressive, red-baiting campaign by the real estate industry killed the plan, and it was turned over to the owner of the Dodgers in 1957. By 1959, ground had been broken for what would soon be the site of Dodger Stadium.

Now this tactic is commonplace: From Nationals Park in Washington, DC (completed in 2008, and current host of the World Series), to Barclays Center in Brooklyn (completed 2012), these projects often directly displace small businesses and residents, many of whom are not fairly compensated. Most painfully, these taxpayers are often helping to fund their own eviction: In 2017, ESPN reported that an estimated $6.7 billion of public money went toward the building of 24 NFL stadiums in the previous two decades.

One of the most egregious examples of American sportswashing happened in Atlanta, in connection with the 1996 Summer Olympics. As MIT professor Lawrence Vale and urban planner Annemarie Gray write, private- and public-sector players leveraged the Atlanta Olympics to displace the overwhelmingly poor and black community at Techwood Homes, the nation’s oldest public housing project. Families were offered housing vouchers by the city in exchange for leaving their homes, theoretically enabling them to rent elsewhere—but many tenants were skeptical of the prospects of finding decent housing in the private market, where requirements to rent were more stringent. Nonetheless, by 1996, all of the residents had been displaced, and 10,000 Olympic athletes were able to be housed in new buildings on that site.

After the Olympics were over, the vast majority of the Techwood families were unable to return to their former community: by 2000, when the mixed-income replacement development was completed and fully rented, just 78 of the more than 1,000 displaced families who had lived in Techwood were rehoused in the new buildings. The Atlanta Housing Authority’s CEO later acknowledged the connection between the Olympics and the displacement, but stated bluntly that “something had to be done.”

When Staples Center opened in 1999, it received an abundance of PR assistance from local media outlets. The LA Times infamously dedicated an issue of its magazine to the wonders of this new stadium; it was later exposed as a profit-sharing deal between the Times’ publisher and Staples’ developers, to the outrage of many. (The publisher apologized and was ousted soon after.) Nevertheless, the damage had been done. In 2001 a Staples “Community Benefits Agreement” cleverly guaranteed an end to local resistance by providing concessions to the community in the form of local hiring goals and funds for parks and “affordable” housing—a small price to pay in exchange for millions in public funds.

Staples Center was massively successful as the first major strike in LA’s new era of urban redevelopment. “You’re going to have a billion dollars of investment in the area around the project,” Steve Soboroff, a local oligarch, has claimed he said at the time—and in the mid ’00s, the LA Live area was built. “Times Square West” (as one AEG exec nicknamed it) is a brand-activation zone of chain restaurants, luxury hotels, and heavily surveilled entertainment. The City provided AEG with up to $270 million in tax breaks over the next three decades to subsidize the hotel portion of the project; since the mid-aughts, the City has given hundreds of millions more taxpayer dollars to hotels and conference centers in the immediate area. And it got results: J.W. Marriott and Ritz-Carlton Hotels were added to LA Live by 2010; in 2014, an Ace Hotel—a chain that’s become a symptom, if not an agent, of aggressive gentrification across the country—opened in South Park.

The only mega development they weren’t able to greenlight in the area was an NFL stadium; a years-long effort to develop one in South Park failed in 2015. That campaign eventually gave way to the massive SoFi football stadium in Inglewood, which will also be leveraged for the 2028 Olympics and is helping to rapidly displace residents from one of LA’s last black working-class enclaves. Not only that, but the existence of Staples Center continues to spur other construction in South Park, from the disastrous Oceanwide Plaza to a proposed semi-residential mall called the “Olympic Tower.” Lawrence Vale calls the Olympics the “Displacement Decathlon,” as approximately 2 million residents have been uprooted thanks to Games-driven development over the last three decades. And the same promises to happen in Los Angeles.

LA’s elected officials spend decades cultivating deals like Staples Center and the Olympics bid, creating a city where property values and rents keep rising higher and higher, then claim to be “stunned” when more and more people end up on the street. The “revitalization” of Downtown LA has only succeeded in rebranding the inner city as a luxury tourist destination—a utopian entertainment paradise far removed from reality, in which LA’s hyper-militarized police force murders more of its own residents than almost any other force in the nation and feeds what MacArthur genius grant recipient Kelly Lytle Hernández has called “one of the largest systems of human caging that the world has ever known.” (It should surprise no one that Steve Soboroff—one of the bigwigs spearheading the Staples Center project back in the ’90s—is now LA’s police commissioner.)

In a recent article celebrating the arena as “crucial for downtown’s resurgence,” and calling South Park “one of the city’s most vibrant [neighborhoods],” the LA Times quoted Soboroff: “What Staples and LA Live have done for downtown Los Angeles is epic.” Epic for whom?

Since its construction, Staples Center has hosted pro sports franchises and big-headliner concerts. But the stadium—like all sports mega-structures—spends a lot of its time sitting empty. The building and LA Live are a perfect encapsulation of what Downtown LA has become in the 21st century: clean, hyper-policed, and unapologetically hollow.