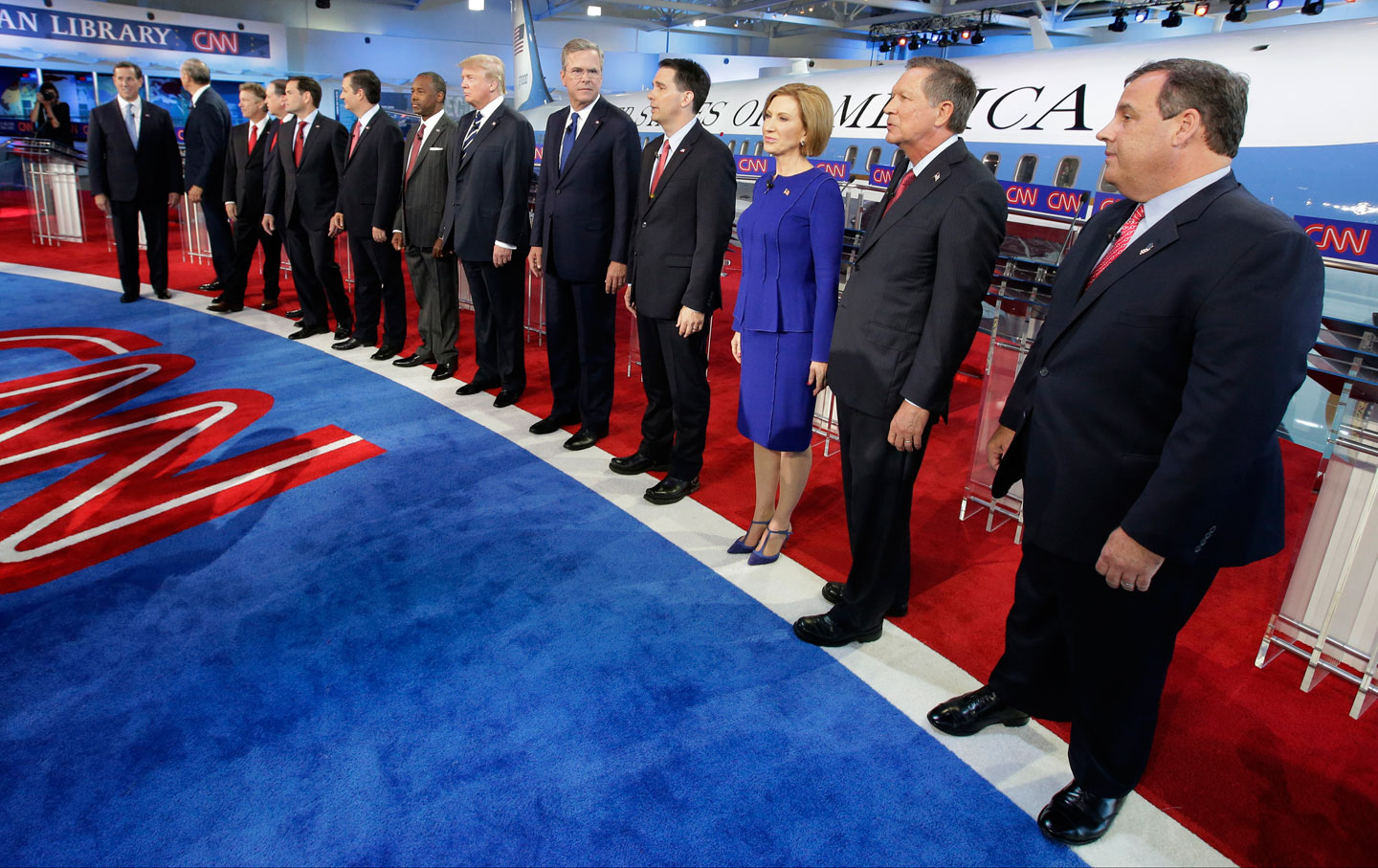 Luckily for the GOP, most people had probably tuned out by the time last night’s interminable Republican debate hit the two hour and 50-minute mark, when it reached peak craziness. That was when Donald Trump repeated his claim that childhood vaccines cause autism, invoking an employee’s child who “went to have the vaccine and came back and a week later got a tremendous fever, got very, very sick, now is autistic.”

This would have been a good time for someone on the stage to stand up for reality, on an issue where they could count on some degree of conservative support.

After all, in a recent poll, 57 percent of self-described conservatives said that kids whose parents refuse vaccination shouldn’t be allowed to attend public school. One would think there would be ideological space for someone to whack Trump for parroting left-leaning B-list entertainers like Jenny McCarthy. Instead, the exchange left viewers with the sense that everyone on stage thought Trump had a point.

Ben Carson, a pediatric neurosurgeon, pointed out that no study has ever linked vaccines and autism, but he did so in such a diffident way that he appeared to be confirming Trump rather than contradicting him. At one point he said, vaguely, “It has not been adequately revealed to the public what has been going on,” adding, “a lot of this has been pushed by big government.” Later, he added, “It is true that we are probably giving way too many [vaccines] in too short a time.”

When Rand Paul, also a doctor, chimed in, he said, “I’m all for vaccines, but I’m also for freedom. I’m also a little concerned about how they’re bunched up.” No one stood up for the overwhelming public-health consensus on vaccines, or used the opportunity to point out that Trump is an ignoramus spouting dangerous conspiracy theories.

Carly Fiorina couldn’t have done it, since she’s terrible on vaccines herself. (She’s said vaccinations should be up to parents, and that some are given for diseases that are “not communicable” and “not contagious,” statements that are both untrue and nonsensical.) But Bush or Kasich might have given it a shot. It would have been a good opportunity for Chris Christie, who came out for vaccines earlier this year, after garnering negative press for wavering. Instead, all made a quiet calculation, which may have been correct, that you can’t win a Republican primary by being on the side of science, reason and the public good.

After the three-hour ordeal of the debate was over, many speculated that the Trump phenomenon might finally be beginning its dénouement. He was clearly thrown by Fiorina, who, in response to his insults about her looks in Rolling Stone, said, with perfect, icy contempt, “I think women all over this country heard very clearly what Mr. Trump said.” As the night dragged on, his face grew increasingly red and splotchy, and by the time the event limped to a conclusion, he appeared exhausted, deflated, and a little confused.

There’s no way to predict whether this will be a definitive turning point. Pundits thought that Trump was done after he besmirched John McCain’s status as a war hero. They thought he was over when, on Hugh Hewitt’s radio show, he mixed up Iran’s Quds Force and the Kurds, and admitted he wasn’t familiar with major Middle Eastern figures like Hezbollah Secretary General Hassan Nasrallah and Al Quaeda leader Ayman al-Zawahiri.

What is clear, however, is that even if Trump goes away, the Republican Party isn’t climbing out of the fever swamps anytime soon. There were two figures on stage who made occasional gestures towards rationality. Rand Paul criticized militarism and the war on drugs. John Kasich came out against shutting down the government over Planned Parenthood, and insisted that it’s not realistic to promise to tear up the Iran nuclear agreement on day one of a new administration. In a CNN poll taken shortly before the debate, their combined support was 5 percent. Nothing that happened last night seems likely to change that.