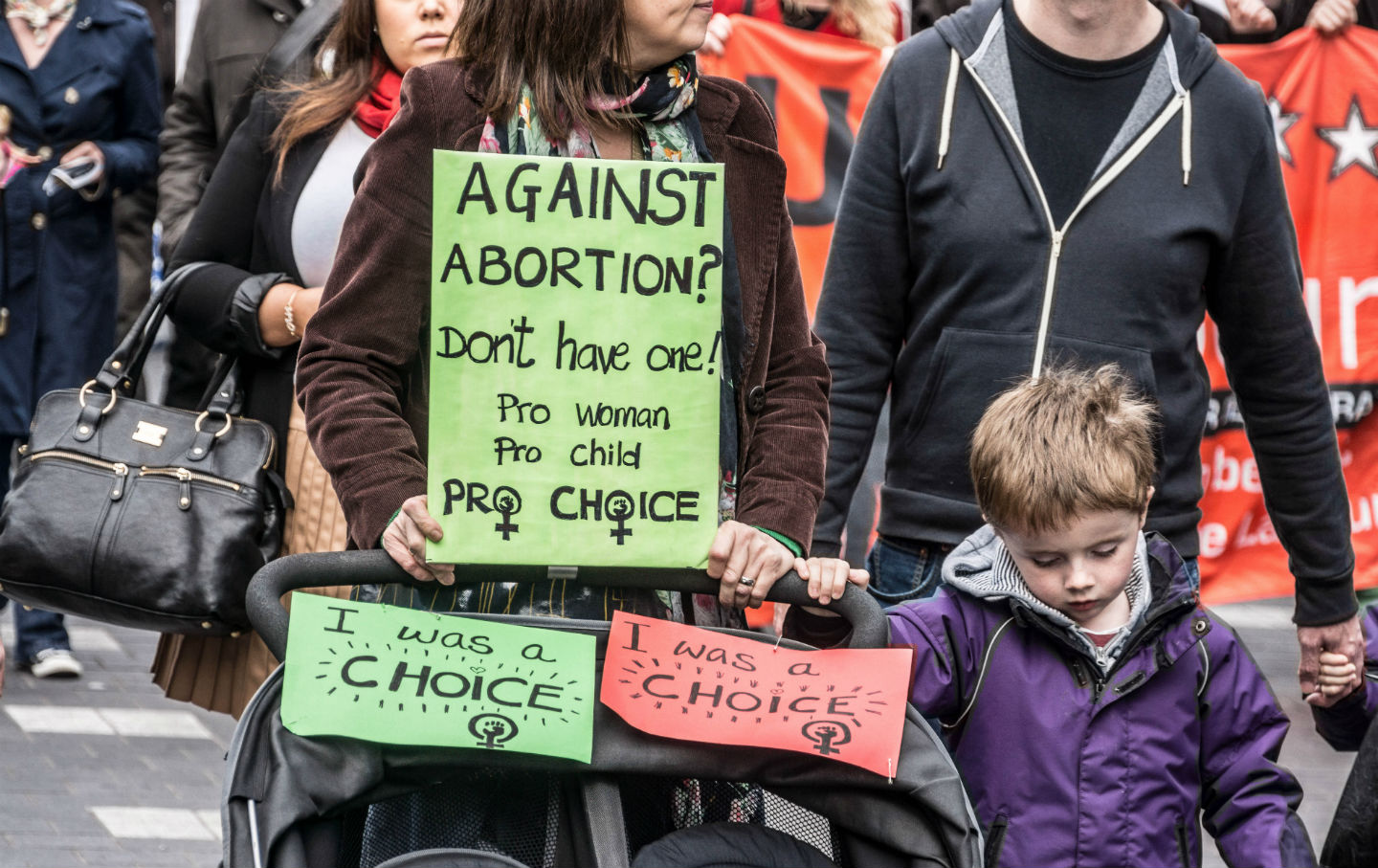 Last week in Dublin I was part of an event, “Too Loud a Silence: Abortion and Censorship in Irish Media,” organized by an Irish activist group, the Abortion Rights Campaign, at the Teachers’ Club in Parnell Square. The room was packed with women, young and not-so-young, which is something you don’t always see at an American pro-choice event. I read from my no-longer-quite-so-new book, Pro: Reclaiming Abortion Rights, and a splendid panel—social policy researcher Goretti Horgan, journalist Carol Hunt and activist Angela Coraccio—dissected the sorry state of reproductive rights in Ireland now, where abortion is banned except, theoretically, when the woman would die or commit suicide (we have the horrific death of Savita Halappanavar in 2013 to thank for the Protection of Life During Pregnancy Act, which provides that extremely narrow exemption). Penalty for taking an abortion pill like those bought on the Internet by women all over the world? Up to fourteen years in prison.

The best part, though, was the comments from the floor. (As with every reproductive-rights event I’ve attended in my whole long life, only a sprinkling of men were present, something to think about next time someone proposes men “get a say” in what goes on in a woman’s womb.) Woman after woman rose to express, with all the famous eloquence of the Irish, her hot indignation about the treatment of herself and other women, especially mothers. “When you have a child with special needs, the first lesson you learn in this country is you’re on your bloody own,” said one mother of a disabled child. Catholic schools “won’t have a policy to not admit your child, but they’ll let you know…that you’d be better going on up the road.” You would think Ireland would reward single mothers for doing the right thing, since it is so keen to force the pregnant women to give birth, but no. The government is much the same as a callous boyfriend who drops you once the baby’s born. “Single mothers are on. their. own!” shouted one woman, to a ripple of agreement from the crowd. Another told of a friend with a small son and a baby with special needs who was placed in filthy housing—a room over a pub overrun with drug addicts. “When they walked in, her 6-year-old said, ‘Mommy, this isn’t suitable for Josh’—the child with special needs. And this is happening by the same people who are limiting our reproductive rights.”

The evening reminded me of a claim made by Ross Douthat and some other anti-abortion social conservatives when Texas was passing a serious round of restrictions in 2013, that restricting abortion need not hold back women’s advancement, and that Ireland was a good example of that. I challenged Douthat on that at the time. Yes, Ireland is a modern European welfare state, although a meager one compared to some others, but it’s also still strongly patriarchal: only 15 percent of members of the Dáil, Ireland’s Parliament, are female; women are less likely to work outside the home than in comparable nations, and—despite the fact that, as in most of the developed world, women are better educated than men—they earn far less, and rarely reach the top of their field. (On the plus side, Ireland has had two women presidents, while we’re still working on our first one.) There’s plenty of violence against women, and plenty of poverty among single mothers. Affordable childcare? Vanishingly hard to find, which is one reason for those low female-employment figures. (Forty-two percent of children are being cared for by grandparents, prompting Irish Times columnist Anthea McTeirnan to ask, “Should grandmothers be minding the kids or running the world?”) No wonder the birth rate is declining and women are increasingly postponing childbearing: the age at first birth is now 32, one of the latest in the EU.

Behind whatever Irish women have achieved lies that loud silence that gave the ARC event its title: the rarely acknowledged but common practice of traveling to England or elsewhere in Europe to obtain a legal procedure, and underground access to abortion pills. Abortion gets the spotlight only rarely, when there’s an atrocity that makes headlines. (True story: a morning talk-show producer interviewed me to be a guest, put me on hold, and came back with regrets. “We’re a light, human interest show,” he said. “You could say we’re a women’s interest show…but of course abortion is a women’s interest…” he trailed off. Yes, indeed. Maybe I said “patriarchy” once too often, that is, once.) The most recent outrage is the case of Ms. Y, an 18-year-old immigrant who had reportedly been raped in her home country, and tried to get a legal termination in Ireland from the time she was 8 weeks pregnant, on the grounds that she was suicidal, which should be permitted by the new law. She was stalled by the bureaucracy, when she went on a hunger strike, officials obtained a High Court order to feed and rehydrate her; in August, at about twenty-six weeks, she was given a Caesarean and the state took the baby into care; its fate, so far, is unknown. (Anti-choicers claim fetuses are viable at twenty weeks, but in real life the chances that such a premature baby will survive, and survive without significant medical issues, are not good.)

Is it the flagrant contempt for women inherent in Irish abortion law that gave the discussion at Too Loud a Silence its edge? I left the event feeling out of step with contemporary US feminism—the Irish women reminded me of meetings and speakouts over here in the 1970s, those hotbeds of grassroots activism. Maybe women’s activism looks different—grittier, more grounded, more practical, more direct—when the injustice is more obvious and the enemy is in plain sight, when it says right there in the constitution that the life of the woman and the life of the “unborn” are equal, and you have to walk around every day knowing that your country sees you as a vessel. As for women’s rights, just read the constitution: “In particular, the State recognises that by her life within the home, woman gives to the State a support without which the common good cannot be achieved. The State shall, therefore, endeavour to ensure that mothers shall not be obliged by economic necessity to engage in labour to the neglect of their duties in the home.” When your country’s constitution equates “woman” with “mothers” and suggests that mothers belong at home, discharging their “duties,” it’s hard to maintain, as so many American women do, that you’re equal, even in formal legal terms. American women may have it better on paper, but we certainly have a lot to complain about—justifiably—yet I haven’t been at a meeting of a lot of smart, furious ordinary women speaking their minds about life as they lived it for a long time. I miss that: no academic jargon, no trigger warnings, no apologies for using words like “woman” and “mother.”

What ever happened to that? It used to be what feminism was all about.

The Abortion Support Network raises money to help women travel from Ireland and Northern Ireland to get safe, legal abortion care in England. For low-income women, the cost of the procedure, travel, plus time off work with childcare thrown in can be prohibitive. In 2015, ASN estimates 700 women will contact the group for help—that’s a lot of people. Every dollar you give will make a crucial difference to one of them. Please be generous and donate at https://www.abortionsupport.org.uk.