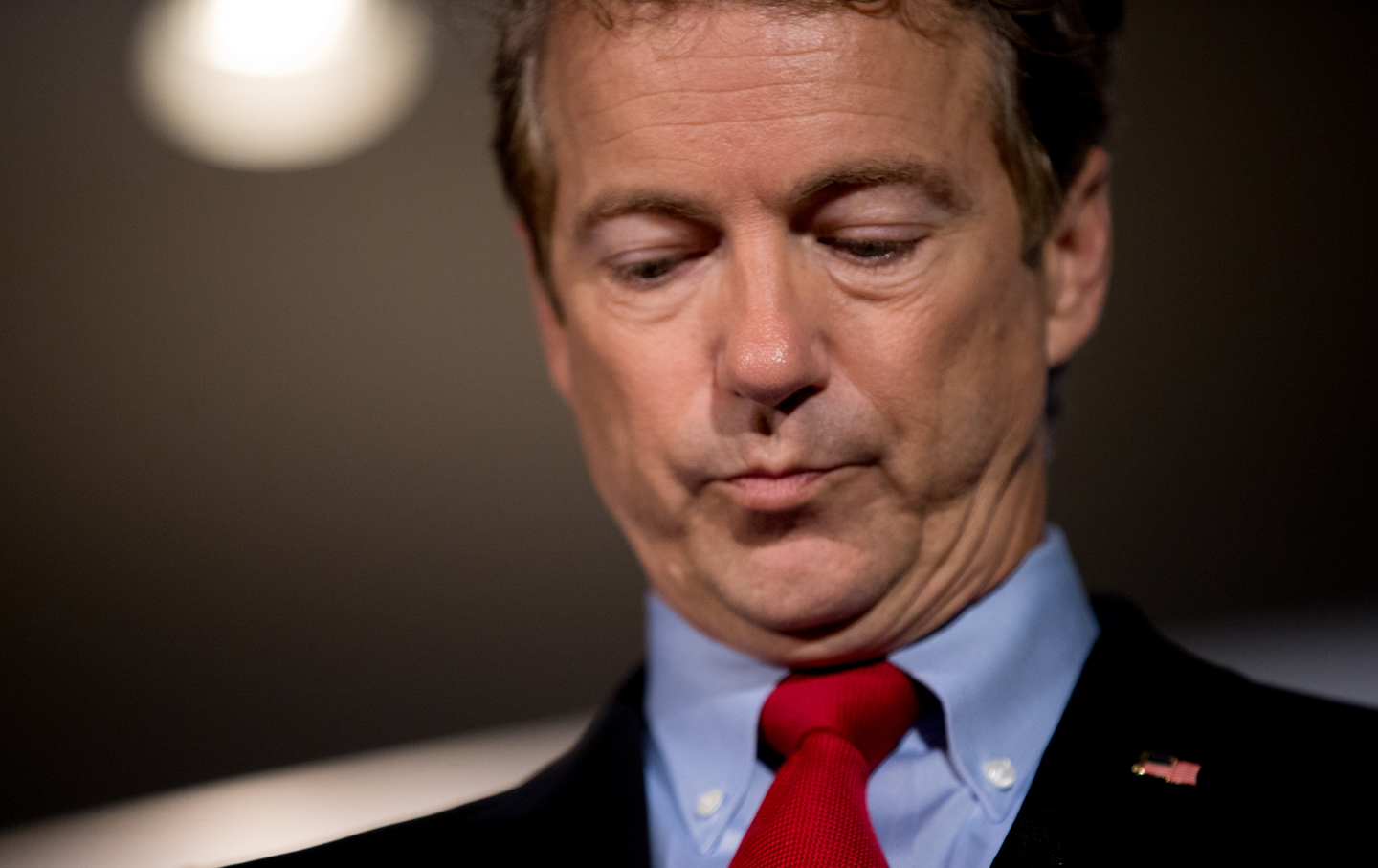 Senator Rand Paul is invested in a fund that would skyrocket in value if the United States economy were to default. He’d also like your vote for president.

According to personal financial disclosure forms, as of November 14, 2014, the Kentucky senator had between $1,001 and $15,000 invested in ProFunds’ Rising Rates Opportunity Fund Investor Class, or RRPIX for short. According to the fund’s website, RRPIX allows investors to “seek potential profits from Treasury price declines when interest rates increase.”

In other words, if the value of Treasury bonds were to drastically decrease, owners of RRPIX could reap significant profits. This maneuver of essentially betting against the US economy is known as “shorting T-bills.”

In most cases this is a relatively banal investment, designed to hedge some risk in the event of economic turmoil. But one thing complicates Paul’s investment: his leading role in efforts to not raise the debt ceiling. A default would cause his holdings to skyrocket; even the threat of default has the potential to roil markets and boost Paul’s RRPIX investment.

Prior to 2011, Congress had always increased the ceiling when the national debt approached the limit, rarely demanding legislative concessions in return. After all, holding the United States economy hostage is a high-risk venture; if an agreement isn’t reached, the resulting default would, according to fellow GOP presidential contender Senator Lindsey Graham, result in “financial collapse and calamity throughout the world.”

But after Tea Party–aligned Republicans like Paul entered Congress in 2011, they didn’t see holding the debt ceiling hostage as a risk but rather an opportunity. When the debt approached the national limit that year, Paul was among the GOP leaders advocating that Congress only raise the debt ceiling if the raise came attached to a balanced budget amendment. Assuming Congress didn’t raise taxes, which Paul opposes, a balanced budget amendment would have resulted in 44 percent cuts to every government program, from Social Security and Medicare to highways and national defense.

After the GOP ultimately agreed to raise the debt ceiling without securing such draconian cuts, Paul was furious. He lambasted House Republicans for having “retreated” after they passed a short-term debt ceiling extension in 2013. When the matter came up again later that year, Paul dabbled in debt ceiling trutherism, insisting that United States wouldn’t actually default if the debt limit were breached. He instead accused President Obama of trying “to scare people” about the economic impacts of a default.

In 2013, Paul again made the same demand. “I will not vote to raise the debt ceiling unless we get a balanced budget amendment to the Constitution,” he declared on Facebook.

During both showdowns, Paul never publicly discussed his own financial conflict of interest, and his interest in the debt ceiling was likely much more ideological and political than it was a gambit to boost his portfolio.

But senators have to file financial disclosure forms so the public can fully judge their public versus personal motivations in broad daylight: and quite interestingly, Paul hid these holdings during the debt ceiling crisis.

The 2013 debt ceiling showdown began in earnest on May 19, when the country technically hit the debt ceiling, but the Treasury implemented extraordinary measures to stave off a default. The standoff dragged on for months, ultimately coming to a head on October 17 when Congress raised the debt ceiling just before the Treasury had exhausted its emergency funds.

But when Paul filed his personal financial disclosure in the midst of the crisis, on August 13, his RRPIX holding was not listed among his assets. Anyone examining Paul’s finances in August 2013, therefore, might have assumed that Paul had sold off his RRPIX investment, since it had appeared on his previous annual disclosure.

Four months after Congress raised the debt ceiling, however, Paul filed an amendment to his annual report indicating holdings that had been left off his August filing. Among those holdings, on page five: an investment of between $1,001 and $15,000 in RRPIX.

Omitting RRPIX from his personal financial disclosure during the height of the debt ceiling crisis certainly may have been an oversight, but it was also a convenient one. Some other prominent Republican officials endured widespread criticism after getting caught shorting T-bills, including former House Majority Leader Eric Cantor and 2012 Ohio GOP Senate nominee Josh Mandel.

According to Paul’s most recent disclosure in August 2014, he still owns between $1,001 and $15,000 of RRPIX. His position on the debt ceiling also has not shifted. The day after announcing his presidential candidacy, Paul appeared on Fox News to reiterate that he still opposes raising the debt ceiling, consequences be damned. “To raise the debt ceiling, what I’ve always said is, let’s don’t raise it until we do entitlement reform,” he told host Sean Hannity. “Let’s just hold firm.”

Paul’s Senate office referred inquiries to his presidential campaign, which did not return a request for comment.