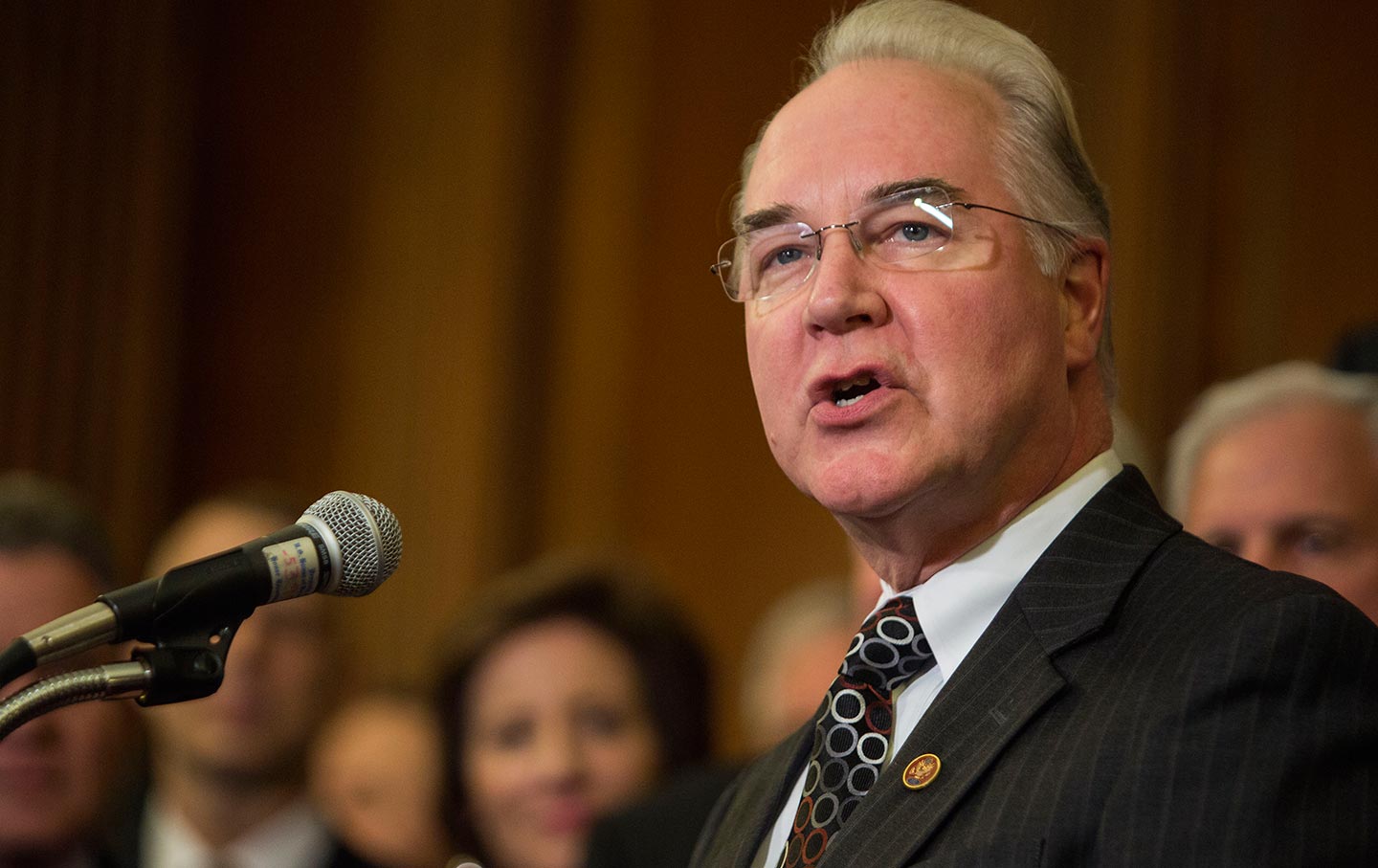 For those who thought Donald Trump, someone who spent two years on the campaign trail promising to protect programs like Medicare, might consider keeping that promise, let today’s news disabuse you of that notion. The selection of Georgia Congressman Tom Price as Health and Human Services Secretary offers the clearest signal yet that Trump and House Speaker Paul Ryan are perfectly aligned, and ready to make Medicare phase-out the signature proposal of his presidency.

There’s not much daylight between Ryan’s and Price’s plans for the nation’s health system. Both want to repeal Obamacare; in fact, Price has issued a detailed replacement plan every year since 2009, before the ACA even passed. Price’s Empowering Patients First Act contains the usual features of conservative health-care plans—poorly funded high-risk pools for anyone rejected for a preexisting condition, letting insurers sell across state lines, health savings accounts, tort reform, and capping the tax exclusion for employer health coverage. Practically all of these ideas have been implemented either at the state level or during George W. Bush’s administration, and none succeeded in closing the uninsured gap or making health care cheaper. But Price’s major provision replaces the ACA with a meager tax credit to purchase private insurance on the individual market. It also allows people to opt out of Medicare or Medicaid and take the tax credit.

If that sounds familiar, it’s substantially the framework of Ryan’s premium-support plan to convert Medicare into a coupon for people to put toward insurance. Price has endorsed the Ryan plan: Earlier this month he said Congress would phase out Medicare in the first six to eight months of 2017. He even laid out how to get it done while avoiding the filibuster. Using budget reconciliation, fiscal items that don’t increase the deficit outside the 10-year budget window can get an up-or-down vote with limited debate.

Price succeeded Ryan as House Budget Committee chair, so he understands the mechanics of the process. And he would have to do something fast, because a full Obamacare repeal, including the Medicare provisions, would immediately reverse the ACA’s extension of the Medicare trust fund, triggering an inability to pay all benefits within the first year or two. So Price and Ryan would create an unnecessary crisis in Medicare to get to their favored solution of voucherizing it.

For good measure, Price’s last budget not only repealed Obamacare but turned Medicaid into a block-grant program for the states.

This is about much more than the Rube Goldberg–system of the ACA. Price’s ambitious blueprint would roll back two of America’s biggest social-insurance programs. Prior to Congress, he was an orthopedic surgeon, the kind of high-priced service provider that stands to lose from a universal system that wrings costs out of specialist fees. He has no interest in social insurance, and his top priority at HHS will be to cripple anything resembling it. And to sell Trump on the whole shebang.

The president-elect mostly stayed out of this debate during the campaign. “Abolishing Medicare, I don’t think you’ll get away with that one,” he told MSNBC last October. “It’s actually a program that’s worked. It’s a program that some people love, actually.”

But the Price pick should leave no doubt: Donald Trump is coming for your Medicare. This is not a drill. His allies in the cabinet and on Capitol Hill mean to roll back the Great Society. They have been meticulously laying out the plan for close to a decade. None of Trump’s statements over the past year mean as much as installing Tom Price at HHS.

Liberals need to dispense with the idea that there’s one Trump, that he’ll either be singularly captured by the conservative policy establishment or singularly committed to an idiosyncratic nationalist populism. There’s ample room for him to pick and choose. Trump may adhere to his promises on immigration and trade—though calling for the repeal of fast track would prove it—and also destroy universal health-care programs. Consistency is not really his strong suit. Besides, he can simply convince himself that he’s giving people something classier and better than what they already have. Trump contains multitudes.

Anyway, Trump may actually need to gut Medicare and Medicaid if he wants conservatives to move forward on his other priorities. Trump’s advocacy for budget-busting tax cuts and Keynesian spending (though his infrastructure plan isn’t as pricey as advertised) has angered fiscal conservatives. There simply aren’t many ways to make up the difference, especially since Trump wants to increase defense spending. The federal government has been described as an insurance company with an army. The army’s staying, so to satisfy the bean-counters, Trump will have to toss out the insurance company.

So what can liberals do in response? Using reconciliation means that Republicans can accomplish this entirely on their own. The only question is whether Democrats will make the idea so toxic that they threaten the job security of anyone in Washington who goes along with it. Republicans have a 24-seat cushion in the House, but could only afford to lose two senators to phase out Medicare (I’ve questioned in the past whether Senate Republicans actually want to make these kinds of big changes). Every senior in every district in America should be aware of the GOP plan to destroy a health-care guarantee that has lasted for generations. And if Republicans pull the cowardly move of protecting those already on Medicare or close to eligibility, that should be ridiculed for the bait and switch that it is.

Democrats can take up the fight immediately, in the special elections that will arise as Trump fills out his cabinet. CIA director nominee Mike Pompeo’s seat in Kansas and Price’s in Georgia are pretty red, but seniors typically represent the largest voting bloc in these low-turnout races. In 2011, the last time Ryan made a serious push to privatize Medicare, Kathy Hochul won a right-leaning seat in upstate New York by making the race entirely about social insurance. This can be replicated, proving the concept that trying to dismantle programs Americans have paid in to their entire working lives is political suicide.

So far Democrats have mostly said the right things. Chuck Schumer defiantly asked Republicans to “make my day” by trying to take away Medicare from seniors. Even red-state Democratic senators up for re-election in 2018 aren’t budging. But being united is one thing; making this issue synonymous with Republicans and Trump for the next several years is quite another. Distractions must be pushed to the side. This is a very real assault on one of the signature pillars of the 20th-century liberal project. It’s time to organize.