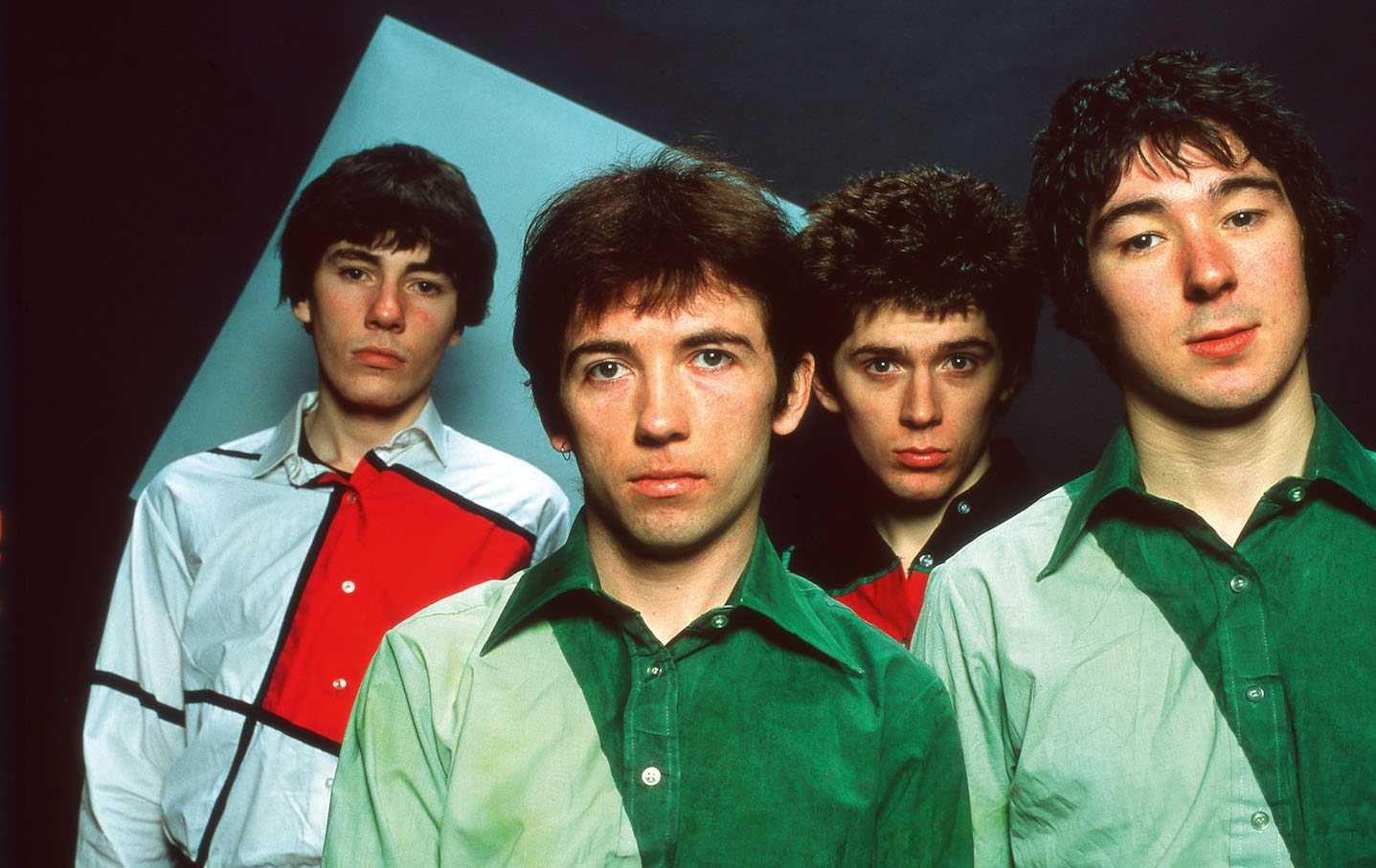 In the wake of their self-released 1977 debut EP, Spiral Scratch, the Manchester punk band Buzzcocks received mounting adulation. By the summer of that year, they’d been featured on John Peel’s BBC radio show, in prominent British music magazines like New Musical Express and Sounds, and on concert bills with acts ranging from the increasingly famous Clash to emerging punk groups like X-Ray Spex. In August, like the Clash and the Sex Pistols before them, Buzzcocks signed with a major label (United Artists) and began to prepare the first of two full-length albums they would release in 1978, Another Music in a Different Kitchen and Love Bites, both of which were just reissued on their 40th anniversary.

But by the time Another Music came out in March 1978, Buzzcocks had a slight problem: According to many in the UK underground, punk was already dead. Founding Buzzcocks vocalist Howard Devoto had foreseen the demise, quitting the band not long after Spiral Scratch’s release. “Suddenly [punk] was everywhere,” he said. “If I felt it had been going somewhere, I probably would have thought somewhat differently about the whole thing.” So Devoto formed Magazine, a post-punk group that ditched Buzzcocks’ three-chord comfort zone for a more varied sonic that summoned up the sounds of dub music and David Bowie’s Berlin albums. In January 1978, in a similar move, John Lydon left the Sex Pistols and inaugurated his own post-punk band, Public Image Ltd., an act of renunciation that, due to Lydon’s eminent stature, widely heralded the end of punk (or, more accurately, the end of its first wave).

Indeed, by 1978, punk’s cry of “anarchy in the UK” rang hollow. As the country embraced conservatism, punk not only became corrupted by the market but also absorbed the social problems that it should have rallied against, namely misogyny and racism, as evidenced by songs like the Sex Pistols’ “Bodies” and the general infiltration of skinheads into the scene. Post-punk, then, was a response to punk, with new groups clarifying and activating the politics of their predecessors’ anti-establishment posture. Instead of empty rabble-rousing, groups like Scritti Politti wrote lyrics informed by leftism, feminism, and poststructuralism; instead of rehearsing the masculine, appropriative, and corporate logic of rock and roll, groups like the Raincoats made diffuse, difficult music that remained outside the mainstream.

What did it mean for Buzzcocks if, by the time they released their first LPs, many people found punk passé? Both albums certainly capitalized on punk’s new mainstream position: Energetic songs like “I Don’t Mind” and “Ever Fallen in Love” hit the charts with giant hooks and simple arrangements of guitars, bass, and drums. But Buzzcocks appealed to post-punks too, and a kindred dissatisfaction with punk rock percolates through these recordings: in Pete Shelley’s strange high-pitched yodels, in his nongendered lyrics, and in the electronic breakdown of songs like “Sixteen.” By mid-1978, Shelley—the group’s co-founder and, after Devoto left, lead singer-songwriter—had himself wondered about punk’s relevance. What did his band offer instead? It wasn’t exactly post-punk’s progressivism, nor was it New Wave’s sophistication; rather, Buzzcocks offered something else. Here, punk wasn’t dead, just different.

Although Another Music’s first track, “Fast Cars,” contains a reference to Ralph Nader, Buzzcocks didn’t really address political matters; instead, Shelley, who passed away in December, echoed the late-’60s slogan “The personal is political.” Writing in his zine in 1976, the same year that Labour Prime Minister Harold Wilson resigned, Shelley declared: “I’m not on about party politics I’m talking about PERSONAL politics. The way you react to the people around you. The ways that you love them, fuck them, hate them, slate them.” Another Music and Love Bites attest to these actions, primarily the fucking, hating, and slating. That is, while Buzzcocks are often praised for writing love songs—for “showing how love makes the world go round,” to quote Melody Maker—the tracks rarely depict sweet romance. Love is either imaginary, stifled, lusty, deceitful, possessive, or aggressive.

In each context, Shelley, who was bisexual, made a point to remove gendered pronouns, a means of letting all listeners identify with the lyrics as well as of protesting punk masculinity. While the ambiguous character of Shelley’s songwriting elucidates his “personal politics” in this respect—that is, as a search to understand the other, no matter who that other is—it also allows the other to become his self. Throughout Another Music and Love Bites, Shelley grapples with an indeterminate perception of the “Real World” and seeks to locate himself within it. “Reality’s a dream,” he says on “I Don’t Mind,” “A game in which I seem to never find out just what I am.”

If punks usually externalized their anger and anxiety, Shelley, by contrast, turned inward. In many of his songs, it sounds like he’s standing in front of a mirror, ascertaining the difference between what he observes (“you”) and what he really is—his unusual voice, or his birth name (McNeish), or his status as a “punk.” He often responds with abject images of self-consumption or self-annihilation: “You swallow my tongue,” he sings; “my heart is only one mouthful.” If the “you” doesn’t swallow him, it tears him up, keeps him together, tampers with his mind. Surrounded by chaos, both musically and socially, he’s left scattered and confused, wondering “Is it all real?” and discerning, ultimately, that “it all comes down to dust.”

Buzzcocks dipped their toes into post-punk aesthetics—the noise of “Sixteen,” the machinic pulse of “Late for the Train”—but it was this psycho-physical fragmentation, within a political landscape moving toward austerity and a subcultural landscape promoting strict identification, that pushed them past punk. If the Sex Pistols insisted that there was “no future,” Buzzcocks opened a door to something beyond the now: “My future and my past are presently disarranged,” sings Shelley, waiting, uncertain, for “an age yet to come.” To survive until then, he’d have to embrace the disarrangement. Perhaps Shelley, whose emotions required an “Operators Manual,” took cues from the cyborg image of Kraftwerk, a group he admired. Cyborgs presented a model for the future of humanity that appealed to post-punks as well as feminist scholars in the years after 1978—a way of being two things at once.

Despite his interest in technology, though, Shelley always came back to sex and, in turn, to biology. Buzzcocks had started their own label to release Spiral Scratch, a do-it-yourself venture that inspired punks and post-punks alike. The label was called New Hormones because, as band manager Richard Boon said, “There’d been an identification around 1976 of a ‘new hormone.’… Obviously, we are all products of our genes and ruled biologically by our hormones, but—like the music being made—it suggested some way out.” Punk, like so many other subcultures, split apart soon after it started. Now, listening to Another Music and Love Bites, one still gets caught up in Buzzcocks’ difference and thrust into the songs, jittering along with them, opening up space for regeneration. One gets caught, in part, because the songs are really, really catchy. Even if Buzzcocks themselves succumbed to punk’s precarious economic dynamic by 1981, their first two LPs hinted at a “way out”: a call to interrogate one’s existence, to let oneself mutate like a new hormone.