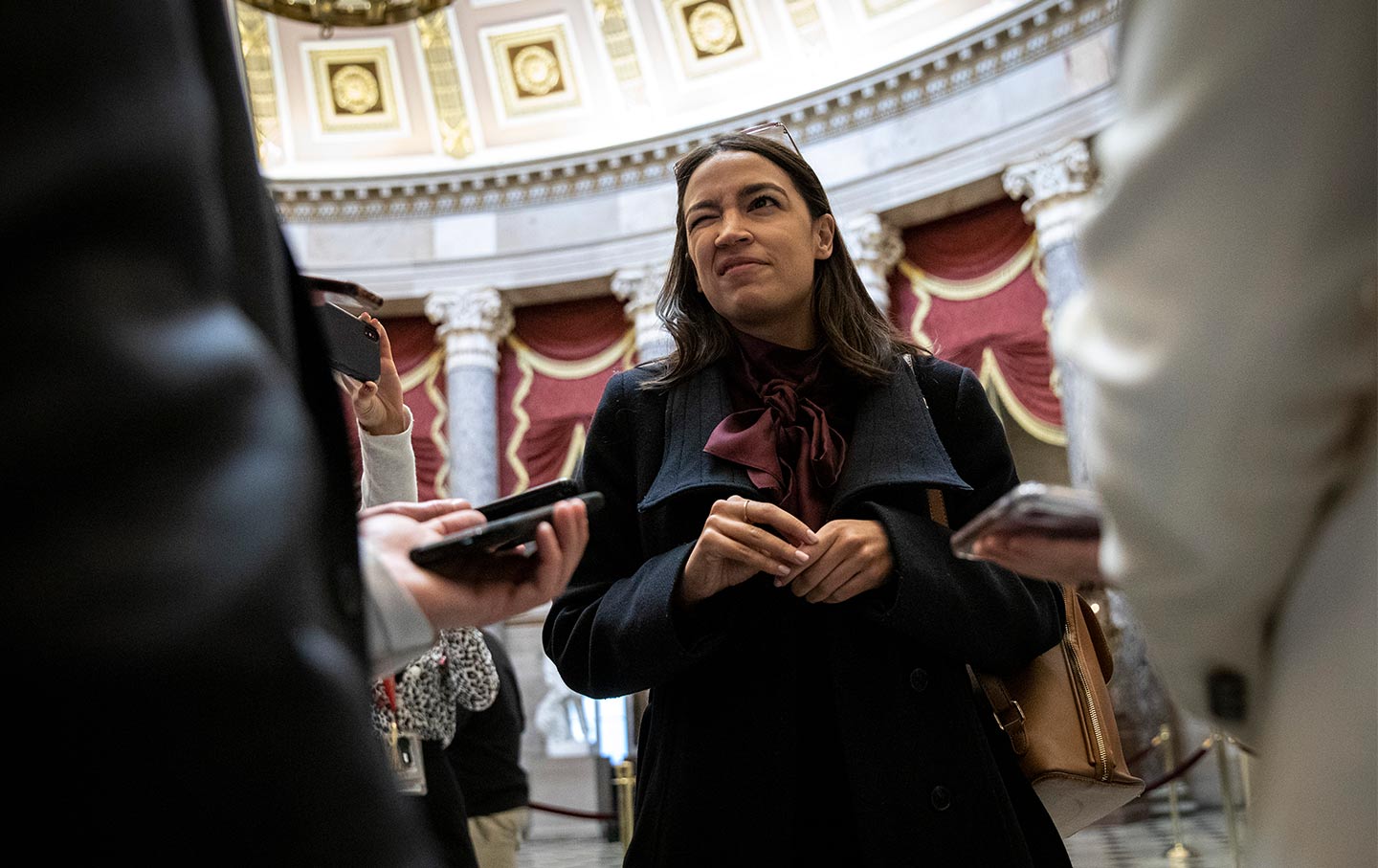 Representative Alexandria Ocasio-Cortez speaks to reporters in Statuary Hall at the US Capitol on December 18, 2019. (Drew Angerer / Getty Images)

As 2019 closed, the centrist pundits and politicians who make it their mission to police the Democratic Party were busy reanimating one of the oldest lies in the book. They were aiming at 2020, the year in which the party will nominate a candidate to take on the biggest liar in American politics: Donald Trump. To beat Trump, the centrists argued, Democrats must reject “purity tests.”

Alexandria Ocasio-Cortez, luckily, has recognized this threat contained in the coded language about “purity tests” and countered it with a masterful defense of the politics of principle that will be essential to upend Trump and Trumpism. She finished the year arguing that Democrats must stand strong for their ideals in 2020, or they will run the risk of letting Trump frame the debate.

“For anyone who accuses us for instituting purity tests, it’s called having values. It’s called, giving a damn,” the Democratic representative from New York told a cheering crowd of 14,000 at a December 21 rally for Bernie Sanders in Venice, California.

While at least one Sanders rival, Pete Buttigieg, has been busy decrying purity tests regarding issues and strategies, AOC has pushed back against a politics in which the parties are defined by the demands of big donors—and the cautious policies they favor. “It’s called having standards for your conduct to not be funded by billionaires but to be funded by the people,” she said.

The wrestling over standards between progressives and centrists is real, and it can be healthy for a democracy. Unfortunately, the centrists who refuse to surrender their rigid grip on the Democratic Party—especially when it comes to naming presidential contenders—want Democrats to believe that the only way to tackle Trump, the man who has shredded every standard for electioneering and governing, is with a return to politics as usual. They imagine that it is possible to make politics great again. Their back-to-the-future approach, which is as dangerous as it is naive, suggests that the 2016 election was an aberration.

Centrism is an unyielding ideological construct. It demands that candidates and parties abandon ideals in order to satisfy the whims of professional pessimists like David Brooks of The New York Times, who earlier this year reduced the Democratic contest to a David Brooks primary. In a Times column headlined, “Dems, Please Don’t Drive Me Away,” Brooks warned, “The party is moving toward all sorts of positions that drive away moderates and make it more likely the nominee will be unelectable. And it’s doing it without too much dissent.”

Never mind that poll after poll shows that the “positions” Brooks perceives to be electorally poisonous—support for real health care reform and a sufficient response to the climate crisis—are, in fact, quite popular. Never mind that Brooks, a man unscathed by even the slightest measure of irony, bemoaned the lack of dissent in a column prominently featured in the nation’s most influential newspaper. Brooks was not happy because no one seemed to accept his premise that “the moral case against Trump means hitting him from the right as well as the left.”

The defenders of the empty politics of the past spent 2019 in a fret fest over the success of a democratic socialist, Bernie Sanders, and a progressive anti-monopolist, Elizabeth Warren, in framing a bold vision for the party and the 2020 campaign. The Washington Post’s Catherine Rampell warned against “lazy sloganeering—lately exemplified by Medicare-for-all and the Green New Deal” and counseled that Medicare for All was “in danger of becoming a purity test for 2020 candidates.”

Actually, Medicare for All should be a purity test for candidates; as AOC said, “it’s called having values.” If the Democratic nominee in 2020 cannot communicate a vision for treating health care as a right, then the party will sacrifice one of its strongest tools for mobilizing young and disenfranchised voters.

Democrats should recognize the value of keeping pure on major issues—even if major donors might ask them to compromise. Clarity on the big issues helps a party to increase turnout among potential voters who agree and to shape the discourse in ways that appeal to independent voters who are frustrated by the concessions that both major parties make to America’s oligarchs.

It is reasonable to suggest, as does former president Obama, that the Democrats must avoid being so pure that they only attract “people who already agree with us completely on everything.” Even Warren, who made her name taking on the big banks, admits, “Nobody is perfect, and nobody is pure.” But Warren also says that Democrats have to avoid compromising at the start of the process, with “vague calls for unity.” And Sanders continues to advocate for a renewal of President Franklin Roosevelt’s “I welcome their hatred” approach to the billionaire class.

In the last Democratic debate of the year, Buttigieg decried efforts to apply “purity tests” when it comes to campaign fundraising and claimed that “in order to build the Democratic Party and build a campaign ready for the fight of our lives, these purity tests shrink the stakes of the most important election.”

Warren and Sanders stood their ground, making the case for funding campaigns with lots of small donations as opposed to bundles of big checks. Buttigieg stood his ground, as well, rejecting charges that he is running as “Wall Street Pete,” defending “traditional fundraising” and telling The Washington Post, “The thing about these purity tests is the people issuing them can’t even meet them.”

Perhaps. But Democrats should at least try to meet some of them. That was AOC’s point when she warned against buying into the fantasy that “there is no difference between being funded by a handful of wealthy people and being funded by small grassroots donations.”

“Let me tell you something,” the former waitress explained. “I go into work all the time and I hear people say ‘what will my donors think?’ I hear that phrase. I hear and I see that billionaires get members of Congress on speed dial and waitresses don’t.”

If Democrats want to mobilize the masses in 2020, they’ll need the waitresses—and the rest of the working class—not the defenders of billionaire money and elite centrism.