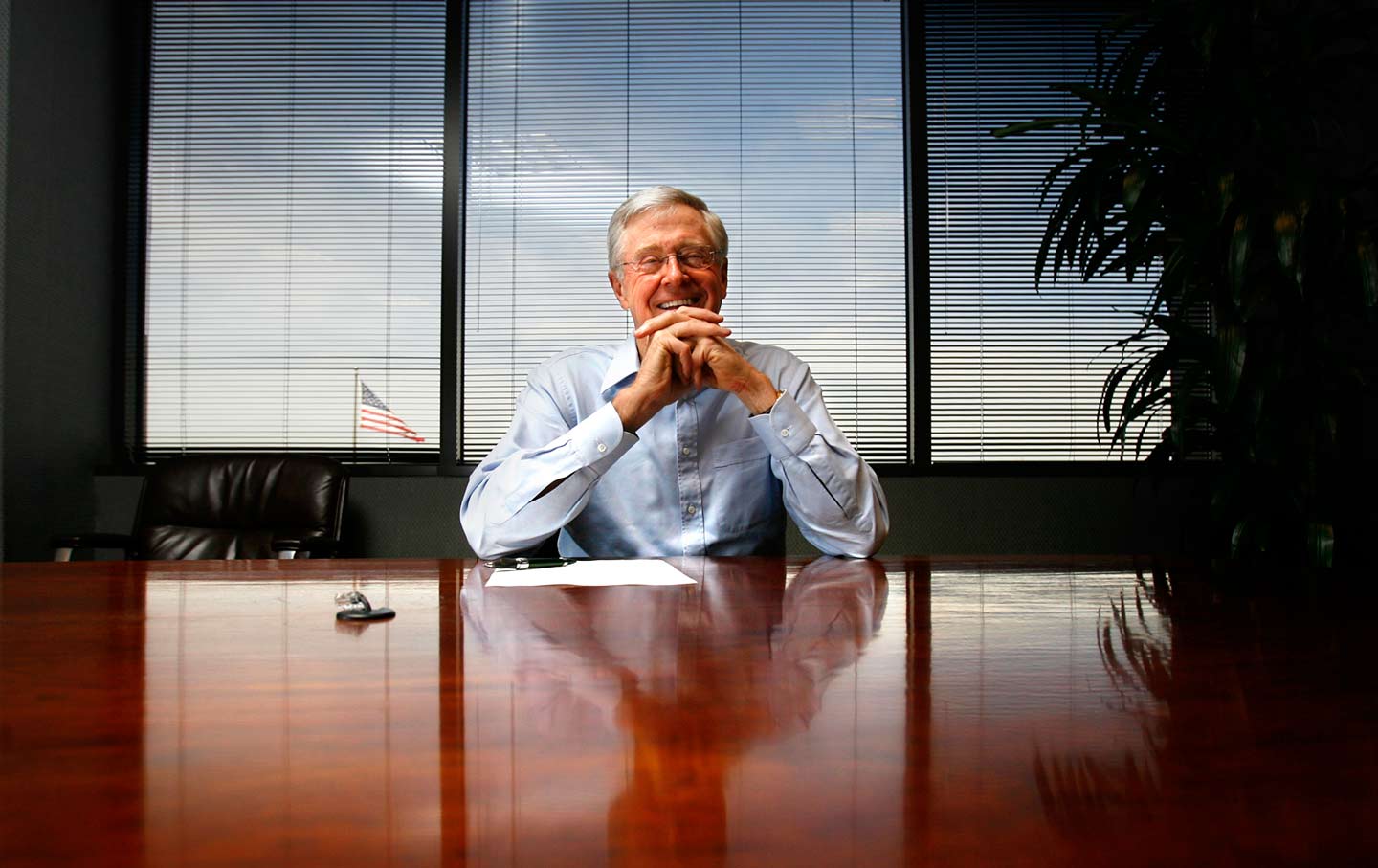 Charles Koch, CEO of Koch Industries Incorporated, was listed by Forbes in 2015 as the fourth-richest person in the United States. (AP Photo / Topeka Capital-Journal, Mike Burley)

The 400 richest Americans now have more wealth than the bottom 61 percent of the population, a report released on Wednesday by the Institute for Policy Studies (IPS) reveals. According to “Billionaire Bonanza: The Forbes 400 and the Rest of Us,” just the twenty individuals at the top of the pile—a group that could fit into a Gulfstream G650 luxury jet, according to the study’s authors—now control more wealth than the bottom half of the population. That’s 152 million people living in 57 million households.

And there’s a stark racial divide at the top. The 100 richest households own more assets than the entire African-American community (there are just two black people on the Forbes 400 list, one of whom is Oprah Winfrey). And just 182 individuals on the Forbes list have more assets than America’s entire Hispanic population.

But Chuck Collins, director of IPS’s Program on Inequality and the Common Good and a co-author of the report, tells The Nation that their study likely underestimates the scope of the problem. “Our wealth data is a tip of the iceberg,” he says. “So much wealth among the über-rich is hidden, either in offshore tax havens or in these loophole trusts where money is shuffled around into private corporate accounts or between different family members, and it disappears from taxation or any sort of oversight or accountability. So there’s a huge amount of escaped wealth that isn’t even factored into these statistics.”

And Collins says it’s only getting worse. “These inequalities really undermine our quality of life,” he says. “We need to explain to people who say ‘So what, I don’t care how much the Forbes 400 has’ that it really does touch on all of our lives, deeply and profoundly.”

It’s only when you look past the numbers that the scope of the problem comes fully into focus. A 2009 study published in the British Medical Journal compared income inequality (which is less extreme than wealth inequality) in the United States and 14 other wealthy countries, and found that our skewed income levels corresponded with 893,914 avoidable deaths per year compared with those other economies. That’s more unnecessary deaths than are associated with tobacco use, car accidents, and gun deaths combined.

Stephen Bezruchka, a professor of public health at the University of Washington, told me in an interview last year that stress is a key driver of those outcomes. “What happens is those lower down the economic ladder experience more stress,” he said. “They secrete more stress hormones until they’re burned out. Stress is our 21st-century tobacco.”

A recent study by Princeton economists Angus Deaton and Anne Case found that the mortality rate among white, middle-aged Americans with limited education is increasing, while those of every other group—and the citizens of every other advanced country—continue to fall. The increase in deaths among this group is attributable to what The New York Times described as “an epidemic of suicides and afflictions stemming from substance abuse: alcoholic liver disease and overdoses of heroin and prescription opioids.” One theory, offered by Sam Pizzigati, is that this population suffers from “thwarted aspirations,” having been raised with expectations of upward mobility that never came to fruition.

Collins says that these levels of inequality also tear at our social fabric. No longer do Americans feel like we’re all in the same boat; we now “live in parallel universes.” As a result, he says, “people create mythologies about each other”—like the “makers versus takers” rhetoric that reared its ugly head during the 2012 presidential election.

The concentration of wealth at the top isn’t the result of some sort of organic process. The top one-10th of 1 percent of American households controlled about 7 percent of the nation’s wealth in the mid-1970s. By 2000, their share had grown to about 15 percent, and today it’s well over 20 percent. Those at the very top didn’t become three times as smart or lucky or good-looking in the intervening years. They’ve benefited from changes in things like trade policy, the tax code, and collective-bargaining rules—all policy changes they’ve used their wealth to champion.

The IPS report offers policy recommendations that might help turn the tide. It suggests cutting off a variety of “wealth escape routes” that people who hire armies of tax accountants enjoy; raising the floor with minimum wage hikes, better access to healthcare, debt-free higher education, and paid family leave; and leveling the political playing field with campaign finance reform. Others have proposed a variety of wealth-building programs like universal savings accounts that might be subsidized for low-income savers.

But that brings us to the obvious roadblock: Studies by Princeton’s Larry Bartels and Thomas Hayes at Trinity University have found that our elected officials are highly sensitive to the interests of the wealthiest Americans (and overwhelmingly belong to that group themselves), pay some attention to those of the middle class—and the views of the poor don’t factor into legislators’ voting tendencies at all.

And what do the interests of the rich and powerful look like? A 2013 study by Bartels, Benjamin Page, and Jason Seawright found that those in the top 1 percent are heavily involved in politics, and they tend to focus their advocacy on advancing their own narrow self-interests. On average, they’re less likely than the population as a whole to support robust social safety nets, public education, and expanded access to healthcare. Other studies have found that the affluent “showed reduced sensitivity to others’ suffering” when compared with working- and middle-class people. That’s who’s in charge.

With stranglehold the wealthy have on our politics, it’s hard to see where this cycle ends. And while we have the greatest degree of wealth inequality in the developed world, this isn’t an American problem. In Europe, the rise of far-right, ultranationalist parties has been linked to rising inequality—and declining economic security for the middle class. Thomas Piketty, author of Capital in the Twenty-First Century, argues that sky-high inequality in the Middle East is a major reason terrorist groups like ISIS find fertile ground for recruitment.

One reason for hope, according to Collins, is that the public’s awareness of just how problematic these hugely wealthy dynasties are becoming has increased. “People are realizing that a certain amount of inequality is part of how our society works, but these are absurdly extreme levels of inequality,” he says. And while we can talk all day about policy fixes, those things “won’t matter unless we actually build a movement to tax wealth and invest it in things that create opportunity for everyone else.”