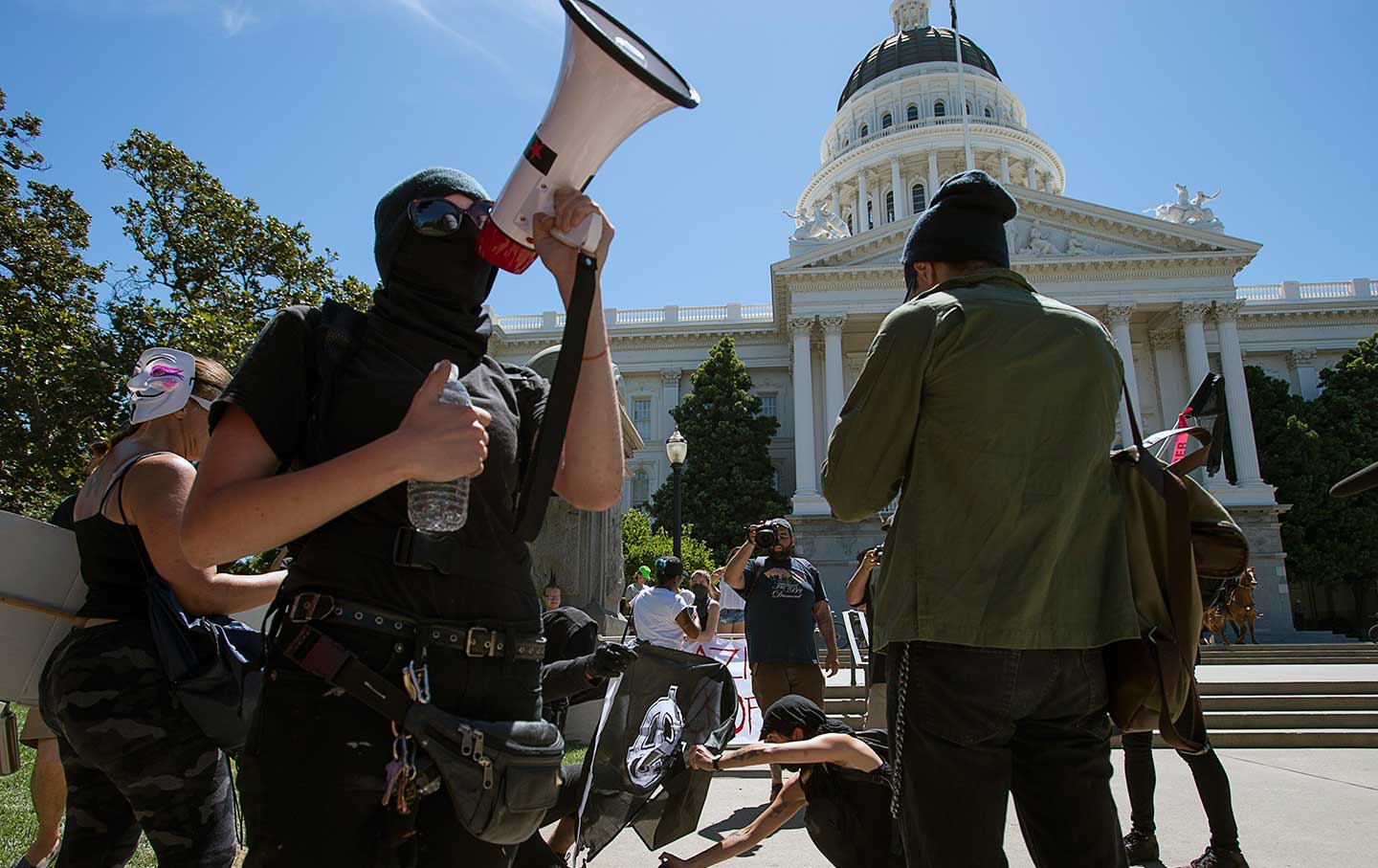 Members of the group ANTIFA Sacramento stage a counter-protest against the Traditionalist Worker Party and the Golden State Skinheads at the California state Capitol in Sacramento, California, on Sunday, June 26, 2016. (Paul Kitagaki Jr. / The Sacramento Bee via AP)

Richard Spencer, the white-nationalist provocateur, is beating a retreat, at least for now. In a YouTube video, Spencer called off his tour of colleges, saying a “course correction” is in order and adding: “Antifa is winning to the extent that they’re willing to go further than anyone else, in the sense that they will do things in terms of just violence, intimidating, and general nastiness.”

At The Intercept, Natasha Lennard writes that “Spencer’s statement, celebrated by antifa groups and supporters across social media, offers a sharp rebuttal to the glut of claims that antifa practices serve as a gift to the far right.” For Lennard, Spencer’s acknowledgement that antifa activists have taken the “fun” out of being a fascist settles a longstanding argument about antifa’s tactics.

Lennard is right to call out “a cottage industry of panicked media commentary [that] has dedicated itself to decrying the threats that antifa and its ‘no-platforming’ stance pose to free speech.” As UC Berkeley Chancellor Carol Christ said last year, “Free speech has been adopted by the alt-right as one of its strategies to construct a narrative about universities that is extremely useful for their political goals.” There have been scattered incidents of violence by campus activists, including antifa members, but most of the mainstream “free speech debate” has centered around conservative speakers’ “complaining about an atmosphere of intense pushback and protest that has made some speakers hesitant to express their views and has subjected others to a range of social pressure and backlash, from shaming and ostracism to boycotts and economic reprisal,” as Thomas Healy wrote for The Atlantic.

The answer to hateful speech is more speech, according to the cliché, but that doesn’t seem to apply to college kids condemning intentionally provocative reactionaries, even when their protests are nonviolent.

Left unstated but implied in Lennard’s piece is that Spencer’s apparent withdrawal from the campus wars not only proves that standing up to Nazis makes it harder to be a Nazi, but also vindicates all of antifa’s tactics, including fighting them in the streets.

Does it? On the left, there’s been a long-standing debate about whether violence, specifically, is self-defeating. Antifa may well be making Spencer’s life hell, but the unknown unknown here is whether they’d be more or less effective if they focused exclusively on nonviolent tactics.

“It’s important to understand that antifa politics, and antifa’s methods, are designed to stop white supremacists, fascists, and neo-Nazis as easily as possible,” says Dartmouth historian Mark Bray, author of Antifa: The Anti-Fascist Handbook. “The vast majority of their activities are nonviolent. They function in some ways like private investigators; they track neo-Nazi organizing across multiple social-media platforms.” Doxing—publicly disclosing the identities of members of the fringe right—is a central tactic of antifa, albeit one that gets less media attention than fighting them with sticks and stones. Bray says it’s about “telling people that they have a Nazi living down the street, or telling employers that they’re employing white supremacists.” He adds that, “after Charlottesville, a lot of the repercussions that these khaki-wearing, tiki-torch white supremacists faced were their employers firing them and their families repudiating what they do.” (Just this week, the Pacific Northwest Antifascist Workers Collective outed a mortgage consultant working for Wells Fargo in Oregon as a white supremacist who had attended the “Unite the Right” hate rally in Charlottesville, and the bank promptly announced that he is no longer an employee.)

Lennard has written several pieces for The Nation celebrating Nazi-punching and framing the debate as one between mushy liberals who want to engage in dialogue with white supremacists and antifa activists who refuse to legitimize their noxious ideology. But when Noam Chomsky said that antifa is “generally self-destructive” and “a major gift to the Right,” he was referring specifically to those who come out to fight. “When confrontation shifts to the arena of violence, it’s the toughest and most brutal who win—and we know who that is,” Chomsky told The Washington Examiner. “That’s quite apart from the opportunity costs—the loss of the opportunity for education, organizing, and serious and constructive activism.”

As viscerally satisfying as punching Nazis may be (and I won’t deny enjoying that viral video as much as anyone), it’s clear that far-right groups have enjoyed significant success recruiting thugs to duke it out with antifa activists. Mark Bray argues that antifa violence is primarily about self-defense—and that was the case in Charlottesville, where police appeared to hold back while Nazis ran amok—but in places like Berkeley, California; and Portland, Oregon, both sides come ready to fight in what has become a predictable dance of violent confrontation.

There’s good reason to believe that antifa has the Nazis on the run despite the violent tactics and not because of them. A study of black liberation movements in the 1960s by Princeton University political scientist Omar Wasow found a clear mainstream backlash to political violence. “Black-led nonviolent protests precipitate increased Congressional debate about ‘civil rights’ and increase proximate county-level white Democratic voteshare in the 1964, 1968 and 1972 presidential elections,” wrote Wasow. “By contrast, disruptions in the same period in which some protester-initiated violence occurred spark Congressional discussion of ‘crime’ and ‘riots’ and cause a statistically significant decline in proximate county-level white Democratic vote-share.”

Antifa’s big-picture strategy—making it clear that inherently violent, racist ideologies are not acceptable in a pluralistic society and creating a tangible cost for those who adhere to them—is laudable. But given that most of what they do is in fact nonviolent, they have a public-relations problem that stems entirely from the widespread perception that they represent a mirror image of their fascist opponents.

In addition to doxing fascists and depriving them of venues, antifa activists have engaged in a number of creative tactics that haven’t resulted in the same kind of blow-back as they’ve gotten for rumbling with white-nationalist goons. White-supremacist websites have been systematically kicked off of large swaths of the Internet. Klansmen have been sent packing by the mockery of activist clowns in Knoxville, Tennessee. In Germany, a town responded to a white-supremacist march by “sponsoring” its participants—raising money for anti-fascist groups on the backs of the very fascists they oppose.

Antifa activists are unlikely to be swayed by the argument that embracing a “diversity of tactics” may not represent an example of best practices. Last year, when I asked Scott Crow, a gun-toting former antifa organizer and author of Setting Sights: Histories and Reflections on Community Armed Self-Defense, about the movement’s PR problem, he said, “it doesn’t matter. Because antifa has a singular goal—to shut down fascism—so it doesn’t matter what the media says. And that’s always been the case.”

It should matter to other progressives. As I wrote last year, since the end of the Vietnam era, the far right has held a near-monopoly on political violence in the United States. So while violent confrontation is just one antifa tactic out of many, in addition to being a potent recruiting tool for right-wing hoodlums, it also muddies the waters around the primary source of political violence in America. That’s a problem for everyone.