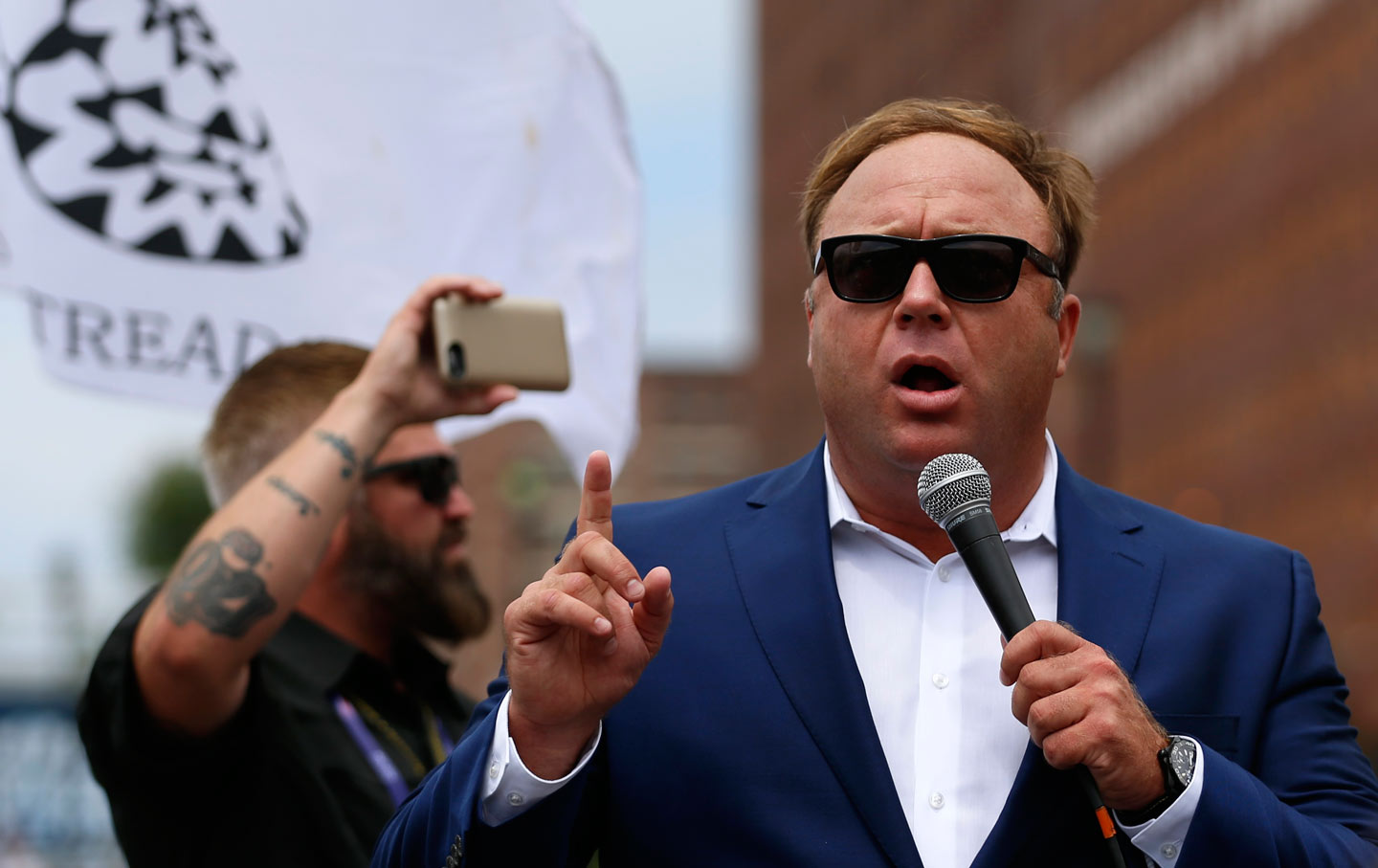 Alex Jones speaks at a Trump rally near the RNC in Cleveland, Ohio, on July 18, 2016. (Reuters / Lucas Jackson)

Somebody is “putting chemicals in the water that turn the frickin’ frogs gay.” The Sandy Hook massacre was a hoax perpetrated by a group of pro-gun-control parents who faked the murder of their own children. The September 11 attacks, too, were somehow a sham—never mind for what purpose or by whom. FEMA is planning to force God-fearing Americans into concentration camps. Democratic Congressman Adam Schiff is a “fairy” and a “cocksucker…sucking globalist dick.” Hillary Clinton secretly ran a child sex-trafficking ring out of the Comet Ping Pong pizzeria in Washington, DC.

Such are the musings of the Infowars impresario, Alex Jones. But if you think Jones is merely crazy, he’s got you fooled, too. Like his most prominent fan, who currently resides in the Oval Office, Jones is a practiced grifter who specializes in preying on the ignorance and insecurity of his customer base. Sweaty outbursts and erratic gesticulations aside, Jones brings to his swindle a coldly calculating eye and a genuine talent for shameless manipulation.

As a lengthy Buzzfeed profile demonstrated earlier this year, Jones’s unhinged rants are closely tied to the products he hawks in his Infowars store to the kind of losers and lunatics who fear the presence of fluoride in their toothpaste. (I’m not kidding: He sells fluoride-free toothpaste.) According to the former Infowars employees that Buzzfeed interviewed, it was the job of his staff to find failing products, negotiate sweetheart deals, and then make up nonsensical threats to frighten gullible rubes into buying this worthless crap. (“I’ve seen him undercut a company that sells survival straws for $25, force them down to $10, and sell them at $50,” yet another ex-employee told Buzzfeed.) When Jones was forced in a recent child-custody case to explain what he was up to, his lawyer admitted that his client was merely practicing “performance art.”

One might say much the same about Donald Trump, though we can’t know for sure. Both he and Jones enjoy a genius-like talent for finding words that reach into the hearts and minds of America’s surprisingly large lunatic fringe, not only playing them for big bucks, but also weaponizing them against common sense, social peace, and democracy itself.

Sometimes they operate as a tag team. In late 2015, Trump appeared on Jones’s show and called the host’s reputation “amazing,” while Infowars’ Hillary for Prison T-shirts proved a popular fashion statement at Trump’s rallies. On election night, Trump fixer (and fellow Roy Cohn protégé) Roger Stone clinked champagne glasses with Jones as Frank Sinatra’s rendition of “My Way” played on the air.

Another high-profile fan, Matt Drudge, frequently links to Jones’s latest screeds and thereby magnifies his voice many times over, far beyond the 5 million listeners and viewers he claims. On occasion, the falsehood in question will make its way to Trump, and from Trump to the wider world. In November 2016, Drudge pushed Infowars’ lies about alleged illegal voting in the US presidential election by 3 million people. Thirteen days later, Trump tweeted the baseless claim. Jones explains how this works: “I put out a video, a message to Trump, and then two days later he lays out the case. It’s like sending up the bat signal.”

Any serious journalist who honestly wanted to examine the dangers that this particular form of mass insanity, led by a psychopathic president and a professional provocateur, poses to public life would have to ask how statements so obviously ridiculous could command the assent of so many. Unfortunately for America, Megyn Kelly—the former Fox News anchor who conducted a much-hyped interview with Jones for her new show on NBC—is not such a journalist. As I’ve had all too many occasions to observe in this column, Kelly is only marginally less irresponsible than Jones, Drudge, and Trump. Deeply committed to the “verifiable fact” that Santa Claus was white, and that the New Black Panther Party is a threat to white people’s voting rights (the subject of 45 separate Kelly File reports back when she was on Fox News), NBC’s new star hire also thinks the kind of pepper spray used on student protesters is “a food product,” and that the community-activist group ACORN was in the business of sending “child rapists” to conduct the United States Census. It’s not hard to understand why Kelly would say to Jones, as she did on a tape he leaked, “I’ve always been a fan of yours until everything happened.” In her shameless suck-up to Jones, Kelly also promised not “to portray [him] as some kind of bogeyman,” and even offered to let him see which clips of their conversation she planned to use before the interview ran.

That neither Kelly and her producers nor NBC executives saw how damaging it would be to treat Jones’s violent delusions as just another point of view shows how thoroughly Fox News has corrupted the idea of truth in our society, and how little a sense of social responsibility burdens the consciences of the executives who run network news. What was perhaps most interesting about the whole affair was how quickly NBC caved in to complaints that the feature would likely celebrate Jones rather than expose him. According to a “Page Six” story in the New York Post (which none of the relevant parties has denied), Kelly’s segment on Jones was “completely overhauled” as a result. The sole reason for this, apparently, was the Sandy Hook business. Kelly reportedly called several of the victims’ families and invited one father of a murdered child on the show to share his pain. Kelly’s interview with Jones barely appeared in the segment at all.

At least we now know where the line is drawn when it comes to promoting crazy, destructive right-wing propaganda on network news. One may not deny the reality of a massacre of schoolchildren—so long as the massacre occurs in the United States and is not perpetrated abroad by “our side.” We also now see how easy it is to “work the refs” from the left, just as the right has been doing for decades. Consider how far NBC went to assuage the anger that the network experienced before the broadcast. Jones had every right to feel seduced and abandoned by Kelly and NBC. But he should have known better than anyone that the entire exercise had next to nothing to do with journalism. Rather, it was yet another piece of “performance art” designed to hawk a product—just one with a prettier face and better production values.