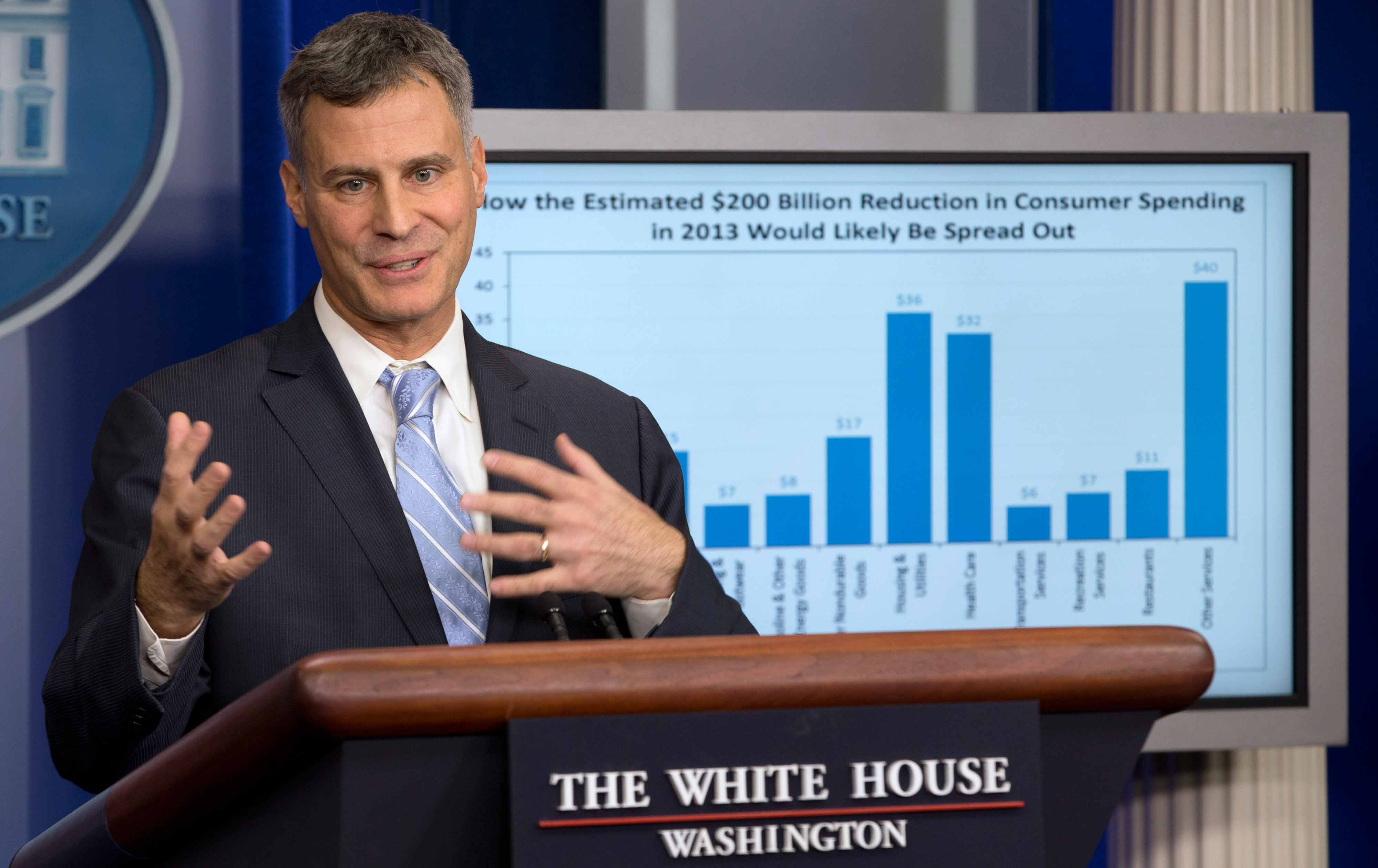 Alan Krueger was the chairman of the White House Council of Economic Advisers during the Obama administration in 2012. (AP Photo / Jacquelyn Martin)

Around 25 years ago, two young labor economists at Princeton had a question: Did an increase in the minimum wage increase unemployment?

Standard economic models insisted it did: After all, if the minimum wage increased anyone’s pay, it would make some employees not worth the extra cost to employ and, in the long run, decrease overall hiring.

This reasoning had become textbook economics going back all the way to Chicago School leader George Stigler, and was something of an article of faith among the mainstream. The notion that legally mandated higher wages result in fewer jobs was a central example of how the laws of the market made some superficially appealing policies counterproductive.

But the two Princeton economists decided to take a closer look at what happened at the New Jersey–Pennsylvania border when New Jersey bumped its minimum wage in 1992 from $4.25 to $5.05. They specifically studied employment at fast-food restaurants, the archetypal low-wage employer. What they found changed the field of labor economics forever: After interviewing around 400 fast-food establishments, they concluded that wages in New Jersey increased with no corresponding decrease in employment, nor fewer restaurant openings. They found “no evidence that the rise in New Jersey’s minimum wage reduced employment at fast-food restaurants in the state.” Employment had actually risen.

Alan Krueger was one of those two groundbreaking economists. He died by suicide over the weekend at 58.

Krueger’s professional importance can’t be overstated. His approach not only challenged long-held views on minimum wage; it also pushed the entire economics field to adopt a more empirical bent. This precipitated a trend of using very close measurements, and the identification of clever discontinuities, that could provide “natural” or “quasi” experiments that tested economic theory in the real world: For example, Krueger’s later work with Stacy Dale showed that, while students who went to selective schools tended to earn more than those who didn’t, when you looked at students who were admitted and rejected by the same schools but chose to attend less-selective ones, those students “do not earn more than other students who were accepted and rejected by comparable schools but attended less selective colleges,” with an exception for “students from more disadvantaged family backgrounds” who gained more from attending a more selective school.

“The idea of turning economics into a true empirical science, where core theories can be rejected, is a BIG, revolutionary idea,” Krueger said last year.

Krueger and his co-author David Card were not universally admired. Even though their Princeton colleague Alan Blinder described the fast-food study and their later work as a “quantum jump in quality” over previous attempts to estimate the effects of a minimum wage, the two men were criticized by many of their fellow economists for offering that impossible object of contemporary economics: the free lunch.

The research wasn’t just wrong, their critics argued: It was dangerous. Some even said that Krueger and Card did nothing less than jeopardize the status of economics as scientific discipline. “A wonderful world of reduced inequality through higher wage minima with no loss of jobs is regrettably not an option,” Daniel Hamermesh of the University of Texas wrote in a review of the pair’s work.

James Buchanan, the pioneer of the conservative “public choice” school of economics that posits that democratic and governmental institutions are inherently ineffective and doomed to be controlled by myopic and short-sighted interest groups was more colorful (and despairing) in a letter to The Wall Street Journal:

Just as no physicist would claim that “water runs uphill,” no self-respecting economist would claim that increases in the minimum wage increase employment. Such a claim, if seriously advanced, becomes equivalent to a denial that there is even minimal scientific content in economics, and that, in consequence, economists can do nothing but write as advocates for ideological interests. Fortunately, only a handful of economists are willing to throw over the teaching of two centuries; we have not yet become a bevy of camp-following whores.

Other scholars took more serious note of their findings—which were later expanded and collected in their book Myth and Measurement—with one, MIT’s Paul Osterman, concluding that “although they are too polite to say so,” Card and Krueger were essentially accusing other researchers of having “pushed the limits of acceptable practice to produce results consistent with theory.”

Card and Krueger’s findings were quickly taken up in Washington, where Krueger would cycle in and out—depending on whether a Democrat was in the White House—for the rest of his career. The Clinton administration hiked the minimum wage in 1996, and increases have been a regular feature of Democratic campaigns since then. Krueger also briefly worked for the Department of Labor, and then held two senior economic policy-making positions in the Obama administration.

Krueger’s early minimum-wage research shattered a central orthodoxy of the profession. But he was not a Marxist or Post-Keynesian radical of the type that are called “heterodox” today. Since the early 1990s, the volume of research on the minimum wage has expanded, along with political pressure to raise it even higher than Krueger advocated, to at least $15 across the country. Krueger wrote in The New York Times in 2015 that raising the minimum wage to $15 (as opposed to $12) would “put us in uncharted waters, and risk undesirable and unintended consequences.” This was a position endorsed by Hillary Clinton during the 2016 presidential campaign before she adopted the $15 goal and it became part of the Democratic platform.

Krueger’s caution showed that no matter how cataclysmic his findings were initially, he remained a careful empiricist and a temperamental moderate, even when that put him out of step with the activist currents that are already roiling the Democratic presidential primary. Nevertheless, he did not shy from addressing the question of political power, even if his choice of terminology—“monopsony power” instead of “exploitation”—was native to his discipline.

In a 2018 speech, he contrasted the textbook view of the labor market—“perfect competition—where bargaining power is irrelevant because supply and demand determine the wage,” to what he argued was really happening: “imperfectly competitive, subject to monopsony-like effects, collusive behavior by firms, search frictions, and surpluses that are bargained over.”

Krueger argued that firms were effectively setting the wages for their workers instead of bargaining over them in a perfect market, which ended up giving them some flexibility over exactly where the wage was. Policies like a higher minimum wage could, in turn, push up pay without sacrificing employment overall. He just wasn’t sure $15 was the way to go.

These observations led him to question other employer-friendly policies that thwart worker pay, such as non-compete clauses to stop employees from changing jobs and agreements between franchisees in the same chains to not hire from each other. Overall, the conditions of what is known as “monopsony” and the decreased bargaining power of workers “could help explain” the meager wage growth of American workers.

In addition to his pathbreaking academic work, Krueger was also universally regarded as kind and attentive to reporters, fellow economists, and Princeton students. He was atypically well-dressed and coiffed for a rock-star researcher, and he was a master at public communication of his work—something many prestigious economists struggle with.

All of this was in service of an overall goal of using the tools the discipline gave him to make the economic system better for regular people.

Krueger spent his career ensconced in elite, mainstream institutions, bouncing between Washington and Princeton, a fixture at Brookings who would give speeches at Federal Reserve conferences, more likely to be seen on CNBC talking about the labor market than at Occupy decrying inequality. But it’s in these spaces where economics is being remade today, whether it’s Berkeley’s Gabriel Zucman’s investigations into the tax dodging of the megarich or Dani Rodrik’s patient, persistent criticism of neoliberalism at Harvard.

The profession’s elite is slowly being radicalized by facts–and “factual” is exactly how Krueger saw himself. If his predecessors’ fondness for mechanical and expansive theories of how the economy worked were the products of “physics envy,” Krueger had a more modest, if no less revolutionary, vision.

“Many of the great advances in science, as well as the social sciences, have come about because we got better telescopes or better microscopes,” he said in an interview.

In his absence, one of those clearest lenses is forever darkened.