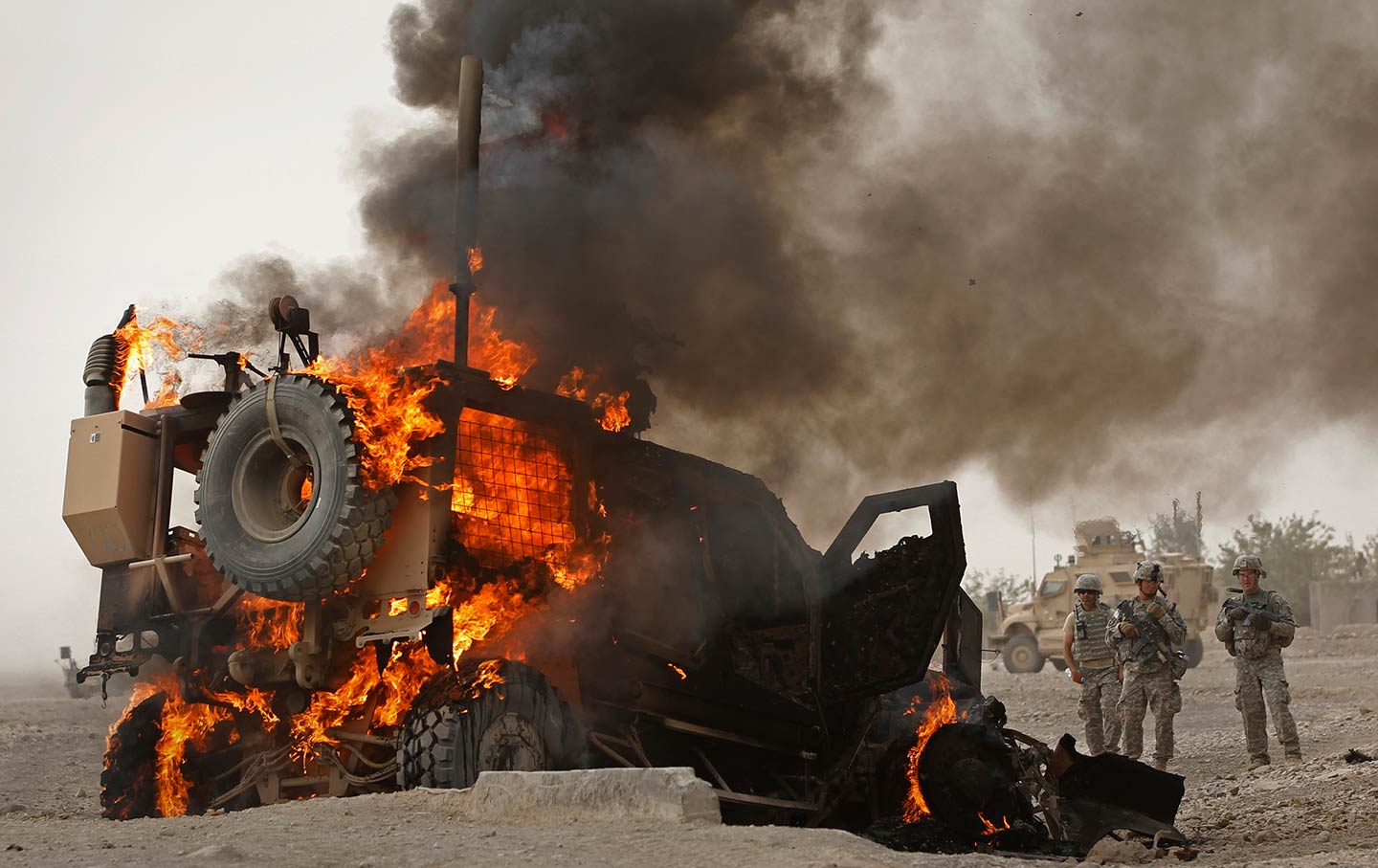 US Army soldiers watch as a M-ATV armored vehicle burns after it struck an improvised explosive device near Combat Outpost Nolen in the Arghandab Valley. (Reuters / Bob Strong)

This September 11 marks the 18th year since hijackers seized four US airliners, plowing three of them into the World Trade Center and the Pentagon and the fourth into a field in southern Pennsylvania. The attacks killed nearly 3,000 people and deranged our national politics. In the fraught months that followed, US leaders declared one war after another, miring this country in conflicts from Central Asia to the Middle East. There is still no end in sight.

The longest of these conflicts—in fact, the longest war in US history—is the one that George W. Bush launched against the Taliban less than a month after 9/11. He called it “Operation Enduring Freedom” and claimed its mission was “to disrupt the use of Afghanistan as a terrorist base of operations and to attack the military capability of the Taliban regime.” He spoke of “freedom.” He trumpeted the “generosity” America would show the Afghan people. But many of us knew what this really was: a war of vengeance, waged against an impoverished country some 7,000 miles away, with no meaningful vision for peace.

And so it has been.

Nearly two decades later, Osama bin Laden, the mastermind of 9/11, is dead, but the war goes on. The illusory promises of building democracy and liberating women have been abandoned, yet the war goes on. Thousands upon thousands have died—at least 139,000 Afghans and some 2,400 US service members—and still the body count rises. Enduring freedom, indeed.

Presidents in both parties had promised to end the war, but to no effect. In September, Donald Trump torpedoed months of negotiations with the Taliban to withdraw some 5,000 US troops by early next year. But even that failed agreement called only for reducing US forces to their level when he assumed office. His campaign promise to end “stupid wars” has simply been abandoned.

The evidence of this broken promise is strewn across the globe. Since Trump took office, US drone attacks in several nations have escalated. Our forces continue to spread out across Africa in endless pursuit of would-be terrorists. Most egregious of all, he detonated the landmark Iran nuclear deal, pushing the US to the verge of war with that nation while talking up regime change in Venezuela.

And in the Middle East? Vast swaths of the region continue to reel from the bloody fallout of the US war on Iraq, its aftereffects visible in the flood of refugees that has shaken European democracies. Our War on Terrorism has succeeded, largely, in generating more terrorists and more instability.

Wars without end expand the prerogatives of the president and the budgets of the national security state. Presidents from both parties have repeatedly invoked the post-9/11 Authorization for Use of Military Force to dispatch troops across the globe. In today’s dollars, the Pentagon’s budget now exceeds its levels at the height of the Cold War.

Forever war is an affront to our Constitution. The founders, worried that the executive had an inherent propensity for war, gave the power to declare it to Congress, believing that this decision should be made only by the people’s representatives after debate and deliberation. Now, war is our permanent condition, and Congress has essentially abandoned its constitutional responsibilities.

Polls show that strong majorities of the public, including veterans, have turned against our endless wars. Both Trump and Barack Obama won elections promising to bring those wars to an end. Instead, they’ve succeeded only in making them less visible, relying more on airpower and drones, with fewer US casualties.

Trump has argued that “great nations do not fight endless wars.” Yet when he blew up the negotiations with the Taliban, he asked, “How many more decades are they willing to fight?”

The Taliban and the Afghan government are fighting over the future of their country. The real question is how many decades are we willing to fight in a foreign land on the other side of the globe in a war of no purpose other than to avoid losing?