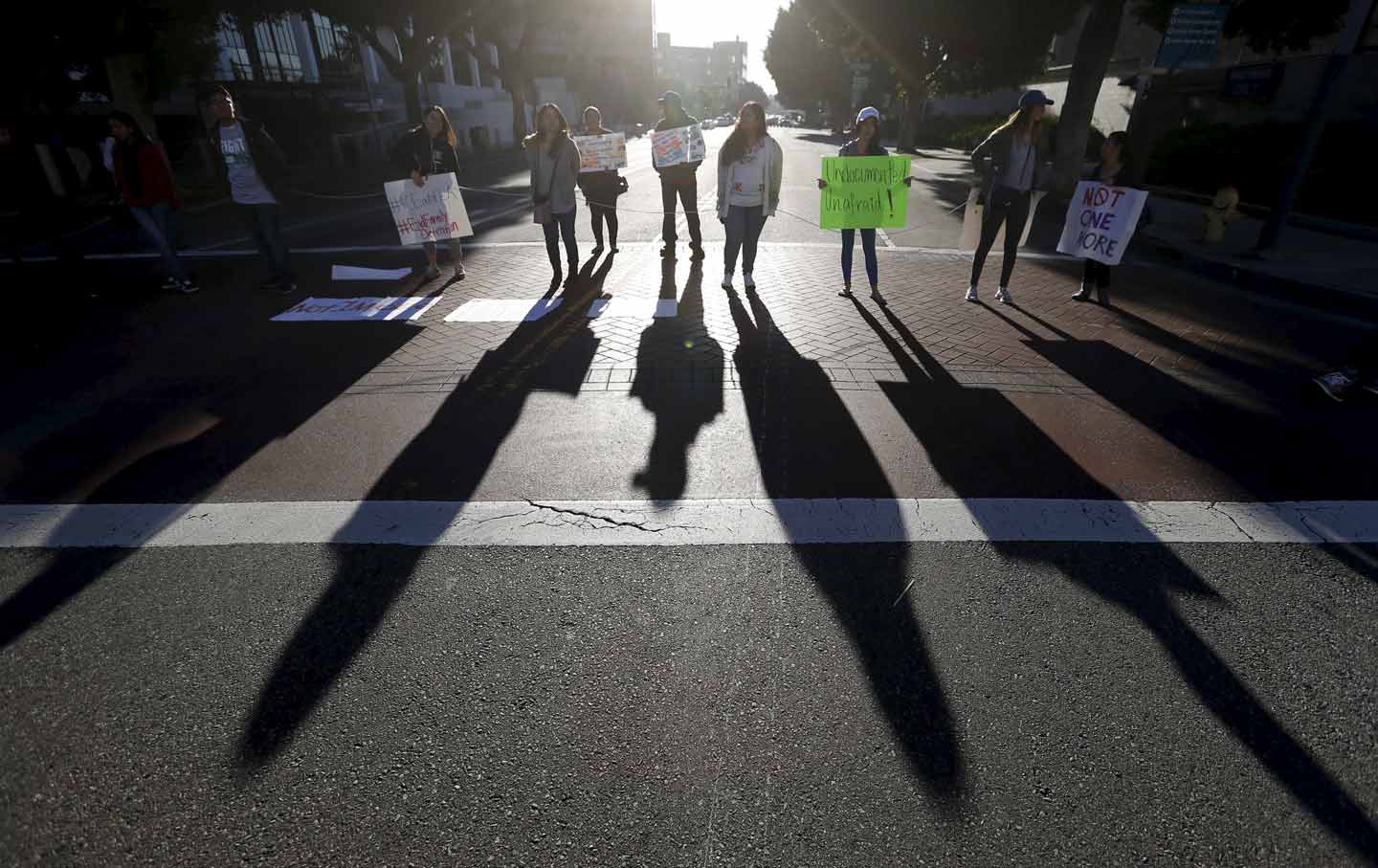 At the start of 2016, while much of the country was beginning a new year after celebrating the holidays with family, the good tidings were shattered for scores of migrants in an ambush by the Department of Homeland Security. In January, Immigration and Custom Enforcement (ICE) carried out raids in three states on a seemingly random selection of about 120 refugees who had recently fled from Central America.

The families were just settling into new lives, perhaps still anxious about the asylum petitions they had filed. The feds had other plans: mass deportations of recent border crossers, apparently intended as a symbolic “deterrent” to would-be migrants thinking about journeying over the border.

Legal advocates are now suing the federal government over those raids, alleging that Homeland Security and ICE violated public-records laws by refusing to disclose why and how these communities were targeted and what provisions were made, if any, to protect their human rights before the majority were abruptly sent “home” to the same countries they were seeking humanitarian protection from.

The lawsuit, filed by the Southern Poverty Law Center (SPLC) and private lawyers, focuses on the raids, in which “ICE agents conducted a multi-state enforcement operation, sweeping into homes across Georgia, North Carolina, and Texas” and “targeted and detained 121 people…all of whom were women and children.” They were transferred to a detention center in Dilley, Texas—which has itself been the target of legal challenges over allegations of abusive and inhumane conditions.

The raids followed the standard formula of intimidation and secrecy. ICE agents allegedly entered homes without consent. Requests to see a warrant were aggressively rebuffed. Some agents reportedly “used deception,” claiming—in a disturbing intersection of anti-immigrant and anti-black profiling—that “they were police officers looking for a suspect and showing residents a photo of an African American man.” Families were told the migrants would only be detained “for a short time to examine the women’s electronic ankle shackles.” (Often electronic body restraints are used as an alternative to full detention).

Ultimately, just 12 of the targeted families remain. Others were deported; overall, in recent months, following a surge of thousands of Central American migrants, Homeland Security has deported an estimated 800 youths who arrived unaccompanied. Terror looms in the neighborhoods of the asylum seekers who have been deemed “enforcement priorities”; these migrants had complied with the court rules and likely had valid humanitarian claims for refugee status, but were criminalized nonetheless.

As presidential candidate Hillary Clinton has phrased it, these crackdowns aim to “send a message to families in Central America: Do not let your children take this very dangerous journey.”

If the objective is to “send a message,” the raids serve as a terrifying lesson in government impunity, the lawsuit states: “The raids immediately incited widespread panic and fear in immigrant communities across the country. Immigrant families stopped answering their doors, going to work or church, or attending school.”

The grim side of their legal challenge is that any justice won now would come too late for those already deported: Until recently, they were bearing witness to Central America’s rampant human-rights abuses to the courts, but now the post-deportation lawsuit could be the last plea the government will ever hear about their rights.

Central America is still awash in violence and instability, spurred in many cases by US-supported corruption, drug-war policies, and political interference. Gangs have reportedly colonized whole neighborhoods, forcing local economies, churches, and schools to wither as children are coerced into joining the gangs or risking rape and murder. Youths face horrific abuse when traversing lawless smuggling routes, and if sent back, become even more vulnerable to coercion and violence.

These are countries with sordid histories of disappearances at the hands of criminal forces or oppressive governments. Now refugees from this turmoil are being disappeared from American soil.

But as the litigation wears on, communities are fighting to protect refugees like Wildin Acosta of Durham, North Carolina, one of several area youths detained following another ICE raid in January. His case helped galvanize a nationwide solidarity campaign as family, students, and teachers mobilized to raise awareness about the trauma refugee youths endure on both sides of the border, and demand a deportation moratorium.

Last Sunday, Wildin was finally released after six months of detention in Georgia.“It seems surreal that I’m finally out. I can’t even describe what I’m feeling,” he said in a statement announcing his reunification with his family after supporters raised $10,000 bail. No one, in fact, knows how to feel going forward; Acosta’s asylum case has been reopened, but remains unresolved.

Durham teacher John Davis, who helped lead the campaign for local young detainees, tells The Nation that Wildin’s case is “a teachable moment” demonstrating “that organizing works,” and that, since public schools embody the intersection of immigration and education issues, “I hope that other teachers in different parts of the country can realize the power that they can have in these situations,” because educators are often “perceived as having an ethical high-road status in the political context.”

Constitutional controversies surrounding ICE policies also remain unresolved. In addition to the raid lawsuit, advocates have separately sued to demand disclosure of records on the Priority Enforcement Program, a supposedly reformed approach to targeting deportations toward those with criminal records, and demand transparency on immigration courts and conditions at detention centers.

While the courts are overwhelmed with asylum-case backlogs (reaching about 474,000 claims last year, each of which typically takes over a year to reach a decision), the Justice Department seems oddly fixated on stonewalling litigation over its own practices. Still, advocates hope that, while migrants are arbitrarily imprisoned, the law can be used to hold the government accountable for its own crimes.

The families who have already been deported may vanish from the dockets. But their experiences and struggles provide an indelible message to the communities where their presence won’t be forgotten. Their neighbors’ and coworkers’ protests, lawsuits, and petitions mark an effort to redeem the loss of these families, to ensure that their legacy will be some approximation of the thing they originally sought when they made their journey: justice.