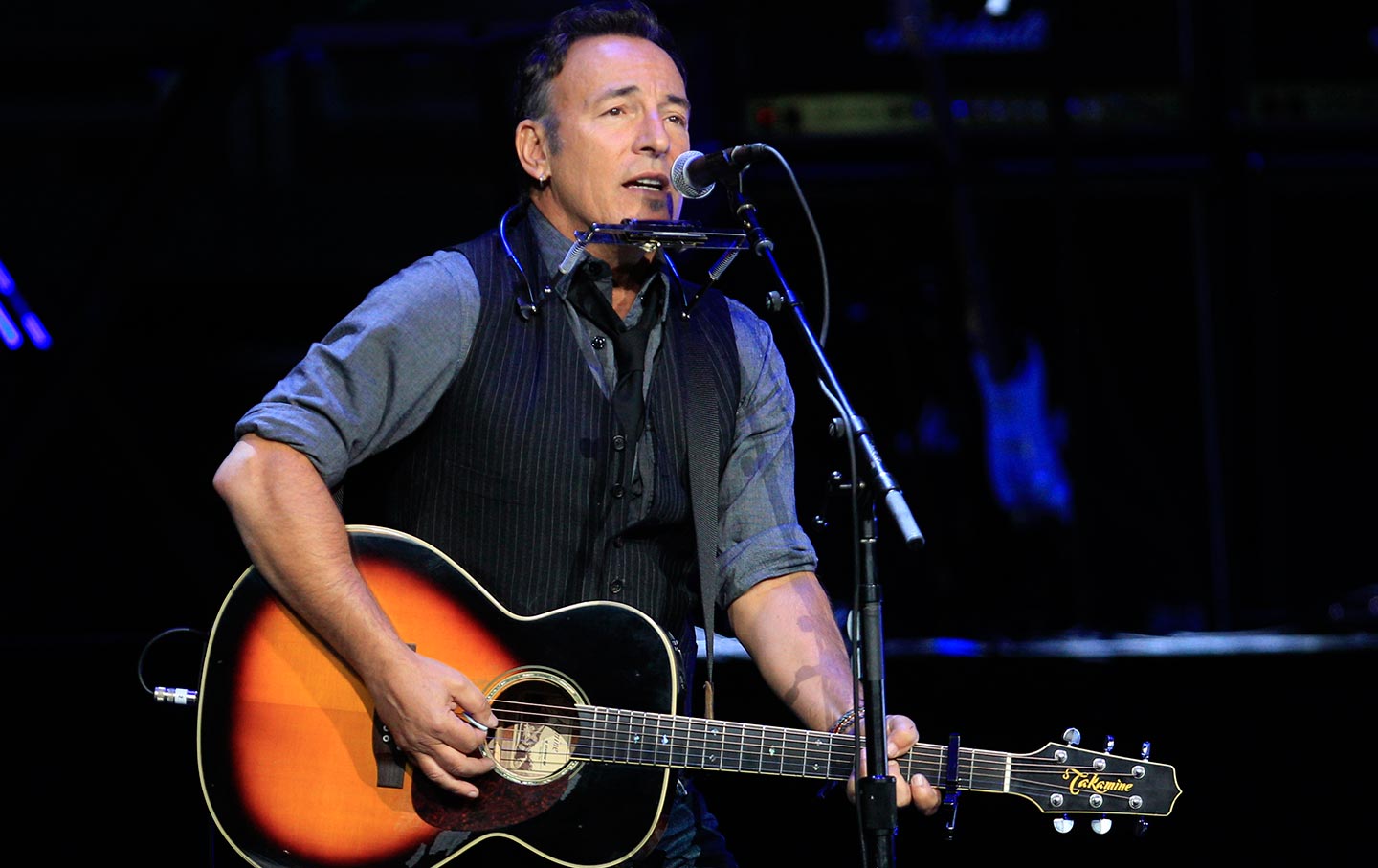 I have a picture of me and Bruce Springsteen on the lock screen of my phone. It’s from September, when he gave a great gift to his fans by meeting a lucky 1,200 of us (for 15 soulful seconds each) in Philadelphia, during his tour promoting his beautiful memoir Born to Run. I love Springsteen more than I do anyone else outside my family and close friends (and they all know that). I’ve been a fan for more than 40 years. I love his music, which has helped me learn about life, love, loss, and redemption. I love his political values.

Springsteen crystallized for me the heartbreak of being on the left, back in 2004, when he campaigned for John Kerry against George W. Bush, and Kerry lost narrowly. “The country that we carry in our heart is waiting,” he told crowds in Wisconsin and Ohio. When Kerry lost, I remembered those words, and they crushed me. I knew that country was still waiting; it might wait my whole lifetime. When he campaigned for Obama in 2008, and Obama won, I felt like that country had maybe arrived. (It still hadn’t, but we got closer.) Springsteen went out again for Obama in 2012, after expressing some disappointment and saying he wouldn’t campaign for him. He changed his mind. “ We’re still living through very hard times but justice, equality and real freedom are not always a tide rushing in,” he said then. “They are more often a slow march, inch by inch, day after long day.”

Now in this election cycle, in this long slow march to perhaps electing our first female president, I trade texts with my lady Springsteen posse—we’ve traveled the country, and even beyond, together to see him—as we see more musicians announce they’re doing concerts for Hillary Clinton—Jay-Z, Jennifer Lopez, Ne-Yo, Steve Aoki, Cher, and of course Katy Perry—and his name is not among them. To say we are heartbroken is not exaggerating. It hurts. The country has a chance to make history by electing not just a woman but the most progressive major party candidate of our lifetimes—despite the bizarrely timed interference of FBI director James Comey and Donald Trump’s cavalcade of misogyny. But the man we love—the man who campaigned for John Forbes Kerry, God bless him—has so far stayed on the sidelines.

This has been the subject of some speculation and a little journalistic inquiry. “This country is under siege by a moron,” he said to Rolling Stone about Trump in an interview upon publication of his book. Asked if his failure (back in September) to announce his support for Clinton, or that he would campaign for her, reflected a lack of enthusiasm, he declared: “No. I like Hillary. I think she would be a very, very good president.” He downplayed the meaning of the lack of plan for any kind of election concert. “I don’t know if we’ve been approached or not to do anything at the moment. If so, I would take it into consideration and see where it goes.”

I can confirm that he’s been approached.

So what’s up? Springsteen may have given us some insight into his reluctance in that same interview. “I think you have a limited amount of impact as an entertainer, performer or musician. I feel what I’ve done was certainly worth doing. And I did it at the time because I felt the country was in crisis, which it certainly is right now.”

I can understand some of Springsteen’s hesitation, whether it’s that he worries about becoming ubiquitous on the Democratic campaign trail, or losing his influence with his fan base, or even alienating them. But having acknowledged that he first appeared for Kerry “because I felt the country was in crisis, which it certainly is right now,” he forces the question: Bruce, where are you right now?

I’m not the writer Springsteen is, but I have an ear. And another plea, by Obama on behalf of Clinton in September, moved me almost as much as “the country that we carry in our hearts is waiting.” It was when the president talked about how hard Clinton has worked, how much garbage she’s faced, how much he values her, and then he said, “If you’re serious about our democracy, then you’ve got to be with her. She’s in the arena, and you can’t leave her in there by herself.”

There was something poignant to me, and I hope this isn’t sexist, to hear Obama express an anguish that many of us feel seeing Clinton sometimes alone: on the debate stage with a menacing Donald Trump looming behind her; alone as Wikileaks spreads her campaign manager’s stolen e-mails, alone as Comey violates FBI protocol to slime her with news of perhaps more suspicious e-mail. She’s been more exposed to the media than any politician in American history, but her enemies still want her stripped bare.

My friend Rebecca Traister, another passionate Springsteen fan, explored the feminist revelations we found in his memoir Born to Run. The troubadour of fast cars, hot women and steamy under-the-boardwalk encounters revealed a more contemplative, even feminist side, for his many, many female fans:

By many measures, Born to Run is for us. It cracks the macho exterior and really pulls out the guts of Bruce’s thinking on identity, on his own manhood. It reveals an appreciation and respect for women, and questions about men and how they’re made, that many of us have long suspected underpinned his music.

I felt the same way Traister did about the book. But now I need to see that empathy for women during this horrific, misogynist presidential campaign. The country that we carry in our hearts—the democracy in which women are equal partners—is still waiting. Please, Bruce, don’t let us down.