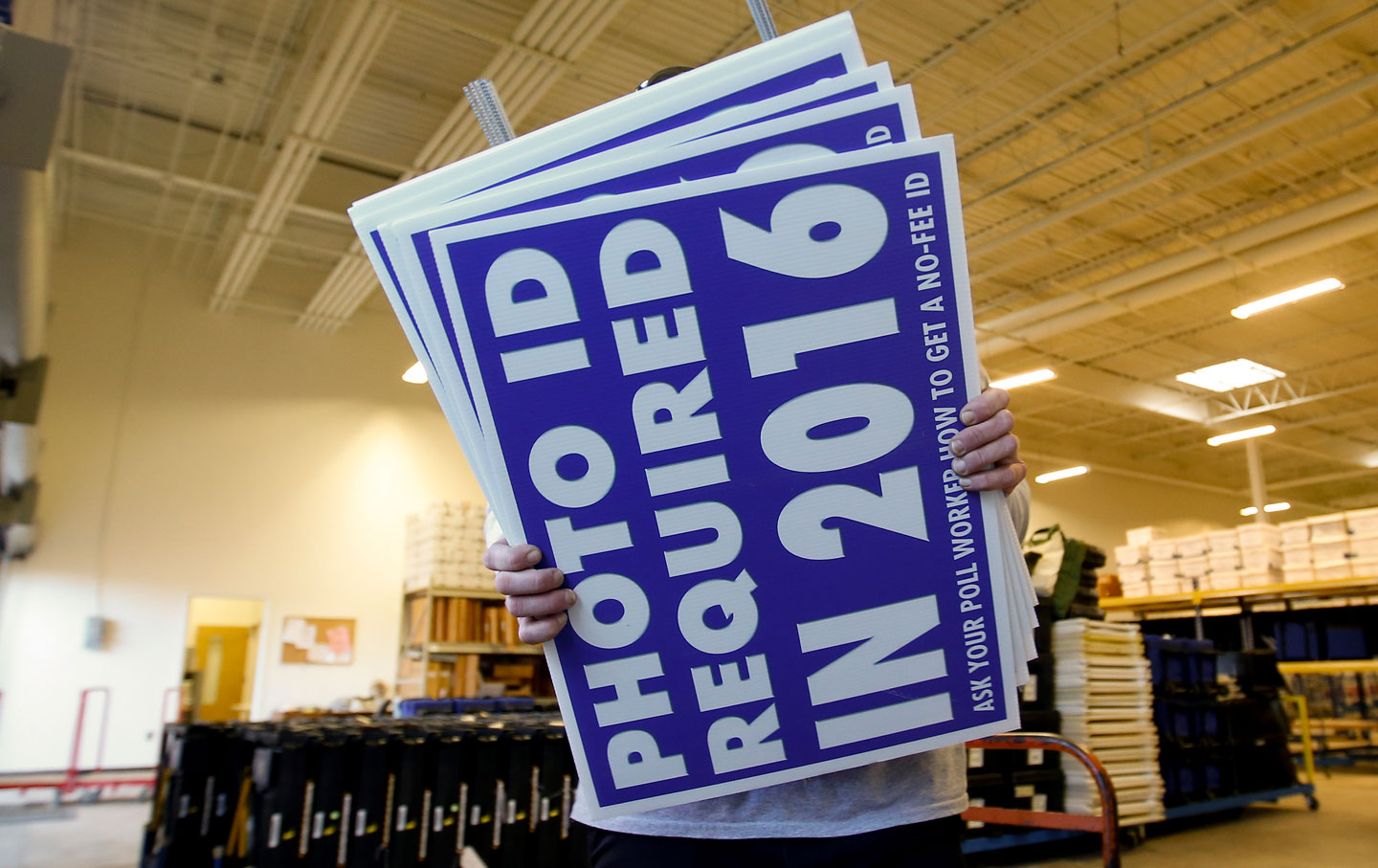 A worker carries a sign that will be displayed at a polling place. (Reuters / Chris Keane)

Larrie Butler, a 90-year-old African-American man, was born in Calhoun County, South Carolina, at a time when the South was segregated during Jim Crow. He moved to Maryland after serving in the military and attending college, but returned to South Carolina in 2010. He got a voter-registration card and voted in the state in 2010.

In 2011, South Carolina passed a strict new voter-ID law requiring a government-issued photo ID to cast a ballot. When Butler went to the DMV to switch his driver’s license from Maryland to South Carolina, he was told he needed a birth certificate to confirm his identity. But Butler was born at home, when there were few black hospitals, and never received a born certificate. When he went to the state Vital Records office to get a birth certificate, they said he needed to produce his Maryland driving records and high-school records from South Carolina. After he returned with that information, he was told he needed his elementary-school records, which Butler couldn’t produce because the school was closed. So instead he found his census record, which was not accepted because his first name in the census, Larry, did not exactly match the name he’d used for his entire life, Larrie. He was told to go to court and legally change his name at 85 years old, in order to obtain the birth certificate required to get a driver’s license in South Carolina and also be able to vote.

“It made me feel terrible,” Butler said.

After the bill’s signing, Butler spoke at a press conference 10 feet away from where Haley spoke. He held up a plane ticket and Sudafed he’d bought with his Maryland driver’s license, which he was unable to use in South Carolina to vote. Shortly thereafter, the DMV called Butler and said they’d bypass the requirement for a birth certificate, allowing him to get a state driver’s license and vote in future elections. This could be a major issue in Saturday’s Democratic presidential primary, where African Americans are expected to make up half of the electorate, in contrast to the GOP primary, which was 96 percent white.

The DOJ objected to South Carolina’s voter ID law under Section 5 of the Voting Rights Act–which the Supreme Court later gutted–and a federal court approved the law only after South Carolina agreed to allow voters without a valid photo ID to cast a ballot if they signed an affidavit explaining why they had a “reasonable impediment” to obtaining voter ID. “Without the review process under the Voting Rights Act, South Carolina’s voter photo ID law certainly would have been more restrictive,” wrote Judge John Bates. The law was blocked in 2012 but is now in effect for the 2016 elections—one of the sixteen states with new voting restrictions since 2012.

But state election officials are creating confusion by emphasizing that you need valid photo ID to cast a ballot, even though you don’t. (To make things even more complicated, voters who have a photo ID but forget to bring one will have to return to the county elections board with that ID within 10 days to have their vote counted.)

South Carolina’s new voter registration cards say you need one of five forms of photo ID to cast a ballot.

As MSNBC’s Zach Roth noted, posters distributed throughout the state say: “Photo ID Requirements Now In Effect: Voters will be asked to show one of these photo IDs before voting in person.” Only in much smaller text below that—and even there, not until the third paragraph—do voters learn that they can vote without ID.

The State Elections Board tweeted incorrect information to Kira Lerner of Think Progress, saying “If you have Photo ID, you should bring it to the polls. If you don’t, you’ll have to show it later for your vote to count.”

Brett Bursey of the South Carolina Progressive Network calls the voter ID materials “misleading propaganda passing as educational material” and says he is looking to bring a lawsuit before the general election challenging the state’s language. “We won the battle against the voter-ID law but lost the war because of the confusion over the law.” From the beginning, South Carolina Republicans displayed a cavalier attitude toward those voters disenfranchised by the law. “Find me those people that think that this is invading their rights,” said Governor Haley, “and I will go take them to the DMV myself and help them get that picture ID.” Transporting the 178,000 registered voters who lack a voter ID to the DMV would take Haley seven years, four months, three weeks and five days, Think Progress calculated.

Such confusion is no accident, opponents of the law say. The measure was passed to target black voters who disproportionately lack a voter ID, says Bakari Sellers, a black Democrat who served in the South Carolina House of Representatives from 2006 to 2014. “Race was at the heart of this. After Obama was elected, there was a fear of many more brown people and persons of color showing up to the polls.”

South Carolina has a long history of nasty racial politics, from the Civil War to Strom Thurmond, and the voter-ID debate was no exception. Members of the South Carolina Legislative Black Caucus walked out of the legislature when the bill was first considered. After the law passed, Ed Koziol, a Republican supporter of the law, wrote an e-mail to the bill’s author, Representative Alan Clemmons of Myrtle Beach, saying that if African Americans were offered a $100 award for obtaining voter ID, “you would see how fast they got voter ID cards with their picture. It would be like a swarm of bees going after a watermelon.”

“Amen, Ed. Thank you for your support of voter ID,” Clemmons responded.

The racist rhetoric supporting the voter-ID bill occurred before the killing of Walter Scott and the murder of nine churchgoers in Charleston brought national attention to the enduring problem of racism in South Carolina. Many Republicans in South Carolina have not moderated their views: Seventy percent of Donald Trump supporters said they wish the Confederate Flag was still flying about the statehouse, 38 percent wish the South had won the Civil War, and 20 percent disagree with fleeing the slaves.

A toxic mixture of racial politics and voter-fraud hysteria led to the law’s passage. South Carolina Republicans repeatedly made absurd claims about fraud to justify the measure, claiming that 900 dead people voted in the 2010 election. “We know for a fact that there are deceased people whose identities are being used in elections in South Carolina,” South Carolina Attorney General Alan Wilson said. “We must have certainty in South Carolina that zombies aren’t voting,” Clemmons added.

But an investigation by the South Carolina Law Enforcement Division “found zero cases of illegal activity,” according to the Columbia Free Times. In court filings, the state “did not include any evidence or instance of either in-person voter impersonation or any other type of fraud,” DOJ noted.

“The misinformation, the hateful rhetoric, the lack of sympathy in this debate, it still infuriates me to this day,” Sellers says. “There’s no recognition that people were died and beaten for the right to vote.”