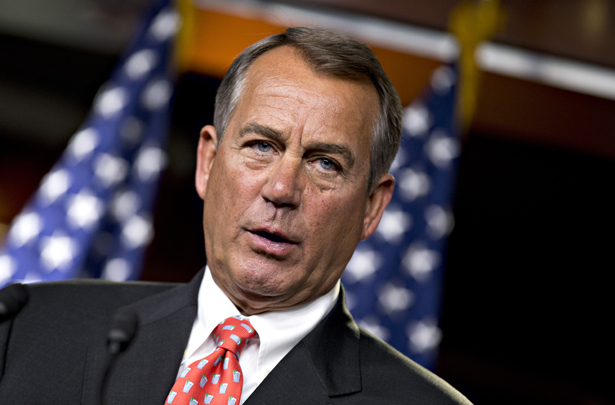 After months of haggling, the Senate finally passed a five-month extension of long-term unemployment benefits on Monday, retroactive to their expiration at the end of 2013.

The lapse has already cost the economy nearly $5 billion in the first quarter of 2014, as 2.4 million jobless struggle without badly needed checks. Long-term unemployment is at all-time highs in forty-one states, while the share of jobless Americans receiving aid is at an all-time low.

But it doesn’t seem the House of Representatives will act any time soon. Speaker John Boehner and his top lieutenants have made it clear they are not receptive to the Senate bill.

Why? Actually, it’s hard to figure out. Republicans have given myriad and evolving reasons for opposing an extension over the course of this debate, from saying the checks were no longer needed, to saying it must be paid for, to claiming the very nature of the program is immoral.

We have compiled a timeline of the GOP’s reasons below. If you have any more—or can actually determine an underlying logic—let us know.

They Just Don’t Want To. (December 3, 2013) “I don’t see much appetite on our side for continuing this extension of benefits,” said Representative Tom Cole, R-OK. “I just don’t.”

The Benefits Actually Hurt the Jobless. (December 8, 2013) “I do support unemployment benefits for the twenty-six weeks that they’re paid for. If you extend it beyond that, you do a disservice to these workers.” Senator Rand Paul on Fox News Sunday.

It Makes America Vulnerable. (December 23, 2013) “Does it make sense for our country to borrow money from China to give it to the unemployed in America? That is weakening us as a country.” Senator Rand Paul to NBC News.

The Jobs Crisis Really Isn’t That Bad. (January 3, 2014) “But that’s the point, [the program] was meant to cope with an extraordinary situation. But that situation has been dealt with.” Representative Tom Cole, to Buzzfeed.

Because Democrats Want the Extension. (January 7, 2014) “Remember: These are the same folks who gave us the stimulus, who gave us tax increases, and who gave us Obamacare. All of it was done in the name of helping the little guy—in the name of greater equality. And what’s it given us? This mess.” Senate minority leader Mitch McConnell on the Senate floor.

Whatever This Means. (February 6, 2014) “The perception that I get from the Senate right now is: ‘Times are tough. We should make times tougher on our kids to make it easier on us, and then feel better,’” said Representative James Lankford, R-OK. “And I think that’s just not a philosophy I’m willing to support.”

A Benefit Extension Would Be Wicked. (February 5, 2014) “I believe it is immoral for this country to have as a policy extending long-term unemployments [benefits] to people rather than us working on the creation of jobs.” Representative Pete Sessions on the House floor.

No, Seriously, Unemployment Isn’t A Problem. (March 13, 2014) “The extended unemployment benefits by the administration were to be in place until unemployment came down,” said Representative Tom Price. “Unemployment is down.”

It’s Too Late. (March 19, 2014) After months of GOP delay in the Senate, Boehner and Republicans on House Ways and Means now argue the extension is “unworkable” and “can’t be implemented,” since states would supposedly have trouble distributing retroactive benefits. House Democrats say these are “relatively minor concerns.”

We Have to Approve Keystone XL and Repeal Obamacare First. (April 8, 2014) “As the Speaker said months ago, we are willing to look at extending emergency unemployment insurance as long as it includes provisions to help create more private-sector jobs—but, last week, Senate Democratic leaders ruled out adding any jobs measures at all. The American people are still asking, ‘Where are the jobs?’ and House Republicans are focused on our jobs agenda for families and small businesses,” said Boehner spokesman Michael Steel.

Because of Benghazi. No Republican has actually claimed this. Yet.